The new Mercedes EQS gets in the hands of the former Formula 1 World Champion, Nico Rosberg. How does he manage to get around Monaco with the electric luxury sedan?

Nico Rosberg has always been the supporter for sustainability and e-mobility. Even though he lives in the land of the rich and owns, among others, a classic Mercedes-Benz 300 SL Gullwing, he mostly drives around in an electric smart.

“For me it is the first car where you don’t feel you compromise any more”, he says.

With a drag coefficient of only 0.20, the EQS is the yet unofficial record holder of aerodynamic value for a series production car. 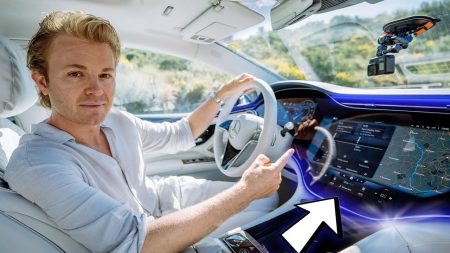 Door handles pop out when the owner is around. The interior lightens up immediately and the Hyperscreen shines bright revealing an out-of-this world interface. Three displays come together, almost seamlessly, beneath a glass cover, making up for 141 centimeters of screens.

Vivian, Nico’s wife, and the “CEO” of the family, shows up and gets in the passenger seat for a couple of minutes. She is very much impressed to hear that this car drives over 700 kilometers between charges.

Nico Rosberg, shocked by the ultra-smart features of the Mercedes EQS

Augmented Reality shocks the man who has been on the race track, dealing with futuristic technologies for most of his life.

The smart navigation displays the fast charging stations, but fails to identify a last-minute tunnel road closure. Therefore, Nico Rosberg must turn the Mercedes EQS in the tightest space. With a 10-degree rear-wheel steering, the electric sedan is perfect for the narrow streets of Monaco and Monte Carlo.

In the EQS, he finds the usual S-Class-style comfort. Once he tells the MBUX system that his back is hurting, the system turns on the massage function.

In the acceleration test, the car hits 100 km/h in little over 4 seconds. A high-speed ride secures absolute silence onboard. Quite surprisingly, the bonnet cannot be open. Under there, there is an ultra-efficient air filter, that operates against bacteria, viruses and over 99.65% of particles of all sizes