The winner takes it all. And gives it to his girlfriend. Or girlfriends. Who’s counting, anyway? Floyd Mayweather has just won the fight of the century against Manny Pacquiao and gave long term girlfriend a Mercedes-Benz.

Finally face to face with his all-time rival Manny Pacquiao, the American boxer dictated the pace in the MGM Grand Arena in Las Vegas, using his jab. His defense made Pacquiao consistently miss his target (the Philippino only landed 19% of his punches) and counterattacked his opponent with his right hand constantly throughout the fight. Mayweather won the battle in the boxing ring via unanimous decision with scores of 118–110, 116–112 and 116–112 in his favor. 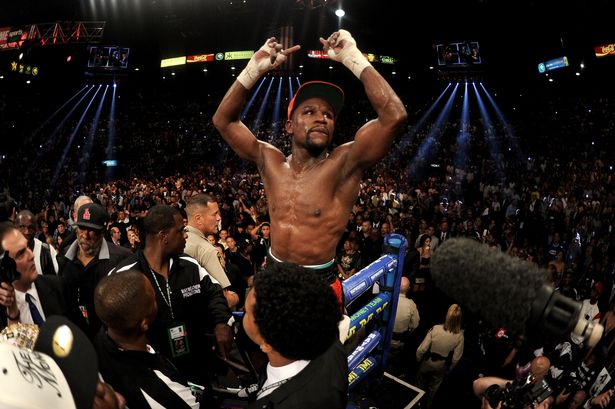 All these figures brought him money that seem uncountable. For every minute spent in the boxing ring, Floyd Mayweather got $8000. We know, our jaw dropped like that, too! Together with his sponsorship deals for the Las Vegas gig, Mayweather got $180 million. So buying presents for his loved ones is just pocket change.

One of his girlfriends, Liza Hernandez, posted a photo of her and a Mercedes-Benz GL on her social network profile, with a gigantic red ribbon wrapped around it. The media immediately took action. Rumours claim that the wagon is nothing but a gift from her filthy rich boyfriend, Floyd Mayweather.

Liza is a former model from Panama and now she drives the white Benz with chromed details, that can accommodate up to 7 people. In this layout, the car is estimated to cost approximately $100 000. We bet Floyd Mayweather won’t miss the money much.

Did you know Floyd Mayweather’s favorite car is a classic Mercedes? Watch the video of him driving his classic, right here!