First time in 20 years, Mercedes-Benz A-Class is coming to the U.S.

The Mercedes-Benz A-Class has been around for 20 years, but the Stuttgart brand refused to ship it to U.S. “It is not the right market for our compact”, they stated. But now they turn around 360 degrees. The future 2018 A-Class sedan is bound to cross the Atlantic, a first in the model’s lifetime.

Positioned below the CLA 4-door coupe, the A-Class sedan is slotted as the company’s most affordable model. When the CLA arrived in the U.S., it was priced just below $30,000, which makes car dealers hopeful of getting a very affordable sedan in the shape of the new A-Class, a model that target millennials. The A will ride on the MFA platform together with the CLA, the GLA and the B-Class.

Making its debut in 1997, with the W168 generation model, the A-Class was the very tall upright hatchback, featuring innovative technology and engineering, which permitted the construction with short overhangs for larger interior space. It was a car that screamed “Europe”, meant for the cities where parking is a headache. 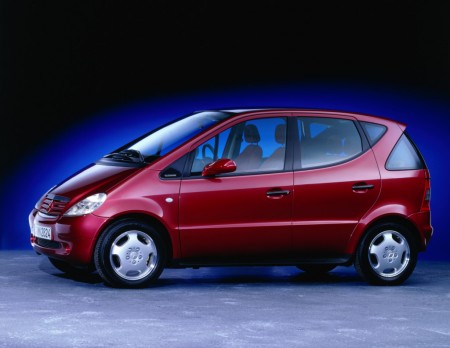 The W168 sold well, even though Mercedes had to deal with a big step backwards: they had to recall all first edition models after a few weeks on the market in order to revise their suspension and fit them with stability control systems. All because journalists in Sweden rolled one car in an elk avoidance test.

Being born in a segment that simply does not exist in the States, the A-Class stayed away from the territory that was in high demand of pick-up trucks and SUVs.

Sporting the company’s old-and-new Panamericana radiator grille, the future A-Class sedan is will hit the showrooms next summer.