The Mercedes-AMG E 63 S 4Matic + is ready to rock the super-sedan arena with 612 hp. But is the strongest E-Class only a hero for straight lines or a true driver’s car? First test on the Portimão race track via auto-motor-und-sport.de.

“If there was one point you were not allowed to criticize the old DTMs at AMG for as a race driver, it was that you had too little engine power. We have always had enough engine power at AMG. We are a benchmark, “says Bernd Schneider, five-time DTM champion and today’s AMG brand ambassador. What does “enough engine power” currently means? 612 hp. Welcome to the Mercedes-AMG E 63 S 4Matic +, the most powerful E-Class ever.

Full-throttle, sixth gear, at 258 km / h, the new power limousine sniffs the 835-meter-long start-finish straight line of the race track in Portimão lightning fast. Instead of the 585 hp in the previous model, 612 hp now tear the E 63’s tires – all four of them, as the E 63 S now comes with 4Matic+ AWD traction. From now on, it scores with 850 newton meters of torque (previously no more than 800 Nm), which are available from 2500 rpm. The heart of the power supply is no longer the 5.5-liter V8 biturbo but the four-liter V8 biturbo known from the GT supercar and the C 63. In the E 63 the engine is carrying two twin-scroll turbos for the first time. In addition, new pistons, a modified air intake and charge air cooling as well as another mapping are used. 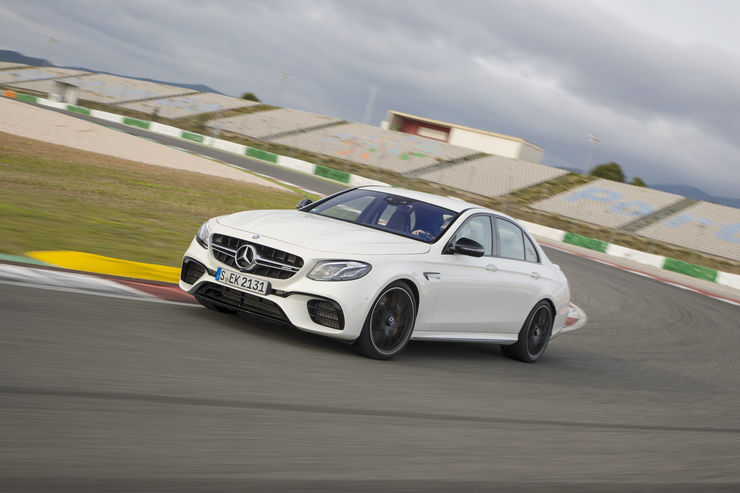 When braking in the first corner of the 4,684-kilometer circuit, the E 63 secretly conceals its limousine character. AMG will no longer be the benchmark for engine performance alone. The team from Affalterbach also attaches great importance to driving dynamics in the new E 63.

ESP off, Race mode activated – the E 63 not only features a pounding V8 beat, but also a sportier shifting strategy for the new transmission, in the sportiest of all driving programs (Individual, Comfort, Sport, Sport +, Race): the automatic changes speeds with shortened shifting times – either automatically or manually by pulling the rotating rockers on the steering wheel. 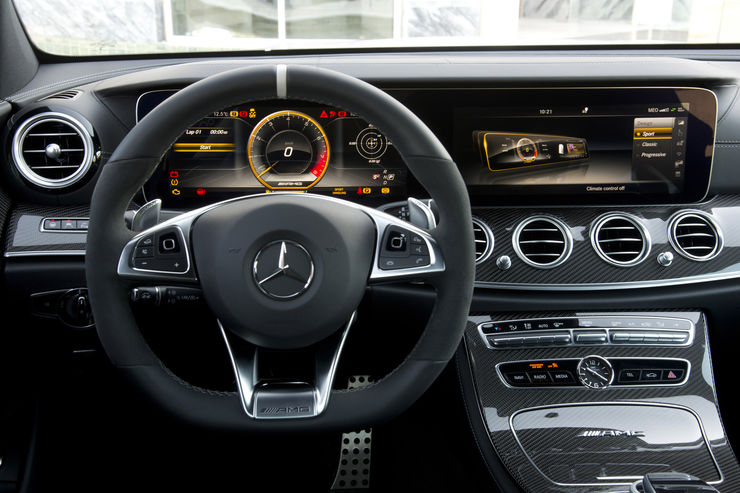 The automatic has now not only two additional gears, but also uses for the first time a wet starting clutch, which replaces the previous torque converter. By the way, the launch control function does not have to be activated by complicated confirmation via the shift jacks. Instead, is sufficient to kick the brake and push full throttle. Then release the brake and experience a traction spectacle. The factory specification of 3.4 seconds from zero to 100 km / h appears to be convincing even without a measuring device. 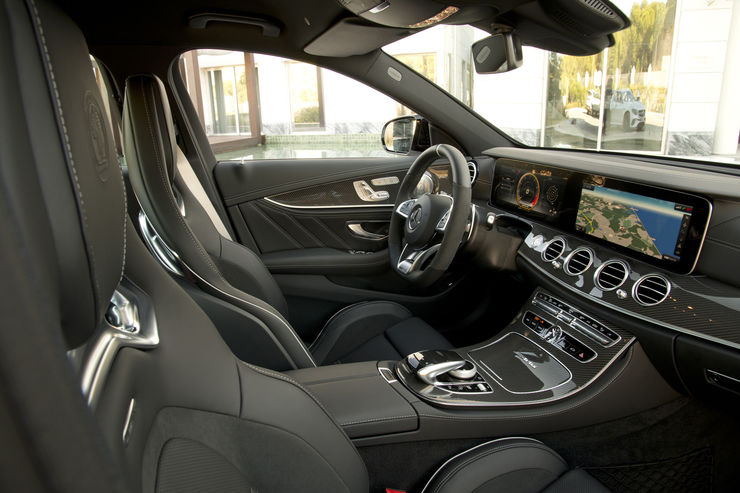 In addition to the shift strategy of the transmission, the throttle response, the four-wheel and damper adjustment, the setup of the electromechanical steering can also be influenced. In the Sport + and Race modes, a sporty, tight turning cycle is required, while in Comfort mode, thanks to more steering power support, it works more smoothly. In race mode, the steering system convinces with precise feedback around the center position and not too much steering angle requirement. Overall, the steering fits well with the character of the sporting limousine and does not seem artificially exaggerated. 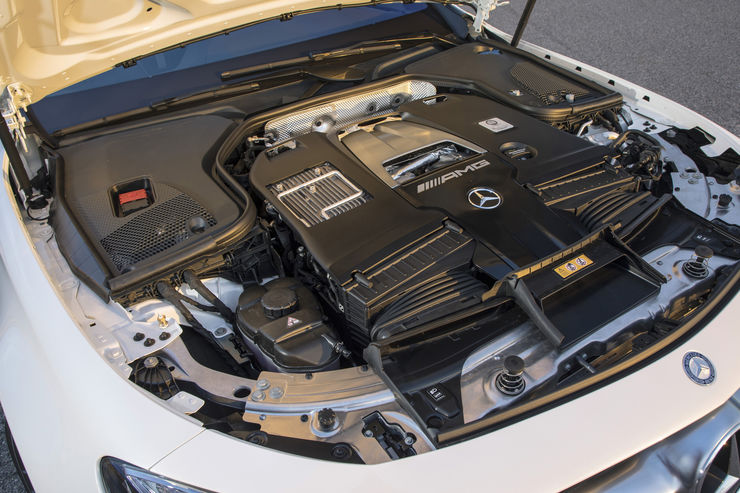 AMG developed a completely new sports suspension for the E 63. In addition to the newly designed front and rear axles, the E 63 has, among other things, independent wheel carriers as well as more negative camber. Thanks to special rubber pads and the newly tuned “elastokinematics”, the stiffness has been increased by 30 percent compared to the previous model. The spring-damper setup of the air suspension has been specifically designed for the E 63. Three different spring rates can be set by pressing the button on the center console or by selecting the driving program.

“The car moves incredibly precise,” says Bernd Schneider, and the driver does not have to exaggerate at all. Regardless of whether it is braking, turning or under load – the E 63 nods and rolls for its vehicle class surprisingly little. By selectively hardening the spring rate on the front and rear axles, the E 63 automatically counteracts wobbling and pitching movements within the limit range. The standard, dynamic motor bearings minimize the vehicle movement and vibrations. 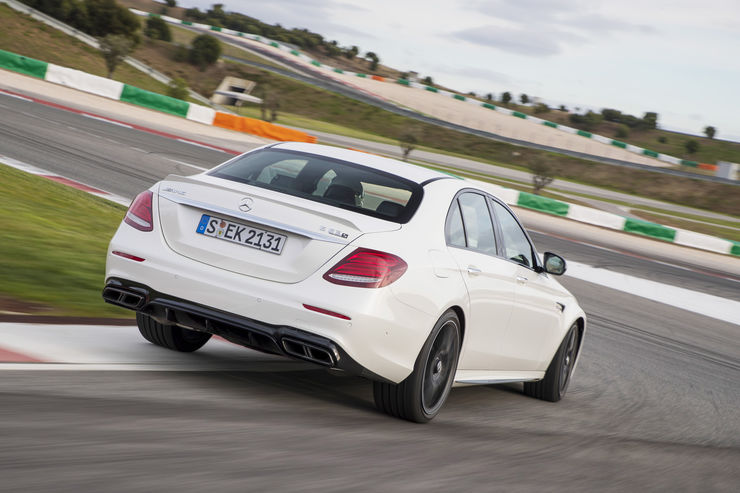 In short, you forget that you squat in a 1880 kilos sedan. However, physics can not be exerted in the muscular E, of course. If you set the braking point very late, the E 63 reminds you that it is not a racing car. The power-limo also comes well around narrow corners, unless one is too aggressive. This is because the 1.9-ton vehicle weight will also gain the upper hand.

Curve three, a narrow bend. Here the E 63 presents its most striking innovation: a newly developed all-wheel drive system with fully variable torque distribution on the front and rear axle. At the top of the pendulum, it is possible to apply a progressive load – first, the system spreads the force slightly backwards for more agility through the curve. Afterwards, the all-wheel drive distributes the driving torque on the uphill acceleration for maximum traction, then presses the rear under load again slightly outward. From now on, all-wheel drifting is possible when accelerating. The rear can be moved very precisely under load insert. On a coarse kick on the accelerator pedal, the back counteracts spontaneously. If you are able to move your gas foot progressively, you can measure the angle of the tail movement. Similar to the C 63 and GT, the 612 hp strong E 63 4Matic + carries a an electronically controlled rear axle differential. 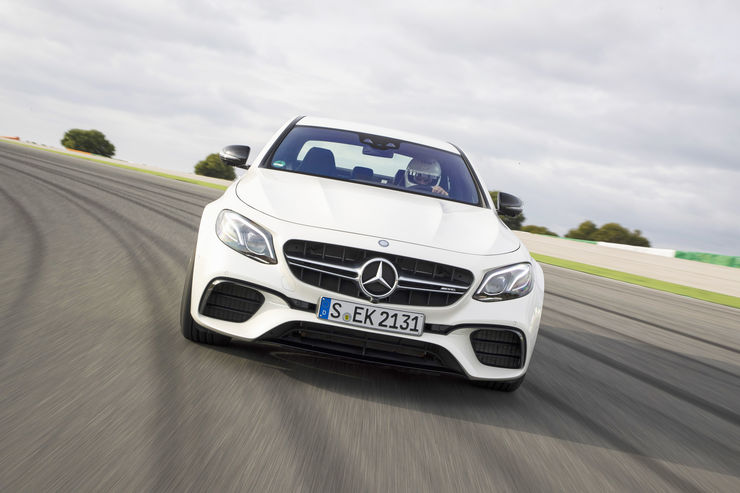 Yes, the E 63 is a real “driftmobil” with rear wheel drive. Officially the torque hero is offered only with all-wheel drive, but the engineers have developed a fun sub-function called “drift-mode”. “This makes the E 63 a rear-wheel drive car. The all-wheel drive remains in stand-by and the 850 Newton meters are then sent towards the rear axle,” says Oliver Wiech, Head of Development Mercedes-AMG. Oh yes, the latter we can confirm. Regardless of whether four-wheel drive or rear-wheel drive, the new Mercedes-AMG E 63 S is uber fun. Mercedes-AMG does not, however, revealed what the new power limo will cost (from March 2017).