The G-Class stands for outstanding off-road capabilities, but not for luxury and comfort. Now there is a G-Wagon from Maybach, which also combines its luxury features with a convertible top for the rear. Auto motor und sport has driven the Mercedes-Maybach G 650 Landaulet.

The pictures are impressive, but the first encounter is frightening. The spare wheel at the rear measures about 92 centimeters in diameter and is mounted so far up that the 325-tire on the 22 inch rim loosely surpasses the tester’s 1.84 meters. The height of the upper spare wheel rim corresponds to the distance of the body to the asphalt.

The reason is a construction, which can only be found on the Unimog: portal axes. They are characterized by wheel carriers, in which the drive shafts above the wheel center engage in a toothed rim, so that they do not limit the ground clearance in the sense of maximum off-road capability. 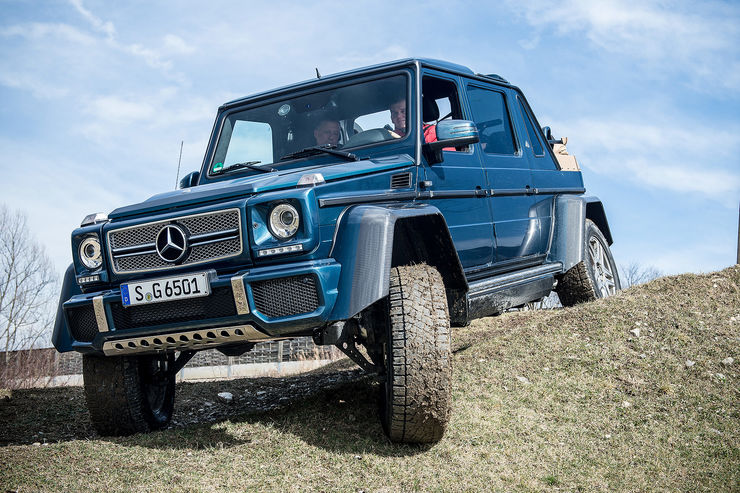 The few Maybach customers certainly need this. But what they probably estimate is the side effect of the respectable height of about 2.24 meters. If you spend 749,700 Euros on a car, you are probably used to looking at the world from above. To ensure that the Landaulet does not look like a high-rise, Daimler has stretched the wheelbase by about 60 centimeters to around 3.43 meters, so that the overall length is now at 5.35 meters.

If the passengers do not want to be overlooked, for example, on the red carpet, they can open the roof over the back, and when they sit upright, the audience can also recognize them when they greet them with respect. But later on. We definitely want to drive the 3.3 tonne presence granate. 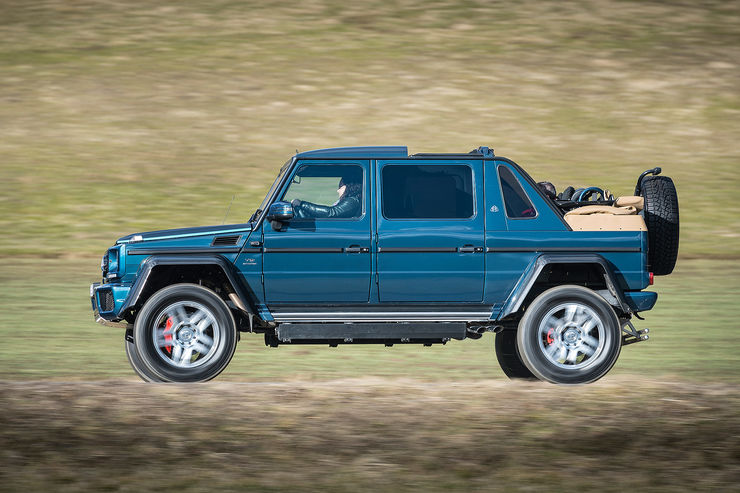 High level – not just in price
The chassis lifts the driver’s seat at truck level. Nevertheless, the G-Class passengers do not have to climb. If you push the door knob and pull the handle (yes, door closures from the G-model, since 1979), a footboard moves towards you – according to the motto “It drops for you: the level”. In fact, the electric sill does not look particularly classy and the LED lighting integrated does not quite meet the expectations of a Maybach. Do mind the sticker with the weight limit 120 kg. The interior is not higher than in the normal G and also longitudinally offers no more space. Especially since behind the driver’s seat a glass partition separates the rear at the push of a button.

The chauffeur finds in the Maybach G 650 a chic furnished workplace and great prospects: conventional Mercedes instruments, much leather and thanks to the almost vertical standing windscreen a good overview at least over angular front. Looking backwards, a rear-view camera intervenes, which throws the picture on the free-standing monitor. The gorgeous steering wheel in two-color leather is in typical G-Class fashion somewhat flat. 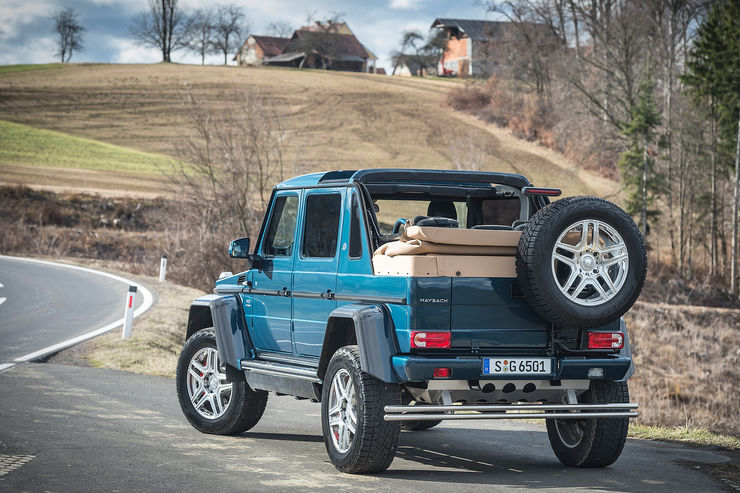 52.5 hp – per cylinder
The powerful 6.0-liter biturbo V12 under the bonnet starts unobtrusively and falls into a vibration-free idle. The selector lever is similar to that of the AMG GT, which in the giant terrain monster initially amazes. Also the engagement of the driving stage “D” remains unspectacular. Then the Maybach rolls, without any gas, smoothly and effortlessly. You are almost disappointed because you are expecting some kind of challenge that you have to overcome in order to set a powerful car in motion. After all, the accelerator pedal is slightly heavy. But the V12 pushes effortlessly the weight-heavy chunks, from 2,500 rpm the lush, sullen sound of the V12 is rockier, a hoarse undertone betraying the ample resources of 630 hp and 1000 Nm. The acceleration of less than six seconds to 100 km / h is dramatic from a truck perspective.

The test ground in Graz soon requires delay with the confidence-inspiring brakes and a maneuvering machine in a limited space – although this assessment is relative. As a precaution, I am a little farther off, but I must go back, because a half-high post disappears to the right behind the end of the bonnet, exactly in the area where I would locate the certainly sinfully expensive fender extensions of carbon. No matter, the steering is easy, if not straight, but also run is easier than feared. On the straight line, the engine shows that it can also be different and the steering holds with, as the Landaulet follows the given route well. 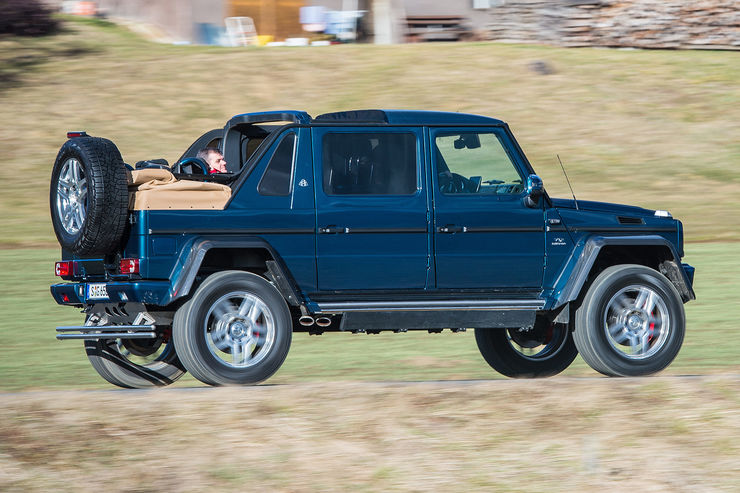 Outstanding suspension comfort
The stretch of the course will leave the Maybach-Offroader astonishingly unimpressed, all in supreme comfort. The 32.5-centimeter-wide rubbers may have their share in this thanks to a moderate cross-section (325/55 R 22). But most of it has to come from the chassis. Gunnar Guethenke, head of the Daimler product range, said: “We have been working for a long time to get the information that comes from the front adaptive dampers well from those on the rear axle. This is only possible in the driving test. For this, we spent a lot of time as passengers in the rear of prototypes. The space behind the front seats was by then not much more than a wooden box without windows and no windproof, but nevertheless with the comfort seats of the production car. This was exhausting, but it was worth it. We were able to refine the car. The suspension comfort that we have achieved so well, with a stiff axle, will make our customers feel good and appreciate the G 650 “. The effort was worth it.

For the photo I drive a circle with admittedly lush radius. Sure, the G 650 builds up side tilt, but that does almost every car. That it feels more, is mainly due to the seat height. A fast slalom is certainly not the favorite discipline of the Landaulet, but in normal curves with highway speed, no one has to worry – assuming the road width fits: The G 650 is 2,10 meters wide. 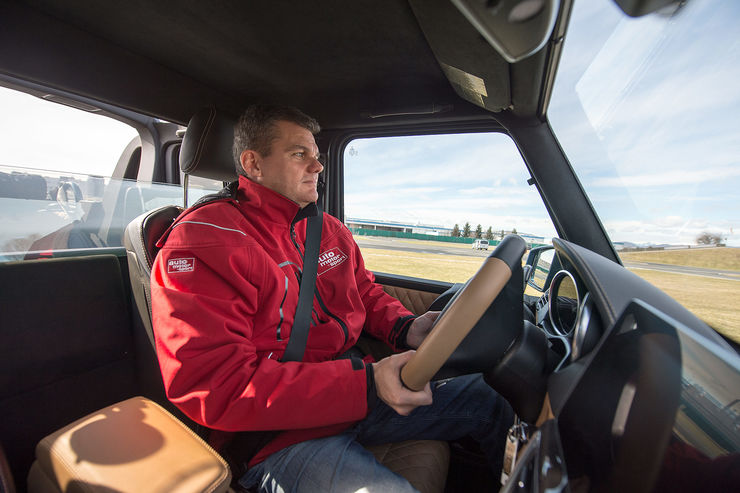 Offroad a real G despite long wheelbase
The test route has roughly the cross-sectional profile of a cuboid, consists of earthy gravel and is sparsely covered with grass, which is moist in the cool morning sun of the early March. As an off-road layman, the survey is immediately qualified as an obstacle to be circumvented – there is not much time. This is not true for a G-Class, even if it has more than three meters of wheelbase. My co-driver always leads me where I would not go in any case and activates the center differential via the center console. Just wait for the green lamp, down from the brake, give the throttle – that’s it. At the cross-country descent from the terrain hill, only the whistles of the drivers responsible for the car prevented us – presumably they had only concerns about the driver. 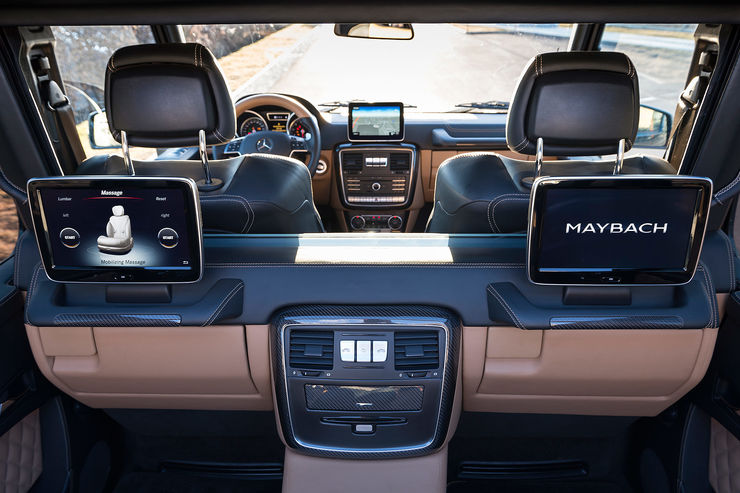 Open luxury in the rear
He can then try out the back seats, after all, it is mainly about a Landaulet. The S-Class first-class seats are generously covered with Designo leather, which extends over much of the rest of the interior. On the armchairs is a lovely soft flock cushion (of course with leather cover) and also the headrests are fully upholstered. This must be so, because the backrests can be moved back so far that it feels incredibly decadent. Wow! The coronation is now natural when the electric folding top lifts up behind the seats to reveal the blue sky or its surroundings. Too cold, which strengthens the effect of the seat heating with the hot stone massage, which can be configured by remote control on the 10-inch monitor on the glass partition wall. 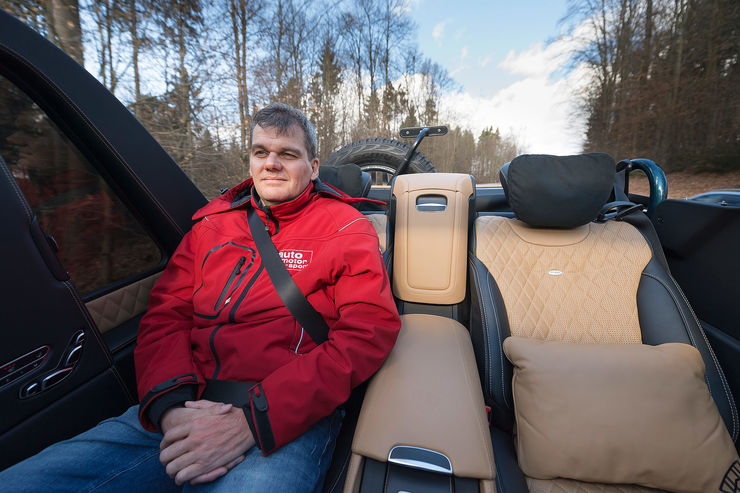 Conclusion
The Mercedes-Maybach G 650 Landaulet meets the expectations. Besides agile, economical and inconspicuous, it can do everything: mega-comfortable gliding, climbing through heavy terrain and making an impression. The search for the hair in the soup is difficult. Ok, with the sparse temperatures in the spring the driving winds a little too cool around the nose and the distance to the switches in the spacious rear open: The belt is too short. Of course, the developers also noticed this: a longer belt is just as much in preparation as is a spoiler for the roll-over bar, which should have a similar effect as a wind chute. That would not fit the Landaulet.