FIRST TEST Mercedes GLS 580 4Matic. Can size trump anything? The third generation of the Mercedes XXL SUV, the GLS, is too big for many parking spots. Never mind – there is never enough appetite for size and luxury, especially in the U.S., China or the Middle East.

The GLS, produced in Tuscaloosa in the US state of Alabama, will go on sale in November and have a starting price of 85,924 euros (Germany). This is about 15,000 euros more than for the comparably motorized sister model GLE, which is about 30 centimeters shorter. For the base price the giant is sold in GLS 350 d guise with a 3.0-liter diesel and 286 hp – enough for a top speed of 227 km / h and a mixed consumption of 7.6 liters. Alternatively, Mercedes offers the same engine for 90,386 euros as the GLS 500 d with more adequate 330 hp (peak speed 238 km / h, consumption also 7.6 liters) or – a little later – with the not yet priced V8 petrol engine as in the test car. The appearance of a Mercedes-AMG model is only a matter of time and the plug-in hybrid is too.

The “S” in the abbreviation GLS is a bragging point for Mercedes, who calls the GLS the “S-Class among the SUVs”. Not only in size and price, but above all in comfort and features with all the luxury appointments you can find in the big saloon, too. “We did not want to make any compromises in the back either and we paid the same attention to the passengers in the rear as those in the front,” Mercedes PR says. 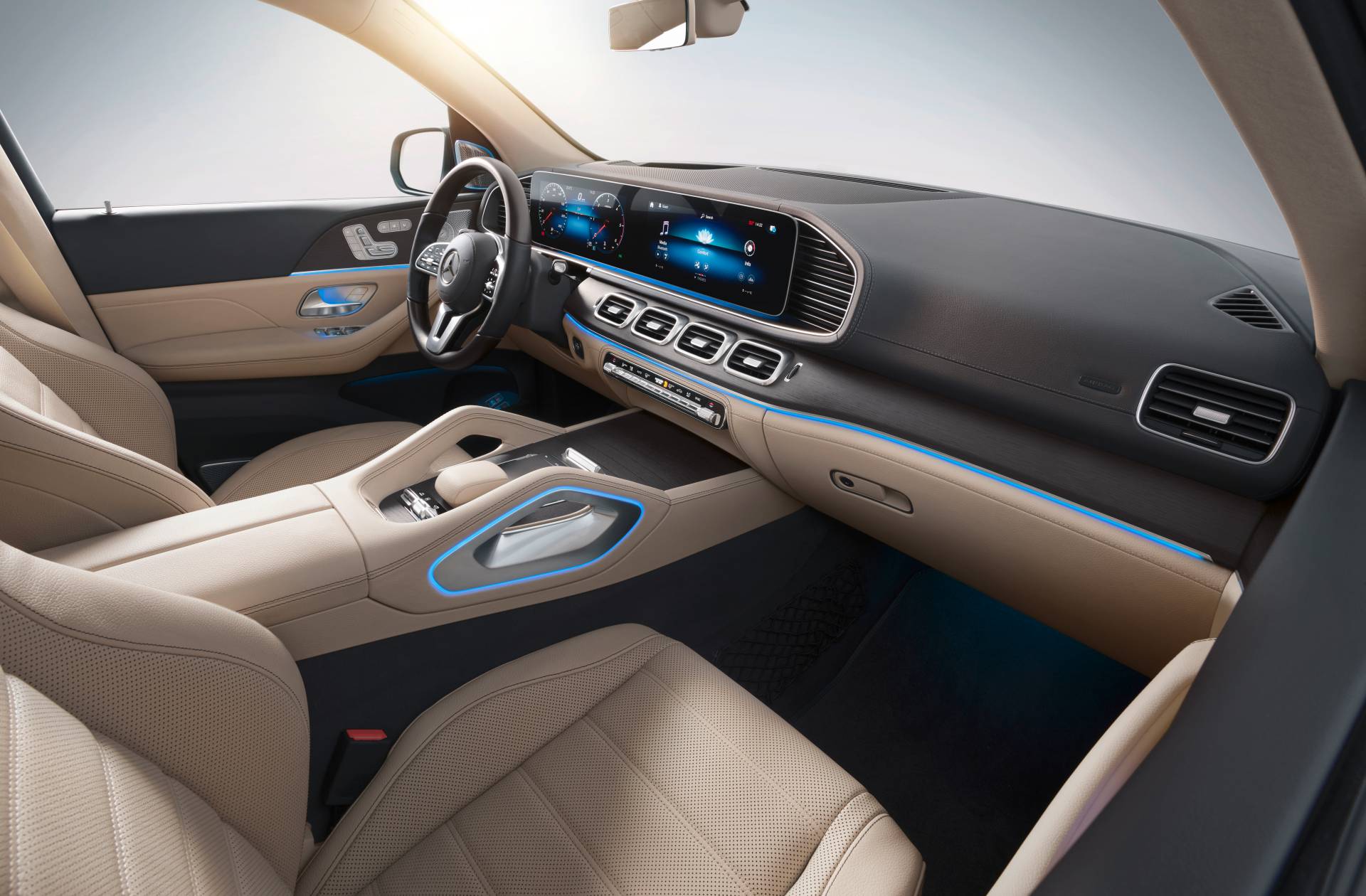 Indeed, the GLS feels a bit like being behind the wheel of the S-Class, with all the varnish and leather all around, the two large screens in landscape format in the cockpit and the many helping gagdets for the driver – from the air conditioning massage seats to the cooled cup holders.

The price is paid in narrow car parks or winding old towns, even if cameras and sensors simplify maneuvering. But country roads and highways relativize the size and the GLS works just fine despite its 3.14 meters wheelbase and 5.21 meters in length. On the one hand, this is due to the e-ABC suspension controlled by 48-volt electric motors, which reads the road with cameras and adapts the air suspension in advance to any pothole or road. With every turn through the bends, the driving pleasure increases.

That’s also because of the engine. Under the bonnet of the Mercedes GLS 580 test car lies an evolved V8 gasoline engine, which is the first engine of its kind to feature an electric starter generator. Thus upgraded to the mild hybrid status, the 4.0-liter bi-turbo engine regains effective energy and allows longer start-stop periods to slightly lower fuel consumption. 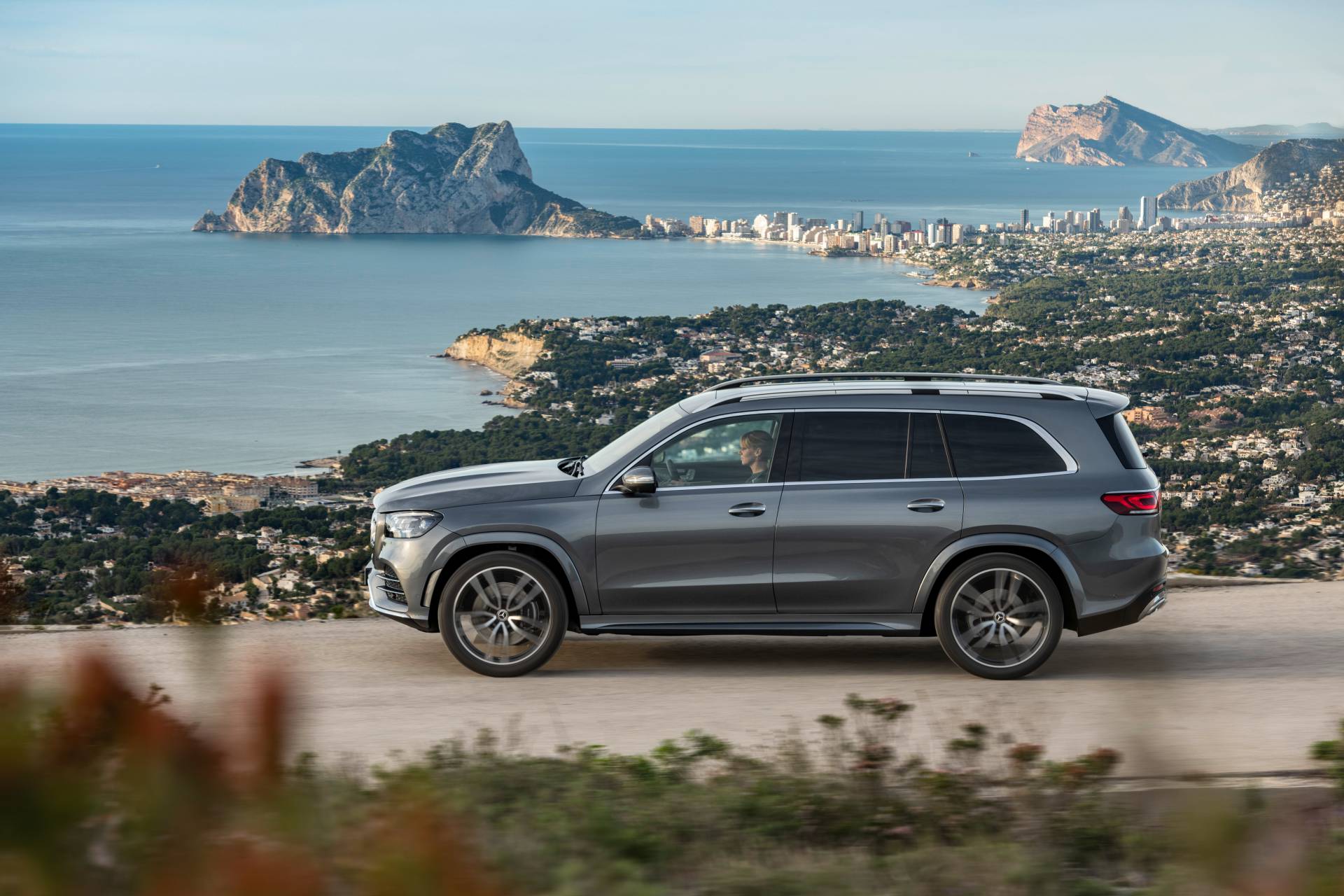 In addition to the 489 hp and 700 Nm torque provided by the thermal engine, an additional 22 hp and 250 Nm is offered by the electric starter and helps you forget of the many kilos the GLS weights. When the GLS storms to 100 km / h in just 5.3 seconds or reaches 250 km / h at full throttle, there is no sign of more than 2.5 tons. In curves, the colossus is very easy to handle too.

Passengers in the rear of the GLS have more freedom than in any other Mercedes SUV. Knee room in the second row, for which Mercedes offers two single seats with easy access or a fold-down seat, is actually as good as in an S-Class. Behind it, there are two veritable armchairs on which adults can endure a few hours. All seats are electrically adjustable, there are two climate zones at the back and a separate cup holder for each passenger.

As generous as it all is – in the GLS things are not as upmarket and feudal as in the top versions of the Range Rover, Bentley Bentayga or Rolls-Royce Cullinan. The seats are too simple and the leather is not fine enough. The GLS is designed as a family SUV for wealthy US soccer mums and dads and Chinese upper-class families, where practicality matters more. For all other friends of luxury SUV, the GLS will get soon a Maybach variant. 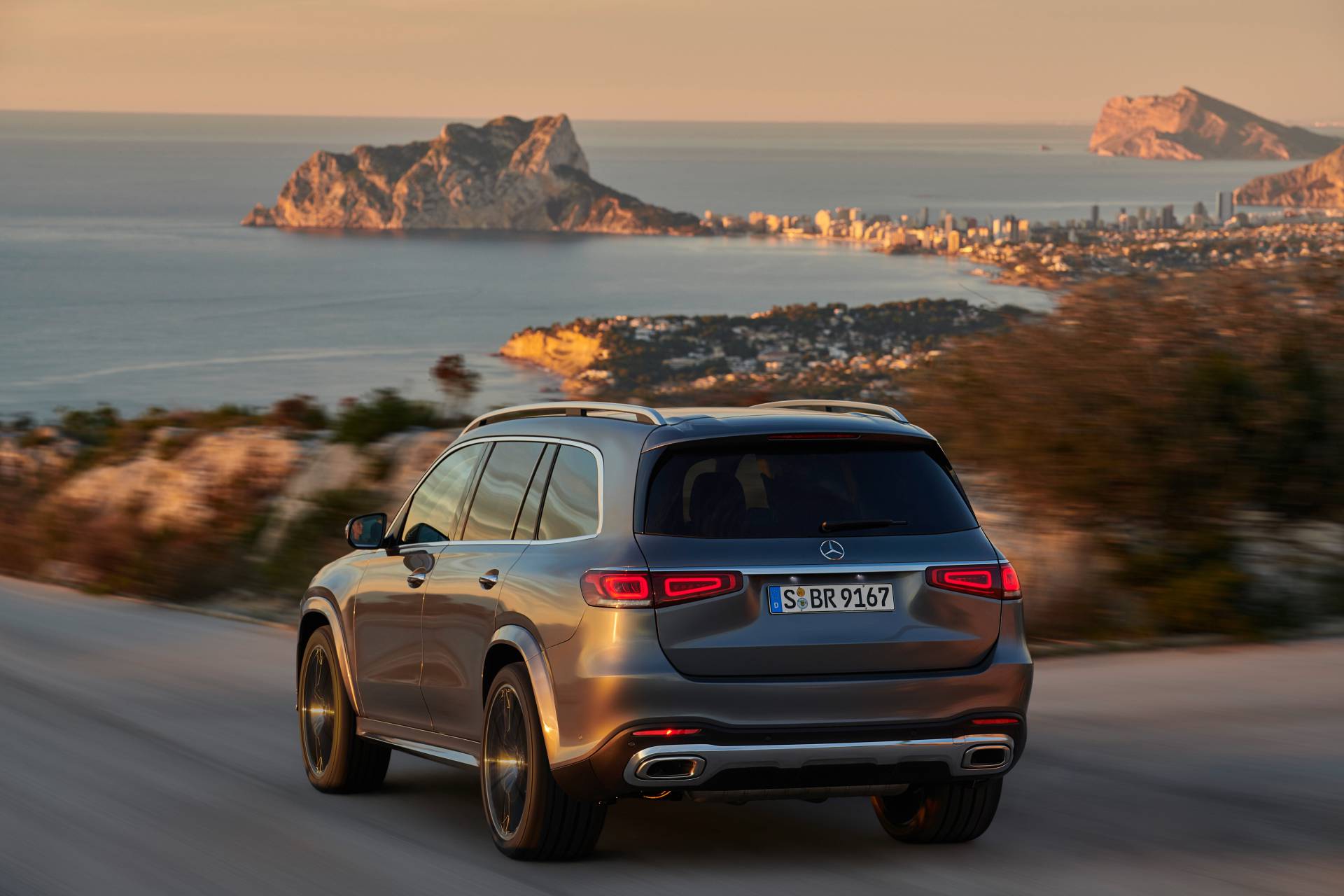