At this year’s Frankfurt motor show, Mercedes presented the GLE 350 de plug-in, which blends a diesel with an electric motor. The international media has already tested the new rechargeable Mercedes hybrid SUV and we bring you their impressions.

Mercedes GLE has recently been renewed. The previous one was derived from the ML from 2012 and had the oldest interior in the entire Mercedes family. On the outside, it is still unmistakably a GLE. It still has the powerful C-pillar, which is a signature since the first-generation ML was launched in 1998, but of course it has the new design language in the front and rear as the very latest SUVs.

Inside, there have been major changes. Now GLE has also got the big tablet with two 12.3-inch screens, but the decor, which it shares with the large seven-seater GLS, differs markedly from other models. The framing around the screens is different and is perceived to be more integrated and wider. The ventilation nozzles are square and the center console is characterized by two heavy handles – a kind of legacy from the second generation ML.

Right now there are exciting times for rechargeable hybrids. The Mercedes-Benz GLE 350 is perhaps the most exciting of them all. It combines the hybrid technology with the diesel engine. The previous generation GLE 500 e had a 3-liter six-cylinder petrol engine, but the new one gets the a turbo four-cylinder diesel with 194 hp and 400 Nm. It is combined with a 136 horsepower electric engine with a full 440 Nm, housed in the transmission tunnel. The total system power will be 320 hp and 700 Nm. 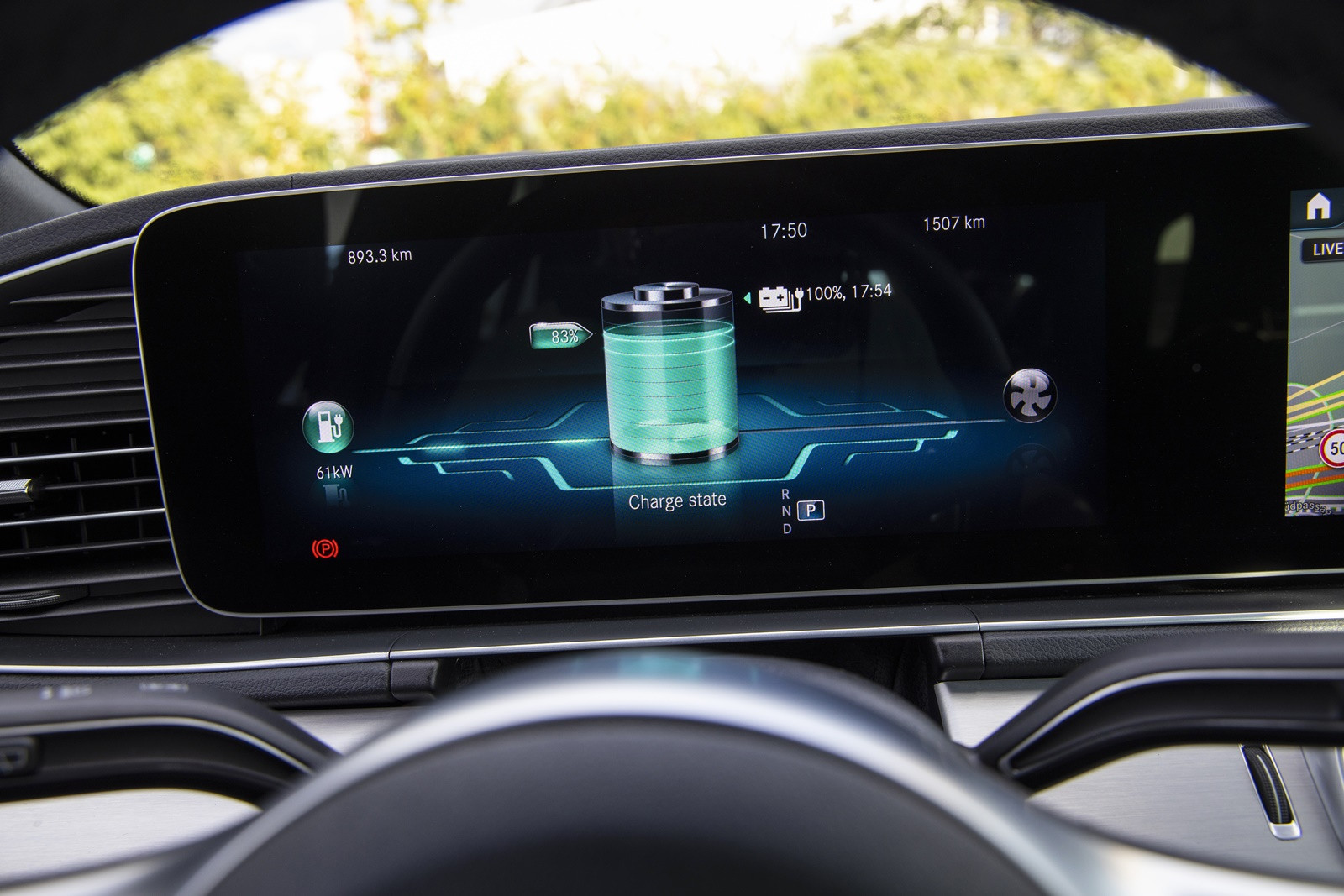 But it is the electric range that draws attention. It will run a full 90 km, measured by the WLTP method. This means that most people will be able to run fully electric on a daily basis. That is, if you can handle 136 hp electric power then.

The 31.2 kWh battery receives 7.4 kW via onboard charger and 60 kW on a fast charger, which provides fast charging speed – both on fast charger and at home charge. The battery pack – the double module from the hybrid A-Class – is installed under the load compartment, whereby the SUV fans are spared a step in the loading compartment. Visually, the plug-in hybrid does not differ either inside or out of its GLE brothers with diesel or gasoline engines.

Mercedes declares a consumption of 1.1 liters per 100 km, and for once we think most people will meet the same consumption, if not even lower. The test route included a well-traveled freeway, highway and queue through Frankfurt.

The car has a number of driving programs – really too many – that are controlled via the wheel for the driving program on the center console. You can choose between Offroad (engine running constantly), Eco, Electric, Comfort and Sport. The car starts automatically on electric power and prioritizes using it before switching to the diesel engine. Good thing, because in electric mode, the over 2.4-ton crossover makes a very balanced impression and presents itself not only by the impressively low noise level almost like a real electric car. 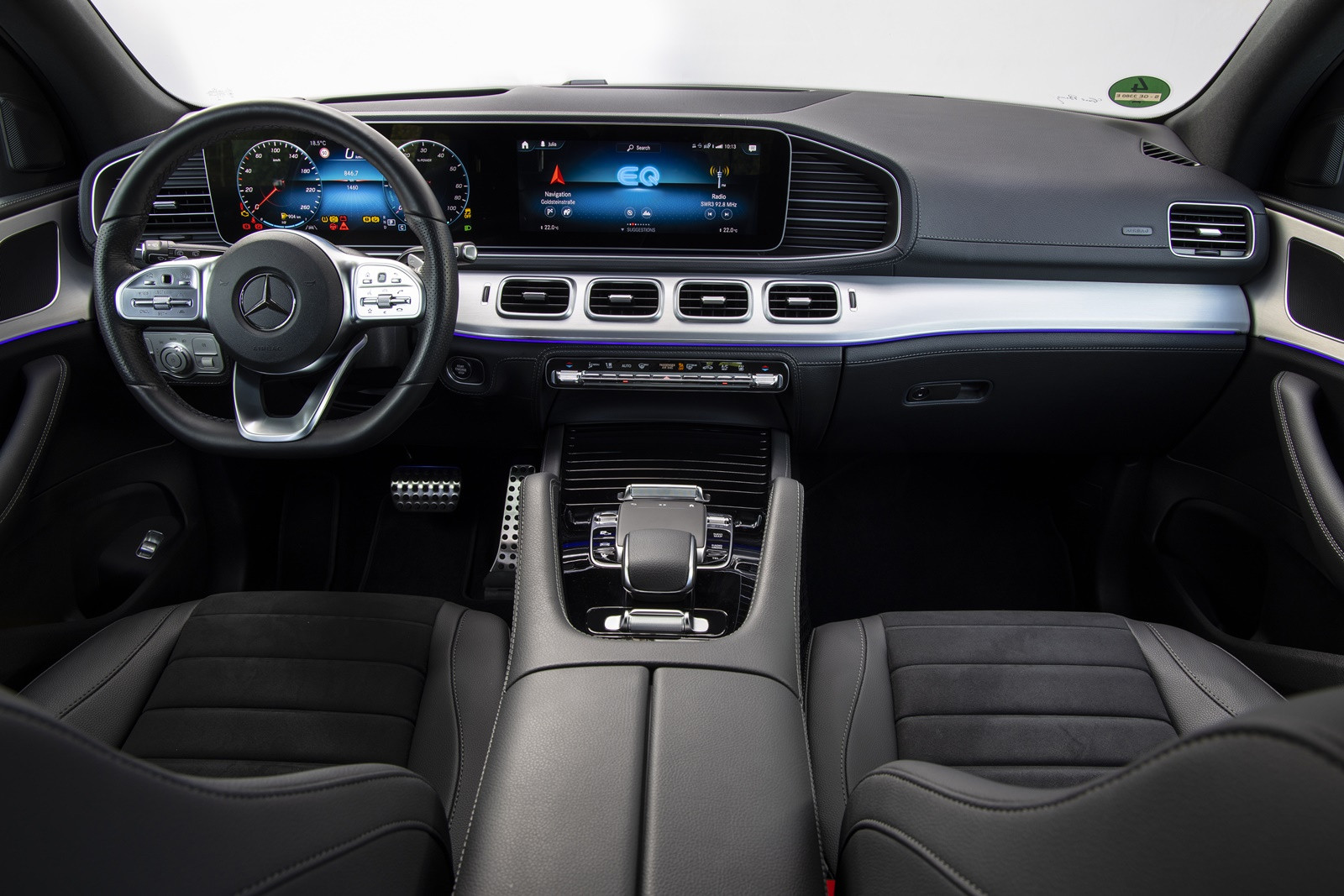 The diesel is switched on only when you are in the sports program on the road or accelerate particularly powerful in the intermediate sprint in the city or on the highway. There is a marked resistance in the accelerator pedal early in the pedal movement. If you stay within this, you wander silently in electric mode. The torque comes instantaneously, but it is not extremely fast when you just drive with the electric motor, but strong enough in most cases. 0-100 km/h takes about 16 seconds, so during accelerations out on the highway and the like it can be better to drive with some help from the diesel engine.

The engineers claim the GLE 350 de should be able to run up to 160 km / h on electric power alone, but the engine is weak on its own for such a big SUV. Although it uses the nine-speed gearbox to get it working at ideal speed. We never got it above 145 km / h on pure power. In other words, you can run electrically at all legal speeds – and yes, with the twin diesel and a moderate electric motor, this is not meant as a power SUV, but it can still manage the sprint to 100 km / h in 6.8 seconds and top 210 km / h with the diesel engine on. 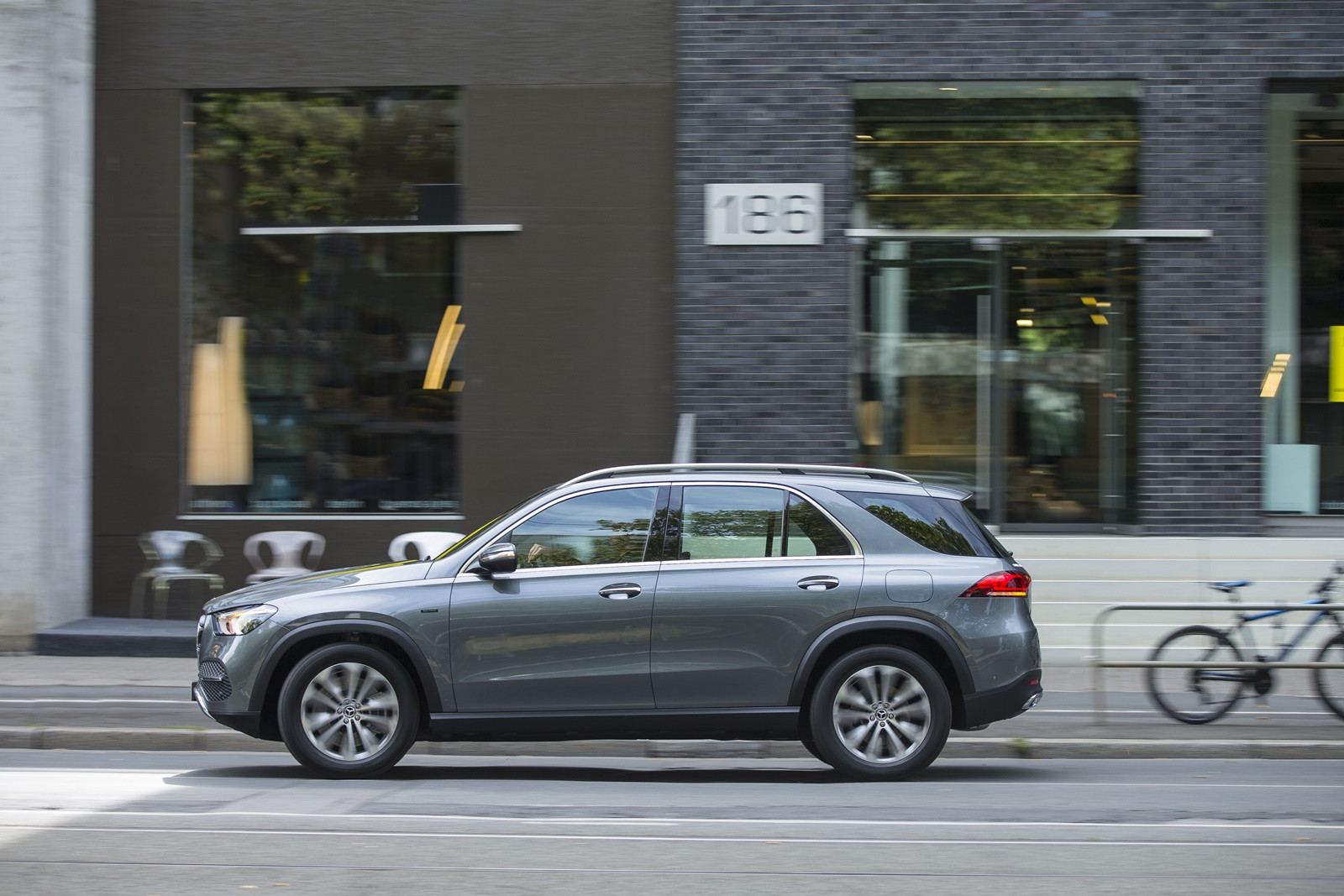 The GLE is well planted in the luxury segment. Mercedes has had good air suspension for years, here in a very comfortable direction, so it is more on the noise level that you notice that this is something else. Especially at high speed. It is quiet in the GLE, at least as long as it goes diesel-free.

The hybrid system works well. In the city, the car starts to drive from a standstill again, if only a short stop. For longer stops, a press on the throttle with the foot is required to drive. Mercedes has chosen very little regeneration when releasing the gas. The power can be adjusted with the paddles on the steering wheel under the Electric program, but even in the most aggressive program, it brakes little.

You can choose between +, – and -, but the default setting is Auto, and that’s where you want it. Then it will only vibrate if there are no obstacles in front of you, and slow down as much as it must if there are obstacles. 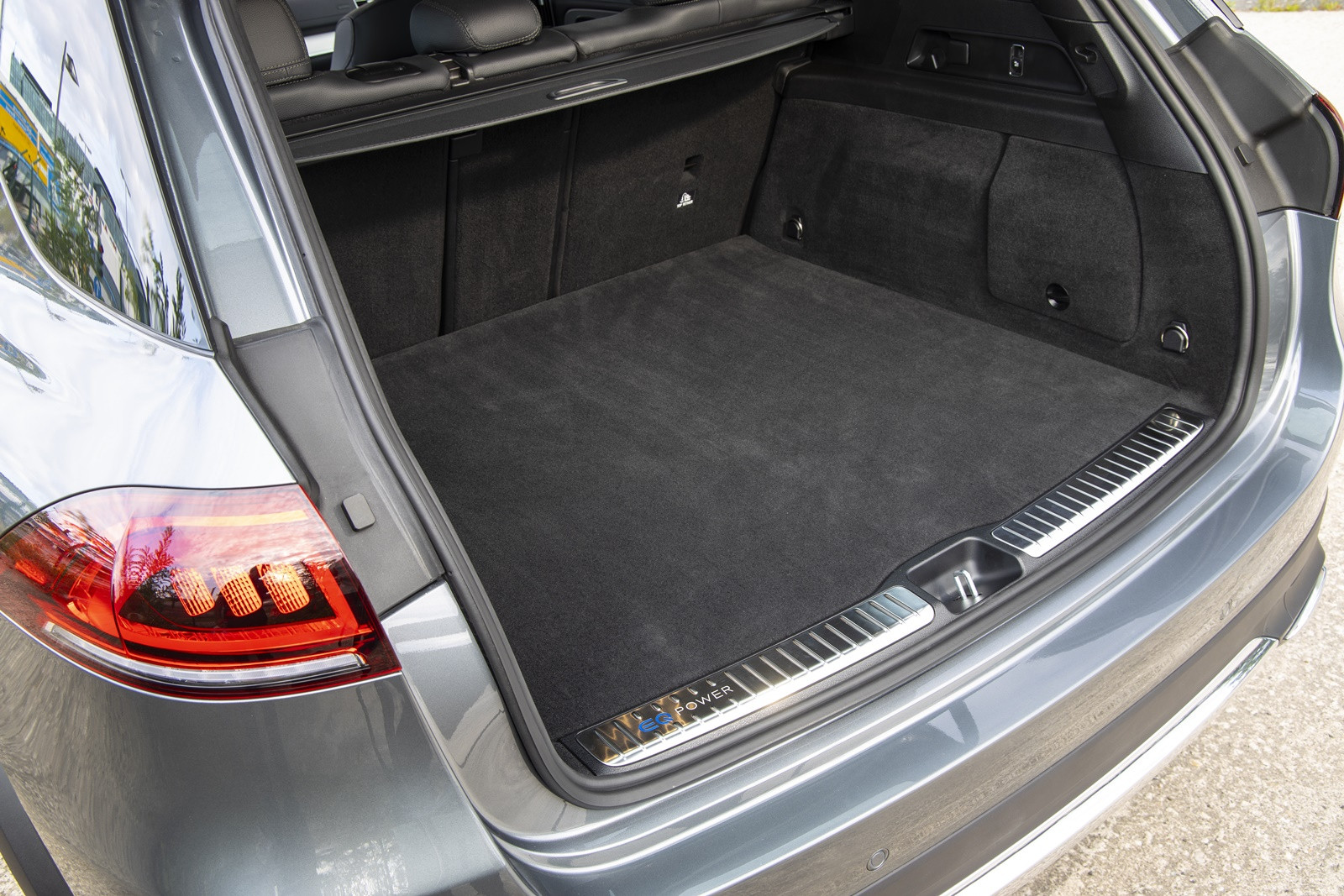 The wheelbase is almost three meters. First and foremost, the back seat passengers benefit of this. They can also get fully electric 6-way adjustable rear seats, if you pay extra. Regular GLE also becomes available with seven seats, but not the rechargeable ones. It is not possible to lift the luggage compartment floor, but it has normal height as before and can load up to 1,915 liters if the rear seats are folded down.

This is an SUV and the four-wheel drive has become more advanced than ever. They are coupled from 0-100 per cent to the front wheels and above 70 km / h the GLE 350 de is pure rear wheel drive, mostly to save power.

Officially, there is still no price for the plug-in hybrid Mercedes GLE 350 de, but the price should be just above the 272 hp GLE 350d, which starts at around 70,000 euros. 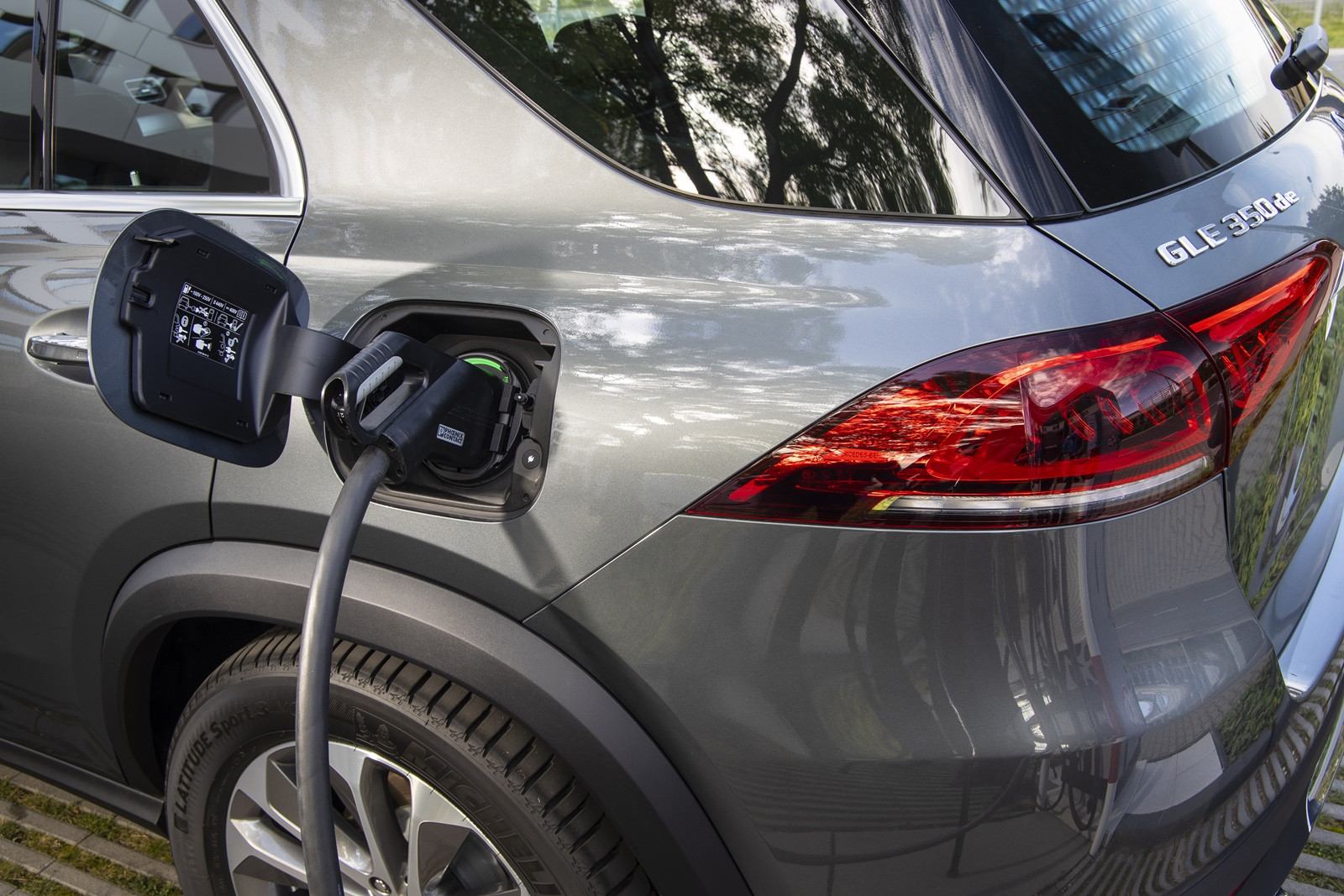 Conclusion
We have not fully tested the system and so far the price is not set, so final conclusion cannot be given until we have run it over a few days – but it seems promising. Here you do not try to make a super-fast hybrid, but have chosen a small turbo diesel, in combination with such a large battery that all daily driving takes place on electricity. 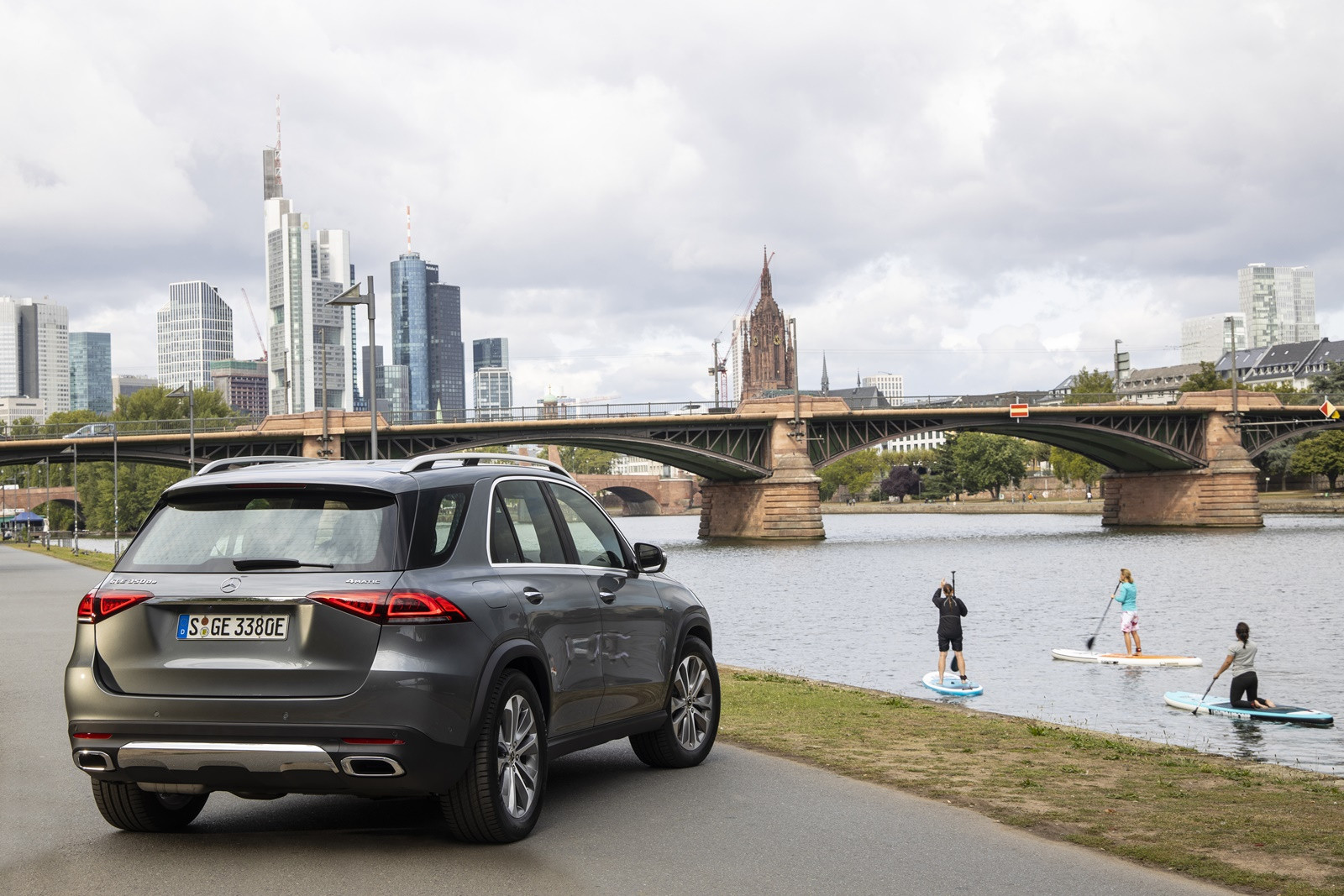