After four years, Mercedes revises the GLC bestseller, but it takes only an expert’s eye to see that the Germans have indeed given their mid-size SUV an interim update. The big progress is hiding under the skin. So, does change equals improvement? First test Mercedes GLC 300 d 4Matic.

The GLC is the best-selling SUV in the Mercedes range. Launched in 2015, the mid-sized SUV now has to face two newer rivals, the BMW X3 and the Audi Q5, so refreshment was clearly high on the agenda. But, don’t expect a revolution. The model strategists at Mercedes did not strive to make the previous GLC look old with their latest creation. The really relevant changes are concealed, as is so often the case with updates of successful car models, under the sheet metal.

The facelifted GLC can be recognized by the extra chrome elements, which now run through the side all the way, from the front to the rear. Thanks to the discreetly modernized radiator grille with double slats and a grid in diamond pattern, the front looks flatter and beefier overall. Also, the standard LED headlights (adaptive, 214 euro) are now a bit narrower and fit better with the current design language of Mercedes – you can now order the additional intelligent multi-beam LED lighting technology (1,457 euro), too. The rear lights are also new. Finally, bumpers and tailpipe trims were also redesigned. The optional design package “AMG-Line” includes, among other things, a chrome-plated grille in diamond optic and angular exhaust tips.

Good news continue inside, where Mercedes treats its best-selling GLC with its latest, state-of-the-art, MBUX infotainment system which now welcomes passengers with free-text voice interaction and input. This is especially noteworthy news, as the dashboard and controls on the center console are otherwise identical to those of the pre-facelifted GLC. Unlike the C-Class, which still uses the old Comand Infotainment system with no touchscreen functionality, in the GLC the center 10.25-inch display (Infotainment pack, 1,071 euro, Infotainment pack with Navigation, 1,844 euro, 7-inch standard) responds to finger pressure as well as to the “Hey Mercedes” command – the voice controls and the artificial intelligence assistant (think of Siri) actually makes life onboard a lot easier, because it prevents newcomers from being too deeply lost in the menus. With the new MBUX system, the Command rotary controller also disappears and is replaced by a touchpad. The new three-spoke steering wheel now comes with two touch pad areas, which control both displays. In addition to the screen on the center console, Mercedes also offer high-tech fully digital 12.3-inch instruments – these retain the old tube shape in the edge area, but gets the full MBUX functionality. The optional optional laser head-up display completes the display insanity with helpful driving information placed directly in the driver’s field of view. In addition to the MBUX operating system, the GLC offers a navigation system with augmented reality and voice control (part of High-End Infotainment pack, 2,493 euro). 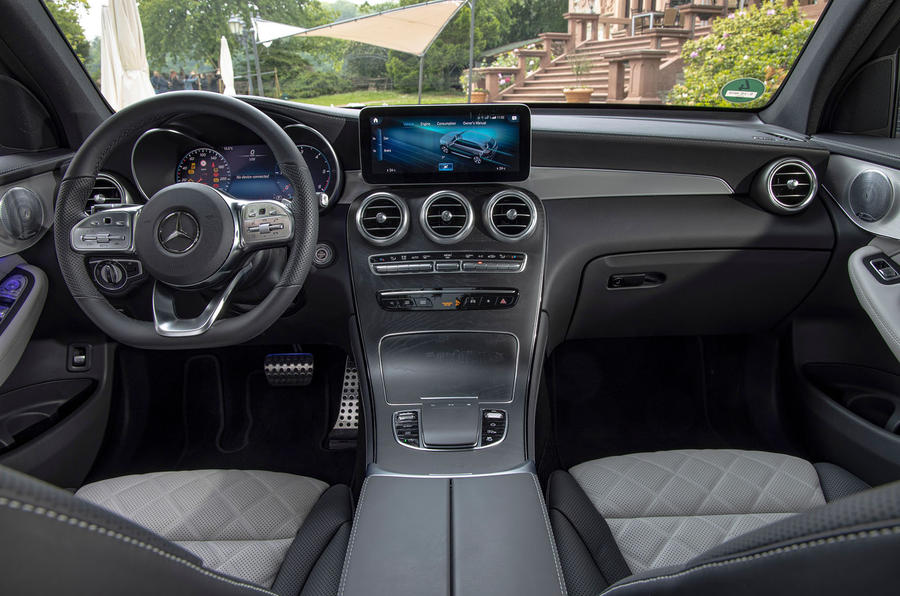 Driving aids now include more advanced adaptive cruise control and semi-autonomous driving. The GLC can be ordered, for example, with the active distance assistant Distronic, which automatically brakes in an emergency and starts again the car when the traffic slows down (Advanced Assistance Pack, 2,177 euro). The SUV also helps to build a rescue lane in traffic jams. In addition, it can automatically adapt to speed limits. The assistant is linked to traffic sign recognition and adjusts the speed either up or down. Of course, the GLC also monitors the blind spots and helps to hold or change the lane. All the systems can be ordered together with the High-End Assistance Pack (3,034 euro). For an additional charge, the Mercedes also parks independently, while an exit alert function draws attention to approaching cars and cyclists when the vehicle is at a standstill and the doors are opened (Advanced Park-Pack, 1,225 euro).

Comfort has not changed in comparison to the 2015 GLC. Seats and ergonomics were already right and Mercedes thus decided not to fiddle with their previous configuration. Also, Mercedes has not forgotten that the GLC is first and foremost a great family car, whose success owes a lot to the particularly well-judged practicality. We are happy to report space remains class-leading. In the rear, the GLC remains very roomy, with passengers 1.80 meters tall easily fitting in the second row of seats. The workmanship is, as always, impeccable in all respects. The large boot has a volume of 550 l to 1 600 l, which is more than welcome for active families who like to carry lots of stuff in their weekend road-trips.

Under the bonnet, the innovations fell even more extensive. As with the already renovated C-Class, the GLC benefits from a whole new generation of four-cylinder petrol and diesel engines, while six-cylinder units won’t come back to the range this time around – the 4.0-litre V8 bi-turbo is safe at the top of the range, in Mercedes-AMG GLC 63 guise. Customers can initially choose between two petrol and three diesel variants. All-wheel drive and the 9G-Tronic+ nine-speed automatic gearbox are always standard, while petrol engines are now characterized by micro-hybridization. 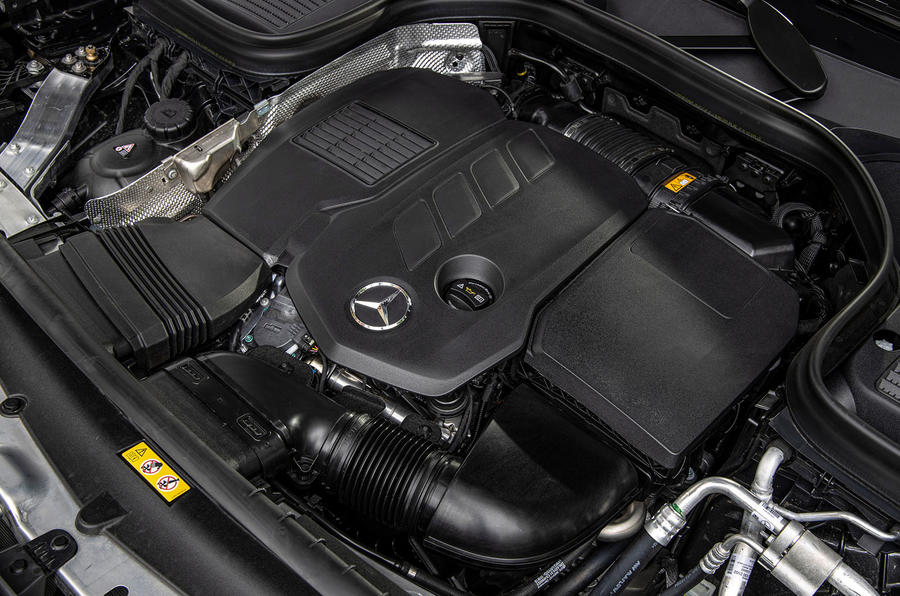 The 2.0-liter turbo gasoline engines (GLC 200 with 197 hp and GLC 300 with 258 hp) are now assisted by a 48-volt, belt-driven starter-generator mild-hybrid system. The standard electrification allows fuel-saving additional functions such as sailing with the engine off or brake energy recuperation. In addition, the generator called EQ Boost can assist the combustion engine with an additional 14 hp when accelerating, thus bridging the turbo lag. The mixed fuel consumption is rated at 7.1 to 7.4 liters per 100 km.

The new OM654 family of two-liter turbo diesel engines has been driving the E-Class and other Mercedes models for several years now, and from July, the GLC can also be ordered with these clean oil burners, available in three different power levels: GLC 200 d (163 hp), GLC 220 d (194 hp) and GLC 300 d (245 hp). These diesels now have improved exhaust aftertreatment and an additional underfloor SCR catalytic converter. On average, the new diesels should be content with consumption averages set between 5.2 and 5.8 liters per 100 km.

At the launch event in Frankfurt, we were able to test the most powerful 245 hp Mercedes-Benz GLC 300 d 4Matic, whose effortless mid-range punch shines thanks to a beefy maximum torque of 500 Newton meters available from 1,600 rpms and harmonizes very well with the standard nine-speed torque converter automatic transmission. The engine is also characterized by its quiet operation, thus complementing the high suspension comfort: the GLS still is one of the segment’s references, particularly with the optional Air Body Control three-chamber air suspension (fitted to our test car). However, there is now a cheaper option for almost equal comfort. The GLC gets with the facelift the “Dynamic Body Control” adaptive shock absorbers in conjunction with conventional steel springs. This saves 950 euros compared to the air suspension, available for 1,900 euros. 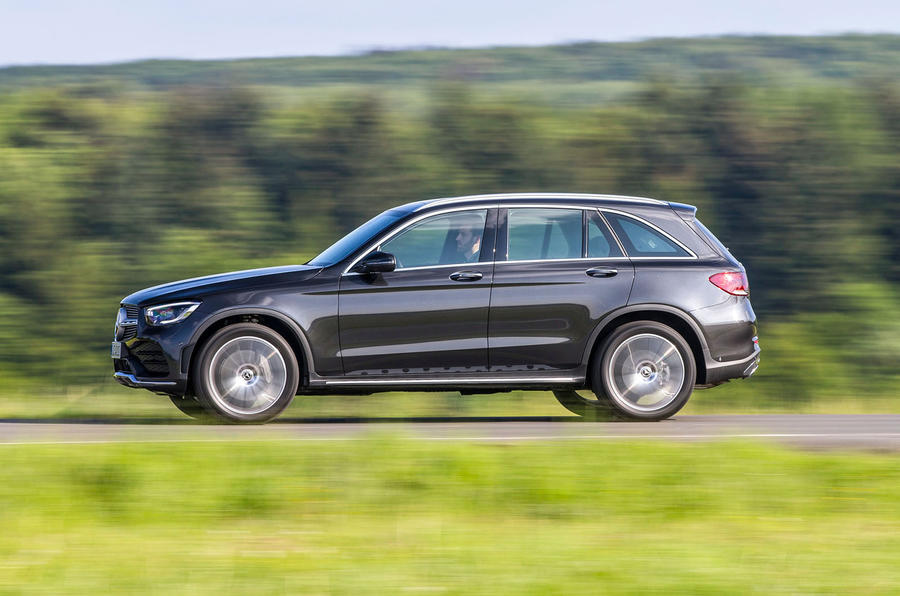 On curvy roads around Frankfurt, the GLC remains sovereign, with minimal body-roll and a fast steering with relevant feedback. This is not a particularly sporty car to drive, but a more laid-back GT cruiser befitting the ‘utility’ in ‘sports utility vehicle’. In addition to the already familiar driving programs (Eco, Comfort, Sport, Sport+, Individual), two other off-road settings are now offered with the optional Offroad-Technik Pack (702 euro): Off-road and Off-road+ (for air sprung models only). In conjunction with the up to 245 millimeters of ground clearance (maximum setting with the air suspension, 50 mm raised) and the front facing camera, the GLC continues to be more competent than any future owner would ever need it to be off the beaten track. The standard 4Matic all-wheel drive system is entirely controlled by an electronic brain with no locking differentials. The traction control effectively switches between sand, rock, snow and mud settings so torque is sent to the axle or wheel with best traction automatically, for optimum results in any road conditions.

Going back to the 2.0-liter diesel engine under the bonnet, we must say it now meets the new Euro 6d temp emission standard and is not very thirsty: on our journey of about 150 km on city, b-roads and highways, we managed an average of about 7.0 l / 100 km, which is rather reasonable for a vehicle of such size and far less than the comparable gasoline engine in the GLC 300. The two-liter turbo engine might be complemented by a 48-volt mild hybrid system which has the stored braking energy returned directly when accelerating and is said to make the GLC 15 percent more economical, but still does not match the diesel models in terms of frugality. This is likely to become reality only in the fall once the plug-in hybrid GLC 300 e, which combines the same 2.0-liter turbo gasoline engine with a battery and a transmission integrated electric motor, will become available. The fully electric range could be between 40 and 50 kilometers.

Until then, only the most innovative propulsion system remains as an alternative drive: the GLC F-Cell. Mercedes continues to produce it in small series as an optical middling between the updated GLC and the previous variant. Thus, the headlamps remain as old as the infotainment system, which, as in the C-Class, although with a new look, has to do without new functionality such as touch screen and voice control. While the fuel cell GLC continues to be offered only as a rental vehicle to the customers, all other models can be ordered already, quite conventionally so. The prices start from 46,237 euros for the gasoline powered Mercedes-Benz GLC 200 4Matic and from 47,724 euros for the Mercedes-Benz GLC 200 d 4Matic diesel, while for the likewise updated GLC Coupe, Mercedes asks a quite hefty 3,600 euro surcharge. 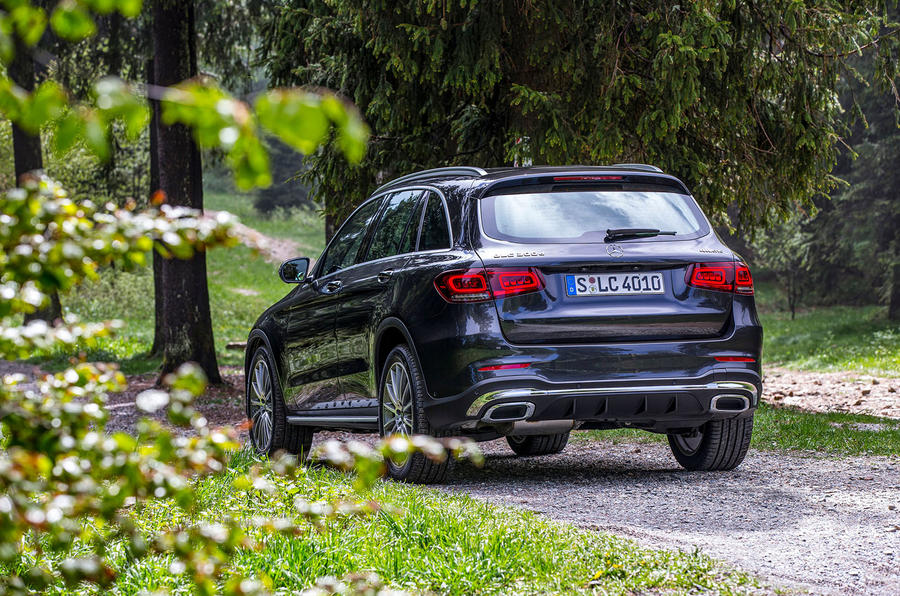