Since immemorial times, the Mercedes G-Class is not concerned with on-road but with off-road. The question is, can the new G 500 and AMG G 63 with independent suspension rise up to their predecessor legendary high bar? FIRST TEST Mercedes G-Class 2018 On and Off-Road.

A mix of new and proven technology takes care of the propulsion for the new Mercedes G. In the engine compartment we find the already known from the predecessor four-liter twin-turbo V8, which makes 422 hp and sends to all wheels 610 Newton meters via the nine-speed 9G-Tronic converter automatic gearbox. This is again new and it is a specially adapted for off-road use. The Mercedes-AMG G 63 on the other hand exchanges its 5.5-liter V8 for the famous 4.0-liter biturbo V8 that has been rolled out over the AMG range in recent years.

Switching is done by means of an AMG Speedshift TCT transmission with nine gears. Acceleration from 0 to 100 km / h takes 4.5 seconds on the clock, almost a second earlier than the previous G 63. The new car with its 2,485 kilos is roughly 175 kilos lighter than its predecessor. AMG has of course taken care of the chassis of the G-class. Sixty percent of the power is sent to the rear wheels. The top speed is 220 km / h, but those who order the AMG Drivers package must be able to continue until the digital instruments reach 240 km / h.

But, above all, the new G is expanding in breadth, where it is growing by a staggering 121 millimeters. On the inside there we find more 68 millimeters of elbow room, which reads less than it feels. The additional length (53 mm) and modified construction brings 150 rear and 38 millimeters front more legroom, the car feels in all places much airier than its predecessor. The terrain values ​​have also been improved, so the ground clearance between the axles is now 24.1 cm, plus 6 millimeters. Further key data: maximum fording depth of now 70 cm, additional 10 cm, slope angle rear: 30 °; front: 31 °, plus 1 °; Ramp angle: 26 °, plus 1 °. 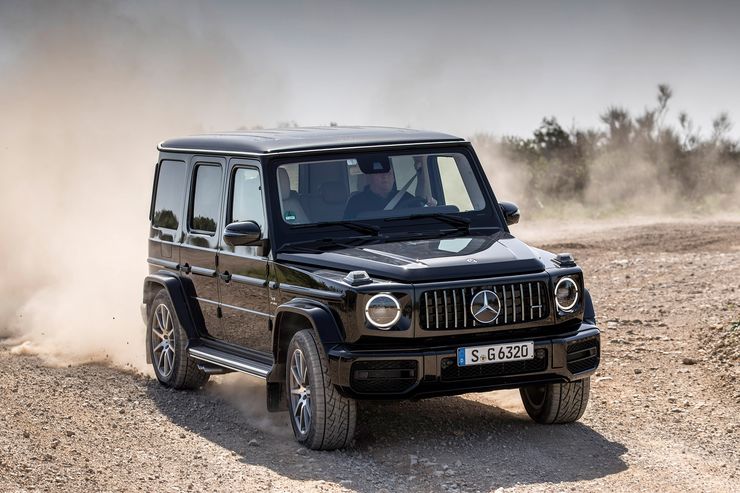 Rally-raid like with the Mercedes-AMG G 63
Who actually comes up with the idea of ​​riding a standard G-Class Rally-Raid like? The answer is simple: Mercedes-AMG. So we are invited to the south of France near Carcassone on the total of 385 kilometers test track where usually rally cars tuned to the Dakar are proven. There is not much more than a lot of boulders, boulders, crater-deep potholes and spiky bushes.

The V8 twin-turbo is already warm, we start as at the beginning of a special stage with Launch Control. So Drive-Select on Sport Plus, pull both paddles on the steering wheel, left foot on the brake, right foot on the gas. The V8 grins angrily at 3,000 rpm. The left foot slips off the brake. Gravel stones fly. The 20-inch wheels with Allterrain tires are looking for support, while 850 Newton meters fall on all four of them. Now it is time for the Alcantara steering wheel to hold well and countersteer, because the AMG wedges slightly to the left. 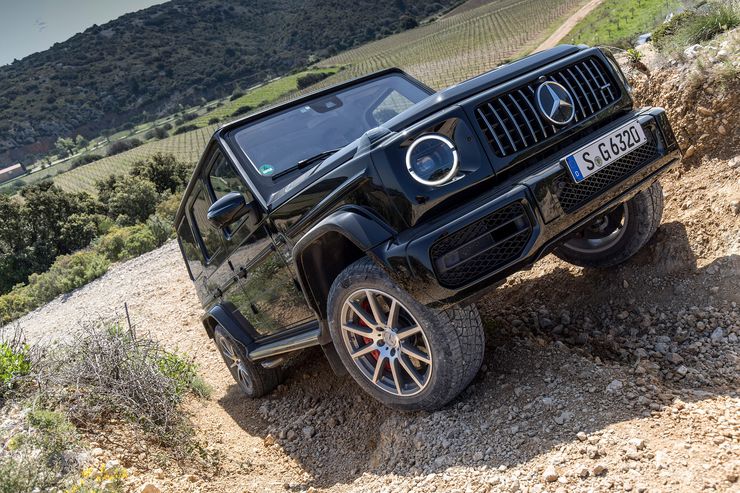 On the meandering dirt roads, the slightly stern-heavy design in the ratio 40:60 quickly arouses the driver’s play instinct. But you have to be bright awake, because on the oversized digital speedometer well over 100 km / h are shown. Like the normal G-Class, the AMG version has three differential locks. In contrast to the G 500, however, these are more generously dimensioned. Although they can also be controlled separately, the AMG offers three pre-programmed modes for mud, sand and rocks. But we do not need them here. We prefer to personalize the electric steering to Sport, throttle response to Sport Plus and so we do not suffer a herniated disc, set the standard variable damper on Comfort. Even the huge pothole craters never upset the driver.

Now, the terrain is much coarser: From stones to boulders. A martyrdom should mean, but the steep slope climbs the G63 are almost playful. Once at the top, a plateau expects us to let it fly again. The strong wind drives the meter high dust clouds in the rearview mirror across the sparse heathland, only when hard braking the brown fog catches up with us. It is followed by short degrees, small jumps many tight turns. No problem, but a huge fun. However, it is time for the descent, we finally want to go on the road. Even more on-road performance
Thanks to the new independent front suspension with solid strut brace, significantly stiffer body and additional stabilizers on the rear rigid axle, the G 63 is now much better to drive. Incidentally, the latter measure should affect the maximum entanglement in the terrain, if that should disturb someone at 24 inches of ground clearance. A big plus is the more direct, since now electrically assisted, steering which really shines on the ever winding French country roads. However, more than two and a half tons with a high weigth center create natural limits. In fast turns the ESP works full time.

The problem, you are always too fast. The four-liter twin-turbo has even more buzz than the old 5.5-liter V8: with Launch Control on asphalt you beam the wall in on 4.5 seconds to 100. The sharper tuned 9G-Tronic skin the gears mercilessly quickly when needed. The side-pipe sound is still beguiling, even if many a colleague thinks that the old V8 sounds even better. Speeding is not fun in the long run though. Although the suspension comfort in view of the (now) 22-inch wheels is more than fine. However, ruts and crosswinds like to prance the G 63 on the highway. In addition, annoying from tempo 130 km/h: strong wind noise. Modern power SUVs can do that much better. But they would just have fallen apart in the area after just a few meters. 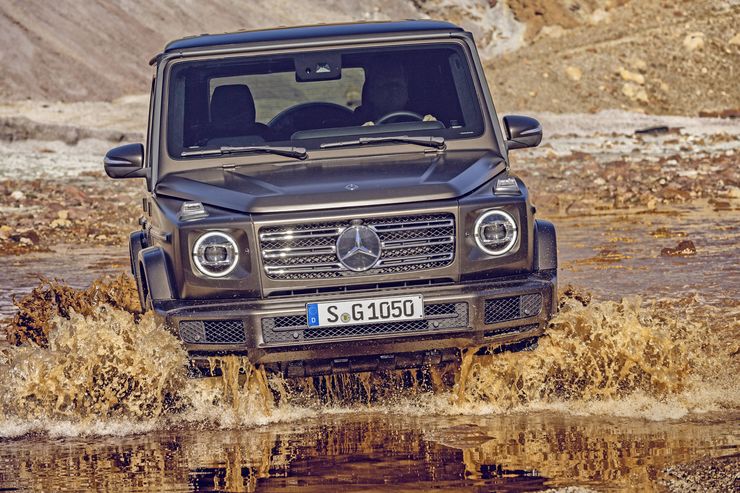 Driving Report Mercedes G 500 Off- and Onroad
Beetween the axles the ground clearance is now more than 24 centimeters. And of that we need every inch on the huge off-road course of the Château de Lastours. The 850 square kilometer area is peppered with boulders, boulders and deep potholes, so here we can let off steam. You feel and hear the huge craters while driving through, but the harsh impacts never affect the driver.

But now it’s time for real G-lands. We climb a steep slope with the charm of the Eiger North Face. So pure in-ground reduction, which was shortened from 2.1 to 2.9: 1. On the loose ground, the G-Class first activates the middle differential lock, which also deactivates ESP and ABS. As we drag along deep bumps that completely cancel out the suspension, first helps the rear, then the front mechanical lock on. It’s all the same as with the last generation, without stopping. With emotional gas use the mountain is ultimately no obstacle to the G.

Water passage must not be missing
If you drive up, you have to get down on the other side. In manual mode, the G safely rolls downhill without driver intervention. On the up to 60 degrees steep slope you hang in the belt and take the embankment at the bottom, without the front and rear set up remotely with the bumpers. Of course, a water passage may not be missing. The G dives almost to the window line and should be able to wade through even 70 centimeters deep rivers. This brown pool is certainly deeper, and yet it does not drain. Respect, also because the new G-Class at the first off-road ride is as full and solid as its predecessor. 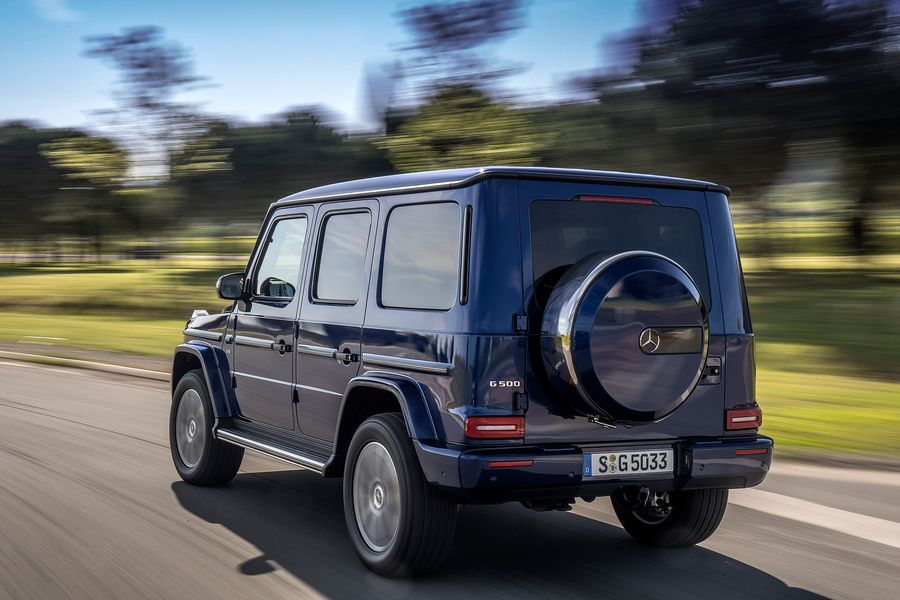 And on the street? Here the new Mercedes G-Class does everything better. Thanks to the new independent front suspension, the more direct, electrically assisted steering and optional damping, the G 500 feels comfortable on the winding French country lanes, although he can no longer conceal his good 2.4 tonnes and high center of gravity here. So that you do not tilt out of the seats, the outside cheeks of the leather seats inflate. That is also because there is always more than enough power: according to Mercedes the G 500 needs only 5.9 seconds to reach 100 km/h. The comfortably tuned suspension has quite long-range qualities, as well as the supple auto-recession. For this purpose, you can now order more assistance systems, but intervention in the case of the Lane Assistant is a bit gruff. However, G-class shoppers will have to do without semi-autonomous helpers or the new MBUX voice service.

The G offers more space in the interior
Open-pored wood, clean processed leather, ambient lighting and metal trim parts. And you feel immediately, here is finally more room: 38 mm more leg and shoulder room and 68 mm more space for the elbows sound manageable. In direct comparison, these changes really make an impact, because there was never enough leg or elbow in the old G-Class. Since you are still sitting high and close to the windscreen, the overview is much better than in many modern SUVs.

On the dashboard we find now design elements of the old G-Class and the E-Class and S-Class. The side vents mimic the shape of the round headlights. Fittingly, the tweeters of the optional Burmester surround sound layer are modeled to look like the hood turn signals. Luckily, the grab handle in front of the front passenger and the three chrome-plated switches for the differential locks in the center console have remained. However, the analogue clock has moved so far down that it can only be read from the rear. 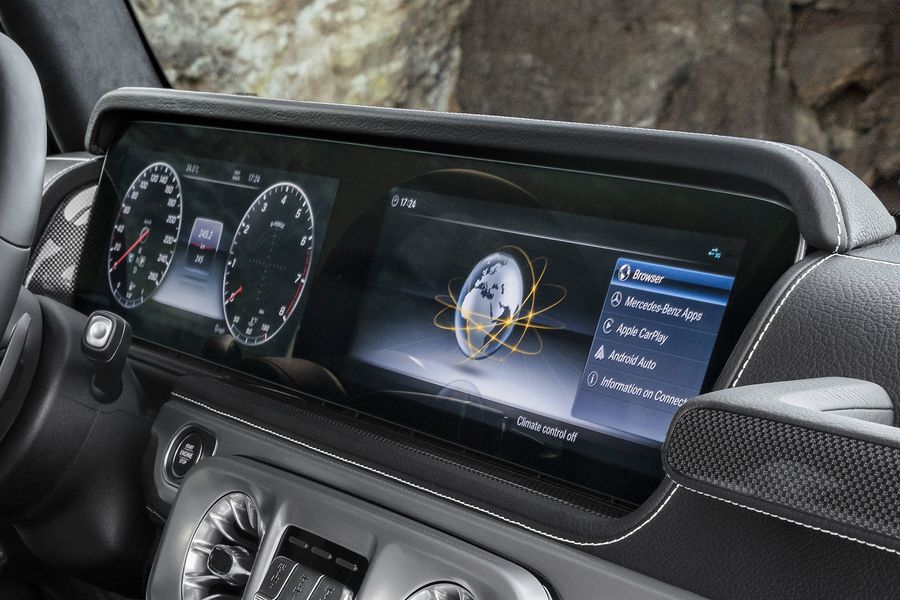 Standard analogue instruments display speed in the cockpit. Optionally, the SUV gets the so-called widescreen cockpit, which we already know from E-, S- and the new A-Class. Here, two 12.3-inch displays merge under a common cover glass to form a display unit, whose appearance can be individually adapted in the three styles – “Classic”, “Sport” and “Progressive”.

Since the infotainment system can be operated via touch fields on the steering wheel, the hands can stay there all the time. The driver receives feedback through haptic impulses and acoustic signals, which is why the system can be “blinded” on the road or in the field. For this, frequently used tasks can be assigned to direct dial keys in front of the controller. The buttons for the driver assistance systems are now above the light rotary switch. 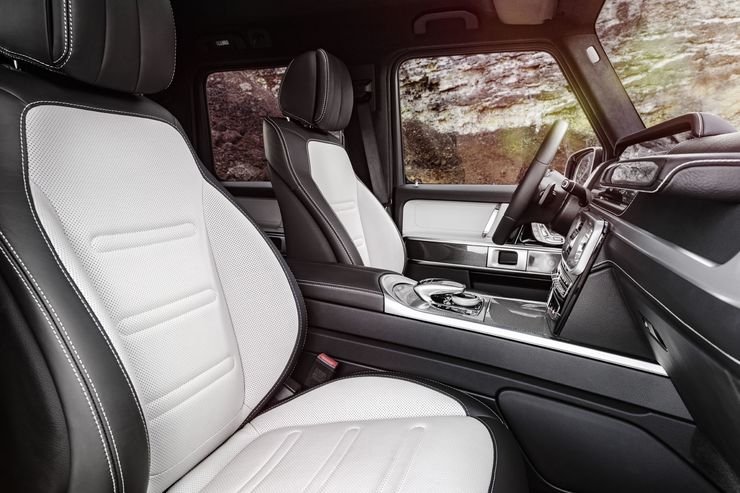 Lighter and barely more expensive
The new G 500 should weigh 170 kilograms less than its predecessor. Among other things, new high-strength steels and aluminum, which is used in the doors, bonnet and fenders, will help. Thanks to the new material mix and optimized construction, the torsional stiffness should be 55 percent higher than that of its predecessor. And thanks to the lower weight, the new gearbox and the better aerodynamics, the consumption of the G 500 drops from 12.3 to “only” 11.1 liters per 100 kilometers.

The most important info at the end: the price. Here, the G 500 is the only variant which can be ordered at the beginning, with more models such as a diesel and the Mercedes-AMG G 63 version not yet available. The new G 500 will have a base price of 107,041 euros. This is about 350 euros more than for the predecessor, from which one can draw certain conclusions about the further model range and its prices. 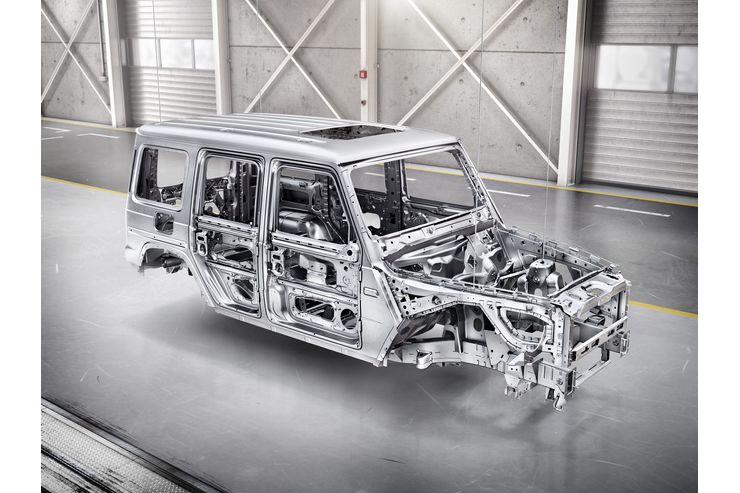