First test Mercedes EQC 400 4Matic: Everything about the electric SUV

The Mercedes EQC 400 4Matic is the first model of the EQ family and launches Mercedes’ electric offensive. The first driving reports started to pop up around the internet and we bring you the first impressions about the electric SUV with 408 hp.

After Tesla, Jaguar and Audi is now also an electric Mercedes in the premium class at the start. Its 80 kWh battery and 400 kilometers range according to the new WLTP measuring rules make it long-distance suitable. With a starting price of 71,281 euros (Germany), the Mercedes EQC opens a new chapter at Daimler. The electric SUV is the first product of the brand “EQ”. The two letters stand for “Electric Intelligence” and are to merge according to the manufacturer “the brand values ​​emotion and intelligence”. By 2022 Mercedes wants to have ten electric models at the start and the roadmap starts with the EQC, which will be coming to dealers starting in June 2019.

The 408 hp EQC uses the platform of the GLC, the middle SUV series from Mercedes. Thus, the EQC runs on a combustion platform – an independent basis for electric vehicles is still under development at Mercedes. At first glance, the 4.76-meter-long car looks like a normal SUV. Only the exhaust is missing. Visually, the Mercedes EQC resembles its platform brother GLC. To differentiate the EQC from the GLC, Mercedes positioned the electric SUV with its stretched roofline between the categories SUV and SUV coupe. Striking at the front is the large black panel surface that encloses the headlights and the grill. The upper end of the Black Panel is a light guide which works as an optical connection between the daytime running lights. 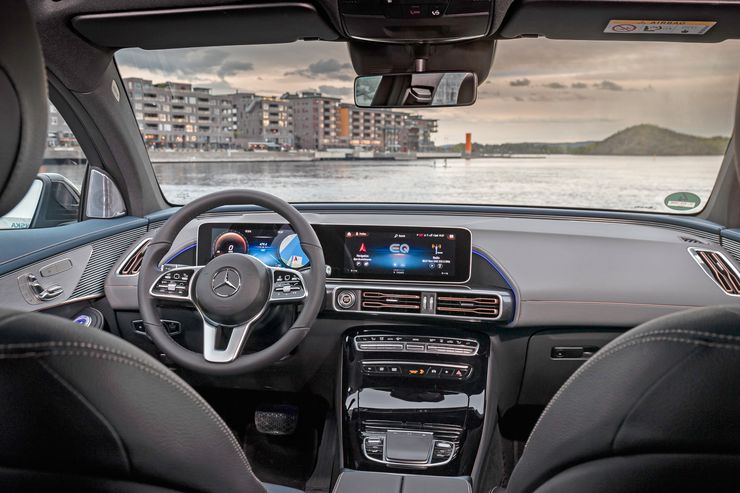 Anyone expecting futuristic electric high-tech will be disappointed. Normality is present also inside. In the cockpit sits the meanwhile usual at Mercedes large screen, on which the MBUX operating system runs. In addition the brand-typical switches and buttons. A start button, the automatic lever behind the steering wheel – the EQC presents itself as a very ordinary car, where nobody has to think long before he drives it for the first time. Mercedes does not want to scare customers into its first electric SUV and therefore relies on well-known and proven design. And strictly speaking, the MBUX infotainment system is already a lot of high-tech. In the EQC, the MBUX also has displays for range, state of charge and energy flow. For further visual distinction, Mercedes in the EQC does not rely on the round air vents as in the GLC, instead vertical and horizontal air vents in rose gold are used here. The climate control elements are easily inclined to the driver. As a result, the MBUX displays do not sit on the front of the dashboard, but are slightly offset towards the center. In combination with the tapered center console, this creates a better sense of space than in the GLC. This fits an electric car, which usually scores with more space than a gas burner.

You have to click into the extensive submenus to discover the intricacies. For example, the driver can select from three recuperation levels. In the strongest, the car brakes so hard that the driver can almost completely ignore the brake pedal. Also sailing is possible. Then the drive decouples and the load rolls for kilometers, which can bring several miles range in anticipatory driving on the highway.

The easiest way, however, is to leave everything to the Eco Assistant. The networked the data of navigation, traffic sign recognition and radar and cameras. The driver simply pushes the current pedal through until he feels a slight resistance. Then the car in the city speeds up a little slower, on the highway a bit faster. If the driver is off the gas, the car brakes as hard as it takes gradient or cars in front. And if a speed limit or a sharp turn comes, the driver is also visually advised to take his foot off the pedal. 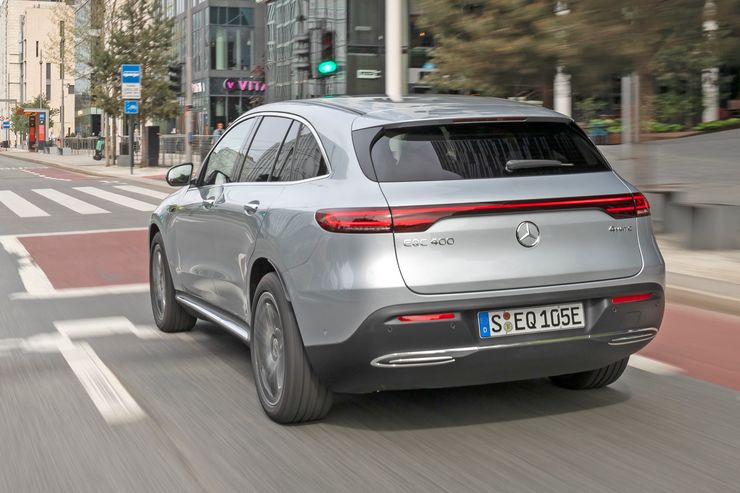 The system also uses the networked data for trip planning. If you want to visit several customers, the addresses are best entered on the PC in the office and then sent the route into the car. With every tour, the system suggests suitable charging stations and charging time. For example, if the driver indicates that he only needs an emergency range at the finish, this is also taken into account and a shorter intermediate charge is suggested. On the way, the navigation system evaluates weather and traffic data, battery level and driving style every two minutes and corrects its route as needed.

To ensure that electricity can flow on the road, the driver has access to about 300,000 charging points worldwide via Mercedes Me Charge. That one just does not have the right loading app is now no longer an issue. The car contains payment data from around 300 European charging station operators. The stations recognize the car, each amount is deducted individually, and at the end of the month the owner receives a collective bill.

The EQC charges with up to 110 kW. This means that he can also use the 400 Ionity fast charging stations, which are mainly located on highways and European routes. If the electric car with a level of ten percent approaches such a DC power station, its batteries will have energy for a good 300 kilometers after three quarters of an hour. The whole costs only eight euros. At least as long as Ionity still charged for each charge eight euros. 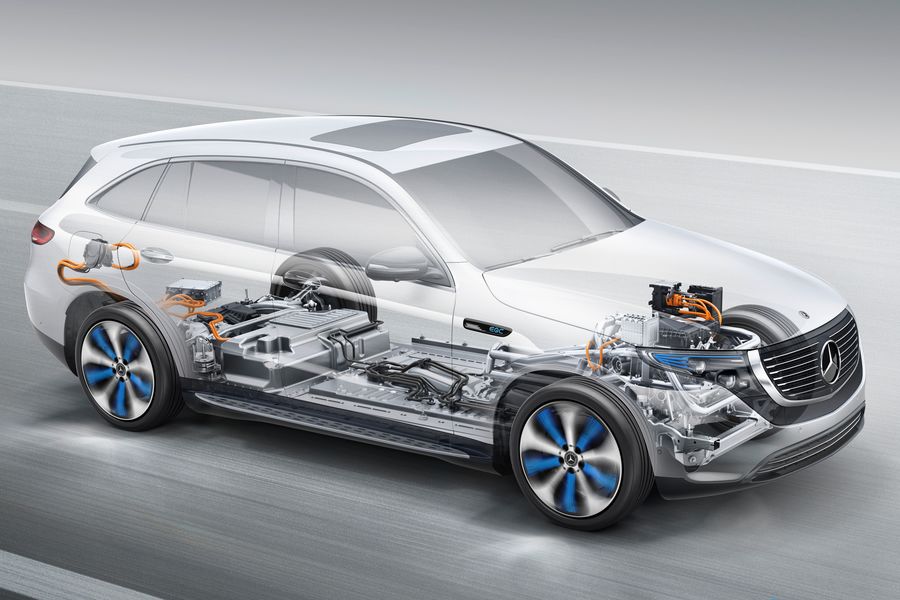 The drive system is new and comes with two electric motors – one on the front and one on the rear axle – so that the EQC benefits from the driving characteristics of a four-wheel drive. The total output is 300 kW (408 hp), the maximum torque of both electric motors is 760 Nm. And like a fuel-efficient modern all-wheel drive, the electric drive is also trimmed for efficiency. The front motor takes over the weak to medium load range, the rear comes to life in the dynamics oriented situations. The lithium-ion battery in the vehicle floor has a capacity of 80 kWh and a total weight of 650 kg.

But how does the first all-electric EQ model from Mercedes drives? Press start button and: silence! Most electric cars are quiet but the EQC is really quiet. When gently accelerating, virtually nothing can be heard from the two electric motors (eATS). Only under full load a soft whirring can be heard. That’s because Mercedes has invested a lot of work in noise reduction. The electric drive trains are decoupled via rubber mounts to the subframe and body and surrounded by special foams and insulating materials. In addition, the EQC is supplied as standard with noise-absorbing acoustic glass.

The platform brother of the GLC also impresses with its comfort. In comfort mode, the EQC gulps away bumps and cross joints – despite 21-inch AMG rims (extra charge). Overall, there are five driving modes available in the electric SUV (Comfort, Eco, Max Range, Sport and Individual). In economy mode Max Range there is a resistance in the gas pedal at certain speeds, depending on the state of charge, to prevent unnecessary and range-consuming acceleration. This resistance can only be overcome with a very courageous step on the gas pedal. Unusual for all electric newbies: the shift paddles in the EQC are not responsible for the gear change, but for recuperation. Five levels of maximum recuperation in “D” to automated energy recovery in “D Auto” are possible. Popular with electric riders, “One Pedal Driving” works only to a limited extent in the EQC, as it does not slow to a stop, but keeps rolling at walking pace. 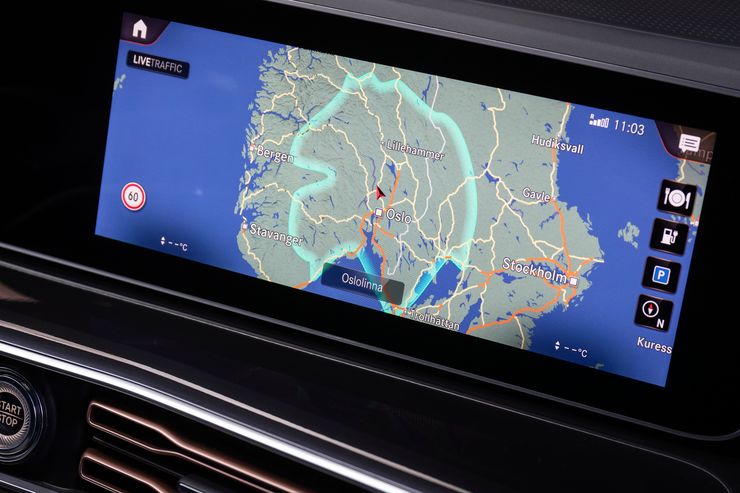 And with a good 400 hp and two engines that drive the front and rear axles, the Mercedes EQC is also very confident. Despite the rich 2.5 tons, which brings the SUV on the scales. Nevertheless, during normal driving, nothing is felt. After just over five seconds, the EQC passes the 100 km / h mark. Overhauling slow cars takes little more than a blink of an eye. Only on winding roads the high weight becomes noticeable. Who wants to change into the sports mode can do so. The 2.5-ton EQC accelerates to 100 km / h in 5.1 seconds. At 180 km / h, however, is over, the top speed is capped.

Full throttle driving is affecting the range, as expected. Which brings us to the most important topic: Mercedes reports the range of the 300 kW (408 hp) EQC confusingly at 445 to 471 kilometers. This value is still calculated according to the NEDC standard. According to WLTP (mandatory since September 1, 2018) the range is only about 390 to 410 kilometers. According to the data sheet, the electric SUV is expected to consume 22.2 kWh per 100 kilometers. On the extensive test drive, the EQC averaged about 28 kWh and displayed at full battery about 370 kilometers range. All in all, it can be said that under real conditions, around 300 kilometers are possible with one charge of a battery – including switched-on consumers, fluctuating weather and changing traffic conditions. Ambitious electricians will certainly squeeze a few more kilometers out of the 80 kWh lithium-ion battery. 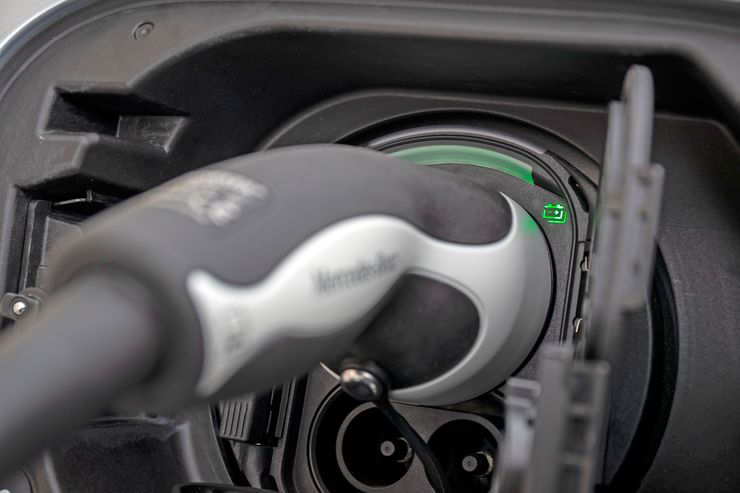 The EQC comes as standard with a 7.4 kW water-cooled on-board charger (OBL), ready for AC charging at home and at public charging stations. Mercedes promises that the battery manufactured in Germany can be charged from 10 to 80 percent in 40 minutes on an Ionity fast charging station with direct current. There are, however, two problems: By the end of 2018, stations had been opened across Europe at 45 out of 400 planned locations by 2020, and permanent fast charging could have a negative impact on the battery life. Therefore limited Mercedes charging power with DC to a maximum of 110 kWh although technically up to 150 kWh would be possible. Alternatively, Mercedes offers a wallbox, which can be installed in the garage, but then the charging process takes 11 hours. It takes even longer for a standard outlet.

Regarding equipment, we can not say that the 60,000-euro (71,281 euro with VAT) basic version is equipped lean. In addition to the extensive safety technology, it brings a reasonable comfort equipment with electrically adjustable leatherette seats, intelligent LED headlamps, electric tailgate and navigation. Most buyers will, however, cheerfully click through the configurator. From the steering wheel heating through the driver assistance package to the AMG styling with 21-inch wheels, as usual, everything is possible with the brand with a star. On the other hand, there is a free maintenance service over six years or 150,000 kilometers including collection and delivery service. 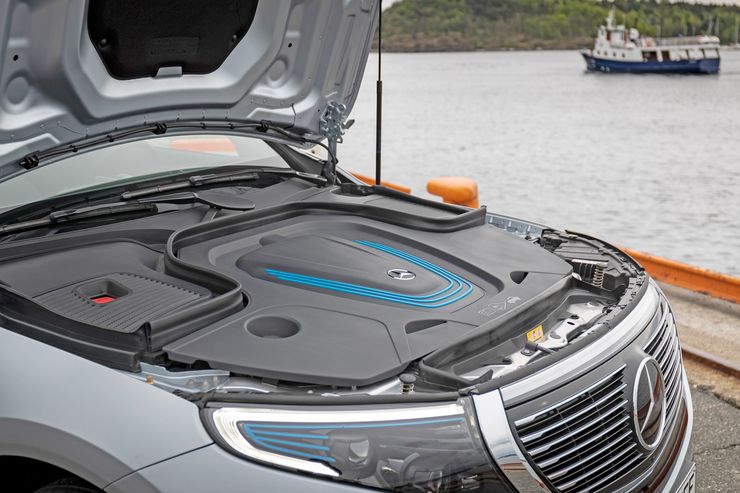 Conclusion
Comfort, features and optics of the EQC are top! The range goes with real 300 kilometers in order, the long shop annoying. The first EQ model from Mercedes is a successful car for electric pioneers who enjoy the technology and can live with the limitations that still exist.