In recent generations, the C-Class was launched relatively shortly after the S-Class and was named a mini S-Class because it took over a lot of innovations from its big brother. However, the fifth generation C-Class is more than a mini S-Class. First impressions with the new Mercedes C-Class W206 in the top diesel version C 300 d with 265 HP.

This is what happened now when the new C-Class W206 appears just a few months after the S-Class W223. But this time, the fifth generation C-Class is more than a mini S-Class.

We say this not only because the new C-Class no longer has the logo on the hood. the logo is now integrated into the radiator grille in all versions as it was before in the Avantgarde versions. Behind the change in the positioning of the grille is a profound change in philosophy, which you notice at the first contact with the car. 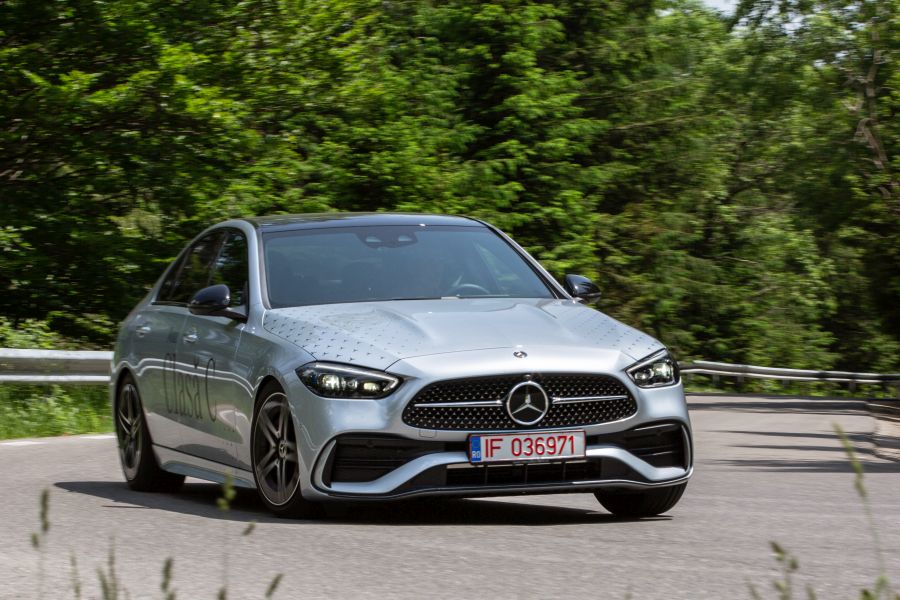 “I’ve never sit so low in a Mercedes,” was the first impression when I got behind the wheel. Indeed, in the new C-Class you sit as low as in the BMW 3 Series. And this shift to sportiness is no accident. Many Mercedes C-Class customers wanted a more sporty saloon.

Not only the driving position is more sporty but also the interior ambience. The vents located above the new multimedia screen in portrait format protrude slightly from the dashboard as in sports limousines, the multimedia screen is mounted tilted and directed six degrees towards the driver and the new sports steering wheel with two double spoke and paddles to change gears complete the new sports image together with the sports seats from the AMG line that have a longer cushion and a new system of horizontal adjustment of the headrests.

The electric controls on the doors for adjusting the seats have been kept, but they now have a semi-tactile operation. So, you have to touch them, but also push them lightly to adjust the seat, and the feedback is not great. Instead, the other new touch controls are very practical. Adjust the exterior mirrors, interior lights, sunroof and sunroof blind by sliding your finger on a touch surface. The same is done with the controls on the steering wheel, because the Mercedes C-Class W206 received the new steering wheel with double spoke from E and S-Class in which the tactile surfaces replaced the mini-touches. 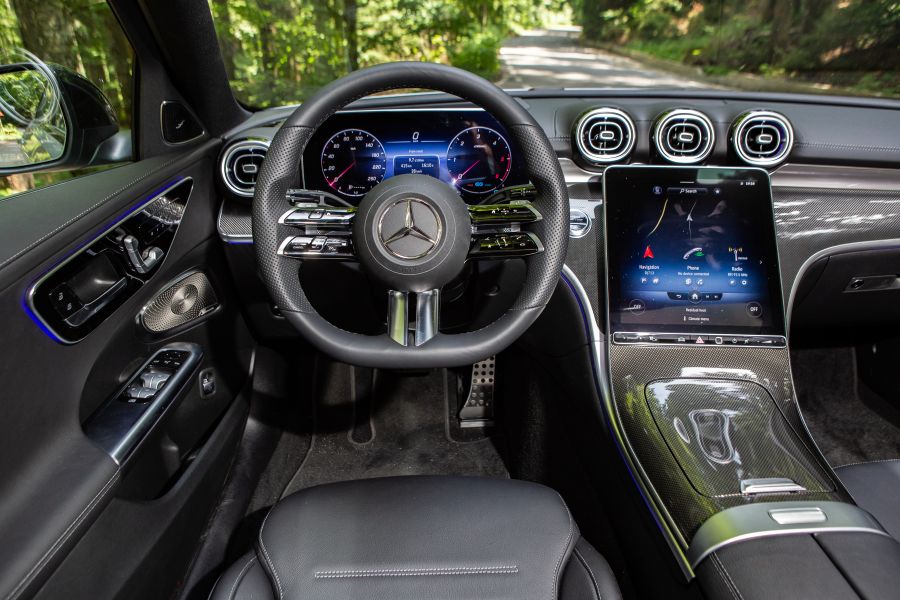 As standard, the Mercedes C-Class W206 comes with a 10.25-inch digital display for the instrument cluster and a 9.5-inch screen for the multimedia system. For 3195.15 euros you get the 12.3-inch digital display for the instrument cluster, the 11.9-inch basic screen from the S-Class and augmented reality, but displayed on the screen and not on the head-up display as in the S-Class.  And for another 1178.10 euros you can also have the new head-up display which has a larger display area. The good news is that with the adoption of the new MBUX system from S-Class, the touchpad from other models, which was inaccurate when operated, has disappeared.

The air conditioning menu is excellent, but also the navigation menu, with the augmented reality that projects the images and indicators from the crossroads on the multimedia screen. Navigation is connected to Google Earth and you have everything in real time.

The only physical buttons – and those are not physical either, because they have haptic feedback – are the ones at the bottom of the touch screen,  from which the volume button can also be operated by swiping your finger. And there is also the possibility of fingerprint authentication, as in the S-Class.

The new Mercedes C-Class W206 is even more practical. The central tunnel with two compartments has everything it needs: USB-C plug and induction charging area for the phone in the first one and two more USB-C sockets in the second. Also practical are the interior part of the doors with the handle that seems to float and gives a lot of space for the pockets in the doors.

Less successful are instead the imitation metal insert on the console and the central area of ​​the test car. But, fortunately, the client has four or five more options, from natural lime, ash or walnut wood insert to silver inserts with a diamond pattern.

When you looked at the former C-Class you noticed that the rear door was cut quite narrow at the bottom and the rear access was not very comfortable. Also, the cushion of the bench was quite short. Although the new model is built on the same platform, the proportions are different.

The new Mercedes C-Class W206 has wider rear doors, and the rear knee space has been increased by 33 mm (the wheelbase is 20 mm larger), which allows a very comfortable seating on the bench with a well-profiled backrest and a longer cushion.

The 455-liter trunk has about the same volume as the previous generation, but has a more regular shape, because the multilink suspension no longer raises the floor in the side area. And the two finer buttons in the trunk, for folding the bench 40/60% (the station wagon comes standard with a 40/20/40% split backrest and electric tailgate), are in the ideal place.

Mercedes C-Class W206 has kept the structure of the drive train with the four-link front axle gear that separates the suspension from the steering and the multilink rear axle. But now the front structure is more rigid.
The shock absorber pot is no longer just a piece of sheet metal attached to the body, but is a solid piece of ribbed steel welded to the front side member and connected to a stiffening bar, being part of the stiffening structure of the car. 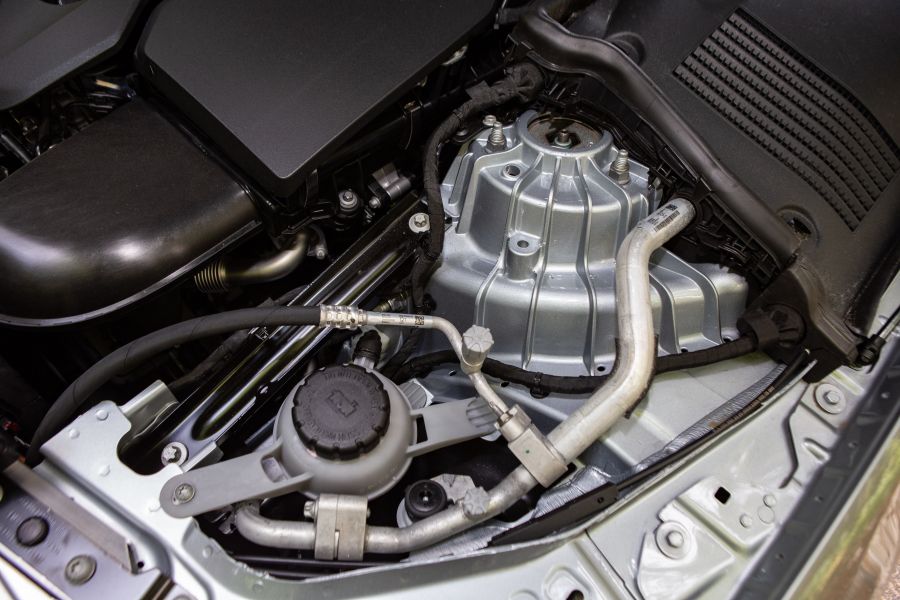 The four-link front axle and the increased rigidity of the front assembly help to achieve a superb roadholding. The new C-Class seems to go like a TGV on rails, it is so stable and safe. Even in Comfort mode, the steering has a lot of weight and is extremely precise and progressive. In Sport mode, it gets even stronger and responds even more spontaneously.

These impressions are from the standard version with the standard suspension and steering. But you have the option for the integral steering, which increases agility (the number of turns of the steering wheel decreases from 2.35 to 2.1 in the rear-wheel drive version), reduces the turning circle by 43 cm and, up to 60 km/h, orients the rear wheels in the opposite direction to the front by 2.5 degrees (available only in the package with the adaptive suspension for 3273 euros). A pneumatic suspension is no longer offered because in this segment the demand for this option was below expectations.

With a very low driving position, firm suspension, incisive steering, impressive linearity and feedback and rear-wheel drive, the C-Class offers unprecedented driving dynamics in a Mercedes sedan, while the  suspension comfort is far superior to that of its rivals BMW 3 Series and Audi A4, even in this test version with the AMG line (3094 euros) and 18-inch alloy wheels.

In the new C-Class, the aerodynamics are at another level. In addition to the rear deflector and the typical side sills of the AMG line, we also notice the semi-closed rims, which seem to come from an electric car, and the side vents in the front spoiler, similar to BMW Air Breather, which allow a smooth flow of air next to the wheels.

Better aerodynamics also mean better efficiency. We tested the new 2-liter, 265 HP OM654  diesel twin-turbo engine, which was modified and debuted for the first time on the C-Class.

The displacement has increased from 1950 to 1992 cmc, injection pressure has also increased from 2500 to 2700 bar, the engine is supercharged with two water-cooled variable geometry turbines and also has a NOX catalyst, in addition to a particle filter and two SCR catalysts. In addition, it is combined with a mild hybrid system at 48 V, with 15 kW integrated starter-generator. It develops 265 HP, which is exactly as much as the former 3-liter V6, 3 years ago. And the maximum torque, of 550 Nm, is obtained at 1800 rpm.

With the help of the integrated starter-generator, any pushing of the accelerator pedal determines an instant response of the engine starting from 1200 rpm, and the turbo lag is a thing of the past. The torque is ubiquitous anywhere between 1200 and 4500 rpm and the engine goes up linearly and has a lot of torque from very low speeds.

It harmonizes perfectly with the nine-speed automatic transmission, which, first of all, is extremely comfortable, but can also be fast in Sport mode or if you use ergonomic paddles behind the wheel. Thanks to a high gear ratio between the first and last gear, you can go 100 km/h in the eighth gear at 1300 rpm or 130 km/h in the ninth gear at only 1700 rpm. 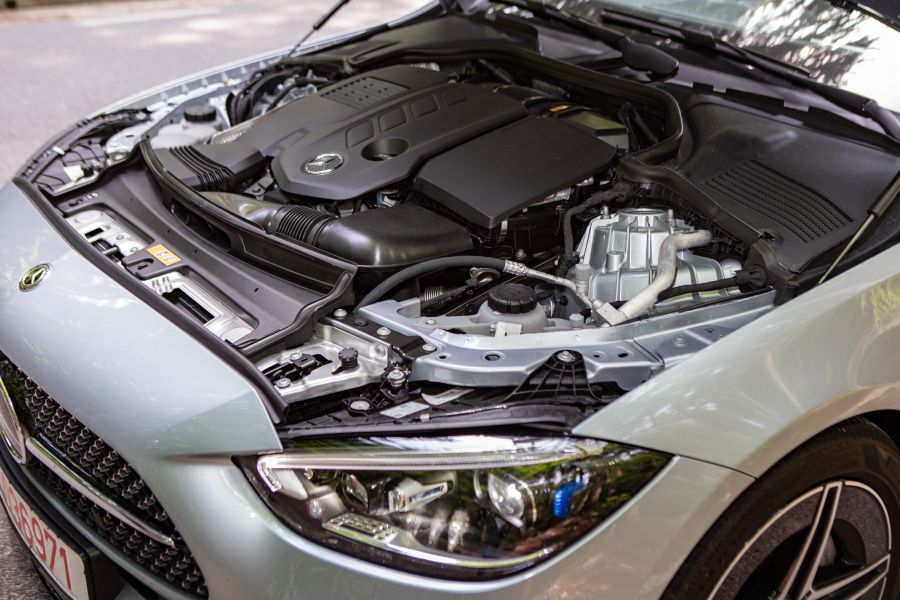 The engine is incredibly elastic and, with a more alert driving, is satisfied with only 7.5 l/100 km. Driven in Eco mode and with a calmer sole, consumption can decrease to 6.5 l/100 km.

And the noise level is very low, because, in addition to the minimal aerodynamic noise and the very quiet suspension, the engine compartment is very well soundproofed and the diesel can only be heard at strong accelerations.

In addition to the full package of assistance systems (the test car had the driver assistance package Plus), the C-Class also comes with a more predictive pre-safe system, which fastens seat belts when the speed difference from the front car exceeds a certain value. This makes you feel very safe, because you know that electronics is already ready to react before you.

verdict
The new Mercedes C-Class is the best C-Class ever built. It combines innovations from the S-Class such as the multimedia system or digital headlights with an extraordinary sportiness for a Mercedes,  low driving position and superb steering. But at the same time, it maintains the class comfort expected of any Mercedes.