First test Mercedes-Benz GLE Coupe. We get behind the wheel of Mercedes’ first-ever SUV coupe to see if our favorite brand can finally put its Bavarian rival to rest.

Mercedes-Benz is back with a credible duo in the intense fought full-size SUV market. BMW has ruled the segment for years with its X5 and its niche-busting X6 brother. But its reign is over. The new king is called Mercedes-Benz GLE/GLE Coupe or Indominus Rex for fans of the Jurassic World saga.

In its quest to create an X6 beater, Mercedes has in fact taken the same path as its rival, mixing svelte, coupe proportions, with the ruggedness only a pure off-roader can offer. In the flesh, the car has incredible presence, offering the imposing look expected from a car of its stature. The GLE Coupe leaves a long-lasting impression, thanks in part to the unexpected contrast between its sheer size and narrow tail-lights, aping the S-Class Coupe’s look. And we’re not even talking about the even more aggressive models wearing the AMG bodykit, a trait which comes as standard for AMG Line models like the GLE 450. 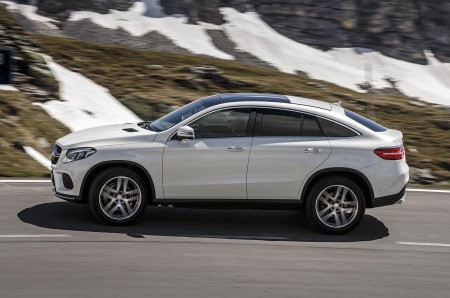 At 4,900 mm in length, 2,003 mm in width and 1,731 mm in height, the GLE Coupe is clearly an imposing car, even compared to the BMW X6 which features a 9 mm longer, 14 mm narrower and 29 mm lower body compared to the Mercedes. The GLE Coupe uses the classic GLE as its starting point but it has, in fact, been re-engineered from the ground-up, the two models sharing only their 2,915 mm wheelbase and steel platform. Mercedes-Benz has modified the axle geometry with track widths that increase by 3 mm at the front and 60 mm at the rear over those of the GLE, at 1,658 mm and 1,725mm respectively. 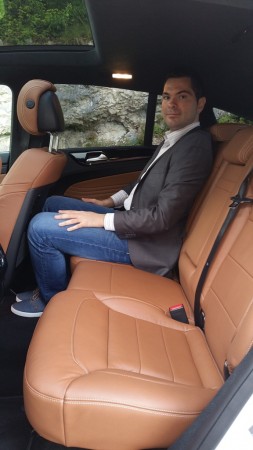 The interior is another successful tour de force, offering all the luxury you’d come to expect from the ‘Starry brand’. There’s no hiding that we get familiar vibes from the general layout of the cabin, borrowed in part from other models. Flanked by the air vents, the familiar central tablet is now placed higher, closer to the windscreen and the direct line of view, featuring a bigger 8-inch screen and rotary dial, reminiscent of those found in the new C-Class or even the Mercedes-AMG GT supercar.

Space is also at the forefront for the GLE Coupe. Despite the slightly reduced headroom compared to the normal GLE, a concession made on the altar of seductive styling a.k.a. sloping roofline, tall adults can travel in great comfort, even in the back. Legroom is well resolved, while the boot is also shooting for the Guinness Book with its class-record 650-litre load-space – which trumps the X6 by a healthy 70-litres, by the way.

At launch, the engine range comes in a broad spectrum of power outputs, from the 367 hp 3.0-litre turbo petrol V6 in the GLE 450 to the entry-level 258 hp 3.0-litre V6 diesel in the GLE 350d. At the top of the top sits the all-mighty Mercedes-AMG GLE 63 with up to 585 hp on tap. In Austria, we’ve sampled the sweet 350d V6 diesel and the snarling AMG GLE 63 S Coupe top-model. The diesel serves up 258 hp, but the healthy 620 Nm torque on tap (at just 1,600 rpm) makes a bigger impression than suggested by the raw figures. The pulling power is amazing with plenty of power reserves in any gear, despite the GLE Coupe’s considerable weight (the diesel tips the scale at no less than 2,250kg). 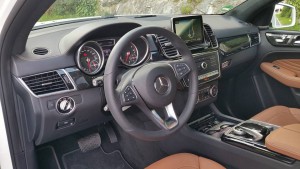 The star of the show is definitely the all-new and super-smooth nine-speed auto box which has already proven its credentials in the E-Class, CLS and S-Class and is combined for the first time with 4Matic permanent all-wheel drive. Mercedes-Benz has finally decided to put to rest its 7G-Tronic unit, reserved only for the top 63 AMG model, for torque related reasons. Brilliant decision! The new 9G-Tronic is a peach. It can even skip individual rations and kicks down faster than you would ever do with a manual – especially in Sport mode, also posing as one of the most relaxed units on the market when cruising. The broad ratio spread also helps keep the revs low, reducing noise and vibration. And it shows, as the GLE Coupe is impressively refined with minimal wind noise, and not much road roar, either.

The mighty AMG 5.5-litre V8 bi-turbo monster is now even more powerful. Mercedes offers it in two outputs with 557 hp and 700Nm in standard guise or as the S Model with 585 hp and 760 Nm at its disposal. Its thoroughbred sports car resources puts the GLE 63 on par with lighter, more focused coupes in therms of performance. In real-life, this means super fast acceleration (quoted at 4.2 seconds for the 0-100 km/h sprint) and an endlessly engaging driving experience, no matter the mood you’re in. The Mercedes-AMG GLE 63 Coupe always puts a big smile on your face. Or is it a grin? Just put the rotary dial of the standard Dynamic Select handling system in its fifth setting (the AMG offers five instead of four programs), called Sport+, and you’ll definitely agree with us. 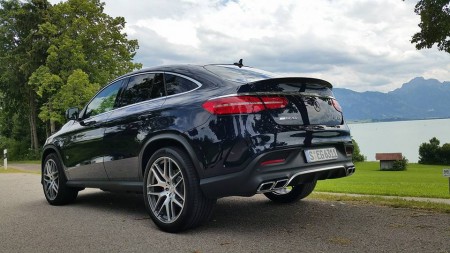 All GLE Coupes get standard 4Matic rear-biased all-wheel drive with a 40:60 torque distribution. If needed, 100% percent of the torque can be sent to the appropriate wheels, either to the front or the back. Mercedes’ Dynamic Select system and Airmatic adaptive suspension also come as standard. The driver can alter the throttle response, steering weight and firmness of the dampers. In Comfort the Coupe plays the magic carpet role, wafting along unsettled even by undulating surfaces. Ramp things up to Sport and the suspension does leans on the firmer side, denting the ride quality. But only marginally. Sport or Sport+ mode (available only for AMG and 450 models) reduces roll and hides effectively the GLE’s considerable 2-tonne plus bulk.

Another plus is the standard Sports Direct-Steer system, which, in the Sport setting particularly, is as weighty as you’d expect from a car with Coupe credentials, giving a reassuring feel of solidity. A refreshing approach in light of more light (read as devoid of any feeling) solutions offered by some of its rivals. In the end, the occasionally firm suspension is just a small niggle, especially if you’re after more control and juicing the best dynamic abilities out of your car. And you most probably will be since you’ve chosen the GLE Coupe instead of its regular stable-mate, in the first place. 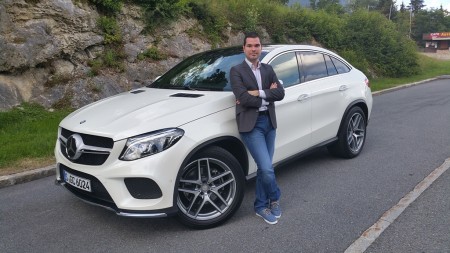 So what’s the VERDICT? Mercedes-Benz succeeded to create a segment-busting model that easily trumps its closest rival (and only rival, for that matter), BMW’s X6, in therms of image, quality and sheer presence. Practicality and generous equipment are also big pluses. The gentle but fast 9-speed automatic transmission makes a dream team with the standard fit 4Matic all-wheel drive system while the direct sporty steering confirms the GLE Coupe’s sporty credentials.