Mercedes says “Game over” and gives up the concept of crossover by replacing it with a genuine SUV. Test drive with the second generation of the GLA in the Mercedes-Benz GLA 200 d 4Matic version.

Mercedes had a slightly unconventional approach on the GLA former generation  Although the car maker was very successful with the SUVs in the upper classes, in the compact class they preferred to offer a crossover that was a kind of higher A-Class, but not a real SUV that would fight against the BMW X1, Audi Q3 or VW Tiguan.
Mercedes is now going straight forward chasing the aforementioned competitors, saying goodbye to the idea of ​​crossover and coming up with a genuine compact SUV with typical proportions. 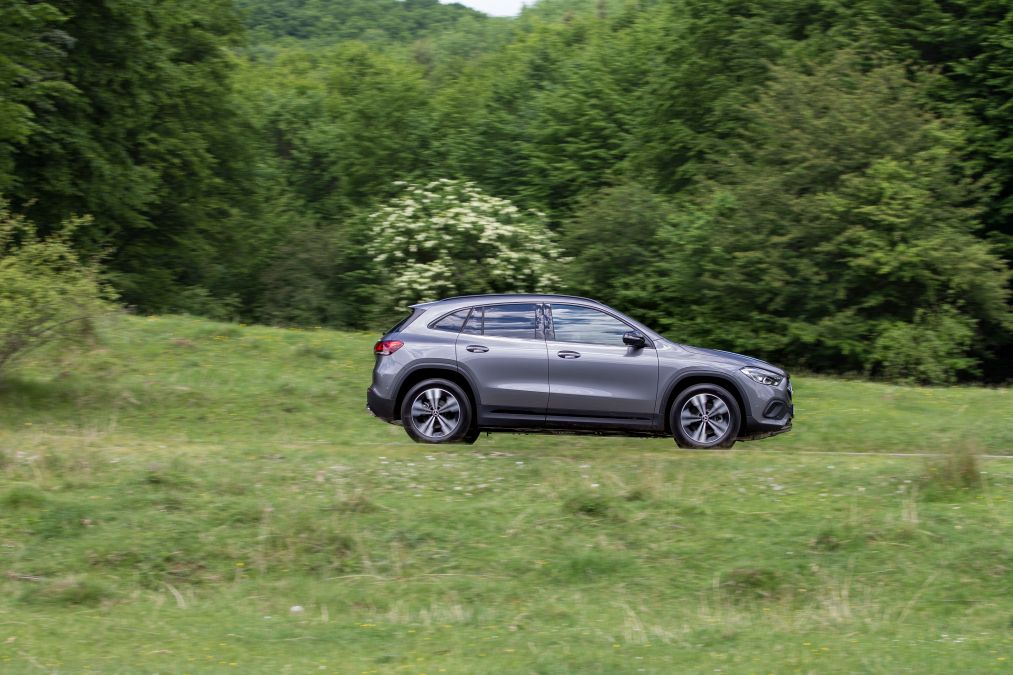 First of all we have to say that the new GLA is built, like the other Mercedes compact models are, on the new MFA2 platform, which is an evolution of the old MFA. MFA2 comes with many improvements including a longer wheelbase (2,729 mm compared to the previous 2,699 mm), better sound insulation, superior driving refinement and a more rigid body structure.

Surprisingly, the ground clearance remained small for an SUV, being only 143 mm (+9 mm compared to the former generation). Such a pity it is that Mercedes does not provide a higher one, especially since the 4Matic all-wheel drive and the Off-road package (standard for the 4Matic versions) would allow access to more difficult areas. Ground clearance clearance though limits access.

Instead, the track is 36 mm wider at the front and 46 mm at the rear which improve lateral dynamics.

The Mercedes-Benz GLA takes over the very good modularity of the B-Class with the rear seats sliding 14 cm (428.40 euros) forward and a front passenger seat with a folding backrest (178.50 euros). while the rear seats split 40/20/40% and the reclining backrest with various angles are standard equipment. Thus, if necessary, long objects can be transported by folding the backrest of the right front seat or increase or decrease the volume of the trunk by moving the rear bench.

In the rear , the passengers sit comfortably in seats with a very well-profiled backrest and a sufficiently long seating area. The bigger height and longer wheelbase provided more space in the rear. Passengers benefit from more headroom and especially more kneeroom, because the kneeroom has been increased by a valuable 12 cm. In addition, the interior offers the feeling of a more airy space. There is more room for the shoulders and you no longer have that feeling of claustrophobia conferred by the small windows and the high body line.

Standing 97 mm higher than in the previous model, the driver has a better view of the road and in addition the all-round visibility is superior. The front seats are relatively hard, but excellently profiled, have separate headrests and manual adjustment of the seat length (standard on the Progressive equipment line 1,814.75 euro, you can also opt for Style and AMG). The Progressive line also comes with Artico synthetic leather upholstery, leather-wrapped multifunction steering wheel and 18-inch alloy wheels, while the porous matte black lime wood trim (309.40 euros) on the dashboard and door trim looks gorgeous.

Mercedes communicates a boot volume of between 425 and 1,420 liters, slightly larger than the former model, but does not look very spacious and the height of the trunk is relatively small due to the rather sloping rear window. By comparison, the BMW X1 promises between 505 and 1,550 liters. Instead, we appreciate the movable floor that can be mounted on two levels. With the floor at the top level, an almost flat loading surface can be achieved when folding the backrest of the rear seats. We also appreciate the trunk larger width by 85 mm and the lower loading edge by 50 mm. 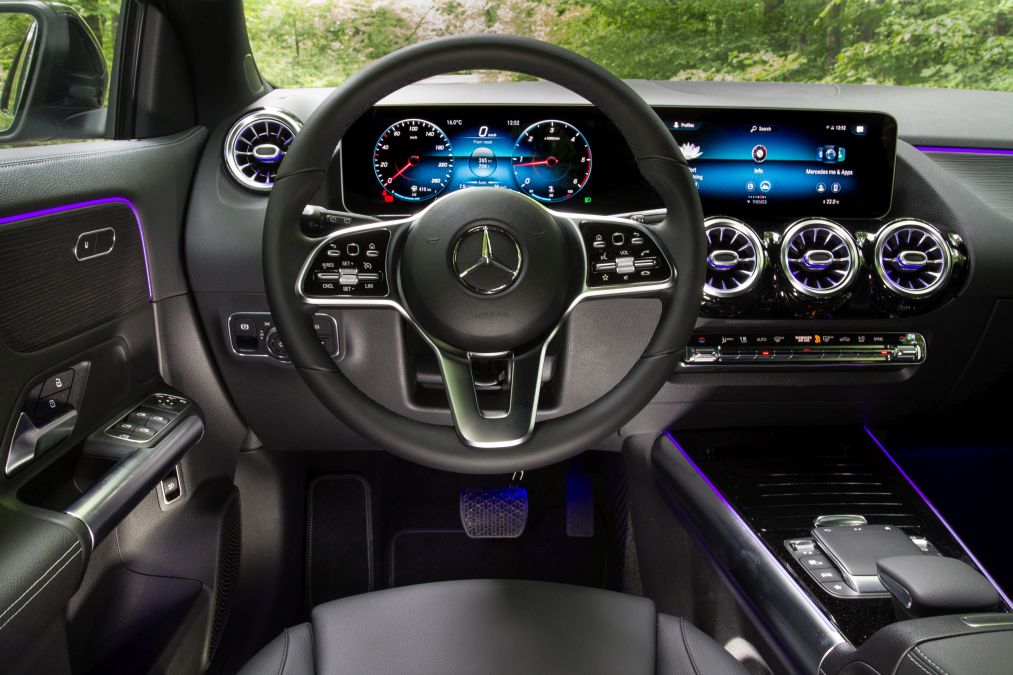 The elegant interior comes with a price. Mercedes-Benz GLA 200d 4Matic in the test starts at 40,995.50 euros and with the optional equipment available on the test car, that were not opulent, it reaches almost 50,000 euros. LED headlights are standard, but the Premium package is worth checking, because it comes with the MBUX system with hard disk navigation and the good-looking 10.25-inch screens costs 3,552.15 euros.

On the other hand, for the base price of 40,995.50  euros, the customer receives the excellent OM654q transversely mounted diesel engine, an 8-speed automatic transmission with double clutch, all-wheel drive and 18-inch wheels. We must also say that, unlike other Mercedes compact models, the basic diesel is no longer the small 1.5 liter from Renault, but also a variant of the 2-liter Mercedes engine. Thus, customers have at their disposal the 2-liter OM654q diesel engine in three output variants: with 116 HP (instead of the former 1.5 at GLA 180 d), 150 HP (GLA 200 d 4Matic, test model) and 190 HP (GLA 220 d 4Matic).

The test model was equipped with the standard Comfort suspension, but you can also go for the Comfort suspension with lowered ground clearance (440.30 euros), that I came across in test drives with other compact Mercedes models and which is an even better compromise. And for 1,178.10 euros, you can even tick the box of an adaptive suspension.

When driving, the Mercedes-Benz GLA feels very cohesive and impresses with the very good rigidity of the body. The name of the Comfort suspension is relative because it is quite hard. In combination with the standard 18-inch wheels, the GLA provides very good comfort when driving along the highway, but when crossing short bumps, the rear passengers will feel that the damping is quite hard.

Instead, the Comfort suspension is ideal on windy routes where the roll is moderate to low and offers great driving pleasure, although agility is not the strong point of this heavy SUV, which has a 1,670 kg kerbweight. 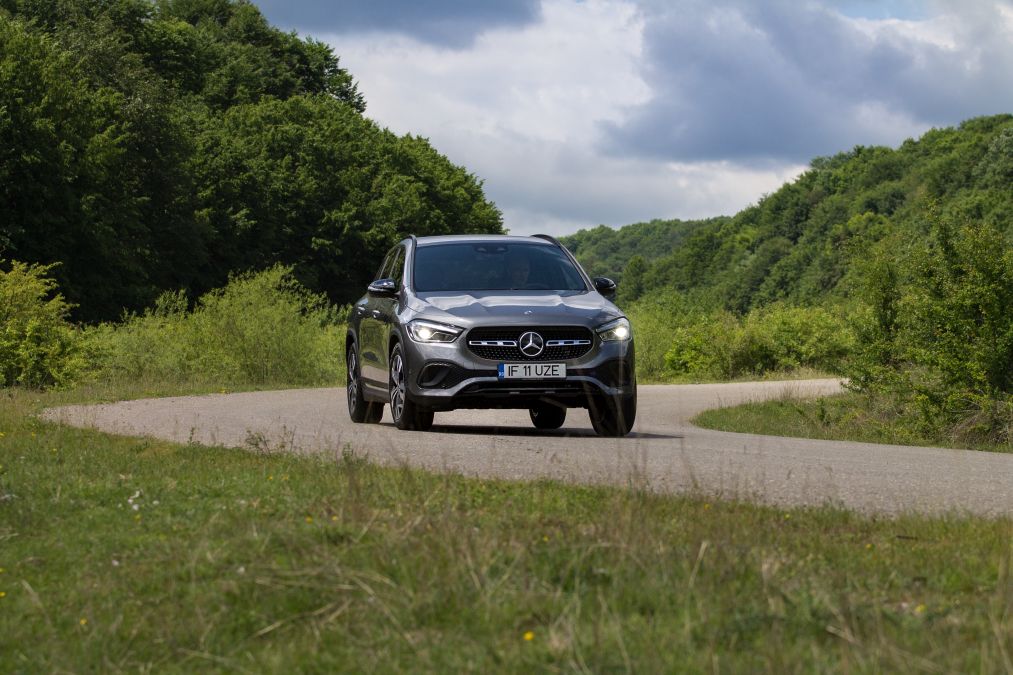 The driver has Eco, Comfort and Sport modes available. Things change a little if you switch to Sport mode, because the front/rear torque distribution goes from 80/20% front/rear to Eco / Comfort modes to 70/30% for Sport.

The ambiance on board is quiet, but there are some rolling noises caused by the fairly wide tires. Also, the transversely mounted 2-liter OM654q turbodiesel engine is slightly noisier, when increasing speed than in other models in which it is mounted longitudinally such as the C-Class or the GLC.

The 4Matic versions come with the standard Off-road package. When the Off-road mode is engaged, the torque distribution is 50/50% and the interaxial coupling acts as a lockable differential. The Off-road package also includes an animation with torque distribution similar to what we see in some Porsche models, but also an assistant for descending slopes. In Off-road mode, the GLA has very good traction and off-road comfort is very good, despite the relatively firm adjustment of the suspension. 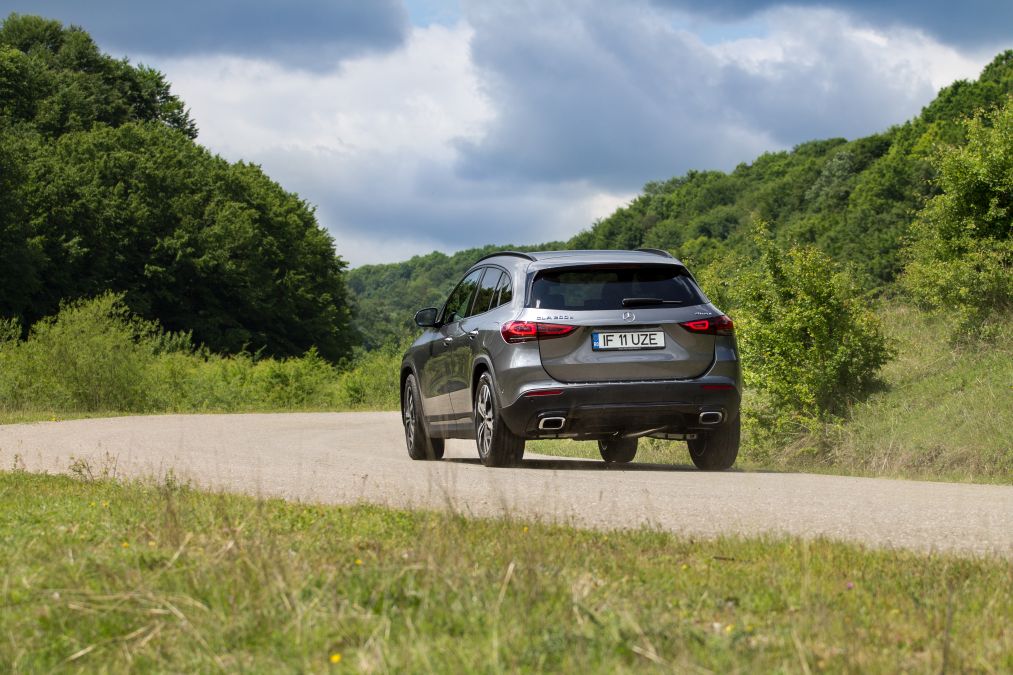 In a straight line on the highway, the Mercedes-Benz GLA 200 d 4Matic gives a great feeling of safety and the road holding in a straight line is better than that of the BMW X1 for example, which is more nervous due to a more sensitive steering.

The 2-liter turbo diesel engine with 150 hp is distinguished by a vigorous pulling force, because the maximum torque of 320 Nm is available from 1,400 rpm and remains constant up to 3,200 rpm. The 8-speed automatic transmission with double clutch shifts comfortably like a gearbox with a torque converter, but also fast at the same time and the driver also has the paddles behind the steering wheel for manual shifting. Only at start-up, the automatic transmission has a slight hesitation. The eighth gear is long enough to save fuel on highway speeds. Because it all comes down to consumption, Mercedes announces an official consumption of 5.6 l/100 km and we achieved a combined value of 6.7 l / 100 km, competitive for this segment.

The second generation of the Mercedes-Benz GLA is a genuine SUV and the elegant, quality and solidly built interior will surely steal the hearts of more customers from the BMW X1 and the Audi Q3. The standard suspension offers a good compromise and the standard equipment is decent. But the competition also comes from the Mercedes GLB step brother, which is bigger, more practical, features a 7-seater options and costs only 1,200 euros more. From the engine perspective, the Mercedes-Benz GLA 200 d 4Matic offers the best compromise.