First test 2019 Mercedes GLE. Mercedes has a long standing tradition in the luxury SUVs segment, so, if the Germans say they have surpassed themselves this time, they have our full attention. We gathered the best impressions from Autobild, Auto motor und sport and AutoPlus.

Essentially, this is the second generation GLE, but also the fourth generation M-Class. In 2015, Mercedes changed the birth certificate of its large SUV to put more logic into the line-up. This time around Mercedes has opened all technical registers in Stuttgart and the GLE comes with a number of firsts, the most important of which are: 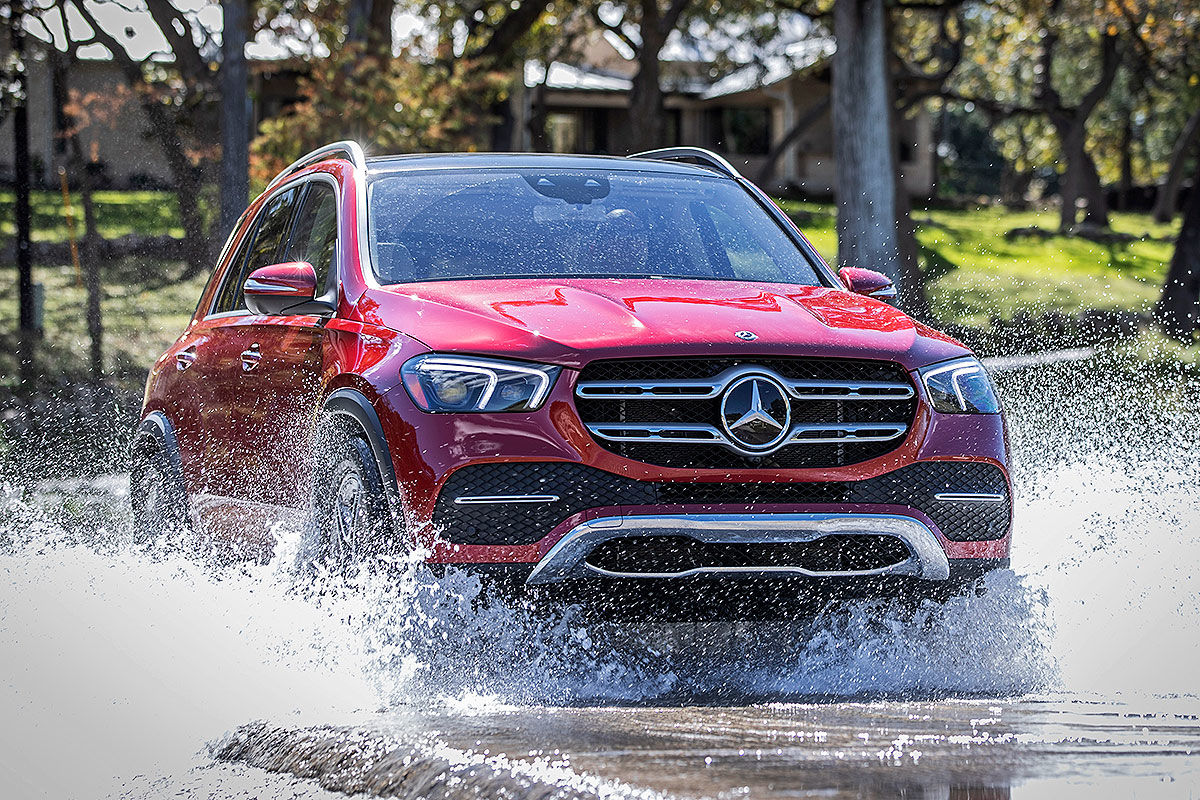 Supported by the 48-volt electrical system, the springs and dampers, which are based on the well-known “Airmatic” air suspension, adapt to fully automatic driving situations. “Smart” pumps on each wheel provide the dampers with oil in milliseconds, raise or lower the body. If the front camera sees a pothole coming, it sends this information to the hydropneumatics, which then iron out the street pain as if the ground were a fluffy carpet. Spring and damper forces are individually controlled on each wheel, which prevents not only roll but also pitch and stroke movements. The result is a comfort that we have never experienced in an SUV.

The Curve mode of the Dynamic Drive Select allows the GLE to tilt slightly in the curve. Somewhat like a motorcycle, of course with the restriction that the Mercedes allows that for a maximum of 3 degrees. The idea is that, by lifting the outer air springs a little higher in a bend, you help the inner wheels stay flatter on the road. A maneuver that offsets part of the lateral forces exerted which in turn should provide more comfort to the occupants.

To be honest, in practice we have felt little difference. Except perhaps in the steering wheel where the extra bend is valid through the additional corrections that you have to make. Then we are more enthusiastic about the added value of the system outside the asphalt: it gives you 6 centimeters more maneuvering space per wheel, on top of the 12 centimeters of ground clearance that you gain anyway by scrolling through the driving software and choose the Offroad mode. So you can raise the right front wheel higher, completely separate from the left one, or the left at the back of the GLE a lot lower. It will be completely funny if you ask the Off-road assistant to dance through the central screen. Take that literally: in the Rocking mode, the system pumps the GLE up and down repeatedly, allowing the car to roll freely, improving traction itself. The initial intention behind break dancing is to cut you loose from sand or snow, although it is just as funny to see it in action (up to 9 km / h) on mere asphalt. Does the GLE come with revolutionary engines, too?

The base engine for the market launch is the 245-hp GLE 300 d 4MATIC. The four-cylinder turbo diesel develops 500 Newton meters of torque and costs at least 65,807 euros. Moving up the line-up, future clients can order the inline six-cylinder turbo GLE 450 4Matic, credited with 367 hp and 500 Nm. The six-cylinder costs at least 72,650 euros. The pick of the range could be the new inline six-cylinder diesel GLE 400 d (330 hp) – there will also be a GLE 350 d with 272 hp. This is currently the cleanest diesel in the world. Thanks to a second, passive SCR cat, the engine already complies with the Euro 6d emission standard, which will only come into effect in January 2020. According to Mercedes, more engines, including a plug-in hybrid will follow. The automatic 9G-Tronic is standard across the range.

In practice, the 300 d sounds unexpectedly rough. Kudos to Daimler for trying to artificially transform the awkward pitch of the four-cylinder via loudspeakers at the rear into a sporty sound – though without success. In the end, the small diesel is simply too powerless, too rough. The turbo inline six-cylinder gasoline engine in the GLE 450 (367 hp) doesn’t produce a much sweeter soundtrack – at least it has enough punch. The surprise is the six-cylinder diesel in the GLE 400 d (330 hp). It makes a discrete, cultured noise and with the forms a dream team with the nine-speed automatic standard gearbox.

There is the additional field acceleration if you opted for the off-road package: The advanced four-wheel drive now distributes the torque between 0 and 100 percent on the two axles. And then of course there is the 48 volt electrical system, needed to keep the lion’s share of the technological highlights going. A stronger power supply that is not offered on the new four-cylinder in the 300 d and 350 respectively which their regular 12 volts architectures.

The standard 48-volt system with integrated starter generator not only reduces fuel consumption, it also provides short-term 22 hp and 250 Nm additional power via the boost function.

If you push the six-cylinder, you hit 100 km / h in 5.7 seconds. Of course there is also an ecological edge to the electrical unit, although the average consumption remains, despite the help and the good aerodynamics (the Cx value of 0.29 is a record in this class, but a figure that you only get with the 18-inch wheels), at 9.4 liters per 100 km (214 g / km CO2) on the high side. This also comes down to the weight of 2.2 tons. Interior: from high-tech to practical ingenuity

The cabin is where the true revolution happens. And we should start with the practicality. The wheelbase grew once again by 8 centimeters: the rear passengers can enjoy mostly the generous legroom. Also on the third row, the space is now called ‘generous’. The trunk with its 630 liters gains an extra 60 liters compared to its predecessor, with a maximum loading capacity of 2.055 liters when you fold down everything. That is clearly above average in class.

The workmanship and choice of materials are consistently first class. The controls for the seat adjustment and the buttons of the power windows, for example, are covered with metal and feel very pleasant. And, above all, the interior simply looks delicious and high-tech. With those two 12.3-inch large screens concatenated into one large display, the GLE preaches a modernism tale that was previously foreign to him. Behind that tablet-like arrangement ticks the MBUX infotainment system. The menu structure and basic features have been taken over from the A-Class but have been expanded with a lot of software that will bring well-being to unprecedented heights – of course, apart from the touchscreen, the system can also be operated with gestures. A first in the SUV is the proximity sensor. If you approach the touchpad on the center console or the touchscreen with your finger, the system is already responding. In addition, gestures can be assigned for certain functions. For example, when the passengers make a gesture in front of the display, the ambient lighting menu is automatically opened.

The best of the best is the Energizing Comfort Control which arranges a specific atmosphere via music, massage, lighting and a suitable screen saver on the central infotainment screen. A choice that you can leave to the Energizing Coach that will come up with proposals, depending on the situation. If you have a smart Garmin watch, your ‘trainer’ also immediately takes into account a number of physical parameters, genre stress or sleep hours. Another function is the Energizing Seat Kinetics which seeks to keep you fresh by regularly adjusting the position of your chair. Do not be alarmed if your seat and backrest suddenly move. After all, they think of your well-being – everything supplemented with the massage functions. 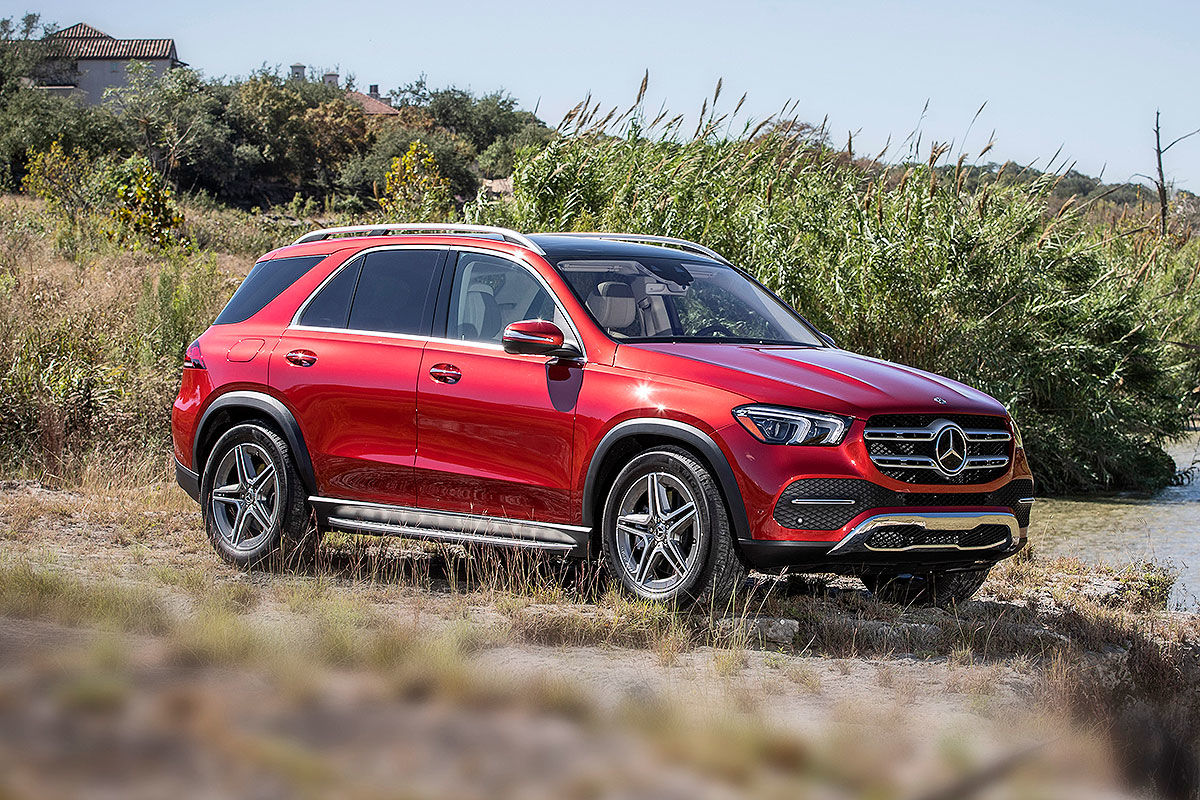 Mercedes has not waited for the next generation S-Class to put its latest high-tech technology in the spotlight and the fact that the GLE receives that honor, shows how important the SUV is for the company. The GLE is still the practical and very pleasant travel companion that will carry you and your family around the world in complete comfort.