Mercedes revises the C-Class. The design is changed only marginally but there is a lot of new technology on board. FIRST TEST 2018 Mercedes C-Class facelift via Autobild.de.

The current Mercedes C-Class has been on the market for almost four years and is still extremely popular among customers. So popular that almost every fifth new Mercedes is a C-Class. Now it’s time for a facelift – and not to scare the customer, the update is optically more than cautious. With 6500 new parts it is on paper the most extensive facelift in the history of the model, but the new parts were hidden well. Even brand connoisseurs have to look twice to recognize the facelift of the C-Class. The front aprons of all equipment variants are slightly changed. The same applies to the radiator grille, the AMG Line is now available as standard with the diamond grill, the Exclusive Line carries the star on the hood. 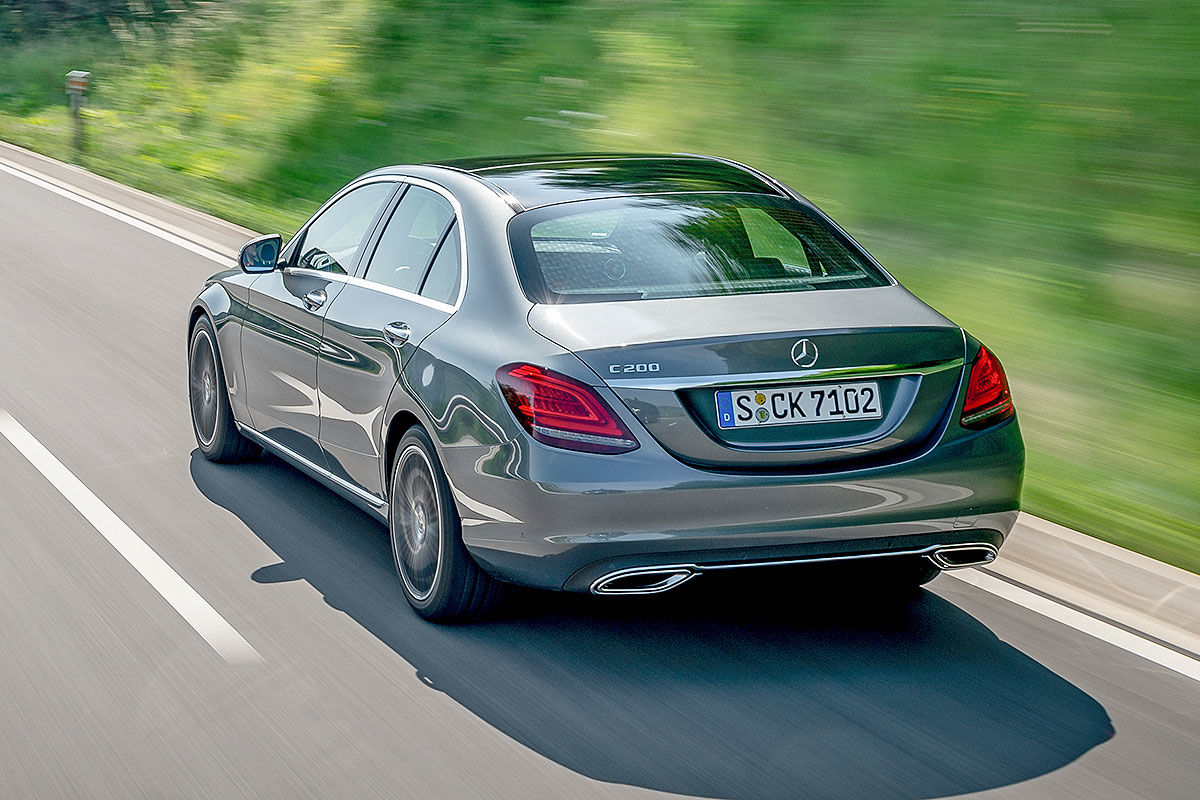 At the rear the facelift can be recognized thanks to a newly designed lower part in the apron. The illuminated graphics of headlamps and taillights have also been redesigned. The fresh C-Class comes standard with halogen headlights. While Mercedes deliberately withholds the appearance of the C-Class facelift, there are some important news on the technical side – especially in the areas of driver assistance systems and networking. The revised C-Class is available from July 2018 with a large range of engines at dealers. Let’s go at just under 40,000 euros for the Mercedes C 200.

The most important info first: Mercedes does not offer the widescreen cockpit in the C-Class not even for a surcharge. The reason: The technical effort would be too big for a facelift. With about 6500 new parts, the model maintenance is already the most expensive update in the model history anyway. As standard, the facelift model continues to rely on a classic two-tube instrument cluster and a seven-inch screen above the center console. For 893 euros extra offer a fully digital instrument display in 12.3 inches, which is definitely worth the money. The presentation options are extremely diverse, so there are three different styles available. All in all, the fully digital display is very reminiscent of Audi’s Virtual Cockpit – with the difference that the Mercedes does not use the complete display to show Navi maps. In addition, the screen above the center console measures 10.25 inches on request. This combination compensates for the absence of the widescreen cockpit. 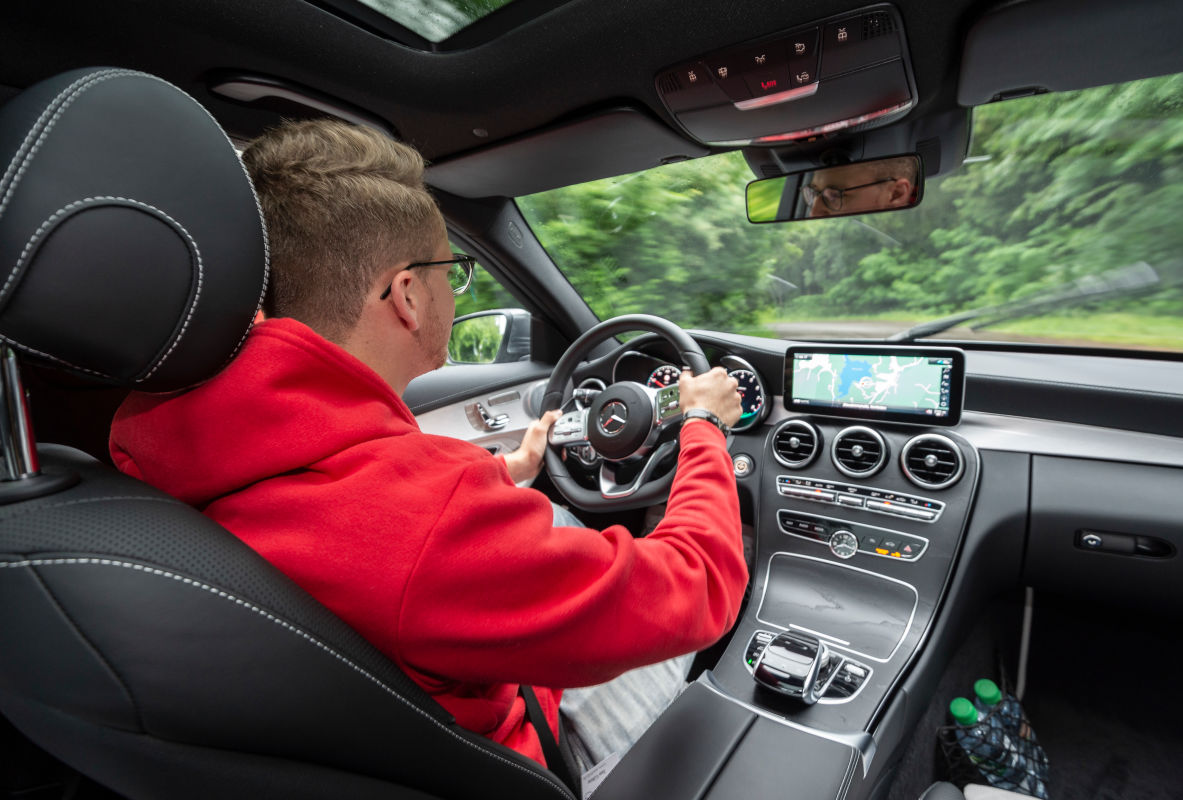 In addition, the C-Class gets the new steering wheel including the well-known from various models touch buttons. Compared to its predecessor, the cruise control lever on the left side is also eliminated. The cruise control settings go (as in the competition) into the steering wheel. Other changes only concern details: The start / stop button has been redesigned and is now standard, so that the key can always stay in your pocket. Our test car was also equipped with the new magma gray / black designo interior. Sitting position and material processing are still good.

Under the bonnet of the fresh C-Class works the new four-cylinder engine M 264 with 1.5-liter capacity and a 48-volt electric system. A belt-driven starter-generator (RSG) replaces the conventional starter. Means: For example, when rolling towards the traffic lights, the engine turns off at 8 km / h. Once the car acelerates, the four-cylinder jumps on extra quickly. To be precise: within 400 milliseconds. The process is much more comfortable than with many other start / stop systems.

The 184 hp C 200 pushes at low speeds surprisingly strong. This is due to the EQ boost, which supports the burner from idle speed not only with 14 additional horsepower, but especially with 160 additional Nm. So accelerates the base model in a whopping 7.7 seconds to 100. The engine is quite loud at 4500 rev / min. Turning off the gears is not necessary, after all, the well-known Neungang automatic has the right gear for every situation and generally works extremely calmly and reliably. This ensures that the C 200 is very quiet on low rpms. The Dynamic Body Control suspension avalailable for 1071 euros extra has also been revised in detail by Mercedes. This is why the facelift of the C-Class drives comfortably – even without the even more expensive Air Body Control air suspension. 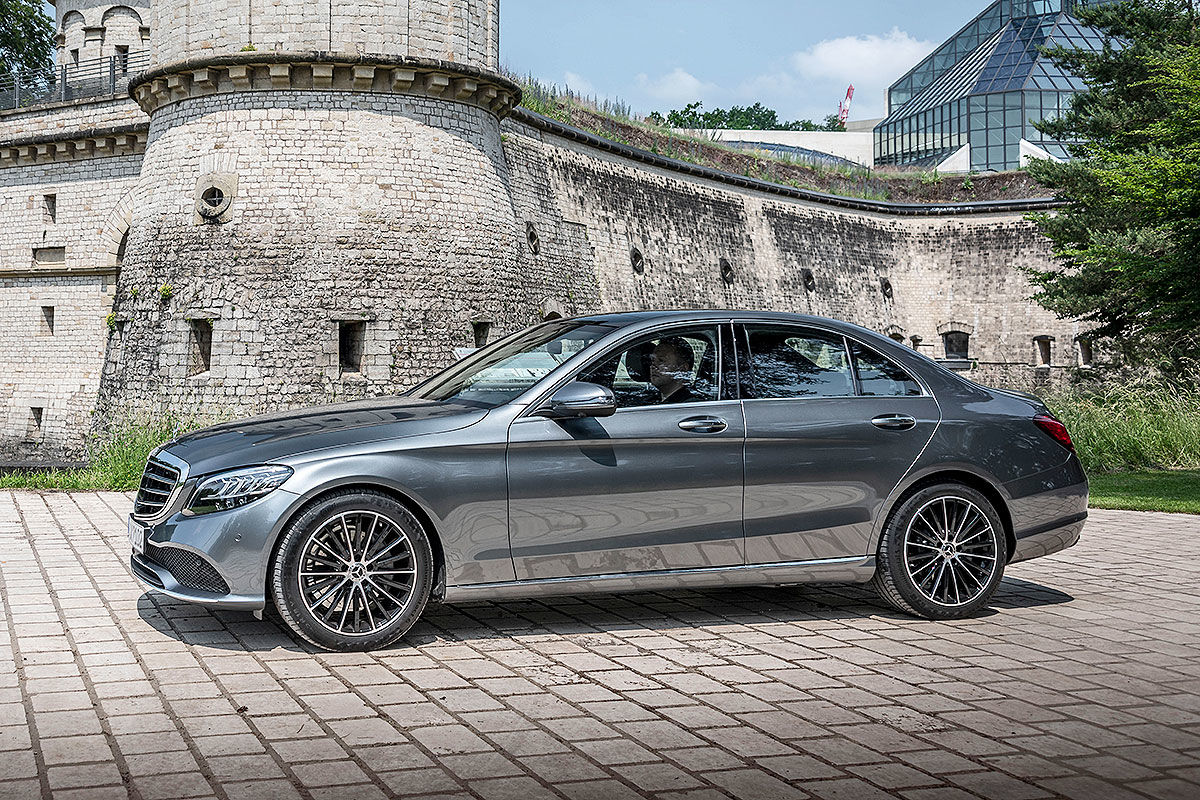 Driving Assistance Package Plus is a real relief
The new driver assistance package plus (2499 euro surcharge) comes from the S-Class and relieves the driver of most duties epecially on long autobahn passes. This is how it works: The steering wheel buttons are used to set the speed and the desired distance to the vehicle in front, and if desired, the C-Class can also keep track of it all by itself. Important: If you let your hands off the wheel for 15 seconds, you will get a warning message. If the hands remain off the steering wheel, the system switches off. And the C-Class can now change its lane, just like the E- and S-Class, on its own: with the systems switched on, it is sufficient to tap the turn signal – and within a very short time the camera and radar sensors check the surroundings. If it fits, the C-Class will change the track automatically. At the end of the test drive, of course, we are interested in what the fuel-saving technology including downsizing, revised start / stop system and new aerofoils brings in real consumption. Mercedes indicates the C 200 consumes 6.0 to 6.3 liters per 100 kilometers. After 100 kilometers of highway, highway and city, the on-board computer displays a sobering 10.7 liters. Although this value is still improving to 8.9 liters of average fuel consumption after around 150 kilometers of driving, the bottom line is still too high.

Connectivity: driver assistance systems from the S-Class
The digital instrument display and the screen above the center console can be operated via the touch buttons in the steering wheel, via touchpad and controller (with haptic feedback) or with the advanced voice control. As in the E-Class and the S-Class facelift, vehicle functions such as seat heating can be operated via Linguatronic as well. Although this works well in the test, the C-Class is still a long way from the intuitive MBUX A-Class voice control system. Customers have to wait until the next generation for this function*. Also in the driver assistance systems, Mercedes has refilled again: For example, the camera and radar systems were improved in the facelift of the C-Class, also from now on also navigation data for assistance functions are used. The extended active brake assist is standard on board. The Comand system has been upgraded with faster 3D HDD navigation and 3D building visualization. For the C-class there is also the well-known concierge service and inductive charging. 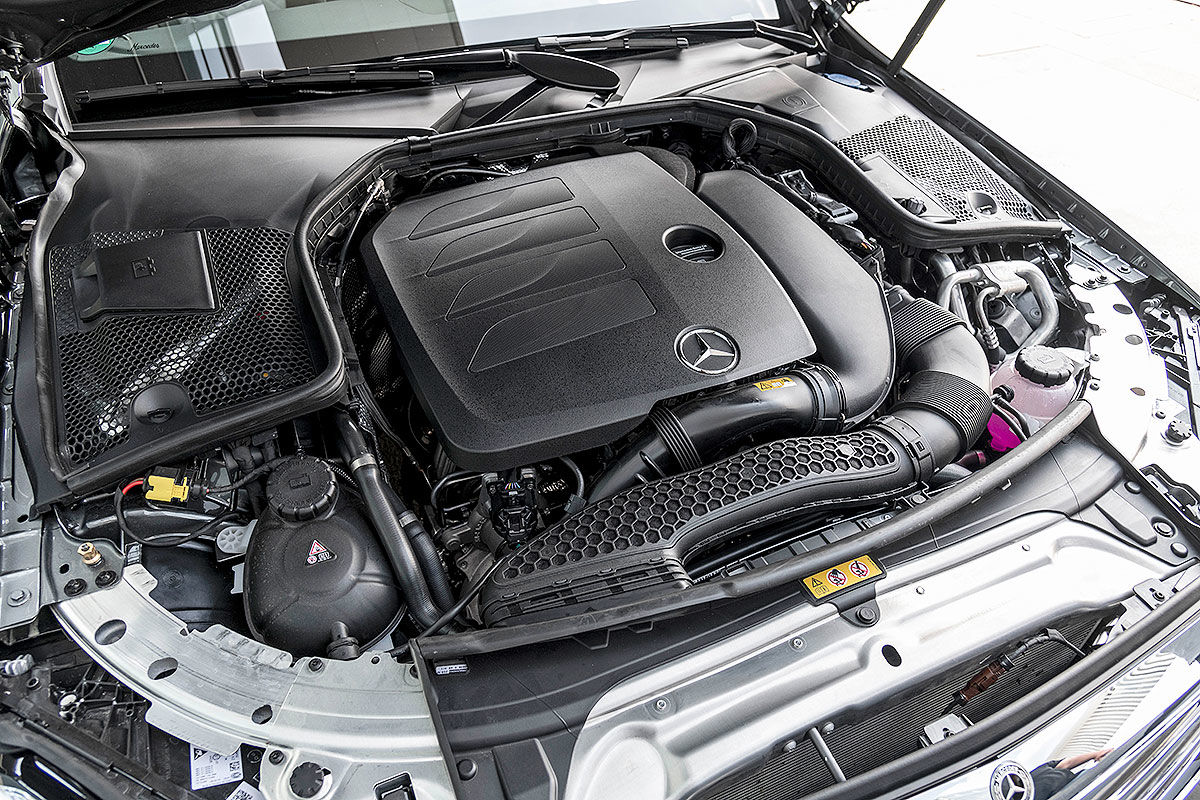 The C-Class starts with a wide range of engines, including completely new units. The C 200 puts a 184 hp four-cylinder gasoline engine with 1.33 liters displacement (M 264) from Renault under the hood. Always on board is a 48-volt system with belt-driven starter generator. The electric motor ensures that turbo lag is eliminated when accelerating, also the car can sail like that. The new C 220 d has a four-cylinder diesel with 194 hp. Very important: Both new engines meet the strict Euro 6d TEMP emission standard. Prices start for the C-Class facelift at 39,948 euros for the C 200. In addition, the C-Class will be available with a 160 hp diesel engine (200 d) and an even smaller entry-level diesel with 122 hp (180 d), top diesel should be the new C 300 d. In the gasoline range, the offer is similar: In addition to the entry-level C 200, there are the C 300 with 258-horsepower four-cylinder and the C 400 4Matic with 333 hp V6. The AMG models C 43 with now 390 hp and C 63 with up to 510 hp are ranked higher. Somewhat opaque are the market starts of the individual engines at Mercedes. Not all engines can be ordered from now on, some variants will be added – of course within the first few months, assures Mercedes.