The seventh generation Mercedes S-Class W223 launches a new challenge to rivals BMW 7 Series and Audi A8. How advanced is the new S-Class compared to its traditional rivals? the first static comparison.

Theoretically, the Mercedes W180, launched in 1954 and known as the Ponton, was the first luxury limousine to be retroactively associated with the Mercedes S-Class.
They were followed by the W112 in 1959, known as the Fintail, and the W108 in 1965. But the first Mercedes luxury limousine to bear the S-Class appeared only 18 years later in 1972. It was the W116 produced between 1972 and 1980.

Rivals BMW 7 Series and Audi A8 do not have such a rich history but through the technologies used they successfully competed with the reference from Stuttgart even if they never managed to reach the sales figures of the S-Class.

Now, with the launch of the seventh generation Mercedes S-Class  we want to see what strengths the new generation S-Class has in the face of rivals.

Although it has been on the market for several years, the BMW 7 Series has only one 3 liter 6-cylinder inline engine with 340 HP that does not have mild hybrid technology.
Then, just like the Mercedes S-Class W223 , two 3-liter  6-cylinder inline diesels are available with  almost the same power as the S-Class: 286 HP at 730d/730d xDrive and 340 HP at 740d xDrive.
A special model is the BMW 750d xDrive equipped with the 400 HP quad turbo diesel engine, which will disappear at the end of this year due to strict emission norms.

The BMW 7 Series also has a Plug-In Hybrid version but it has only 394 hp and the electric range is half that of the new S 580 e being only 50 km. BMW’s current advantage is that it offers the PHEV version with both rear-wheel drive and all-wheel drive (in the long version) while the Mercedes S 580 e has only rear-wheel drive.

Audi has also begun electrifying the A8 range. The base engine in Audi is a 3-liter mild hybrid V6 in which the 340 HP thermal engine is supported by an integrated 16 hp all-wheel starter (A8 55 TFSI quattro). Then, the 4-liter twin-turbo V8 engine has 460 hp in the A8 60 TFSI quattro.

Audi also has an A8 plug-in hybrid in its catalog, but just like the BMW 7 Series, the Audi A8 60 TFSI e has an electric range of only 47 km. The 3-liter V6 thermal engine with 340 HP and the 136 HP electric motor together develop 449 HP. For those who want a sports limousine, Audi offers the S8 model in combination only with the standard wheelbase body that has a 4-liter twin-turbo V8 engine and 571 HP under the hood.

For diesel fans Audi offers Audi A8 50 TDI quattro (3-liter V6 with 286 HP) and A8 60 TDI quattro with the fabulous 4-liter V8 and 435 HP. Just like BMW’s quad turbo diesel engine, this V8 diesel will disappear at the end of the year, falling victim to increasingly stringent emissions.

One of the most important technical innovations from the Mercedes S-Class is the new integral steering. In fact, Mercedes offers two types of integral steering: one with a steering angle of the rear wheels of 4.5 degrees and the second with a steering angle of 10 degrees. Each of them costs an extra 1508 euros. The Airmatic adaptive air suspension is standard. The revolutionary E-Active Body Control suspension will be available later.

BMW and Audi have been offering integral steering for many years but the steeriong angle of the rear wheels is smaller, of maximum 3 degrees. At BMW it costs 1413 euros and in addition BMW offers a system of active stabilized bars called Executive drive Pro which reduces body roll to a minimum in corners (2875 euros). Adaptive pneumatic suspension is also standard. In addition to the 8-speed Steptronic automatic transmission, a Steptronic sports automatic transmission is also available, which costs an extra 292 euros.

In this regard all three models offer top multimedia systems. But as in the field of hardware and software things progress faster than in the case of mechanical systems (engines and transmissions), the newer model is advantageous.

Thus, the new Mercedes S-Class W223 has a second generation MBUX multimedia system that is faster and smarter. In the top version, the MBUX multimedia system comes with a 12.8-inch OLED portrait screen (standard 11.9 inches). The instrument cluster is displayed on a 12.3 inch display and can be viewed optionally in 3D format without special glasses (1148 euro), also benefiting from facial recognition.

The new Mercedes S-Class also comes with two new head-updisplay. The larger HUD display (3468 euro) allows AR content. Thus, during navigation, the arrows are projected virtually on the road. Active Distance Assist information is presented for the assistance functions – the image appears, virtually, at a distance of 10 m. The display area corresponds to a monitor with a diagonal of 77 inches.

The “Hey Mercedes” voice assistant is now even more able to learn and interact, by activating online services, within the Mercedes me App. Moreover, certain actions can be performed without the activation phrase, “Hey Mercedes”. These include answering a phone call. “Hey Mercedes” now explains the car’s functions and answers general questions. In the New S-Class, the voice assistant can also be controlled by the rear passengers.

Also optional, the Rear Seat Entertainment package (3468 euro) allows you to set up two 11.6-inch screens in the rear  and a 7-inch tablet in the rear armrest. 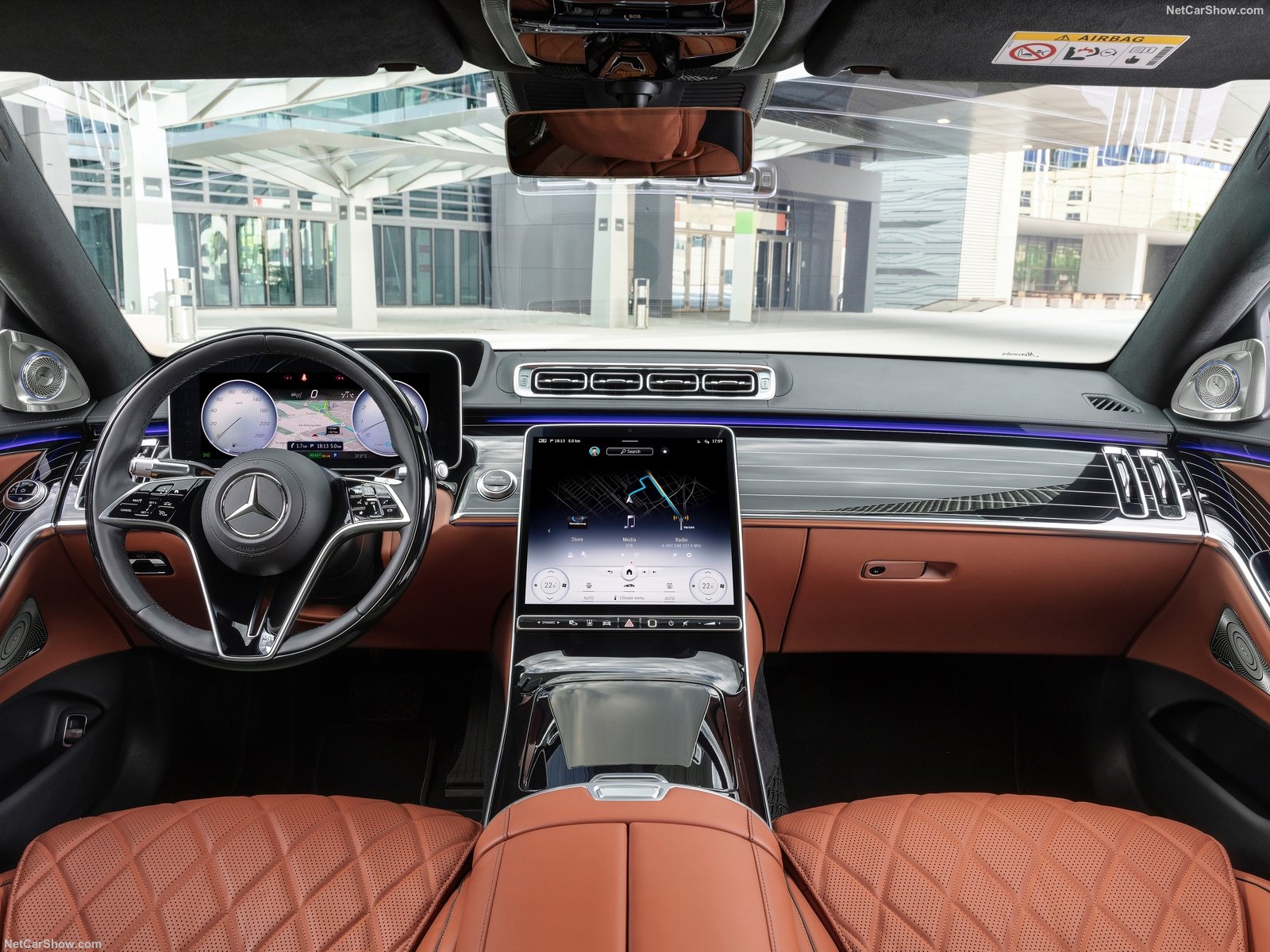 The Audi A8 also comes standard with a 10.1-inch touchscreen MMI multimedia system, 8.6-inch touchscreen display for air conditioning and comfort functions while instrument cluster is prezented on a 12.3-inch screen (Audi virtual cockpit ). Up to 6 different profiles can be selected.

Audi offers a classic head-up display (1390 euro) with information projected on the windshield. A cheaper head-up display with the same features as those from Audi can be ordered at Mercedes for 1032 euros. The rear seat remote control unit has a high-resolution 5.7-inch OLED touch display 1,920 x 1,080 pixels. It is also used to control convenience and infotainment functions as well as handset for discreet telephony in the rear. 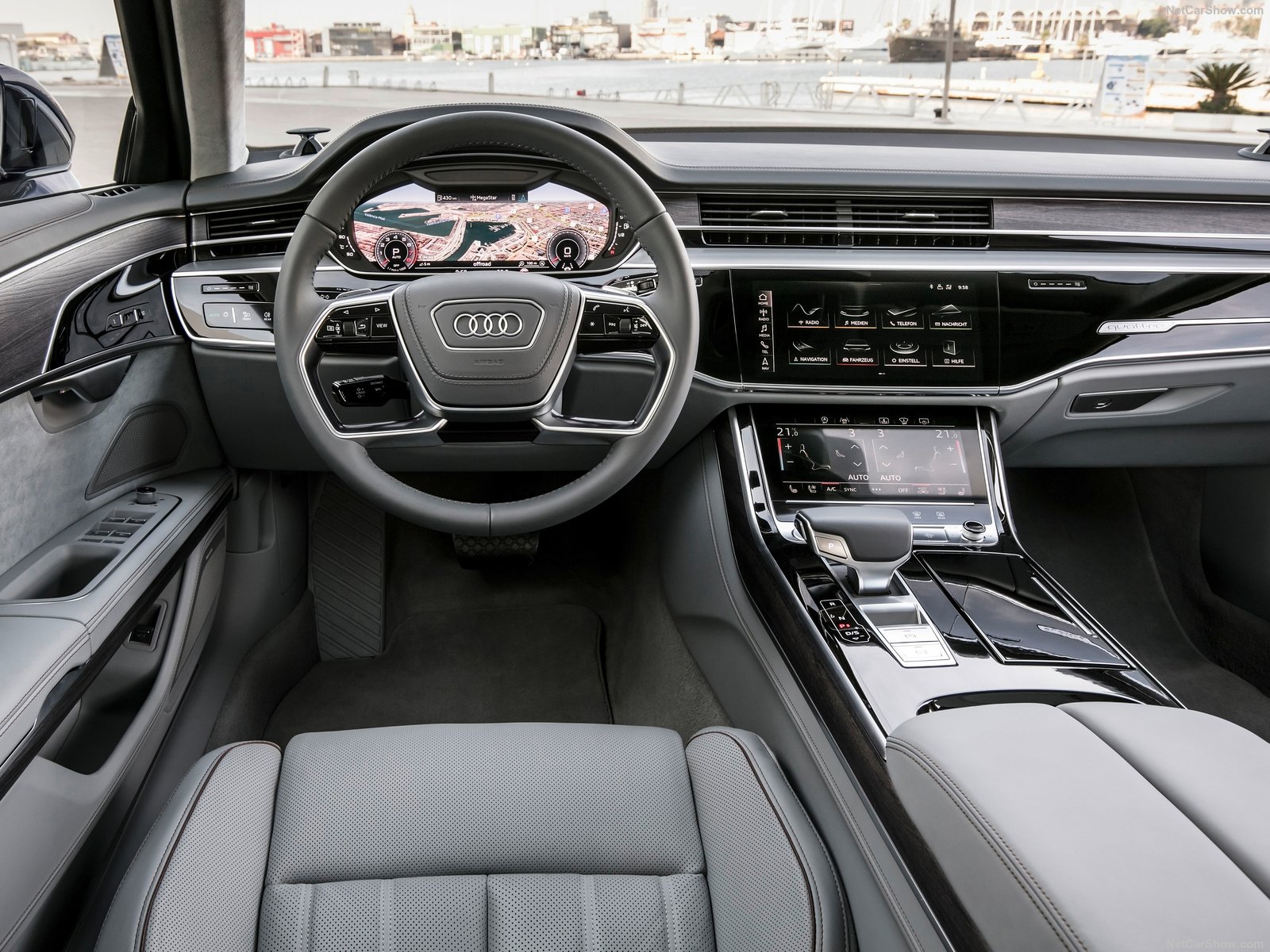 In the penultimate year of its life cycle, the BMW 7 Series attracts customers with better standard equipment. The iDrive system with a configurable 10.25-inch touch screen, digital instrument cluster displayed on the 12.3-inch display and head-up display are standard. The BMW Intelligent Personal Assistant can be activated via Hey BMW command or via the touch function of the iDrive controller.

An entertainment system for the rear seats with 10-inch touch screens mounted in the front seat headrests and the 7-inch BMW Touch Command tablet is available for 3314 euros. 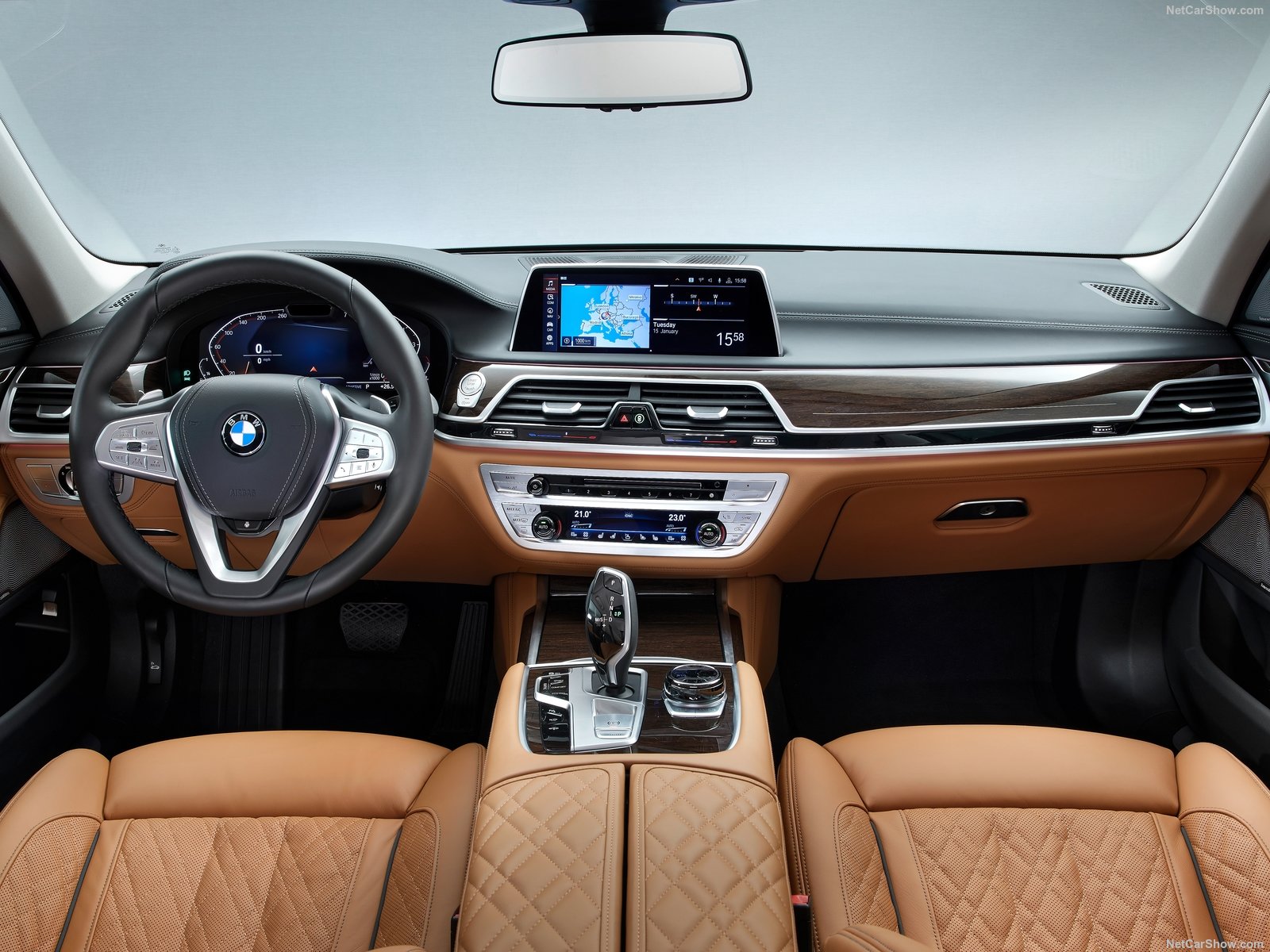 An almost similar assistance package is offered by BMW under the name Driving Assistant Professional (1949 euros) with the mention that it does not include Evasive Steering Assist. The Parking Assistant Plus parking assistance system costs 536 euros, while remote control parking using the BMW smart key and not the mobile phone costs another 487 euros.

Music lovers have at their disposal top HIFI systems. The cheapest HIFI system at Mercedes S-Class W223  is Burmester 3DSurround (1519 euros) and for 7806 euros clients can get a top Burmester system with 31 speakers and 1350 watts.
BMW offers a Harman Kardon surround system for 1364 euros and the most demanding clients have the option for Bowers & Wilkins system with 10 channels, 16 speakers and 1400 watts.
Audi collaborates with Bang & Olufsen and clients can choose between a basic system for 1200 euros or a top one with 23 speakers and 1920 watts for 6336 euros.

All three models are available with long and short wheelbase and all offer plenty of space inside.
Mercedes has the largest wheelbase in both the short and long versions and has the largest trunk of 550 liters compared to 505 for Audi and 515 liters for BMW. 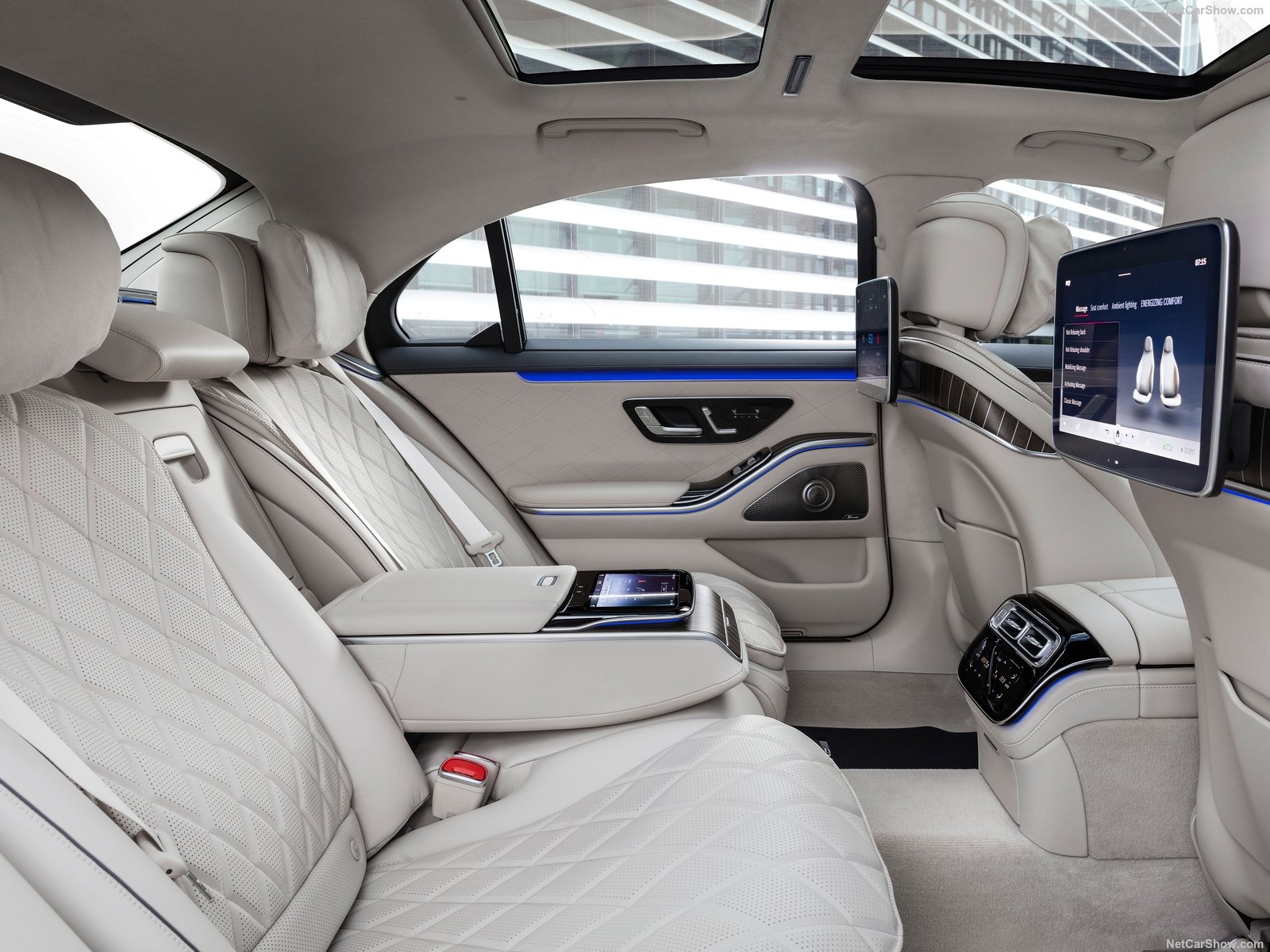 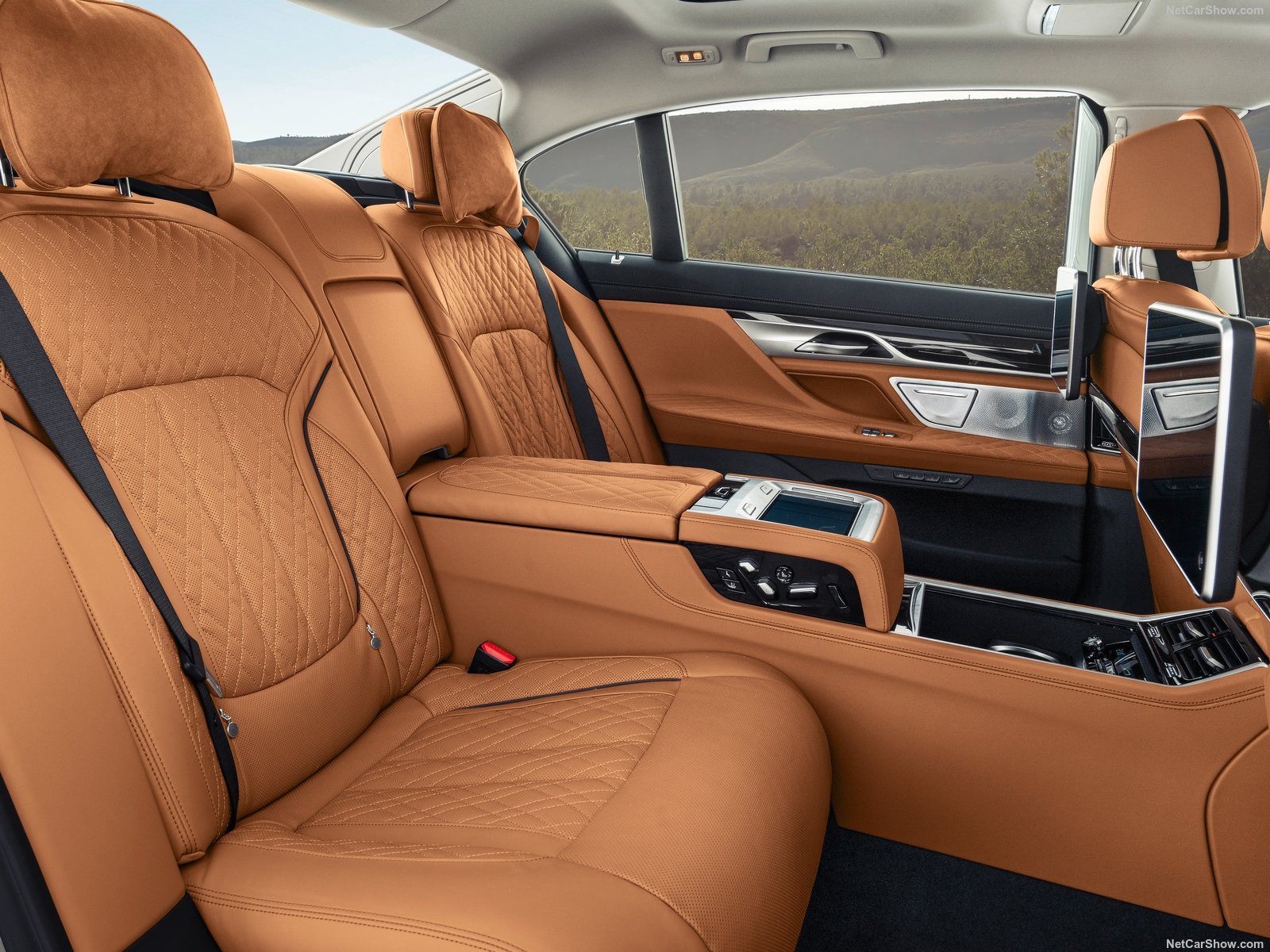 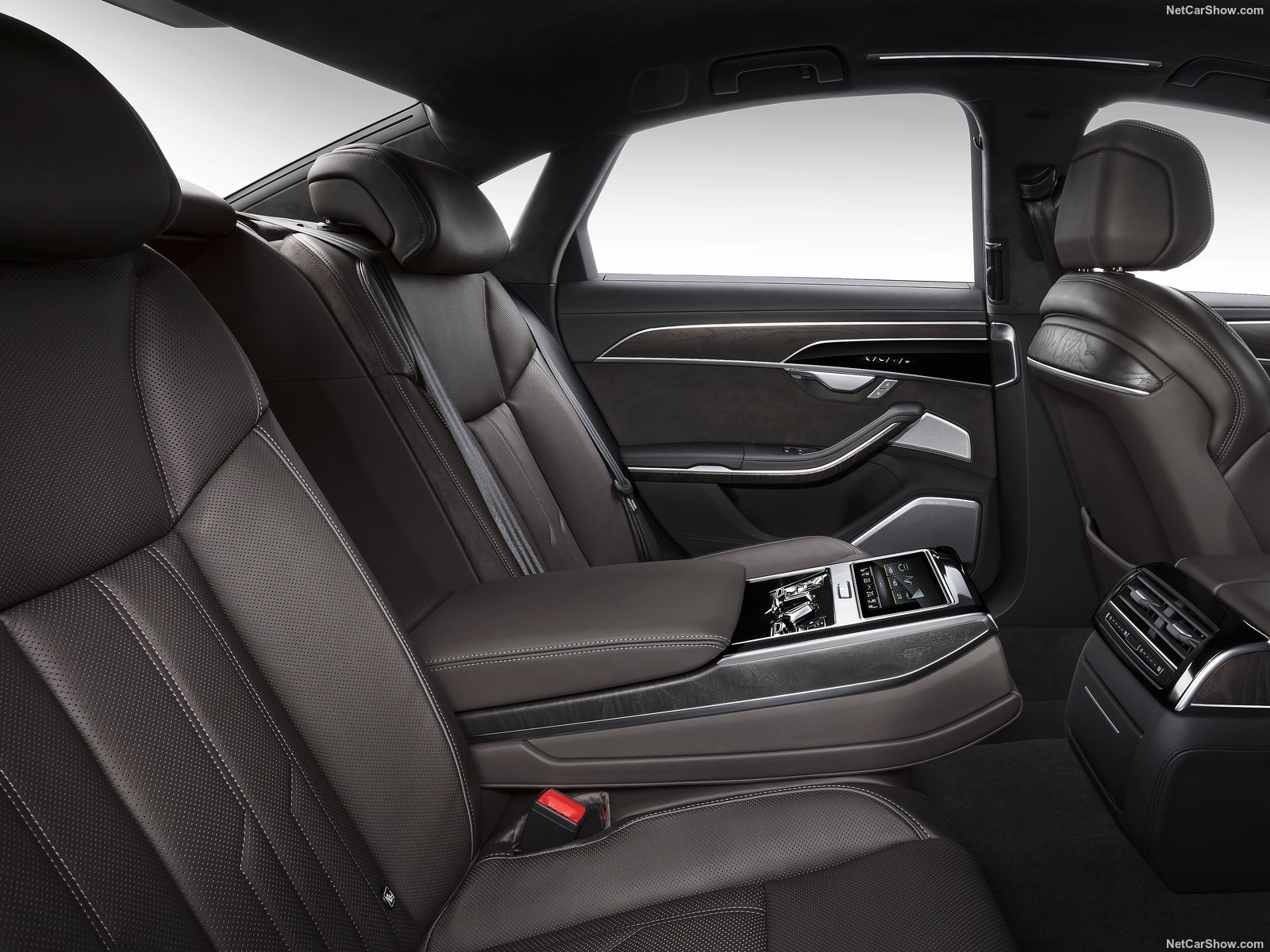