The Mercedes-Benz SLK (or SLC, as it actually be called according to the new nomenclature – to which we’re still trying to get used to) is one of the last models to be updated to the current range identity. Alas, it will be happening shortly and now we have the images to prove it.

The SLK you can buy right now at any Mercedes-Benz dealer has been around us since 2011, so this announced refresh is a bit overdue. These first images don’t show a lot how the car will change, but at least we get to form an idea about what will change.

Unsurprisingly, the modifications will center on the front fascia of the car, with new bumper, radiator grille and, most important of all, new headlights. If you’ve seen the spy photos of the Mercedes-Benz SL facelift we’ve posted earlier, you should pretty much know what to expect since this SLC will be nothing more than a baby SL. As it should be.

There is still some debate regarding the engine the future SLC AMG version will carry. The debate centers around the fact that currently the SLK 55 AMG is only one of the two remaining AMG models to use a naturally aspirated engine, along with the C 63 AMG Coupe. You can bet your entire life earnings that the new SLC AMG will sport a turbocharged engine, though. 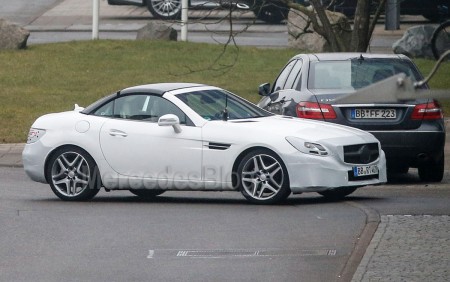 Getting back to what’s on the outside, the photographer was unable to capture the rear of the new car as well, but the fact that there’s camouflage over the taillights is enough to tell us that there will be changes at the other end of the car as well. Expect the lower wind diffuser and exhaust tailpipes to receive some attention from the Mercedes-Benz designers too.

All in all, the 2016 Mercedes-Benz SLK (SLC) facelift has gotten us pretty excited. Small, nimble and fast cars tend to do that to us…