In previous generations, Mercedes impressed with its engines: 6.3 V8 in W109, 6.9 V8 in W116 or 6.0 V12 in W140. This is no longer the case today, but Mercedes is proving that the innovative power of this car does not necessarily lie in the engines.

The former S-Class W222 seemed to have reached perfection in the areas of assistance systems, safety and comfort. But the Mercedes S-Class W223 proves that it can do even more.

The short version increased in length by 5.4 cm, in width by 5.5 cm and the wheelbase increased by 7.1 cm to 5.18 m, 1.95 meters and 3.12 meters, respectively. But 90% of customers choose the long version which is 11 cm longer than the previous generation. It measures 5.29 meters long and has a wheelbase of 3.22 meters. Thus, the footprint of the long version Mercedes S-Class W223 is 10.3 square meters. It seems a lot but not so much for all the innovations it offers. 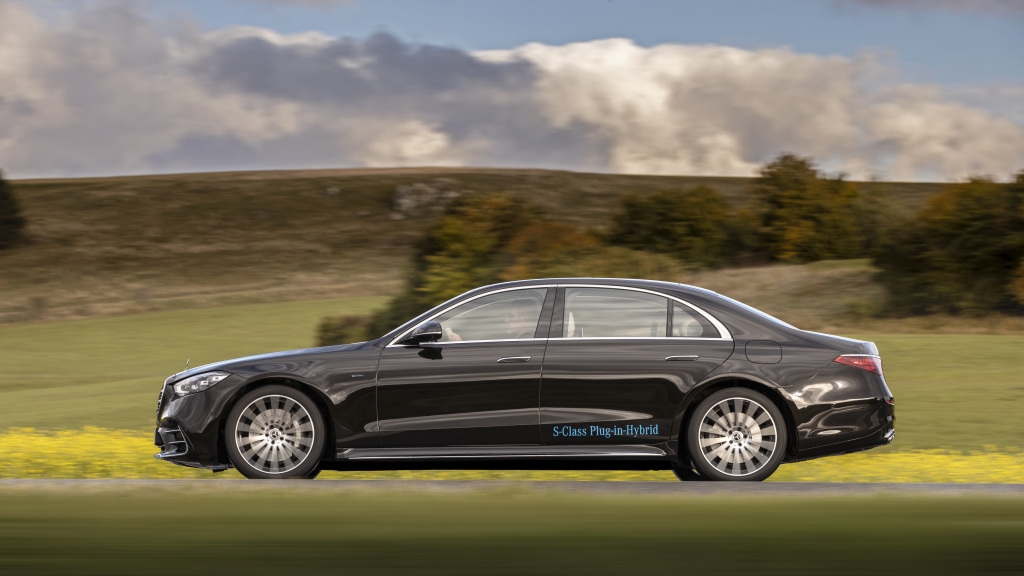 
Multibeam LED headlights that were optional in the previous generation are now standard.

Another innovation is the new augmented reality head-up display (3468 euros) that projects images at a virtual distance of 10 meters on an area that corresponds to a screen with a cross section of 77 inches. The navigation system projects blue arrows on the road that guide the driver extremely precisely.

Then there is the 3D display for the instrument cluster (1148 euros). At the touch of a button the driver can switch the image to 3D. This optional version of the driver display has two integrated cameras. This stereo camera precisely determines the eye position of the user. Due to this camera system, the annoying messages that appear in case you take your hands off the steering wheel, when the adaptive cruise control with the active steering correction is on,  have disappeared. 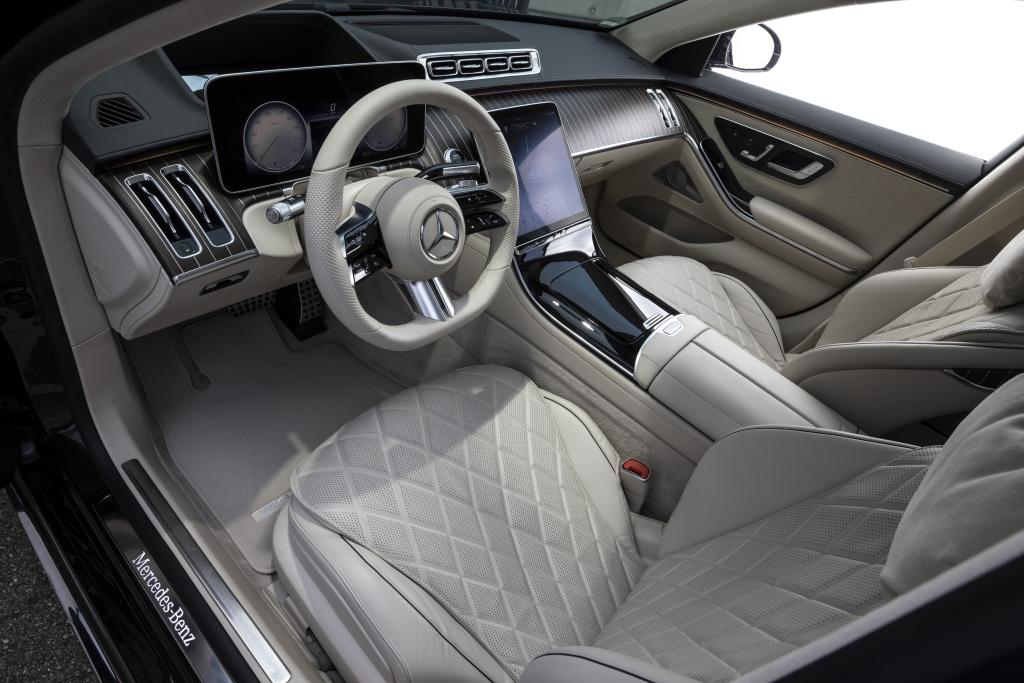 Another option is the 12.8-inch OLED display system (standard 11.9 inches) whose content can be transferred to the rear passenger displays (11.6 inches, optional).
From the screen of the multimedia system you can adjust a lot of functions from air conditioning to massage in seats and of course the whole MBUX system. The voice control works in 27 languages ​​and any passenger can use it.

The seats are a true work of technology with no less than 19 servomotors for adjustment. Over long distances it varies its position a little to prevent fatigue and numbness (energizing seat kinetics). Of course they have functions for heating, ventilation (5 fan motors) and massage (10 massage programs, 4 vibration motors for massage).

In the rear is offered standard three-seater bench or optional individual executive seats. They have, like the 2002 Renault Megane, an airbag in the seat called the anti-submarine airbag, which inflates in the event of an impact, preventing the passenger from slipping under the seat belt.
And because we spoke about airbags let’s count: driver’s knee airbag, front airbags, front and rear side airbags, window airbags, two airbags in the rear seat belts and three new ones: the central airbag between the front seats that prevents the front passenger to collide with the driver  and two rear airbags in the back of the front seats. Basically, you have up to 14 airbags, which means the S-Class is like an inflatable castle. 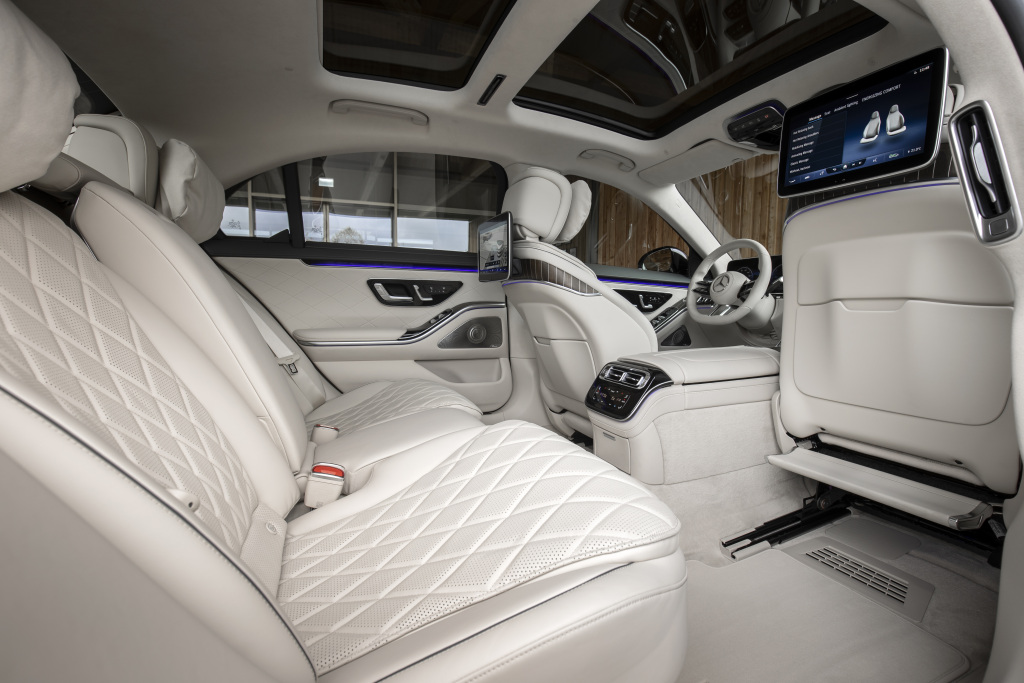 From next autumn, Drive Pilot option that was present on the test drive car will be available. The S-Class can travel on highways in a fully autonomous mode up to a speed of 60 km/h. Drive Pilot is activated with the buttons on the steering wheel and then follows the car in front. However, the sensors also monitor vehicles moving forward and backward. Mercedes uses extremely accurate maps as well as GPS, including error correction, so that the S-Class can be positioned exactly to the centimeter. 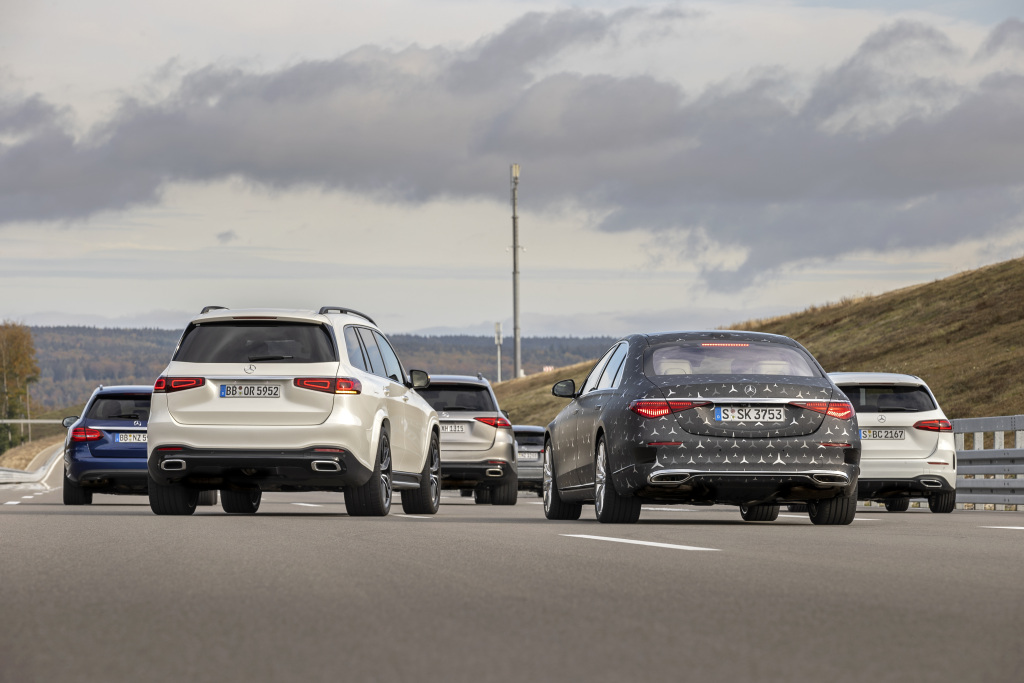 Returning to the steering wheel, we have to mention the new integral steering that at speeds up to 60 km/h orients the rear wheels in the opposite direction by 4.5 or 10 degrees. Both systems are optional but if you are going to install snow chains then you only have to opt for the 4.5 degree system. The all-wheel drive reduces the steering diameter by up to 1.9 meters and so you can park as easily as behind the wheel of a compact SUV and in the city it is as easy to drive as A-Class.

Also, the steering is 15% shorter and is precise, supple and offers good feedback. Even in Sport and Sport + S-Class modes it does not give up a certain level of caution. But it is remarkable how agile it is in corners and what good grip it offers.

But long and fast journeys are still S-Class’s greatest competence. With a Cx of only 0.22 (in the version with the door handles hidden in the body) the interior is so well soundproofed that you don’t know if a diesel or petrol engine works under the hood. Then, the standard Airmatic suspension offers remarkable comfort whether we go over short or long bumps. Later will come the revolutionary E-Active Body Control suspension with active and individual adjustment of the shock absorbers as well as in the GLE and with the function Curve (inclination in curves up to 3 degrees). And in case of an imminent accident from the side, the suspension rises by 8 cm so that the impact is in the area of the sills, which is a more resistant area than the doors.

Unlike its rivals, the Mercedes S-Class comes with a standard package of very sophisticated assistance systems that are based on four multi-mode radars, a long-range radar, a stereo camera, 4 cameras that create a 360-degree image and 12 ultrasonic sensors.

Active Distance Assist Distronic can now prevent an impact with  other road users at speeds of up to 130 km/h ( 60 km/h before), the Active Lane Assist works between 60 and 250 km/h and the correction in the direction up to 210 km/h , Active Brake Assist can intervene at intersections, and Evasive Steering Asssist which assists the driver in driving maneuvers now operates up to 108 km/h (72 km/h before). Also Active Blind Spot Assist has an exit warning function when the car is stationary.

As I said, engines are no longer at the forefront. However, the S 500′s engine is very modern with mild hybrid technology. The 3 liter turbo six cylinders inline  are supported at the start by an integrated starter alternator with 22 HP/250 Nm and an electric compressor. It is a refined, pleasant, fast engine with a decent consumption.
The two diesel engines comply with the new very strict emissions standards with the help of two NOx catalysts and an SCR catalyst. They are not exactly as refined as petrol, but they are a suitable engine.

Who wants to be more eco can choose the new S 580 e PHEV. The 3 liter six cylinders in line with 367 HP work together with a 150 HP electric motor that together achieves a power of 510 HP. Mercedes promises that the S 580 e has an electric range of 100 km and runs electrically at a maximum speed of up to 140 km/h, the energy being supplied by a 28.6 kWh Li-Ion battery. It weighs 241 kg but is more compact which allowed to obtain a more regular shape of the trunk compared to the old generation and can be charged at DC stations with up to 60 kW. Thus, it can be fully charged in less than 30 minutes. 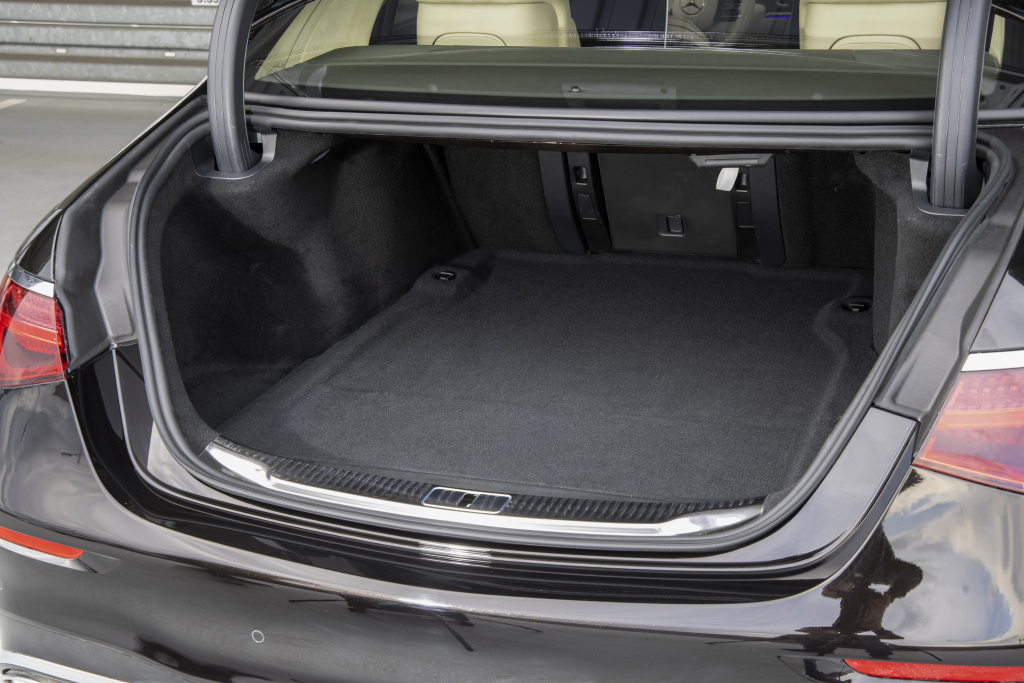 In electric mode, the S 580 e is more relaxed than energic and the powertrain is ideal for the S-Class. Energy recovery levels can be varied from the paddles behind the steering wheel and in the case of the strongest recovery level up to 120 kW can be recuperated. In this case the car can be driven almost in One pedal mode. Alternatively, the electronics control recovery automatically, consider the topography and the route in connection with the navigation for optimal battery use, and also use distance sensors.

If the petrol engine starts – either because the battery has been discharged or you press the accelerator pedal over a certain limit – the S-Class reacts extremely vehemently, highlighting all the 510 HP. And here, S is now what it is in general: in a class of its own.