The facelited GL, named Mercedes GLS, is more than ever a luxury all-terrain saloon thanks to the clever suspension settings, a lot of safety features and four noble engine versions. How is performing the off-road S-Class?

The times of noisy SUVs with separated frame are already history. Doesn’t matter on what type offroad is going, the new Mercedes SUVs focus on top ride comfort. 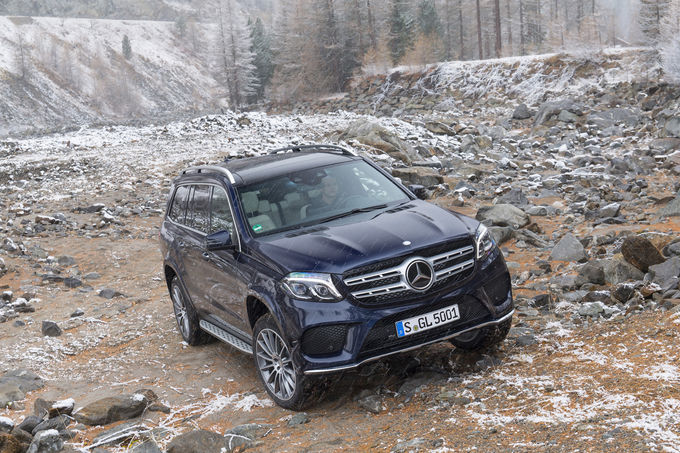 And on top of the Mercedes SUVs we find the new Mercedes GLS with a length of 5.13 meters. The new GLS is based on the GL platform but has been redesigned both visually and technically.

The S from GLS shows that Mercedes GLS is belonging to the S-Class family. The new revised suspension is almost at S-Class level. The Airmatic suspension adjusts itself to the different driving modes. The Comfort mode fits the best with the vehicle character. Only S-Class with Magic Body Control absorbs better the bumps.

Other modes available are Slippery, Offroad and Offroad Plus. In Offroad Plus GLS features low range selector and central locking differential. The maximum ground clearance is 30.6 cm while the maximum wading depth is 60 cm.

But there is also a fifth mode – Sport Mode which modifies the engine and steering response, while the suspension tightens. With this mode, the optional Active Curve System (active stabilized bars) is active but the price of this option is relatively high (3,748.50 euros). With Active Curve System, GLS feel sporty for a such car but is not really a very agile car due to heavy kerbweight (over 2.4 tonnes) and higher ground clearance. 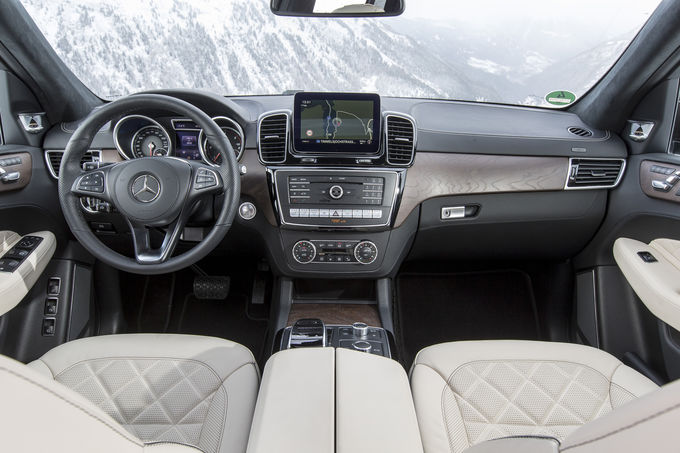 The GLS is also a S-Class if we look to the impressive safety features and assistance systems package.

The latest generation of the Comand system has a new display which is not anymore integrated into the center console.

The interior space is very generous. Even on the third row of seats the passengers have enough space. The boot volume has 680 liters or 2,300 liters if the second and third row of seats are folded. The cargo space length is then 2.12 meters and the maximum payload is 815 kg. So, if you want to take a Harley with you on holiday, you do not even need a trailer.

Three “normal” engines are available – two V6 and a V8 – all of them mated with the new soft 9G-Tronic gearbox, while the GLS 63 AMG features the seven speed automatic gearbox. The 4wheel drive 4Matic system is standard along the range.

The power delivery is very linear, the engine is silent even under full load and is 1.2 second faster than the diesel in acceleration from 0 to 100 km/h. And the price difference is small. The V6 petrol costs 76,665.75 euros.

But the brakes will have a hard job. Even brakes remain fading free, they have a lot of work to do to stop the 2.4 tonnes monster. 455 HP are in a way too much.

But there are always customers who want more and for them there is the option for GLS 63 AMG (135,065 euros) with 585 HP and 760 Nm. If competitors launched cars like Bentley Bentayga or Porsche Cayenne Turbo S, why not an AMG GLS?

Who understand german language can find the full article in auto-motor-und-sport website.