After 4 years, Mercedes is renovating the E-Class range, including the estate, coupe and convertible, and expanding the range of mild engines and Plug-In Hybrids. Here are the main changes and first impressions on the new hybrid versions. We drove, in world premiere, the new Mercedes E 300 e Plug-In Hybrid.

Here are the main changes. Mercedes added a touch of sportiness to the E-Class. The basic model comes with the exterior Avantgarde line. This means that for the first time the entry-level version has the Mercedes star embedded in the front grille supported by a single louvre.

The second version, Exclusive Line, comes with three louvres in the grille and the small star on the hood, as was the case with the former Elegance version. LED headlights are standard, while the Multibeam LED headlights are optional and include high beam with extra long range. 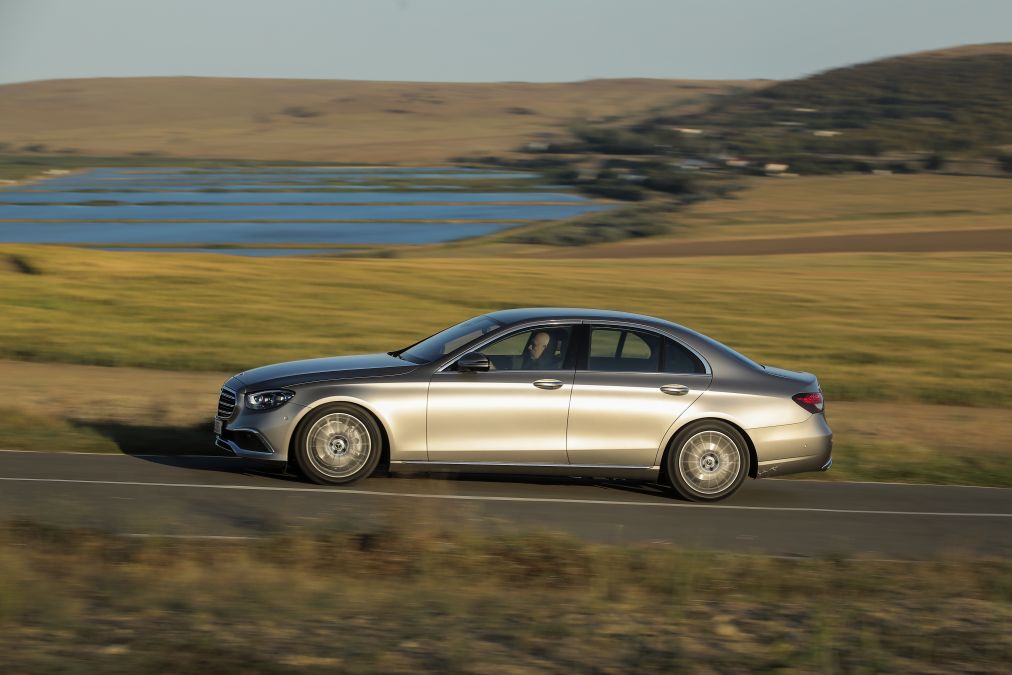 The lower air intake now extends the full width of the car at the Exclusive line, the headlights are sharper inwards towards the radiator grille and the longer and thinner taillights are in two pieces and extend towards the boot lid.

The whole design concept is that the lines are more horizontal than vertical, giving a clearer idea of ​​sportiness just like the smaller models in the range. From the profile and from the rear, the new E-Class looks like an A-Class sedan that has slightly grown. However, enough differences are preserved that personalize the range.

There are several chrome inserts that give a note of elegance, such as the one on the boot lid that connects the two taillights or the one around the grille of the Exclusive line.
And in the rear, the bumper and boot lid have a new design. Three new colors and new aerodynamic rims  are available.

Basically, there are three types of steering wheels: Sport, Luxury and Supersport. The first two have the same ergonomics as the former model with the difference that both the two mini touchpads and the physical controls on the steering wheel have been replaced with a black touch surface with haptic feedback.

Instead of the former mini touchpad, the touch surface has 4 arrows which, by moving the finger up and down and left-right, perform the same functions.

There is a difference in design between Sport and Luxury steering wheel. In the “Luxury” variant the spokes form a cup in a black-panel look, with the sphere floating within it. 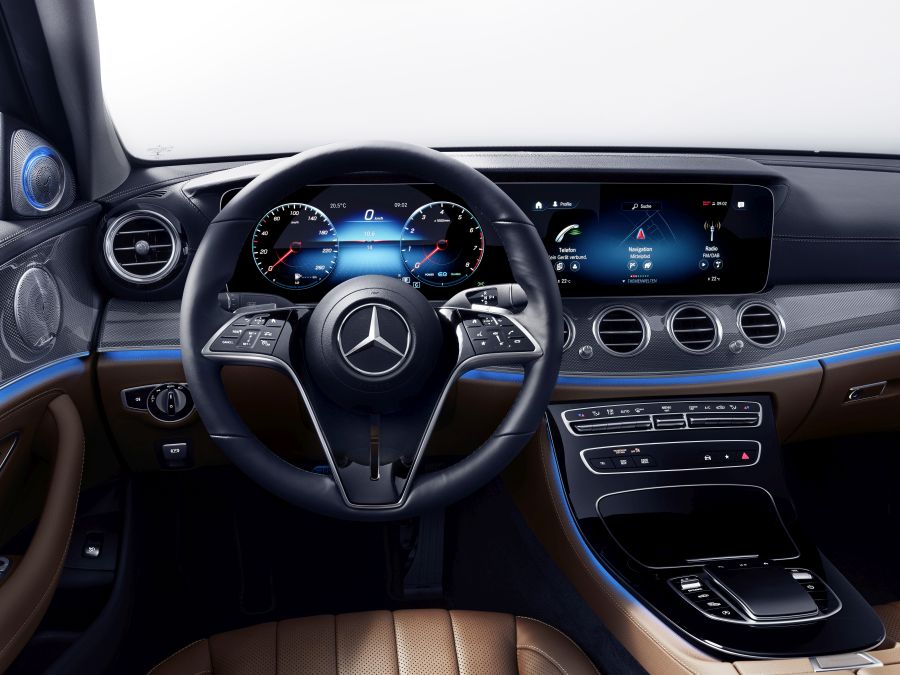 In terms of infotainment, the E-Class comes standard with the MBUX system with two 10.25-inch screens and two interlocking screens of 12.3 inches, each available as an option.

The driver can choose between four display modes – Modern Classic, Sport, Progressive and Discreet. The controller of the infotainment system has been replaced by the touchpad with generous dimensions which, like in the A-Class, is more modern, but not more practical, even if it is more precise than the one from Lexus, for example.

However, the driver has a lot of options to control the system, such as the touch surface on the right arm of the steering wheel, the touch screen of the infotainment system or the voice control. There is also the augmented reality for the navigation system.

The assistance systems have also been updated, Active Brake Assist being standard and braking at city speeds to pedestrian and stationary car detection. Optionally, you can configure Active Speed ​​Limit Assist and Active Distance Assist Distronic, which adjust the speed according to the speed limits. Active Steering Assist and Active Blind Sport Assist are also added, as well as the automatic parking system Active Parking Assist with 360 degree camera.

In the USA, only  petrol versions are available. But in the US, the E 300 is named E 350, it has 255 HP and is not a mild hybrid. Mild hybrid is available for the E 450 4Matic in the same form as in Europe. And the US range will be completed with the new E 300 e Plug-In Hybrid version which we drove in a world premiere.

Mercedes E 300 e, with a much bigger battery

Mercedes has kept the 2-liter turbo petrol engine with 211 hp, but it is now coupled to a more powerful 122 hp electric motor. So the power of the assembly is now 320 hp and the maximum torque reaches 700 Nm, just like of 6-cylinder diesel.

And the battery capacity has more than doubled, now having 13.5 kWh compared to only 6.2 kWh before. During the test, the battery was not charged to verify the electric range, but Mercedes promises 49 km according to the new WLTP cycle. 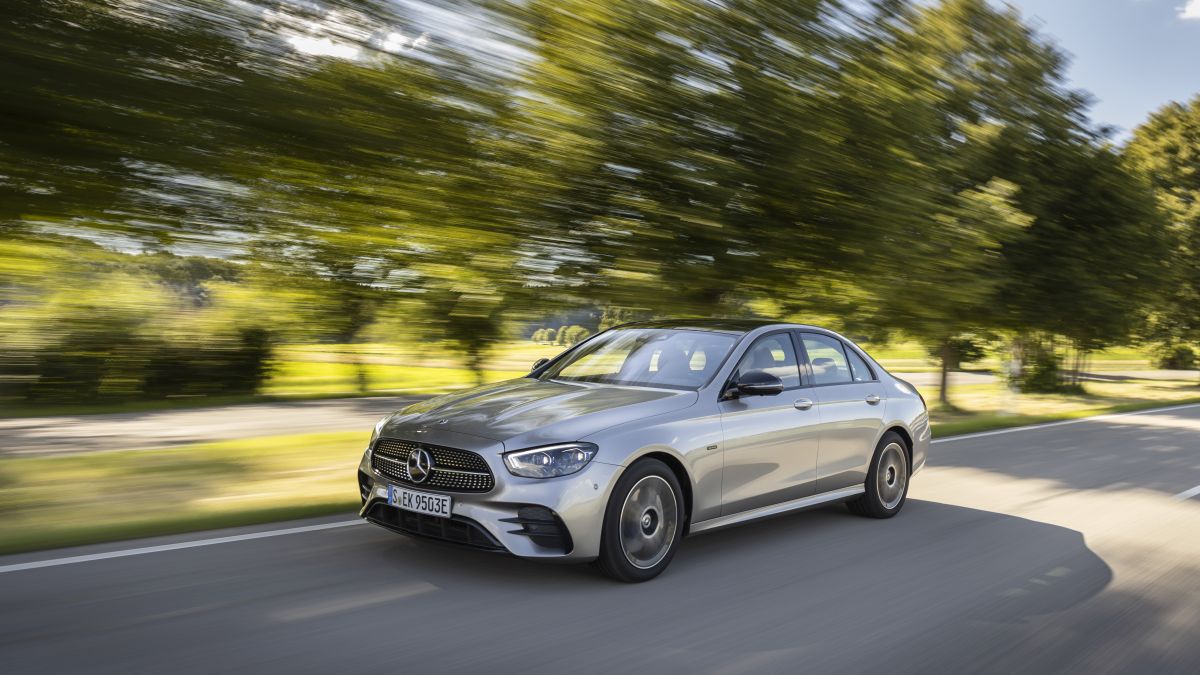 The driver has two additional modes (Electric, Battery Level) besides the already existing ones Eco, Comfort, Sport, Sport + and Individual. Charge mode has disappeared, and the battery can now be charged while driving in Sport and Sport + modes, when energy recovery is much higher.

In Eco and Comfort modes, when you take your foot off the gas, the car enters Coasting mode.

With the air suspension present on the test car, the ride comfort is high class. Due to the enormous torque, the larger weight is not felt on the long road because the E 300 is accelerating vigorously, but in corners there is a slight inertia caused by the distribution of the weight further rearwards because of the battery placed in the trunk.

The Energizing Comfort package that connects the various comfort systems of the car has a special function at the Plug-In Hybrid, called PowerNap. It is ideal when the driver takes a break to charge the battery on the road.

The E 300 e is available in Europe with RWD and AWD, but in the US, only the E 300 e with rear wheel drive will be sold.

Those looking for an AWD version must upgrade to the E 450 4Matic mild hybrid, in which the new M 256 3-liter 6-cylinder in-line engine is mated with an integrated ISG with 22 HP and 250 Nm. 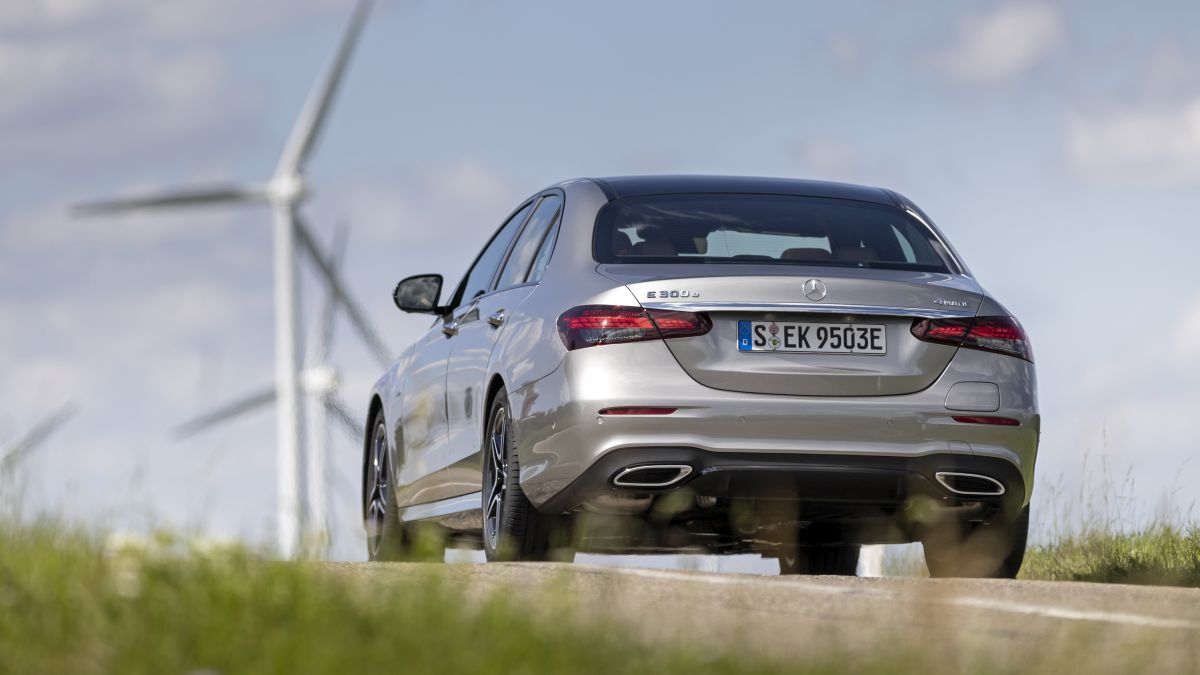 Mercedes E-Class All-Terrain as an alternative to the GLE

After the facelift, the new All Terrain has a design closer to that of an SUV, with a grille with two horizontal perforated louvres that integrates the Mercedes logo in the center and the front and rear shields painted in high-gloss chrome. 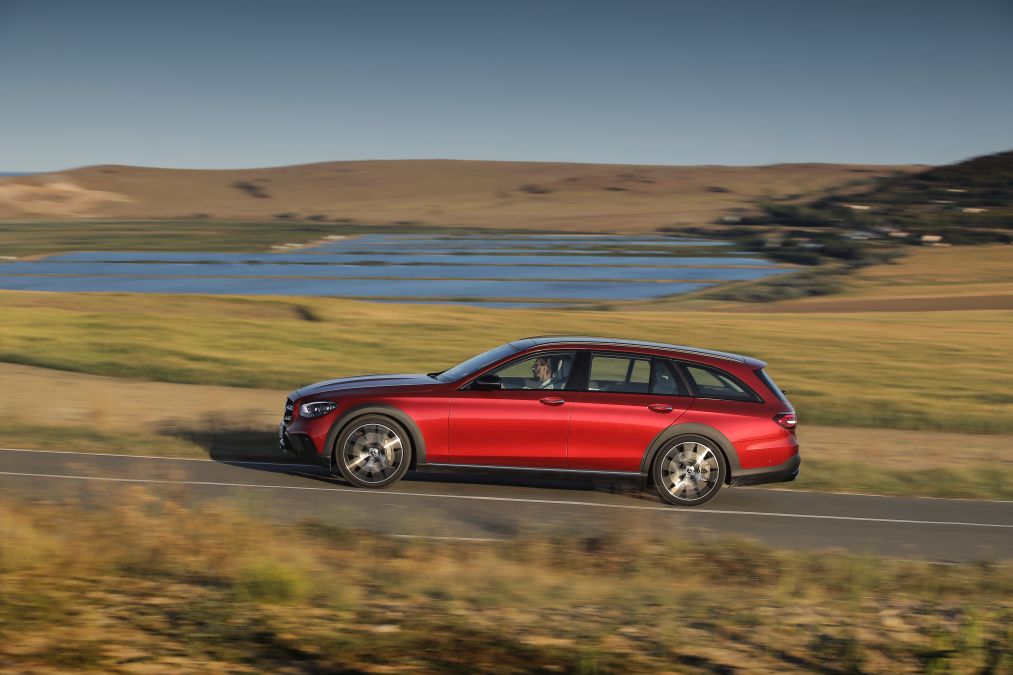 Black side sills and wing protections complete the off-road look. Three types of 19- and 20-inch alloy wheels are available exclusively for this model, with the test version having 20-inch wheels with 245/40 R20 front and 275/30 R 20 rear tires.

Inside, the aluminum-carbon look inserts, the rubber-covered stainless steel sports pedals and the All-Terrain mats stand out.

The air suspension allows the ground clearance to be raised by 35 mm from 124 to 159 mm. Unfortunately, 159 mm is quite a bit for a such car and 200 mm would at least be preferable to attack the rugged terrain without worries.

The 6-cylinder in-line 3-liter turbo engine with mild hybrid technology with integrated generator starter develops 367 hp and 500 Nm and pulls superbly from low revs thanks to the electric compressor that supports the engine until the turbine comes into operation.

The 22 HP and 250 Nm integrated starter generator supports the engine at accelerations and gives it a sprint from 0 to 100 km/h in just 5.4 seconds, a value worthy of a hot hatch.

Exciting drive for the coupe

The coupe is much sharper and agile than the sedan. If the sedan has a somewhat bohemian note oriented towards comfort in the version with the standard suspension, the coupe is tighter, firmer, more exciting. And the compromise between sport and comfort is even better, if you tick the adaptive suspension from the options list (you can even order the air suspension). 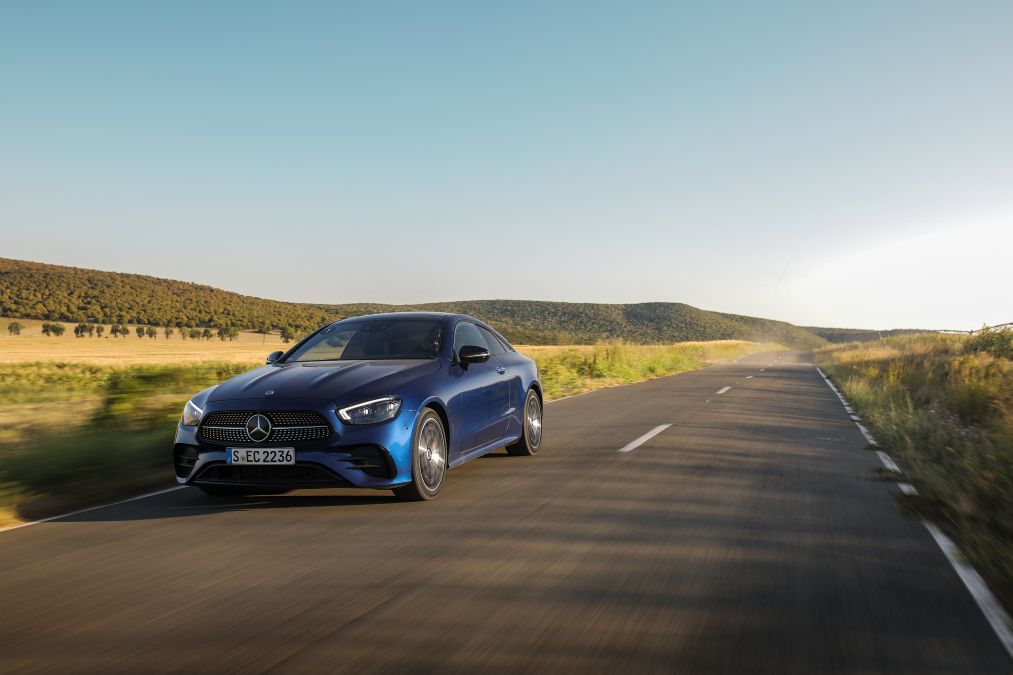 If you didn’t see the logo on the hood, you’d say you’re behind the steering wheel of a BMW. The comfort is Mercedes-like, but the agility is typical for the Bavarian rivals.

We drove the E 400 d 4Matic Coupe version. Purists might say that a diesel does not fit the sporty idea of ​​the coupe, but when you have a noble six-cylinder diesel so refined and so powerful with its torque of 700 Nm, then things change especially that the relationship with the excellent 9-speed automatic transmission is perfect.

The diesel has no sound and does not revs like the 6-cylinder petrol, but the huge torque of 700 Nm is available very quickly and the performance is worthy of a high-performance coupe.

For only about 1,500 euros more you can buy E 450 4Matic version in Europe and in the US, but the consumption will be higher.

Without a central pillar, the four windows of the E-Class Coupe have no frame, which gives it the elegance typical of classic Mercedes coupes. Given that the S-Class Coupe will have no successor, the E-Class Coupe must take over the role of top coupe in the Mercedes range. The interior is as spacious as in the S-Coupe, so more powerful engines can provide it with the role of a top-of-the-range coupe.

The new Mercedes E-Class is more elegant than ever, the standard equipment has improved significantly, the virtual instrument cluster being standard, and the range of engines is the most electrified in the entire premium segment. You can choose between Plug-In hybrid or mild hybrid for both diesel and petrol. Last, but not least, the standard package of support systems is the most complete in the segment.