Exactly 3 years later, Mercedes revises the compact monovolume B-Class, the most successful model of the compact range. First impressions about the B-Class Facelift from Mallorca.

Only seven months after launching the GLA, the fourth member of the compact family, and six months before the confirmed launched of the CLA Shooting Brake at the 2015 Geneva Motorshow, the fifth and last representative of the new compact range, Mercedes revised the B-Class model.

The B-Class is the most successful member of the compact family. In present at second generation, it has been sold in over 1 million units (over 700,000 from the first generation between 2005 and 2011 and over 380,000 in the second generation, between the end of 2011 and 2014). By giving away the sandwich-like structure, the second B-Class generation had the demanding mission to replace both the former B-Class and the former A-Class, that, by using the same sandwich-like structure, was very much indulged by those who had lived over their youth, thanks to the higher driving position. 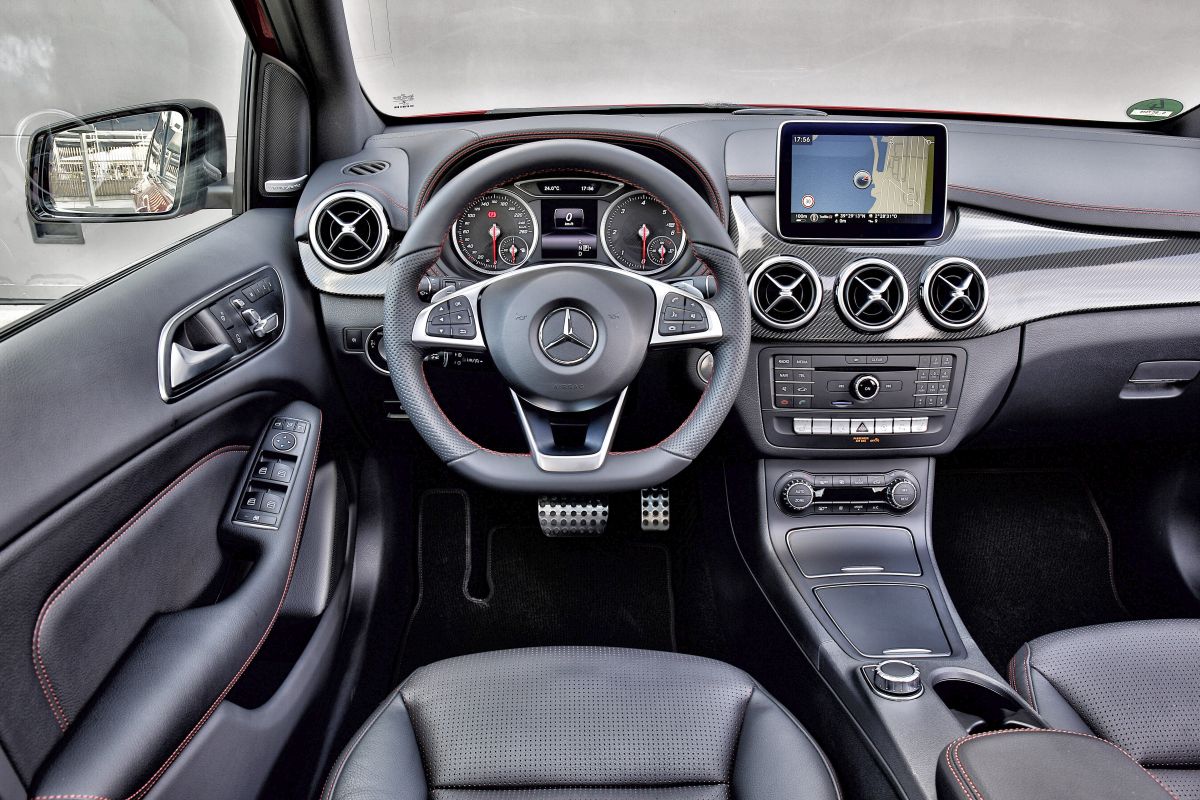 The success of the B-Class can be justified not only from the perspective of its qualities, but also by the fact that Mercedes foresaw this niche in 2005 and the B-Class had no rival for a 9-year time, until the arrival of the 2 Series Active Tourer from BMW this past summer. The B-Class was in the fortunate position as the BMW X6, the X1 or the X3 had been in various time periods.

As most of the facelifts operated by Mercedes (apart from the one billion euros facelift of the E-Class), the changes of the design are unobtrusive. We can notice though the new front bumper, the new radiator grille featuring the two louvres and the built-in daytime running lamps in the headlamps, while at the rear, the only new thing drawing attention is the modified bumper featuring a contoured covering and chrome trim strip. All these design changes have not influenced the the Cd value. With a figure of 0,25, this is the best value in its range. On the inside, the changes are condensed in the new stylish dial layout for the instrument cluster and in the independent free standing display of the multimedia Comand unit, that now has 8 inches instead of the previous 7 inches. Mercedes also offers 12 different colours of ambient lighting.

To all these innovations, the system ”Connect me” is added. In case of an accident, the emergency call system automatically connects the occupants with the Mercedes-Benz Emergency Call Centre and sends the position and condition of the vehicle to the rescue centre (the system is available in 15 European countries and there is one command center in Maastricht, Netherlands). The system works automatically but can also be triggered manually. Conncet me include also an assistance system for maintenance and diagnosis. As an option for extra 150 euros plus VAT (standard if the Comand unit is ordered and for the Electric Drive version), there are a few additional services offered like: identifying the vehicle within a radius of 1,5 km, battery status date in case of B-Class Electric Drive and climate control management.

As for any respectable Mercedes, the assistance systems have been updated. The drowsiness detection system Attention Assist works in a wider range between 60 and 200 km/h and its sensitivity can be adjusted in 5 stages. Also the Collision Prevention Assist Plus system provides semi-autonomous braking if the driver does not brake when he comes close to the front vehicle. Mercedes states that this system reduces by 30% the risk of the rear-end collisions The assistance systems list does not lack the Traffic Signs Assist, nor the Active Parking Assist.

When the B-Class was launched in 2011, Mercedes used to offer some other equipment lines. For the facelift, Mercedes brought the equipment in the B-Class at the same level with other models of the range. Therefore, similar equipment lines to those in the A-Class have showed up: Style Urban, AMG Line have replaced the former Chrom, Sport, Night and Exclusive, to which they added customized programs like Night, Exclusive and AMG Exclusive.

The engine range hasn’t changed much. As a matter of fact, even before the facelift, the B-Class used to layout a wide range comprised of five petrol engines, five diesels and two alternative propulsion models. There are though a few changes, one of which quite surprising.

In 2011, for the launch of the second generation, Mercedes introduced the new 1,8-liter turbodiesel. But gradually, this could not find place under the bonnet of the future compacted derived CLA and GLA. And now Mercedes has completely decommissioned them, as they did not meet more than the Euro 5 standards, and replaced them with the well known 2,1-liter turbodiesel. For the B 200 CDI, the power is the same, 136 HP, but under the bonnet, there is the 2,1-liter turbodiesel instead of the 1,8-liter one. And then, the same 2,1-liter engine in a bi-turbodiesel version in the B 220 CDI now delivers 177 HP instead of the previous 170 HP. 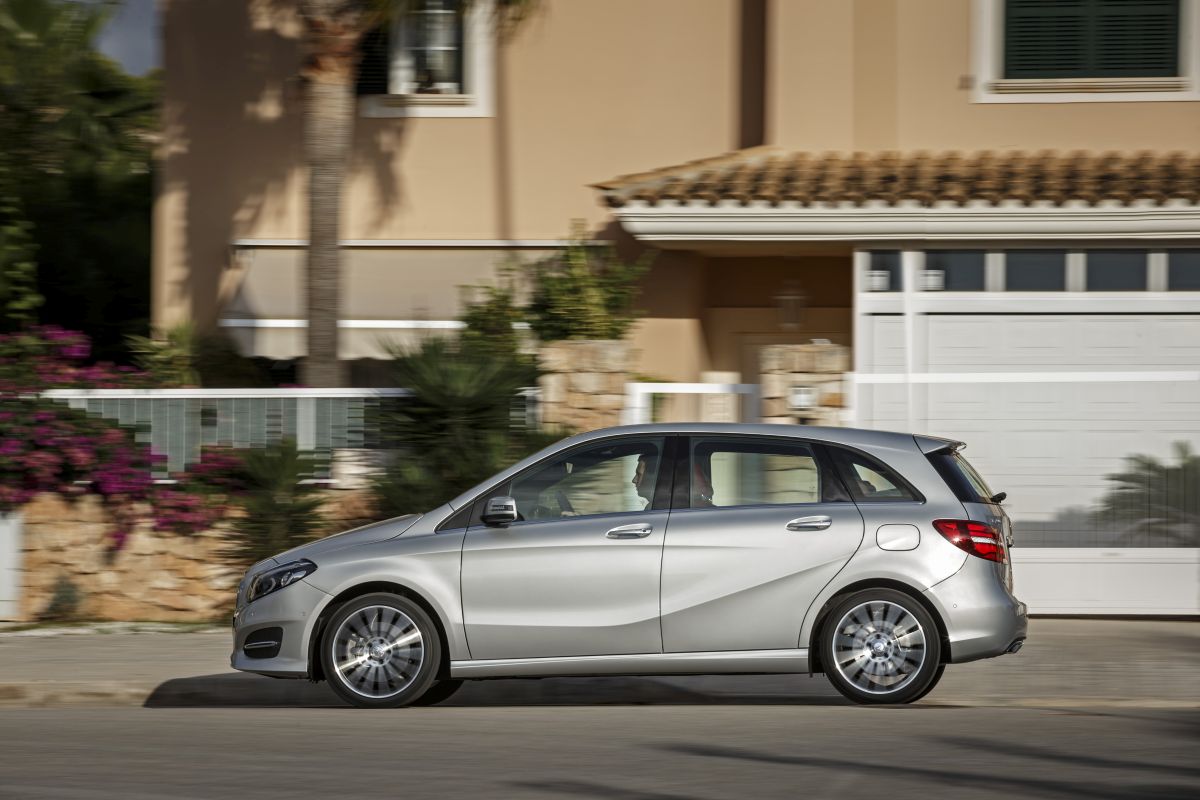 During the drive test, I drove the two new diesels, the B 200 CDI and the B 220 CDI, both with the 4Matic and the B 220 4Matic. The latter one is available only with the 4-wheel drive mated with the 2-liter turbo engine of 184 HP.

The 2,1-liter diesel puts high pressure on the front axle and takes away the agility of the car. The electromechanical steering provides a very good feedback, but the incision is setbacked by the long reduction ratio of steering. There are 3,1 wheel rotations from one end to the other, which affects the agility and the understeering effect is obvious. Instead, the 4Matic 4-wheel drive gives lots of provisions to the limit, but the speed in curves is limited by the understeering and by the long reduction ratio of steering. The Sport button control does not change this feeling, as by pressing it, there is change only in the engine and automatic gearbox response.

The 2,1-liter 177 HP biturbo diesel is refined, highly effective, quiet and does not reveal too much of its diesel origin. But instead, the same 2,1-liter diesel in the 136 HP version is way noisier and in speeding up, it sounds like an out-of-date diesel. Why wouldn’t Mercedes choose to set, in the B 200 CDI, the 1,6-liter 136 HP Nissan origined diesel, also present under the bonnet of the new C-Class, which is much lighter and more refined? 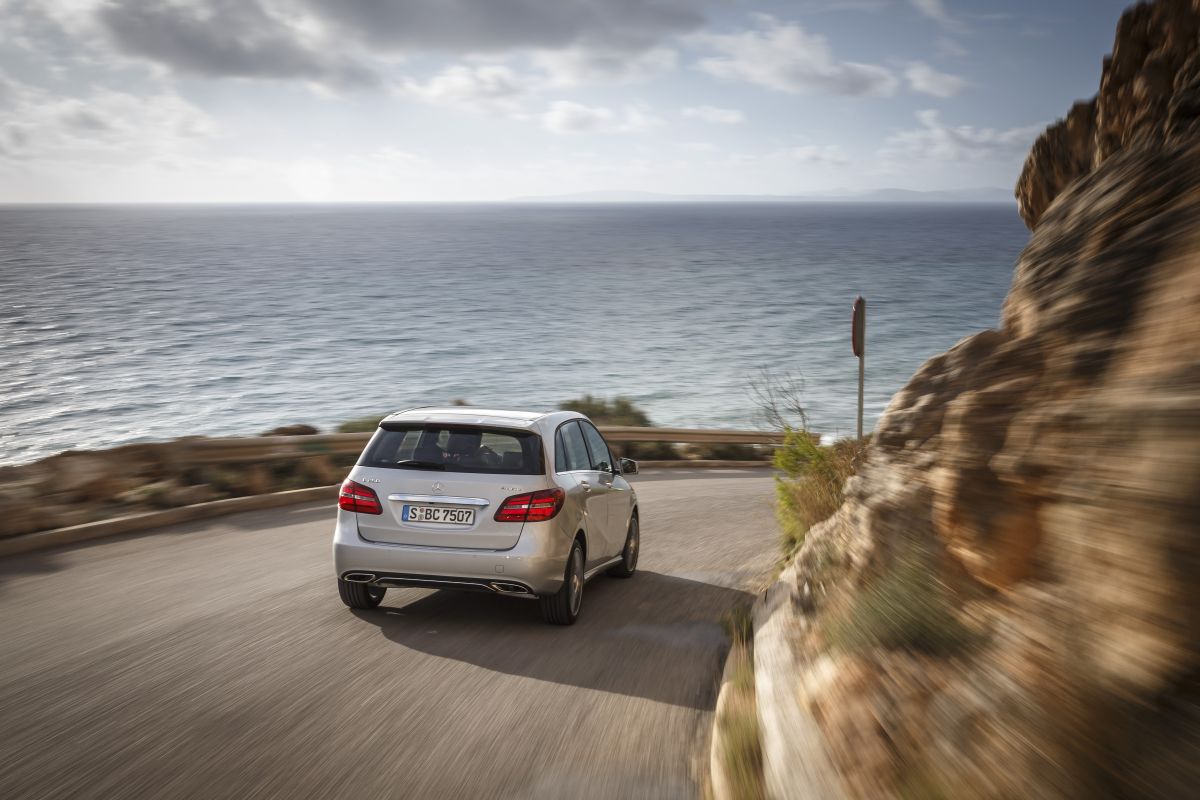 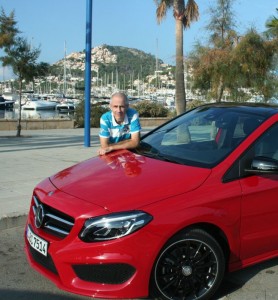 The 2-liter 184 HP 2-liter petrol engine is more pleasant in driving. Derived from the 2-liter 211 HP, that we very much appreciated under the bonnet of the new C-Class and GLA Class, where we found it impressive by performances worthy of a GTI and by refinement, the 184 HP turbo engine pulls well in low revs and is quiet. As it is ligher, it puts less pressure on the front axle and, with this engine, the B 220 4Matic is clearly more agile and easier to handle than its diesel brothers.

On the inside, the B-Class keeps on making quite an impression by the versatility of the interior space, especially if one chooses the Easy Vario Plus package with the sliding rear bench and the possibility of tilting the backrest down to 90 degrees to ultimately boosting the boot volume. The standard 480-liter volume of the boot is comparable with one of a mid-sized limousine.

The new B-Class has been updated regarding the assistance systems and the equipment lines. Regarding the active and passive safety, the B-Class represents quite a referance in its range. By the versatility of the inside space, it meets the highest family demands. The engine range offer satisfies any preference, but the 2,1-liter 136 HP diesel is not the best solution, at least regarding the refinement.