Mercedes chose to set up an engine with Renault roots on its basic diesel versions of the A-Class. Is the A 180 CDI up to the Mercedes demands?

Following the partnership between Renault-Nissan and Daimler, both partners had to gain: Renault will deliver diesel and petrol small displacement engines for Mercedes and Smart, and Mercedes will deliver, among others, the 2,2-liter diesel and the GLA platform for the Infiniti future compact SUV. 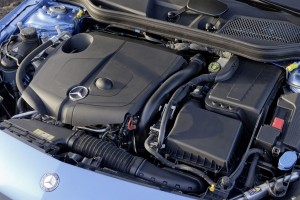 But there are differences even between the most recent version of this Clio and Megane engine and the one set up in the Mercedes. The Mercedes raised the compression ratio from 15,2:1 to 15,5:1 and the start&stop system comes standard. Mercedes A 180 CDI accelerates one second faster than the 1.5 dCi Megane, but the fuel consumption is 0,3 l/100 km extra. The explanation is that the Mercedes shortly sequenced the speed gear to get a better dynamics tune. Mercedes has also insulate the engine compartment better: the cylinder cover is thicker and there is also an extra insulation between the cockpit and the engine.

When it comes to driving, it seems a bit lazier than the 1.6 TDI/105 HP of the Audi A3 and the 2.0 diesel/116 HP of the BMW 116i, while the in-gear acceleration make it comparable with the two rivals.

When it comes to a long distance drive, it is quieter and more user-friendly at 130-140 km/h cruising speed. But the pulling power is not up to the 2,1-liter engine level at high speed and is not quite that quiet as the 2,1-liter at higher load. The version that we tested had a standard suspension and 16-inch alloy wheels. The drive train is rigid, but not as rigid as the sport suspension versions or the AMG package are. Thus, the Mercedes A 180 CDI is more day by day user-friendly, even though the standard suspension has a sports tendency and, just like for the other versions, the rear suspension is rigidly tied to the frame suspension.

Better brakes, sharp steering and a standardly sporty drive train make the A 180 exciting to drive. So is buying a Renault engined Mercedes worth it? It can be a reputation issue for the starred brand, but technically, the combination is successful and the engine is above our expectations. There is though one single problem: the price! Mercedes A 180 CDI, bearing a Renault 109 HP engine, accelerates 2 seconds slowlier from 0 to 100 km/h than the A 200 CDI bearing a 2,1-liter 136 HP Mercedes engine, maximum speed is 20 km/h lower, it has 40 Nm less and is by 1,488 euros cheaper. And the fuel consumption difference is only 0,4 l/100 km.

The engine transplant from the Renault to the Mercedes used to seem impossible. But, technically speaking, the aftermath is successful, as the Mercedes adjusted the engine to their own demands. There could be a reputation issue for the Mercedes, but the impact is minimum. We were expecting a smaller price though.