Mercedes-Benz A-Class has been caught undisguised ahead of its September debut. Updated styling and interior are coming for the refreshed Baby Benz.

The current generation A-Class has been on the market for only three years. Why the rush? Mercedes wants to keep the excellent sales momentum, countering the introduction of the recently refreshed BMW 1-Series and the all-new Audi A3.

The solitary photo published by German website Mercedes-fans.de prove that Daimler has only made minor cosmetic changes to its best-seller. The modifications will largely target the overall shape of the front grille and the headlights, set to receive brand-new full-LED technology. The tail-lights and bumpers will also get fresh looks. 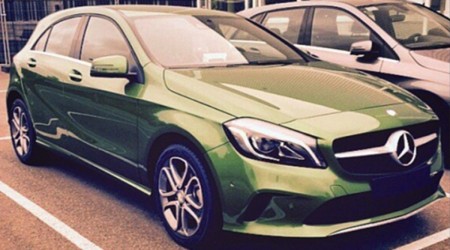 Mercedes is also poised to take its A-Class to the next level in therms of perceived quality. This goal will be evident inside, where Mercedes is likely to introduce a bigger 8-inch tablet-style display, new decor and trim choices. Keyless entry and start will become standard across the range.

The engine range will likely remain mostly unchanged. The main news concerns the light upgrade made to the 2.1-litre diesel whose power output will rise from today’s 170 HP rating to 177 HP.

The model designation will also be different. In line with Mercedes’ brand-new naming strategy, diesel engines now labeled as “CDI”, will be set apart by the letter “d”, placed at the end of the model name. As a result, the top-spec model will become the A 220 d 4Matic instead of the A220 CDI 4Matic and so on.

Mercedes-Benz A 45 AMG also gets new design and power boost. Total power should eclipse today’s record-setting rating of 360 HP and reach 380 HP with the 2.0-litre capacity said to remain untouched.

The revised Mercedes-Benz A-Class will make its debut at this September’s Frankfurt Motor Show, with sales expected to start towards the end of 2015.