Mercedes-Maybach E-Class is taking the ultra-luxury segment by storm by bringing the exquisite craftsmanship and amenities exclusive to its S-Class based Maybach limo sibling one class below.

This is truly something completely unheard of. Mercedes is poised to turn its recently introduced Maybach sub-brand into one of the most diverse and, as weird as this sounds, the most accessible super-luxury line-up in the industry.

A Maybach for every Benz fan, then. The surprising success the Mercedes-Maybach S-Class has enjoyed has sparked the imagination of Daimler’s executives who are now planning a Maybach branded variant for each of its large model lines, including the E-Class, the GLS and, though unconfirmed yet, even the GLE.

What have been considered rumors are now proven right by the first batch of spy pictures illustrating the first Mercedes-Maybach E-Class prototype in existence. The extensive camouflage cannot hide the familiar styling cues shared with the upcoming E-Class sedan set to debut early next year. Following the lead of the S-Class Maybach, the E-Class derived uber-limo gets an extended wheelbase and an extra side window cut into the rear pillar. 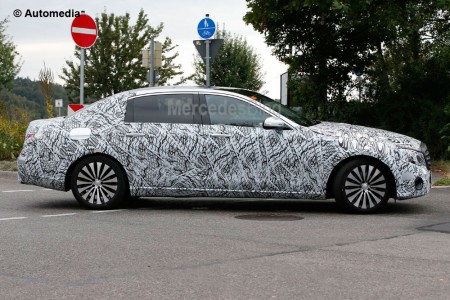 Mimicking the bigger S-Class Maybach and Mercedes decision to limit its line-up to top petrol engines only, it’s safe to assume the upcoming E-Class Maybach will also be offered exclusively alongside the E 500/E 550 trim. The 4-liter twin-turbo of Mercedes-AMG GT fame will be used in its aspirated form to replace the old 4.7-liter of the E500/550. And this is not all, according to latest rumors, Mercedes is also going back to its L6 roots, developing a new twin-turbo 2.9-liter inline-6 engine.

This is not the first time Mercedes has offered an extended wheelbase E-Class, as the current generation has also enjoyed a long variant dedicated to the Chinese market. The styling difference were minimal though. This time around, the future Mercedes-Maybach E-Class will further distance itself from the lesser sibling down the range thanks to an extensive list of unique gadgets and comfort features, Executive seats with massage function and integrated footrests included. 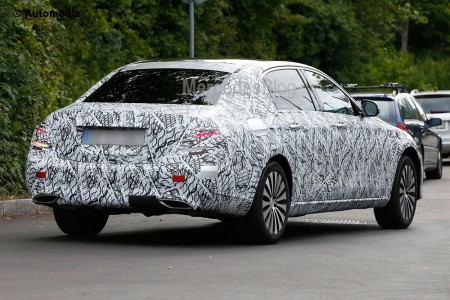 The strategy does makes sense since the S-Class based first offspring of Mercedes’ Maybach sub-brand has become some kind of a silent hit, its sales figures exceeding even the most optimistic official predictions. It all comes down to the affordable pricing scheme adopted by the reinvented super-luxury arm, the premium paid for a Maybach branded S-Class amounting to roughly $23,000, this despite the extra kit the exclusive limo is blessed with.

In E-Class’ case plenty of pricing room remains between itself and the larger S-Class to make slotting a Maybach branded trim in a plausible prospect. With the top non-AMG E-Class starting at $62,350 and the base S-Class setting you back a cool $94,400, there’s still enough breathing room even if we take into consideration the $23,000 premium it takes to turn the S-Class into a Maybach.