Formula 1 scheduled the first pre-season tests at Jerez, and thus we got the chance to see the new cars in action.

Sebastian Vettel, the new Ferrari driver manages to be on top of the timetable on the first day of tests with a time of 1:22:620, a tenth more than Sauber’s Marcus Ericsson. As he was decided to stand out from the crowd with Scuderia, the German manages to set the fastest time of the day on medium tyres, while Ericsson, on the soft compound and running on low fuel, wasn’t exactly threatening the leading position.

But things were totally different at the Mercedes stand. Even though he dominated most of the day, Nico Rosberg didn’t seem too keen on achieving fast laps, but rather on adding more and more kilometers. And he succeeded but in a more aggressive way, delivering 157 laps while driving the W06 car. The distance of almost 700 km was equivalent to two race weekends. The German takes the third place at the end of the day, sending a very clear message, that Mercedes seeks another dominating year. 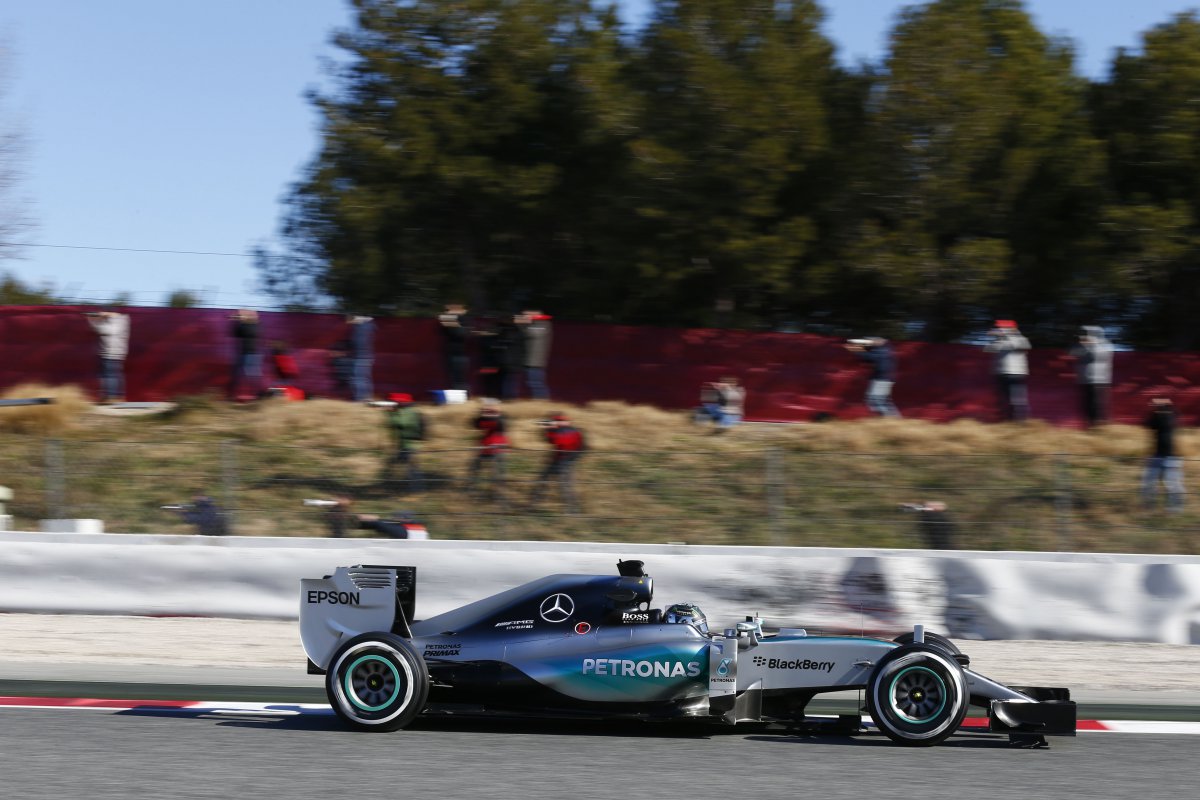 Despite a better start than last year, Daniel Ricciardo completed only 35 laps after the Red Bull was stopped at the pits for engine inspection. After a close analysis, Renault engineers detected a design flaw of a subassembly that will avert the teams with Renault power units from racing at full capacity during the four days of testing.

Valtteri Bottas ended up on fifth place, closely behind Ricciardo, completing 73 laps, despite the fact that Williams was ready to race only at midday. Carlos Sainz Jr., the Torro Rosso novice came sixth in his first day as a Formula 1 driver, managing a good race until he had to face some technical issues.

18 seconds behind Vettel we spot Fernando Alonso, as his return at McLaren will be the day when he completed only six laps. Lotus misses the first test day, due to some delays on the production line for the new car.

Again, Ferrari on the first place

Vettle ends up again on the first place in the second day, proving that the SF15-T can influence Ferrari’s return at the top. The German looked extremely confident after 88 laps, leaving Kimi Raikkonen to do the job in the two remaining days.

As in the first day of test, Sauber takes the second place, but this time with the new-signing driver, Felipe Nasr. In a duel on soft tyres, the Brazillian manages to overtake Valtteri Bottas with almost half second. 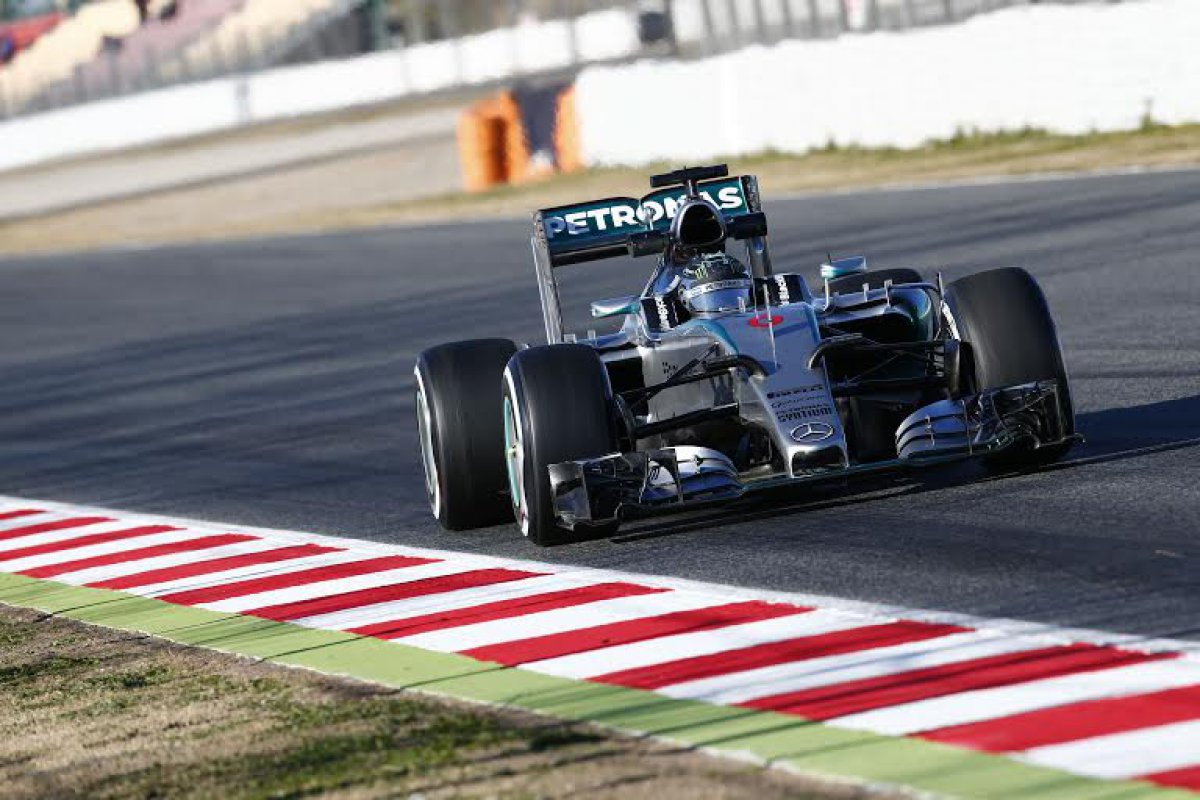 Once again, Mercedes is the team that delivered most laps. Despite the fact that at midday they seemed to get closer to the 157 laps performance, Lewis Hamilton saw himself forced to stop after 91 laps, due to a water leak. With a constant evolution, the world champion sets the fourth time of the day, with 1.5 seconds behind Vettel.

The second newcomer from Torro Rosso, Max Verstappen comes behind Hamilton, on the fifth place with over 3 seconds from the top position. His evolution raised positive reactions, especially due to his driving style on wet conditions. Pastor Maldonado sets Lotus’s debut in pre-season testing, delivering 42 laps, when a drive train issue forced him to end the session early. 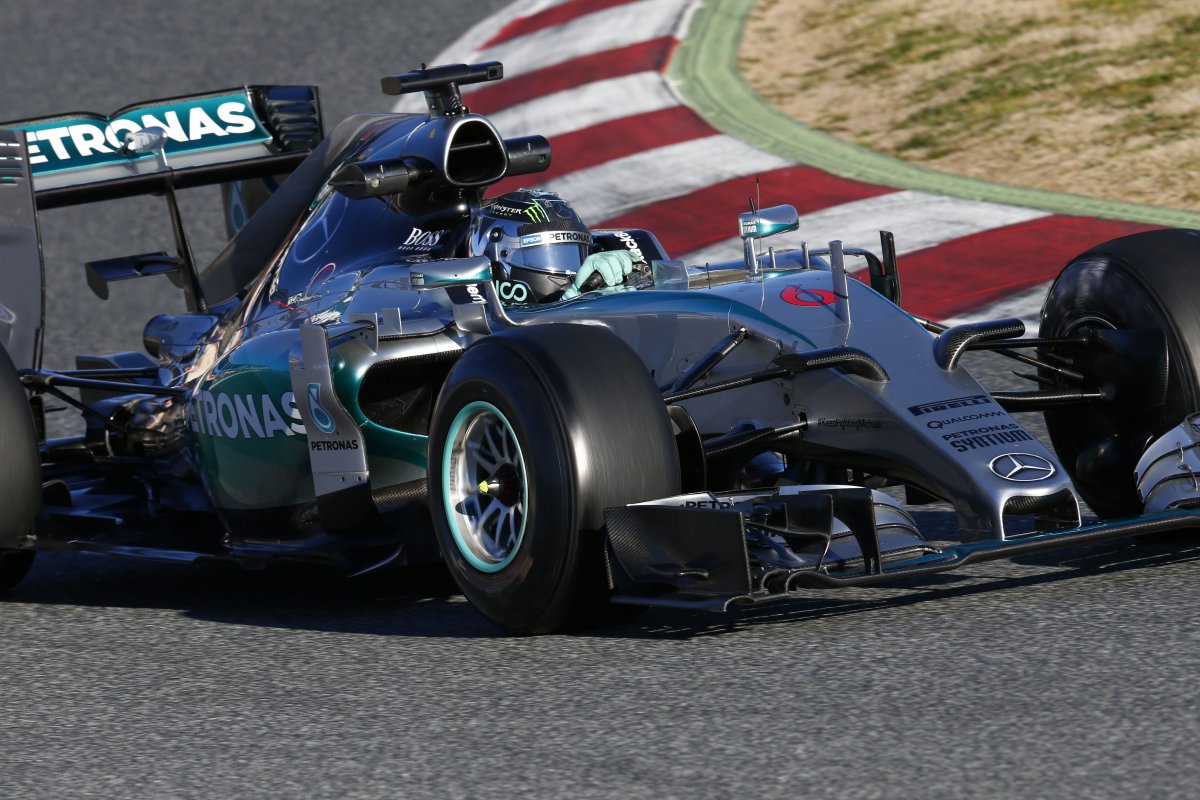 For Red Bull, the session was totally compromised due to Daniil Kvyat’s failure. As he went off the track, the front wing of his car was seriously damaged, this incident forcing the team to test only the power unit, without focusing on the aerodynamic side. Nevertheless, McLaren also had to face a difficult day, as Button managed to deliver only seven laps, 33 seconds slower than the benchmark.

From zero to hero: Felipe Nasr

The strategy of short stints on soft tyres paid off for Sauber in the penultimate day of test. After hopeless attempts in the first two sessions, the Swiss team sets the best time thanks to Felip Nasr, who manages to overtake Raikkonen’s Ferrari.

Mercedes is once again focusing on the longer stints, Nico Rosberg adding no less than 151 laps to his previous 157. Though, Rosberg’s session was cut off for a short time due to some technical issues. After all, the German managed the third time of the day, four tenths behind the leading position. Mercedes proves once again that they possess the best package at the start of the season. Pure performance is there, the car shows its reliability proving that the other constructors have a rather hard time as challengers. 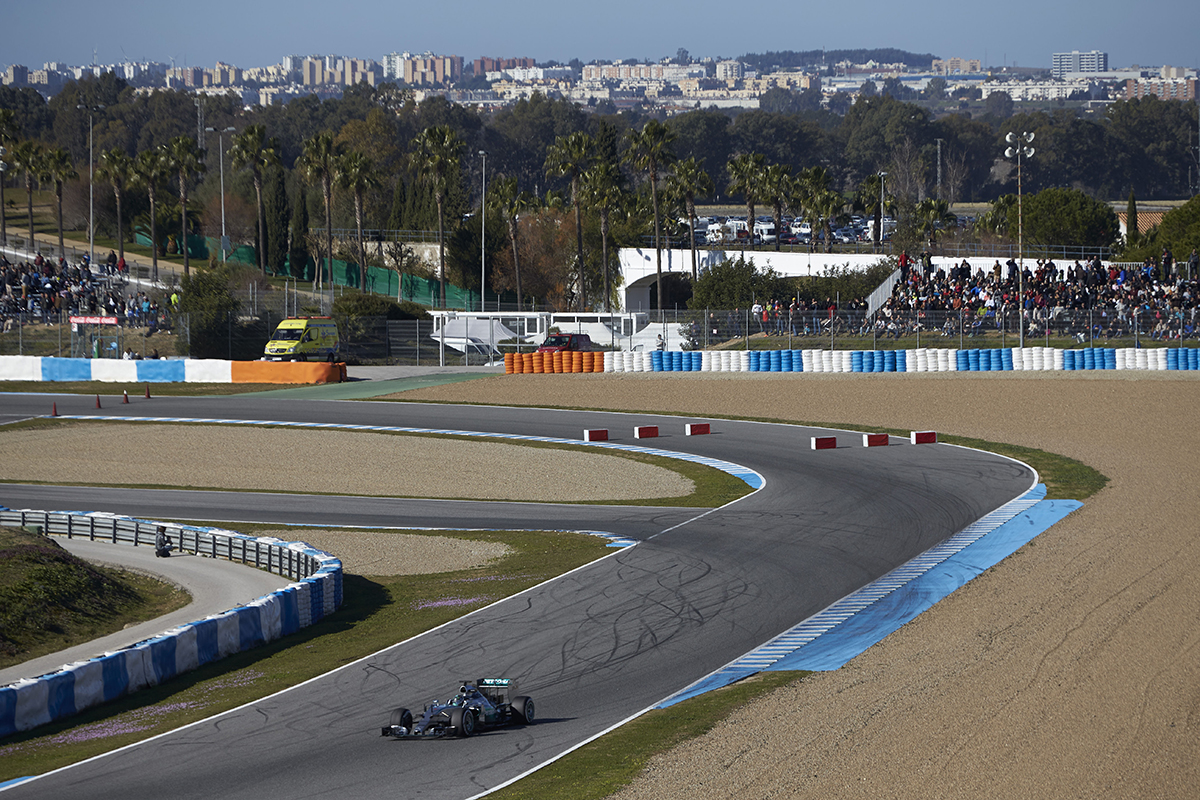 Another pleasant surprise was Pastor Maldonado, as the Venezuelean manages to complete 96 laps while trying to bring Lotus again at the top of the timesheet. His best time was one second slower compared to Nasr, bringing him behind Massa. Even though he didn’t have a constant pace, Sainz Jr compensated through his presence on the race track, as he achieves 137 laps. Red Bull had to face a difficult day, because the team struggled with power unit issues. Ricciardo saw himself forced to log only 49 laps. It was the same situation at McLaren. Alonso completed only 32 laps, before engine problems forced him to call it a day.

Raikkonen, the fastest man of the tests

In the final day of tests, Raikkonen took the leading position, managing to outplay Vettel’s best time with a tenth of a second. The 2007 champion seemed extremely satisfied by the new Ferrari and he starts the new season much more confident than last year. Once again Sauber takes the second place, with more than a second adrift of Raikkonen.

Hamilton completes the podium and goes beyond the 100 laps barrier despite a driving error which forced him to lose 40 minutes at the pit stops. The Brit was followed by Max Verstappen, while Felipe Massa ended up on the fifth place. 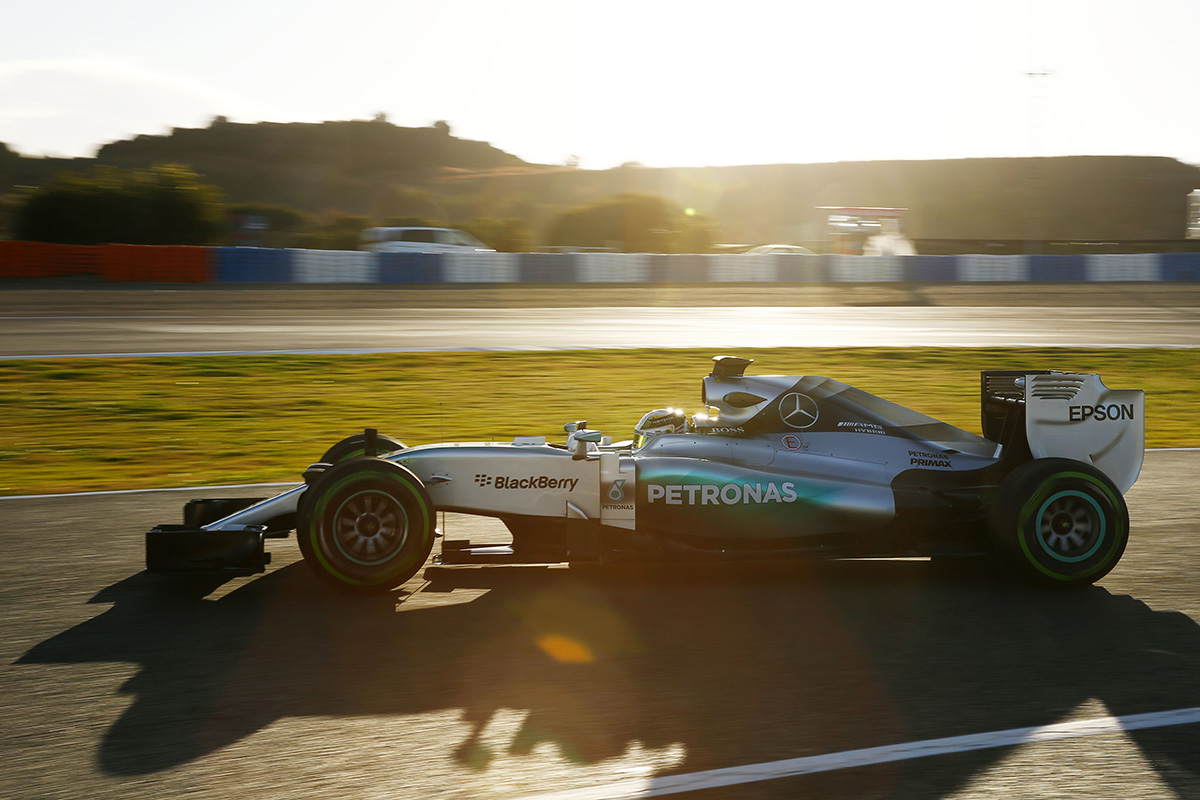 At the bottom of the standings we find teams that were forced to call it quit in the final day of Jerez test. Jenson Button acknowledged his defeat, because he had to face a problem with the oil level that dropped suddenly, proving once again that Honda has a long way to go in its quest of returning to the top of the charts with McLaren. Furthermore, Romain Grosjean was forced to end the day early after completing only 53 laps due to some problems at the fuel pump

The teams took an important step forward in developing the cars of the 1.6 turbo era, as the best time after four days of testing was three seconds better compared to last year’s outcomes. Of course, last year’s conditions were totally different, as all cars had big problems with reliability, a fact confirmed by the number of laps.Last year, in the first day of tests, all the teams managed only 93 laps compared to the 157 completed by Rosberg this year. The news are not so good for those who were sceptical over the engineering revolution that hit Formula 1. Those great minds behind the silent carbon fiber monsters have found their way into the maze and they will sure deliver an outstanding championship.

Even though it’s quite early for forecasts after the first test days, we can still spot a few features of the teams. Even though they never had the best time of the day, Mercedes seems already like a powerful, united team and, most importantly, fully-grown. None of the drivers were seeking the best lap times, but rather, they focused on Achilles’ heel from last year, reliability. For the Ferrari team, the premise of a new beginning starts to take a beautiful shape, but, despite this, they can’t claim the title of Mercedes main rivals. Benefitting from the Fia tokens, the Italians somehow managed to solve last year’s biggest problem, the power unit, which was also confirmed by Sauber. The Swiss are eager to forget the droughty season and they gamble on Nasr and Ericsson, maybe too unexperienced for top 10. Williams didn’t make a splash and their tendency was to focus strictly on the developing program but we will surely see some updates at Barcelona tests.

Sadly, Red Bull, Lotus and McLaren showed no potential at all, so we will have to wait until the next test session for our final apprehension. Until then maybe we’ll pay more attention to Torro Rosso, the new Formula 1 “kindergarten”. With Sainz and Verstappen there, things will get all fired up.