In the same time with the new name, Mercedes SLC has got a facelift and an engine range updated with new entry level and top engines. First driving report with the SLK successor.

The well known german car magazine auto motor und sport has made the first test with the new Mercedes SLC.

Making its debut in 1996, the SLK has made a revolution at Mercedes and not only. The crisp and short two- seater Mercedes roadster had a more affordable price and it was the first series car with a two piece fully automatic retractable hardtop.

After three generations and 20 years of production, Mercedes SLK is a very successful model with 670,000 units sold. The new name can create confusion at the first glance but is not so. In 1970s, SLC name was used for the former four seater coupe derivated from the SL.

Now, the C from the new SLC name want to express that the 4.13 meter long roadster belongs to the C-Class family. The design modifications include the new diamond grille offered as standard equipment (finished in black with an iridium silver louvre and chrome trim at entry level models and in chrome at AMG Line or the Night package) and the new optional LED headlights.

The interior was also dramatically improved with a new sports steering wheel perforated as standard in the grip area, a TFT 4.5 inch display incorporated as standard between the two dials and a new 7 inch display of the Audio 20 standard audio system. Also standard are the new light or dark (optional) aluminium trim parts with a carbon fibre finish. On cars with 9G-Tronic gearbox, the Direct Select lever is embossed with the letters SLC.

Furthermore, the vario-roof with the optional Magic Sky Control panoramic roof can be opened or close also while driving up to a speed of 40 km/h.

In this version, SLC 300 is quite lively and fast, but no so stimulating and involving like a real sports car. In the end it is a true Mercedes, perfect for everyday life and long distances while the Dynamic Select allows to set up five different modes – Eco, Individual, Comfort, Sport and Sport+.

Especially the Sport+ mode sharpens the response ot the engine, transmission, steering and exhaust sound. There is also an option for the Dynamic Handling package which features a 10 mm lower suspension, an adaptive damping system and the Direct Steer system. 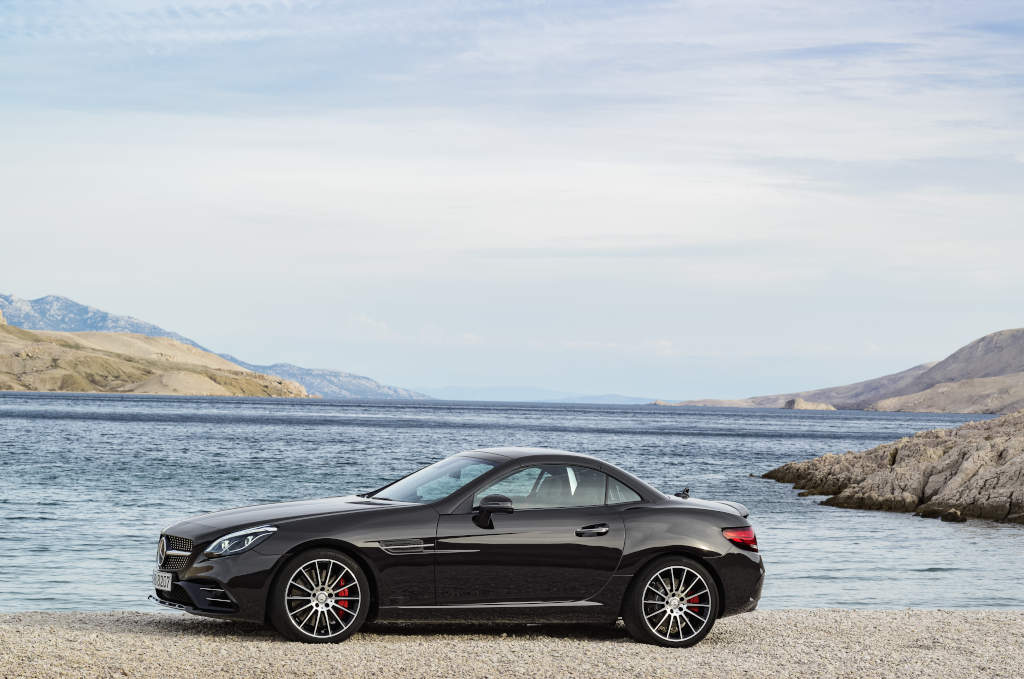 More special is the new AMG version SLC 43 with the three liter turbo and 367 HP which make a nice compromise between a rafinated cruiser and a sports car. On the narrow bends of the French Maritime Alps, the SLC 43 with the lowered sports suspension and Sport+ Mode is very agile and fun to drive.

The needle of the rev counter goes up to 6,000 rpm, the  sound becomes more dramatic and the 255 mm larger rear tyres fight for more traction. The three link front axle has been provided with stiffer sterring knuckles, improved elastokinematics and increased negative camber. In combination with the likewise newly developed wishbone guide bearings, this design results in significantly more agile cornering, with higher lateral acceleration and lower body roll.  Also the optimized AMG 9G-Tronic gearbox plays an important role and gear changes are much faster.

Like the entry level version, the AMG version is also cheaper