Step inside and you can easily mistaken the E for an S-Class: splendidly comfortable seats, acres of leather and high-quality plastiscs, matt wood and shiny metal ornaments. In the highest equipment, before the driver lay two 12.3-inch TFT displays. The left screen can be adjusted in therms of style and presentation, as opposed to the Comand screen on its right. Classical instrument dials with real pointers and a central 8,4 inch center TFT replace the futuristic dual-screen arrangement in basic spec guise – it could well be that this is the last E-Class generation in which real pointers are used to draw on scales.

All functions can be operated via the Comand knob or the touch pad, as well as via the two touch surfaces grafted on the multifunction steering wheel. Intuition is the key: The right wheel-touch surface operate the Comand screen on the right, while the left – well, you’ve guessed it already.

The size of the Navi menu and map were extended to useful and actually self-evident functionality: the user can now display all gas stations within or free parking spots – the system, the corresponding data moves permanently from the Internet. 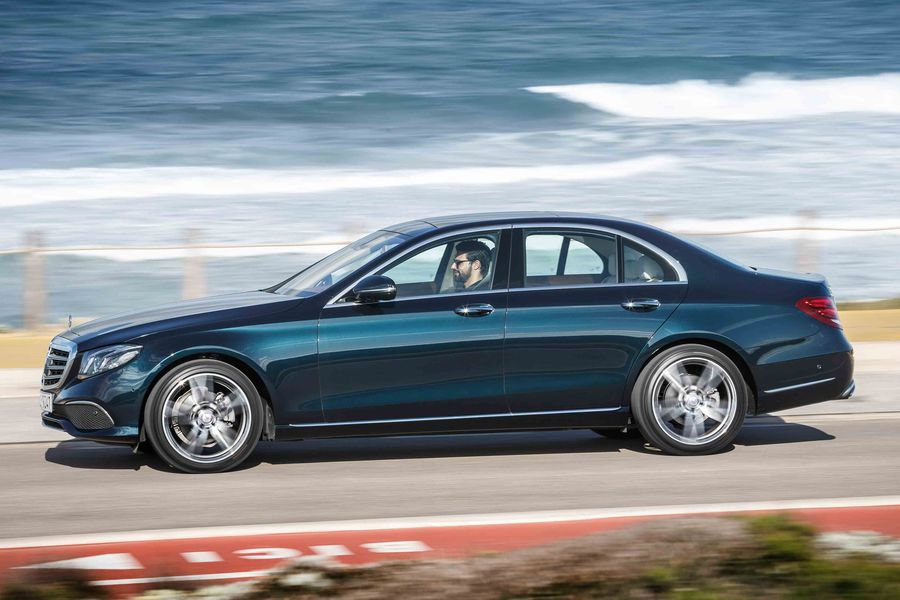 Finally, the drive: The new 2.0-liter four-cylinder diesel rustling softly we draw twice the Distronic lever. The electronics govern the E-Class’ speed depending on the laser sensors and Navi info, constantly adjusting the distance to the vehicle ahead, and also keeping the correct direction. Only now and then the driver must briefly touch the steering wheel, so that the system remains active – because the legislature says so. What do you mean actually go “right”? The distance and speed control is carried out fluidly, the car floating inconspicuously in traffic. Only under difficult conditions the Lane Keeping Assist shows its limits: the road falls into a long left curve followed by a sharp right turn, fierce crosswinds also present – our E-Class keeps the correct track in a little wavy pattern, but eventually gets back in the right line. To change the lane two seconds flashing suffice, the rest is done by the E-Class. The first strange feeling of paternalism softened quickly, as we become accustomed to the new technology.

Of course, we also tried to see what happens if we do not follow the advice to touch the steering wheel again. The system beeps reproachfully and decreases after a while the speed. From 60 km / h down it automatically turns on the hazard warning lights and slowly comes to a halt. 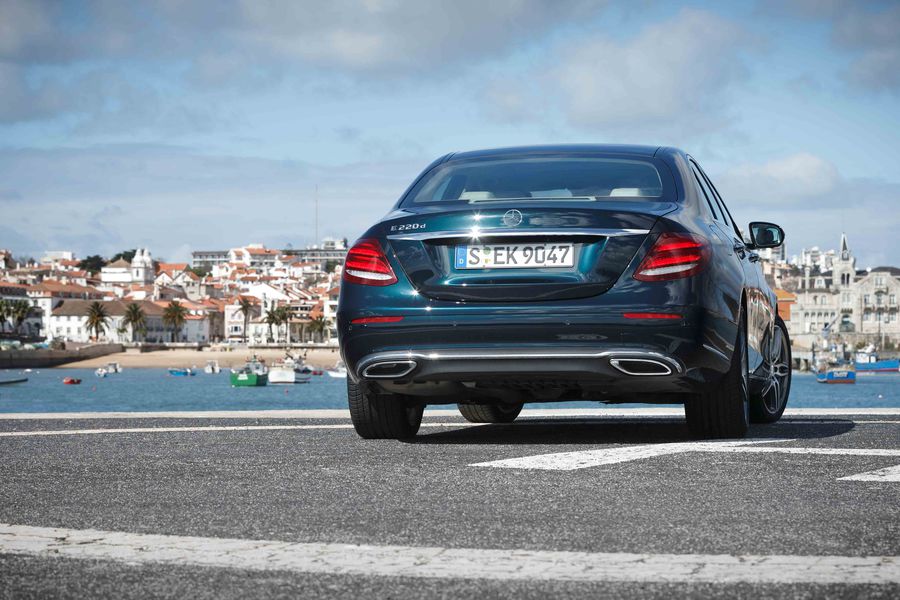 Up to a speed of 130 km / h, the new E-Class can also track other vehicles independently. Once latched by the radar and stereo camera, the car does not even need roadway markings: it follows exactly the direction of the vehicle in front. However, our E 220 d wanted to cut off to the right in one instance – no bad feeling, just be ready to get back into the driver shoes again.

Also new is the steering assistant for accident prevention: if a child suddenly jumps from the side in front of the car, the E-Class not only brakes autonomously, the steering also pulses in the direction in which the driver must steer now.

We turn on the road and shut all “We go now autonomous” systems. After this dose of automatic self-drive it’s time to have fun again. The steering resistance increases over the speed in three steps, Comfort, Sport and Sport + markedly, the suspension is also firmer and the throttle response more directly. In Comfort mode, the steering still has enough feeling left, despite all the softness of precision. In the same mode, the suspension ironed gently across deep potholes, getting only slightly firmer in Sport. 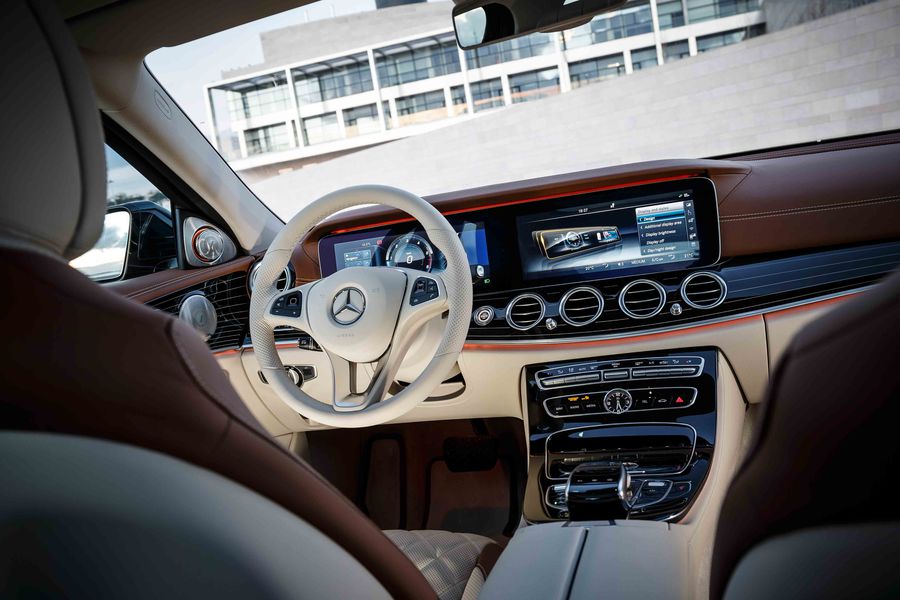 The new diesel is now working with single-stage turbocharging, a sophisticated exhaust gas recirculation system and a directly mounted on the engine exhaust gas purification system. It quietly does its job, even when we plant a firm foot on the gas, the E 220 d kept its calm – not only acoustically. When intermediate sprints on the highway are taken into the account, the engine can shine through a bit of complacency – even if it has itself become lighter by 35 kg, there is still a total of 1.680 kg to cope with. However, the 195 hp and maximum torque of 400 Nm (1600-2800 U / min) provide nevertheless a good reference sprint value of 7.3 seconds, up to a top speed of 240 km / h. The latter is also supported by the sophisticated aerodynamics: A drag coefficient of 0.23 is the best value in the upper middle class. And the sophisticated exhaust gas recirculation and the reduced internal engine friction (thanks to coated cylinder raceways and narrower and smaller bearings) make the E 220 d almost a three-liter car: On the test bench it consumes on average 3.9 liters of diesel per 100 kilometers.

All E-Class variants come now as standard with a nine-speed automatic transmission. This was developed by Mercedes itself and it is also manufactured in-house. The compact gearbox is adapted to any engine size – roughly explained it sets out four successively on a shaft seated planetary gears and the accompanying coupling elements. Who increased discomfort feels the term “planetary gear”, he thereby has to think of the Toyota Prius: this Mercedes system works with genuine switching stages, an annoying continuous operation here is not technically possible. In our test, the nine-speed automatic works imperceptibly like a good butler, always choosing the right gear. Only once on the highway we did not have the feeling of a prompt down-shift operation over several courses. 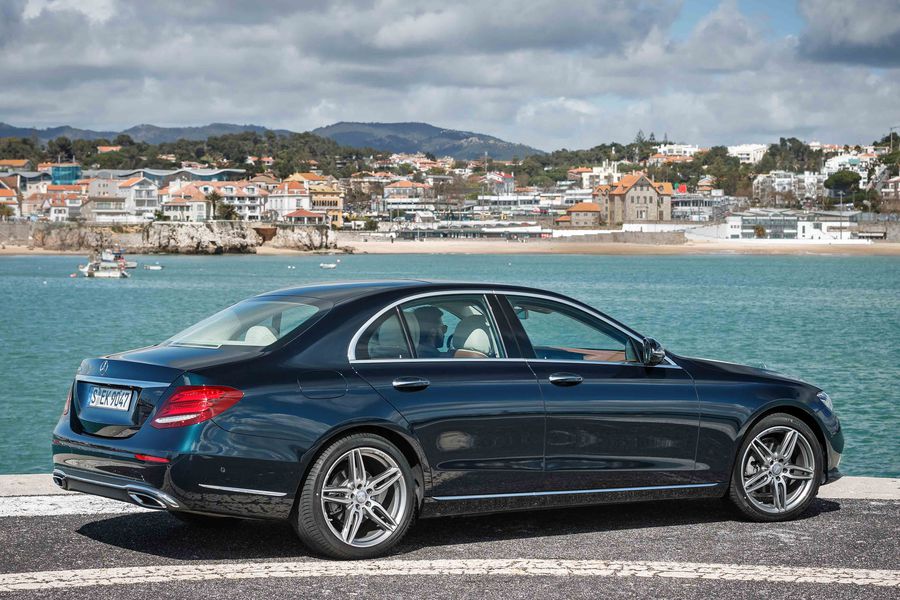 Conclusion
The new E-Class has almost distracted us with its massive step towards a fully autonomous life from trying out the classic old-school driving – hands on the wheel and the right foot planted extensively on the pedals. Hence, this step towards autonomy is also the most impressive thing about the new E-Class. The new E 220 d saves fuel in light of an acceptable dynamic character and relaxing quietness. When it comes to the interior, the new E-Class moves further, closer than ever to the S-Class. As of April 2016, the new E-Class will reach Mercedes showrooms with prices starting for the E 220 d at 46.945 euros (German market).