Cute smart gets a welcome touch of maturity courtesy of the brand’s all-new twinamic dual-clutch transmission. We drive the new smart DCT Turbo in both fortwo and forfour guises to see if they truly reach new heights in therms of refinement.

The clunky, jerky, archaic… call it whatever you want, five-speed automated manual of old and its inherent tendency to send shock waves throughout the entire cabin with each gear change were probably the previous smart’s biggest foible. Thankfully, the Germans have taken note and that unit is finally gone, replaced by what smart calls the DCT or Twinamic. In plain English, this is the company’s first-ever six-speed twin-clutch, in fact, the world’s smallest unit of its kind. It weights only 67 kilograms, taking the smart fortwo’s kerb weight up by a mere 34 kilograms compared to the manual-equipped version.

Offered as an option alongside the standard five-speed manual unit at a 1.275 euros (1.425 euros fourfour) premium, the Getrag engineered transmission hides its Renault roots well. Even if in theory it is based on the same gearbox used by the front-engined/FWD Clio, smart says their version of the DCT has been re-engineered from the ground up in order to fit the requirements of the third generation fortwo and its forfour sibling’s unusual, but intelligently space saving rear-wheel-drive/rear-engine format. 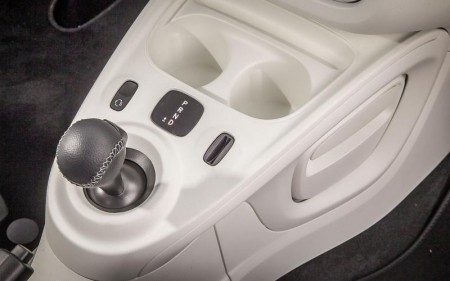 It offers the choice of automatic and manual operation, the latter made possible by pushing the rather hefty gear-lever forwards or vice-versa for navigating between the gearbox’ six-cogs. Conveniently steering-wheel mounted shift paddles are also eager to help, but only as part of the Sports package (adds bigger 16-inch alloys and a 10 mm drop in ride height), none of the test cars on hand had been specified with. In theory, they open the door to sportier shifts, dropping two ratios in quick succession if you double-tap them. As trends dictate, smart also offers two programs, titled Efficiency and Sport.

In auto the DCT/Twinamic shifts with pleasing urge and commitment, without any apparent loss of efficiency or power-delivery, no matter if we’re talking about its up-shift or down-shift behavior. If required, individual gears are skipped all-together for the sake of faster changes. Disengaging and re-engaging duties are dealt with surprisingly smooth, in stark contrast with the ludicrous nodding effect the previous semi-automatic greeted its drivers with on a daily basis. 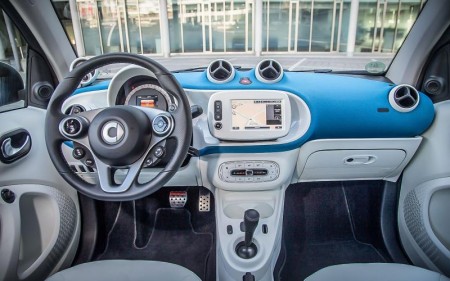 The newly found calmness is not without its weaknesses though. The DCT/Twinamic can still be caught out occasionally, particularly when flooring the throttle immediately after lingering at 10 to 20 km/h in the close proximity of a ‘playful’ traffic light or a roundabout. And we had many of those planted on our smooth German routes. The box simply seems to take its breath for a quick but perceptible moment before deciding to down-shift as it ought to. At low speeds, it’s best to leave it in Efficiency as Sport mode tends to bring this caveat to light more often. On the brighter side, the standard hill-hold function is a welcome addition, making steep inclines a much easier enemy to deal with – ideal in pint-sized-cars loving cities like Rome or Lisbon. The engine is also a peach. Good for 90 PS, the convincing 898 cc turbocharged three-cylinder, direct-injection petrol is clearly the sweet spot of the smart range. Made entirely of aluminum, it hunts for the 6.000 rpm redline with unexpected vigor, accompanied by a lively note, worthy of a miniaturized pocket rocket like the smart itself. In-gear performance is also pleasing for such a tiny, breezing little car, the 135 Nm of torque on offer coming without hesitation at the advertised 2.500rpm all the way up to 5.500 rpm. And it’s all there, provided that you keep chasing for that ideal rev-band deemed to bring the best out of the smart’s tiny engine. In this company at least, the smart is certainly the city king we’re expecting it to be, making town driving a hoot. Consumption figures are also low enough to justify billing it so. The smart returned 4.8-5,5 l/100 km during our cross-Rheinland test. This compares favorably to the 4,1 l/100 km (4,2 l/100 km fourfour) official figures with the standard start/stop system certainly lending a hand in saving fuel. 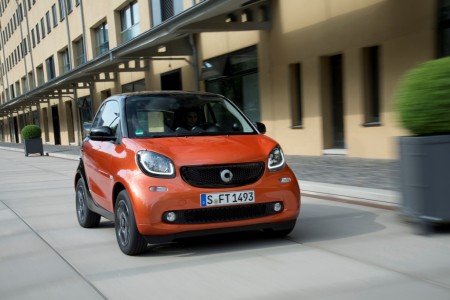 Surprisingly, the 0.9 turbo also unravels more poke than its 11,3 seconds (fourfour 11,9 seconds) 0-100 km/h sprint would let us believe, getting up to the motorway speeds not usually associated with the smart badge in a breeze. In fact, reaching the 155 km/h top speed (forfour 165 km/h) is so swift we almost did not realize it until we ended trailing a puffing Porsche 911, nervously waiting in line on a limitless section of the famous Autobahn. Don’t expect to have that monster’s overtaking ability on hand, though, as the smart is at its best tackled as a patient and gracious instrument and not as an all-guns-blazing marathon runner. And its bohemian steering, precise and well-judged but ultimately still an overtly-light affair, coupled with the slightly bouncy suspension (especially on undulating surfaces, at motorway speeds) and vaguely-weighted break pedal seem to agree with that. 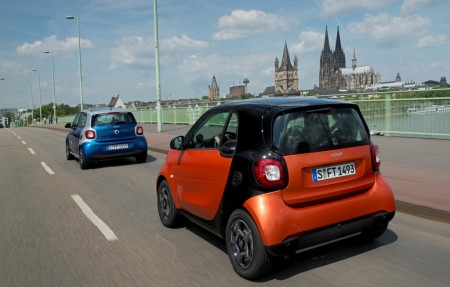 All things said and done, the smart also proves to be reasonable value, setting you back 14.270 euros (German market) matted to the turbocharged engine with DCT/Twinamic automatic transmission. A similarly specified Volkswagen Up will cost you 13,925 euros though with only 75 PS on tap. And in ‘Proxy’ trim, as tested here, the smart can also brag about a long list of standard features like climate control, Bluetooth and USB connectivity, cruise control, lane keeping assistance, heated seats, a panoramic roof and sports suspension as standard. Our verdict is unequivocal. The new DCT/Twinamic dual clutch gearbox finally instills the pleasingly intelligent and agile smart with a whole new dimension in driveline refinement and is definitely well worth consideration. Even more, we’re confident this is no less than the sweet spot of the entire range.