Mercedes has learned from the past mistakes of the first generation Citan. So it continues its partnership with Renault, from whom it takes over the technical basis for the Citan/T-Class, but the interior/exterior design and materials are closer to what we expect from a Mercedes. Is it enough to beat the competition? First drive with Mercedes T 180 d.

Although a premium manufacturer par excellence, Mercedes has always had many practical models in the range. There was once the Vaneo, derived from the first generation A-Class, with a sandwich floor. An excellent family and commuter car, but too expensive because it was derived from a passenger car. Mercedes then tried to make the segment profitable and turned to a partnership with Renault. But the first generation Citan was a failure, because the Swabian brand inherited a weak safety structure from Renault, and to cut costs, the car was almost identical to the Kangoo both inside and out.

Now things have turned out differently. Mercedes has been involved in the car’s development from the start alongside Renault, and the exterior and interior design is quite different from the Renault Kangoo, while retaining the Germans’ imprint. Mercedes did also something else: it decided to offer a more luxurious people version called the T-Class in addition to the Citan Tourer, applying VW’s strategy from the former Caddy generation, which also had the more luxurious Life variant. 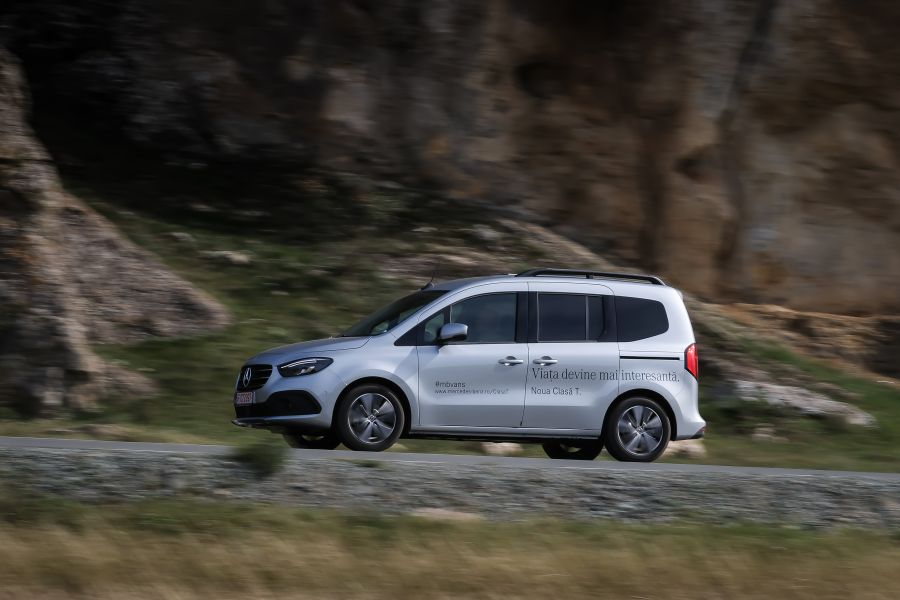 Mercedes is asking 5,000 euros more for the T-Class than the Citan Tourer on the equivalent engine. It is too much or it is a fair positioning?Of course, the more luxurious version hasn’t been transformed from a transport vehicle into a graceful swan, it remains a van at heart. But this van also has the task to replace in the future the refined B-Class, which will have no successor.

Still, despite being a van at heart, the T-Class looks similar to a Mercedes. The front end bears some resemblance to the A-Class and B-Class, and the headlights shine with High-Performance LED lights, standard on the Progressive line. Inside, too, in addition to the round air vents, multimedia system (not quite the latest generation, but Mercedes) and dashboard instrument cluster with the typical Mercedes display between dials, the T-Class catches the eye with glossy black inserts on the interior door handles, the multimedia screen, the round air vents with their specific adjustment, and the dashboard partially clad in a kind of elegant Alcantara that the Germans call Neotex. We expected the rest of the plastic on the dashboard to be soft, but here we only found the sturdy plastic from the other versions. 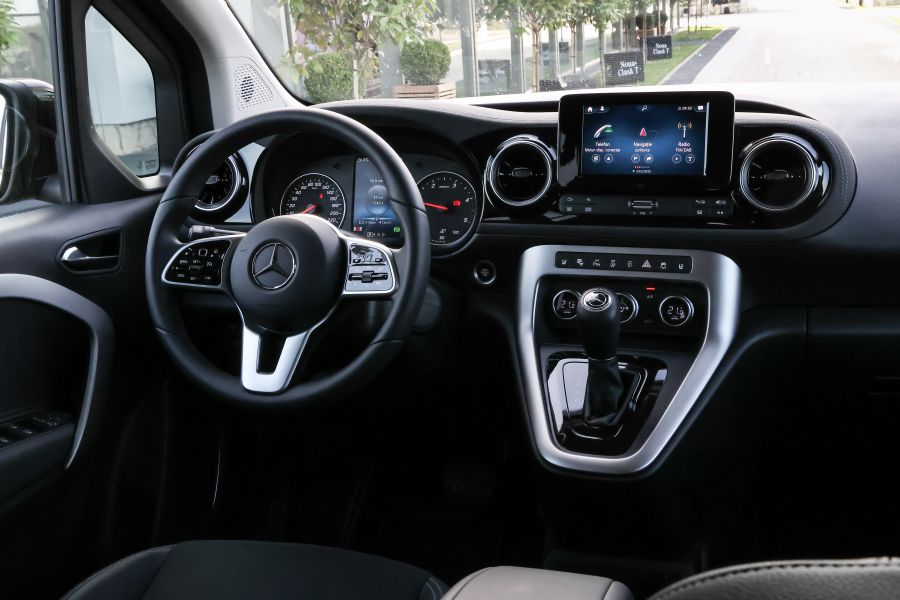 But now comes the attractive part, going on holiday. Here, too, the T-Class has its strengths. Whether you have small children or want to go on an European tour or fishing trip, you can load up the trolley, a large cooler, a camping table, bags of luggage and still have plenty of room, because you can fold down the 40/60% backrest if you need to, and the 520 litres of the boot expands to 2,120.

The cushion of the rear bench ingeniously folds down as you tilt the backrest giving you a flat surface. And if you still need room, you can buy the original crossbars (378.42 euros, longitudinal ones already exist), fit an extra roof rack or attach a trailer, as the T-Class can tow a load of up to 1500 kg. And there are two Isofix holders for child seats on the rear outer seats. It is Mercedes T-Class special? Not really because the same facilities are offered by the Renault Kangoo, too. But Mercedes promises more style.

Better insulation but the 1.5 dCi has not enough power

After the first few miles on the highway, I noticed that Mercedes used more soundproof materials than Renault, which should increase the sense of well-being on board. Well done, Mercedes. However, at over 110-120 km/h, wind noise around the large mirrors starts to increase. But not at all similar to Mercedes standards is the lack of sovereignty of the most powerful diesel on offer. In town it’s sufficient, but on the motorway it has a lot of work to do and for decent dynamics you need some time and patience, as the 0-100 km/h acceleration needs 13.2 seconds. On the other hand, the WLTP consumption of 5.5 l/100 km is economical. But you can only achieve it on national roads at speeds of 90-100 km/h. On the motorway at speeds of 120-130 km/h, the large frontal area, which increased drag, raises consumption to 6.8-7 l/100 km.

Theoretically, a better dynamic solution would be the 1.33-litre, 131 HP, turbocharged petrol engine with particle filter. At least in the case of the A-Class, an A 200 with this engine was much more lively than a Mercedes A 180 d with 1.5 dCi and didn’t consume much more. And it should be the same with the T-Class.

The gearshift isn’t on the right-hand side of the steering wheel column, like in a genuine Mercedes, but in the classic place on the centre console. But beyond that, you can’t fault anything, as the EDC, sorry DCT, dual-clutch, seven-speed gearbox shifts as smoothly and easily as in a passenger car. If you want to shift even faster, it also has a Manual mode. The standard assistance systems keep the T-Class on track, but adaptive cruise control is not available. On the other hand, you get a good view of traffic through the large windows, with only the front pillar obstructing it a little when cornering.

The second big difference from the Citan is the suspension tuning. Whereas in the Citan Tourer the rear axle bounces around on bumps when unloaded, the suspension being optimal only when the car is loaded, the tested T-Class equipped with the optional 17-inch wheels doesn’t capitulate to transverse joints and smoothly dampens longitudinal undulations, even with only two people on board. With a harmoniously balanced MacPherson strut construction up front and a torsion-bar axle in the rear, the 1,811 mm tall van is stable in curves and leans only moderately. Steering isn’t incisive like the A-Class, but it’s not indirect like a van either, but precise, easy to handle and with decent feedback. If you don’t have high dynamic demands, a long drive can only be enjoyable. And access to the rear is easy thanks to the two standard sliding doors, which don’t, however, have power-assisted closing like the VW Caddy, and the electric tailgate isn’t available. 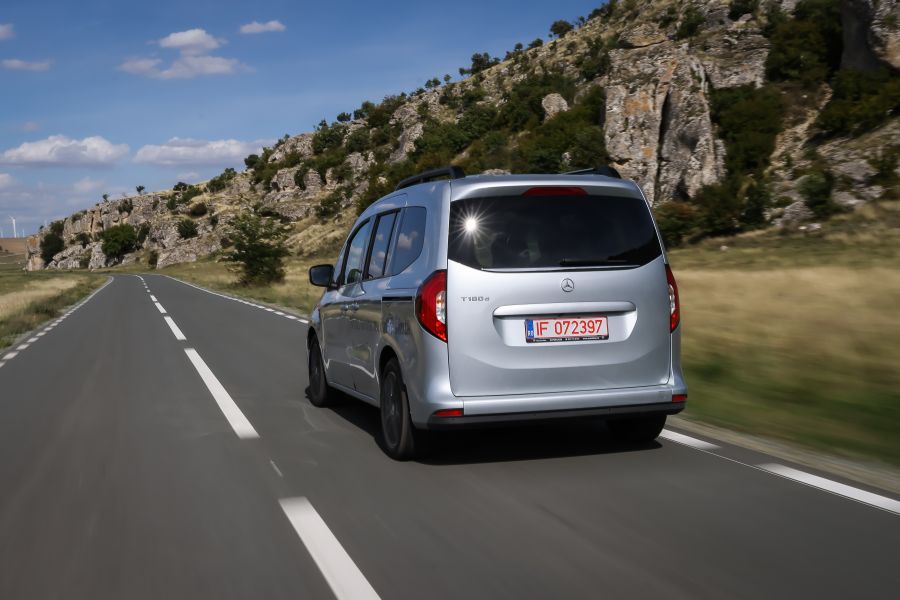 A 7-inch screen multimedia system is standard, but navigation costs an extra 819.91 euros. After getting used to larger displays, it’s not exactly the most comfortable to operate a 7-inch touchscreen, but Mercedes has at least kept the mini-touches on the steering wheel, which are very handy. I didn’t miss the touchpad from the A-Class family, but I do seem to miss the old controller, which would have been practical in this case.

Instead there are two USB-C sockets at the front and two classic USB ports at the back. And I also appreciated the classic climate controls, which, while identical to those from low cost Dacia brand, fit very well in a Mercedes, with large, pleasant-to-touch buttons with displays inside that are easy to access and operate. In addition to the assistance systems offered as standard, there’s even an optional automatic parking system for 852.04 euro.

In future, those who want even more space or have a family with more than three children will also be able to opt for a long version with seven seats, and for the eco-conscious there will be an electric version, the EQT. In fact, from 2025 onwards, Mercedes will only launch new vans/commercial vehicles with electric propulsion on the new VAN.EA platform.

Better soundproofed and slightly more stylish than the Kangoo, the Mercedes T-Class has several advantages over its French sibling. It’s spacious, modular and ideal for a young family but too expensive, especially as the 1.5-litre diesel doesn’t offer enough performance.