The two-engine system is based on the highly refined EQS 580 but with a few modifications to increase the performance. As with the EQS 580, the two synchronous motors work in tandem controlled by the Torque Shifting function and offer a fully variable all-wheel drive. Normally, only the rear engine works, but at high speeds or when more traction is needed in high speed corners, the smaller engine on the front axle also comes into operation.

For better performance, the engines have been modified to run at higher speeds than the EQS 580. To this end, the rear engine has a six-phase design based on two windings with three phases each. The stators with move-in winding ensure a particularly powerful magnetic field.

The engine cooling system has also been substantially improved to allow for repeated accelerations. The centerpiece of the sophisticated design is the so-called water lance in the shaft of the rotor, which cools it. Other AMG-specific cooling elements in the cooling circuit are special ribs on the stator and the needle-shaped pin-fin structure on the inverter, which is made of high-performance ceramics. 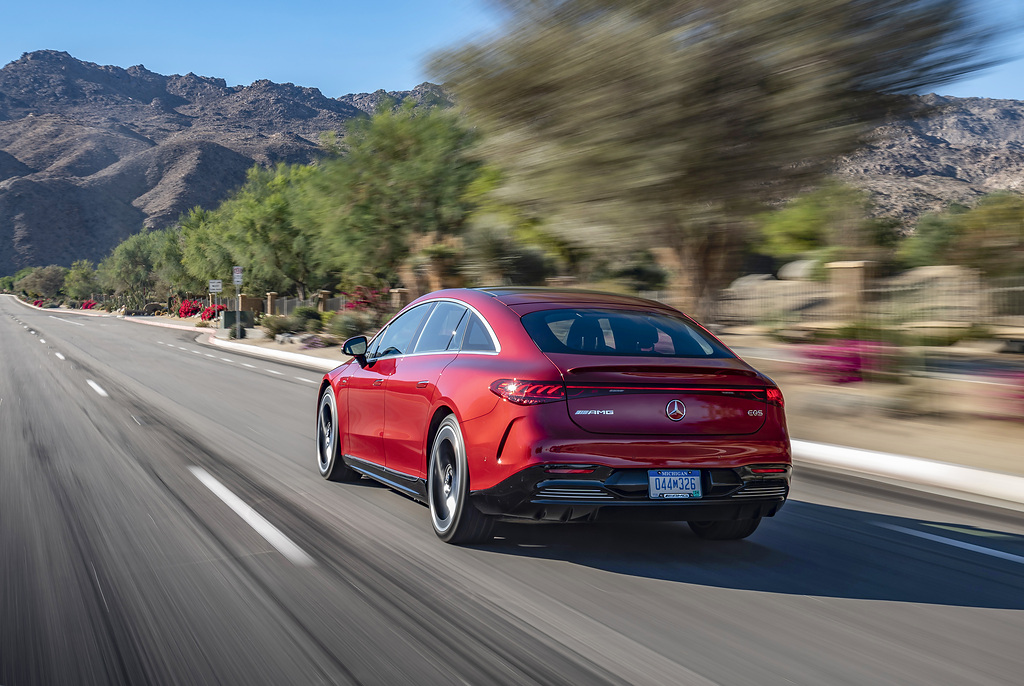 More agile than EQS 580 but the suspension is more firmer

And agility? Mercedes-AMG EQS 53 4Matic + comes standard with integral steering that allows the rear wheels to rotate in the opposite direction to the front ones up to 60 km/h with a maximum angle of 9 degrees and the drive train was modificed. Thus, rear axle beam, subframe and rear motor mountings are new developments exclusive to the AMG models. At the same time, transverse stabilizers, as well as the wheel carriers and control arms are derived from other AMG Performance models.

AMG EQS does not have active stabilizer bars like Porsche but uses the air suspension modified by AMG.
As in the AMG GT 4-Door Coupé, the standard air suspension of the EQS 53 4MATIC + uses two pressure relief valves. These continuously variable control valves located outside the damper allow the damping force to be adjusted even more precisely to different driving conditions and driving modes: a valve controls the rebound damping, i.e. the force generated when the wheel rebounds. The other controls the compression damping when the wheel compresses. The rebound and compression stages are controlled independently of each other.

The first test drive took place in California on a route combined with highways and canyon roads. The light steering is incisive and more communicative than in the EQS 580 with the advantage of a larger contact spot on the front tires. 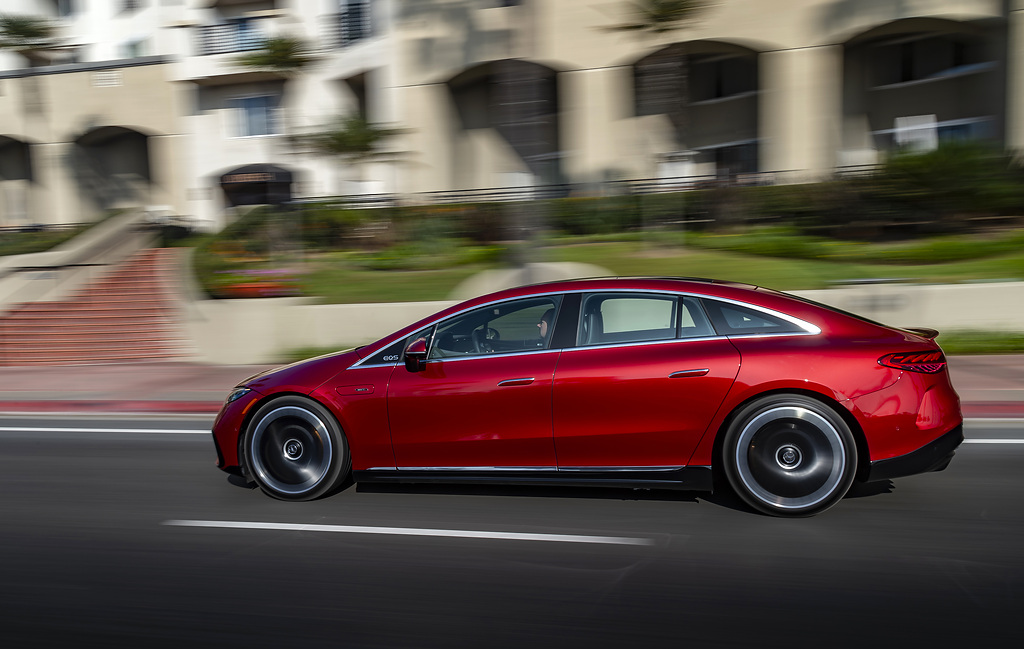 The Mercedes-AMG EQS 53 4Matic + becomes more dynamic in Sport and Sport + mode (the driver also has Comfort and Slippery modes available plus Individual mode), reacts spontaneously to the change of direction and is very stable giving great confidence.

The integral steering fully contributes to the remarkable agility for a limousine that exceeds 5 meters in length as well as the battery mounted very low in the floor which gives it a lowered center of gravity.

On the other hand, in corners you can feel the inertia of large masses but the completely variable torque distribution that allows power transfer up to 100% on the front or rear ensures efficient traction on any surface.

The neutral road holding is impressive and when you accelerate harder it feels like the rear engine has more power and gives a typical feel to a rear-wheel drive car.

You can also accelerate without worrying when coming out of corners because the traction is superb. If you still exceed the limits, the ESP system reacts quickly by braking each wheel individually and redistributing torque to the wheels with more grip.

With the modifications made by AMG, the suspension of the Mercedes-AMG EQS 53 4Matic+ is a bit firmer than that of the EQS 580, but there is still a small roll. But the movement of the body is progressive and allows you to react in time.

On the other hand driving comfort is not as distinct as in EQS 580. The air suspension is quite firm even in Comfort mode. When the road surface is not perfect, there is a harshness of the suspension and there is a more obvious vertical movement at the front axle that does not cushion the short bumps too well.

Also, the rolling noise of the tires is higher than at EQS 580.

Normally, Mercedes-AMG EQS 53 4Matic + is very quiet but you can try AMG Sound Experience which offers some synthetic sounds. In the basic standard version Authentic, the driver can adjust the sound intensity according to the chosen driving mode.

Optionally, from the center display or using the buttons on the AMG steering wheel, the driver can select three types of sounds “Balanced”, “Sport” and “Powerful” in any driving mode. And the AMG Dynamic Plus package also comes with Performance sound.

The same big battery but less range than EQS 580

With a wheelbase of 3210 mm, the AMG EQS offers plenty of space in the rear and the trunk volume between 610 and 1770 liters is 154 liters bigger than the Mercedes-AMG GT 4 door coupe.

AMG EQS 53 4Matic + benefits from very good aerodynamics, the Cx being 0.23 compared to 0.20 at EQS 450. The Digital Light headlights offered as standard flank the AMG-specific black panel grille with hot-stamped vertical struts in chrome which is in contrast by the front apron in the typical AMG A-wing design, painted in high-gloss black and features chrome trim.