FIRST COMPARISON TEST Mercedes-Benz A 180 versus Audi A3 Sportback 1.4 TFSI, BMW 118i

FIRST COMPARISON TEST Mercedes-Benz A 180 versus Audi A3 Sportback 1.4 TFSI, BMW 118i. Some cars are so full of character that they cannot even dream of winning a comparison test, but the affection of their fans. And the Mercedes A-Class and the BMW 1 Series are the best examples. Now Mercedes kicks back with a more comfortable adaptive suspension. Is that enough to beat the Audi A3 Sportback?

It’s not always easy to be reasonable, neither it is to choose the ideal engine in the premium compact segment. Audi, BMW and Mercedes, all offer multiple options in the gasoline field. Audi alone advertises below the 1.4 TFSI with 150 hp tested here, two other versions with 125 and 110 hp.

BMW comes in 118i guise with 136 hp, ready to compete with the Mercedes A 180 with 122 hp. Under the BMW’s bonnet now tinkers the new 1499 cc three-cylinder turbo. The A-Klasse still comes with the proven 1.6-liter four-cylinder turbo, but now comes with a better chassis. 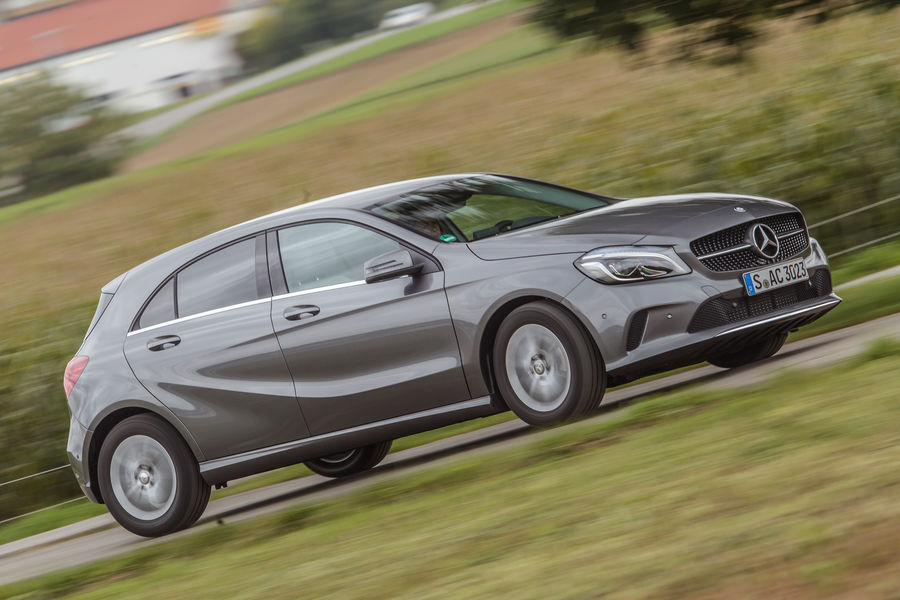 The variable suspension available for the new A-class is, of course, not free, with Mercedes charging 1.238 Euros for the privilege, one of the most recommended extras available for the A 180, as a matter of fact. Push the Dynamic Select button in the center console and four drive modes options are ready to be employed, the one named Comfort proving to be the most pleasant too. A proper flying carpet the A-Class is not, but at least the German compact now manages to filter out most road bumps fairly confidently. It still feels a bit uncomfortable when coping with ample pot holes, especially under a higher payload.

A talented workhorse was a depiction that alluded the A-Class and the facelift can do little to change this. As before, you sit well in the front, but once seated in the back you are struck by the obvious lack of headroom and shoulder space. Getting into the rear is rather cumbersome in the first place, anyway, all because of the low roof. 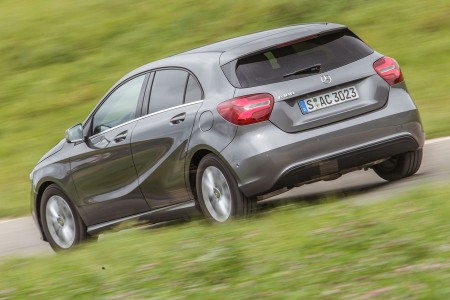 Let’s get back to the rosier front area, then. Here the A 180 is finally a Mercedes complete with a set of proper seats and a high-quality interior. The operating logic behind the safety and infotainment features is also better, even if this is (still!) not always determined at first glance. The central rotary knob is still present, while the the combined wiper and turn signal lever on are placed at the left of the steering wheel and the gear selector (if equipped with the automatic transmission) on the right. American way!

Not much to report from the driving perspective, either. The 122 hp direct-injection gasoline engine is still not a fire cracker in therms of pulling power, however, it is very quiet and smooth, plus quite economical. Not as sporty as the BMW or the Audi, but definitely up to its task. What there is left to say, then, of the A-Class? The steering is smooth and precise, even that does not markedly differ from that of its predecessor. More surprising is that the A 180 is not the most expensive car in this comparison and this secures him the second place at the end. 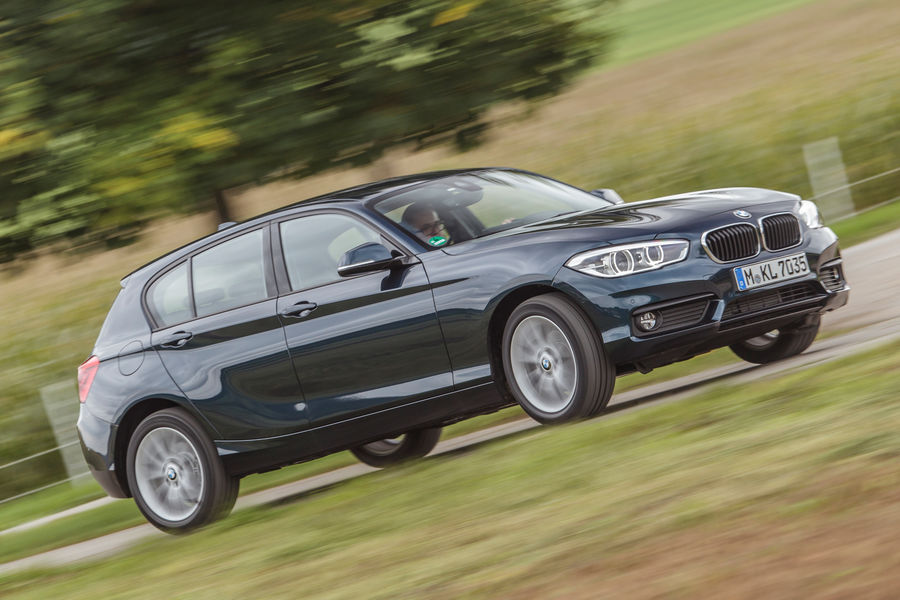 BMW 118i with three-cylinder power

The big news here is the new three-cylinder engine, part of the B38 BMW engine family developed on the revolutionary principle of the “unique” 500 cubic cylinder multiplied accordingly. In the case of the 118i, the L3 turbo makes 136 hp, but gives a rather cumbersome performance in this test. It runs relatively grumpy and even more surprisingly proves to be somewhat lax on full throttle and revs rather… unwillingly.

In addition, the new three-cylinder turbo 118i consumes about half a liter of premium gasoline more than the four-cylinder from Audi and Mercedes. Progress through downsizing is barely visible then. Especially since the 118i can be outsmart by the nominally weaker A 180. And we can’t blame this on weight since both models are credited with practically the same figures: 1,394  for the BMW and 1,393 kilos for Mercedes.

What even worse, the 1 Series lost a fraction of its handling talents during the model transition to the current F20 generation. Although its steering has to be the most sensitive in this segment, it resonates not as easy or as fast as before in the corners. By contrast, the gain in comfort is not as high as anticipated as the Bavarian doesn’t seem to ride as smoothly as the A3 and now even the A-Class is not as strikingly harsh as it used to be. 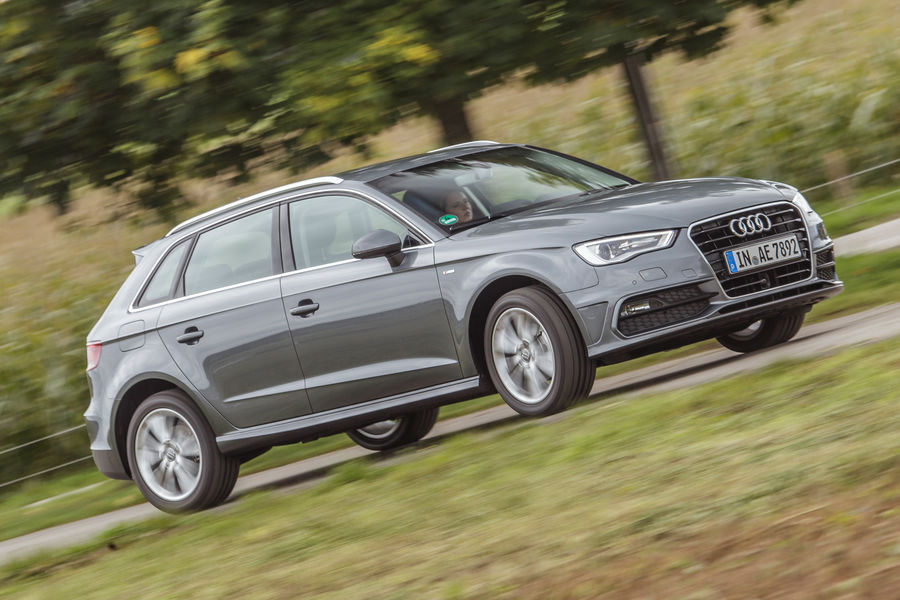 Jack of all trades? Certainly these are the shoes the Audi A3 Sportback should fill. Much of this can be attributed to the engine, which is the strongest here with 150 hp. But the 1.4 TFSI with cylinder deactivation, which decommissions two of these in partial load mode, is not only strong and smooth, but also very economical. In almost all test scenarios it consumes slightly less than the rivals. Only at full load, in sport mode, the TFSI engine consumed significantly more than the Mercedes unit.

No sweat, however, as the talents of the A3 Sportback don’t end here. With its wagon-like body, it offers more space, a feat quickly reflected in everyday use. Its trunk is more useful and has a generous loading aperture. In addition, though not to our surprise, it leaves the best-quality impression too with a plethora of high quality finishes. The differences between its competitors here are not large, but nevertheless detectable. 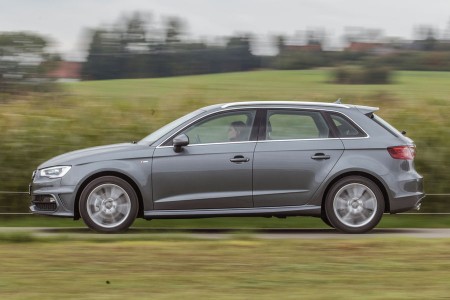 As boring as it might sound, yes, the Audi is always a touch better, at every discipline. This applies to the performance, as well, owing much to the lower weight, of course – the Sportback is after all 70 kg lighter than its Series 1 and A-class counterparts. This explains the slightly more agile handling, apparently. In the challenging slalom test the A3 is always a tad faster than 118i and A 180. It does not matter, you might say, but in everyday use, this talent returns a safe ride and neutral cornering behavior.

Meanwhile, the other passengers can enjoy the well contoured seats and the supple ride comfort. The A3 is the most balanced and harmonious and the other two can do nothing to change our hearts. With the A3, it is certainly not difficult to be reasonable. 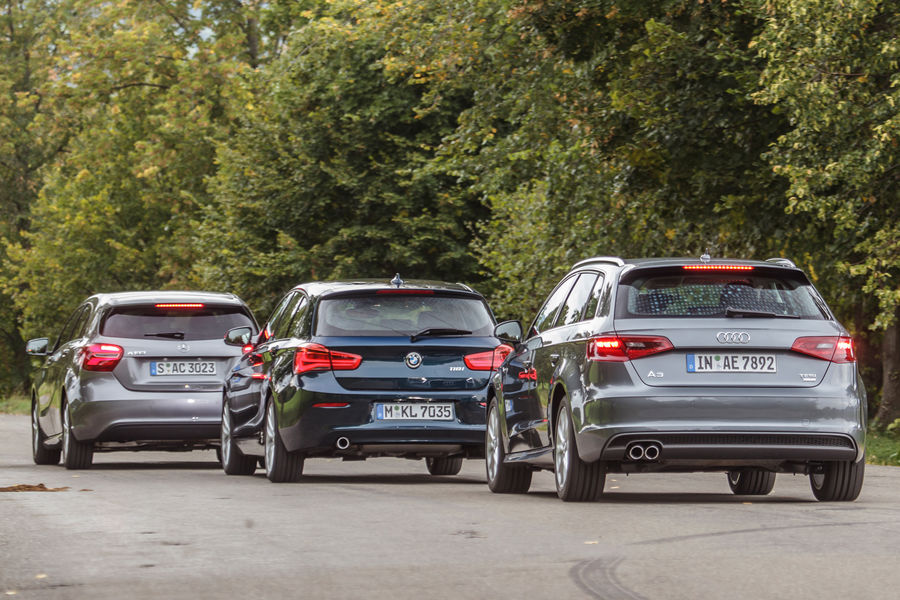 Verdict
The A3 is clearly ahead of its rivals: drive, space, comfort, everything is a tad better than the competition. A very clear victory, then. The improved comfort really helps the A-class’ driving manners. Also pleasing is the smooth-running, economical engine and the safe handling, accompanied by an honest costs balance. The BMW on the other hand is the biggest disappointment here. The engine in the 118i is rough and rustic, the comfort is only moderate. The sensitive steering and the slightly more involving handling simply can’t save the BMW anymore.