On the other hand, the models with the new Plug-In Hybrid technology are in no danger to be banned in big cities around the world because of emissions. Theoretically, VW Passat GTE and Mercedes C 350e can be driven pure electrically for 50, respectively 31 km.

Both cars have a similar drive structure. The electric engine is placed between the thermic engine and the gearbox and the Li-Ion battery is positioned above the rear axle and affect around 30% of the boot space.  The battery can be charged at a wallbox or at 220V network. The 9.9 kWh battery in Passat needs between 2h 30 minutes and 4 h 15 minutes to be charged while the smaller 6.4 kWh in C 350e needs between 2 and 3 hours to be charged.

Both cars rely on Navigation data to optimize the drive. If a programmed route will end in the city, the computer retains enough battery reserves to run on electric power as much is possible in the city. There are also modes in which the driver can choose to run only with electric power, to recharge the battery or to preserve the battery energy. 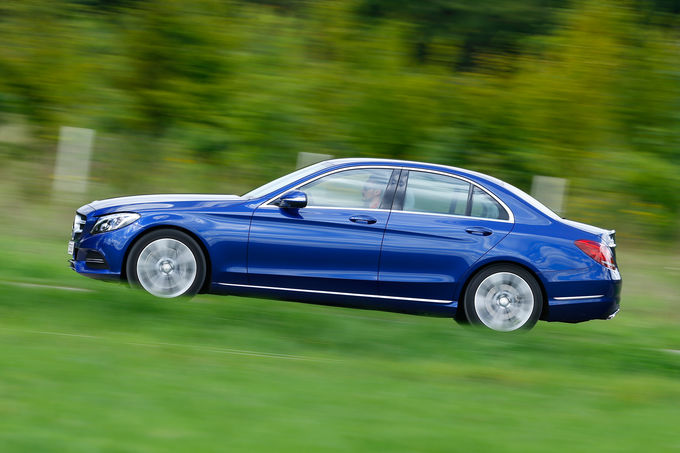 Like the S 500e, Mercedes has an intelligent recuperation system which works in conjunction with Collision Warning and Emergency Braking system. If the car in front brake, Mercedes uses the recuperation with maximum efficiency. If the car in front goes with constant speed, C 350e decouple the engine and the car goes in Sailing mode also with maximum efficiency. 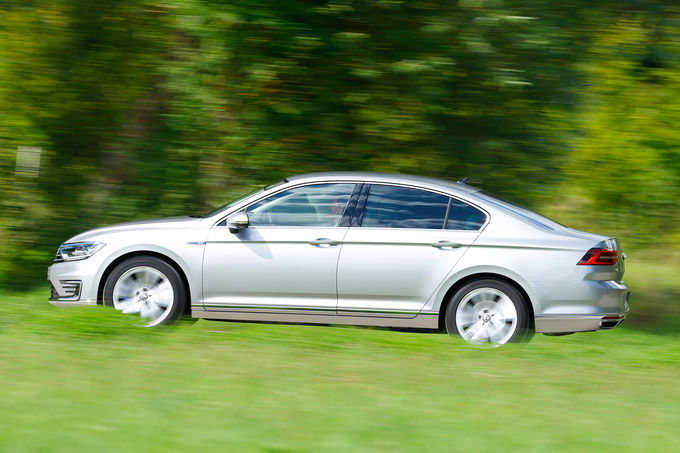 On the other hand 112 g/km CO2 correspond to a fuel consumption of 4.3 l/100 km for a diesel engine, which is an impressive result. Passat GTE has also a greater electric range with 47 km, very close to the 50 km official electric range.

We can explain the longer electric range of Passat because of its bigger battery. Passat has also a more performant electric engine while Mercedes has a stronger petrol engine. In this way there is an explanation also for lower fule consumption in Passat. 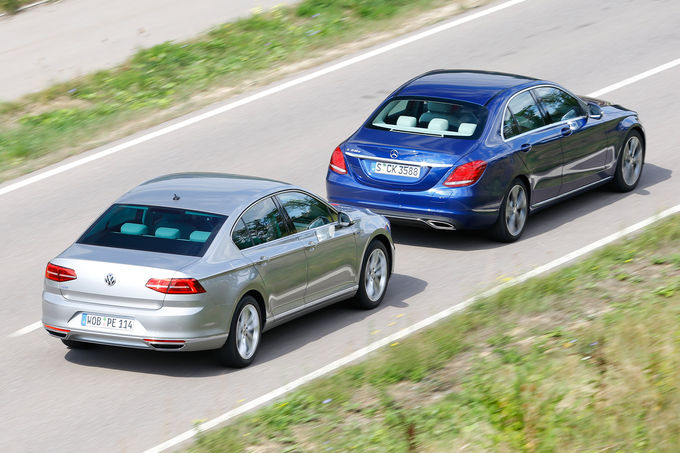 With the Airmatic suspension standard in the C 350e, Mercedes offers a better comfort and a more homogeneous behaviour despite the fact that Passat GTE test car has the optional adaptive suspension. The 125 kg battery in Passat affect the handling and the steering is not so precise and direct lile in other VW models.

Who understand german language can read the full test in auto-motor-und-sport website.