Uke is back to tell us about the first crash test in the history of Mercedes-Benz. The very talkative yet very interesting guardian of the Mercedes-Benz Museum puts safety first.

The 300SL Gullwing. No airbag, no safety belt!

The 1955 Mercedes-Benz 300SL Gullwing Coupe – the fastest production car of its time. An amazing car with an access which is close to impossible. And as fast as it could be and as strange it may seem today, it did not have a seat belt. But an Austrian-Hungarian engineer went on to revolutionize automobile safety. Joining Daimler-Benz in 1939, Bela Barenyi turned out to become the father of passive safety. He was the one who invented the non-deformable passenger cell and the energy absorbing crumple zone in the rear, first used in a fintail model, together with the front shock absorbers.

Uke dresses in sumo suit to show how the system functioned half a century ago.

After all the explaining he had to do, the night guard decided to take a nap in the boot of a car. We have no idea how safe that was, but it happened just before he woke up to present the 1973 Mercedes-Benz ESF Experimental Safety Vehicle, that gave passengers a much better chance of coming out the accidents unharmed. It was the first car to ever feature an airbag! Or a luftsack, in German. And it was not filled with air, but nitrogen. 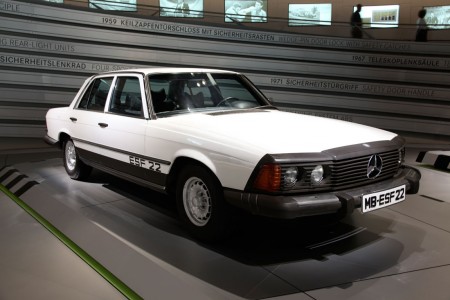 The ESF 22 was built on a modified 1971 S-class platform and designed to ensure passenger survival in 65 km/h (40 mph) impact. The ESF 22 came with a driver’s-side airbag, three-point belts with pretensioners and a 9.6-inch front-end bumper extension intended to absorb crash energy and ABS brakes. The ESF 22 was only the third out of a series of four experimental vehicles and it was presented at the International ESV Conference in March 1973 in Kyoto, Japan.

And we’re not flying all the way to Japan just yet. We’ve got a late night date with Uke, again! So see you next week, when he will be introducing one of his personal favorites: the C111 in the episode about the aerodynamics.