It was just like a movie scene. Former racing driver Juan Manuel Fangio was kidnapped from his hotel bar in Havana in 1958 and taken by an American car to an unknown place. Fidel Castro’s men were the kidnappers. They wore masks and had guns that they were ready to use.

That night, there were three cars rolling through the streets of Havana, taking the former Mercedes driver away. The rebels were just trying to draw attention after Fidel Castro’s failed attempt to become the state’s leader. Fangio, then driving a Maserati racing car, was released just after the race. 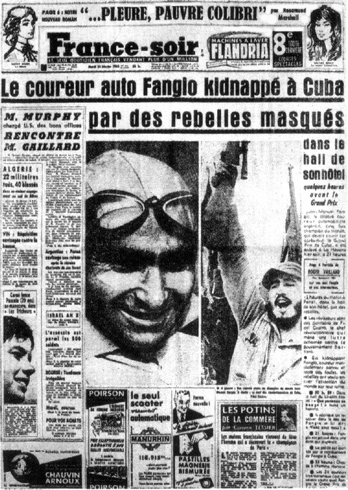 When Fidel Castro became “El Lider Maximo”, just the next year, he invited Juan Manuel Fangio to Havana, but the driver, still a bit shocked after his kidnapping, declined the invitation. He only set food on Cuban ground in 1981, when he signed a supply contract that brought Mercedes-Benz trucks to the local government.

“They treated me well, my life was never threatened, not for a second”, Fangio told about his action movie-like adventure in Cuba. The island in the Atlantic is the land of the mesmerizing American cars, but who knows what will happen to them from the day that Fidel Castro died? Check out an extensive photo gallery with the motorized beauties right here!