Fake Mercedes-AMG G63 4×42 meets its idol in a strange encounter. It is actually a G-wannabe. Under the yellow mask, there hides a Suzuki Jimny.

The Suzuki Jimny has always looked like a miniature G-Class. But the Jap took things a bit further and turned into its idol, the Mercedes-AMG G63 4×42. Of course, it comes in a different size, but except for the proportions, the model could fool just about anyone. It can’t though fool the real G63 4×42.

The transformed Jimny is the creation of a company in the United Arab Emirates, that is specialized on such conversions. Therefore, anyone who paid for a Jimny can pay a little extra for a miniature G.

David and Goliath met on tarmac road in Dubai. When they are next to each other, the difference is jaw-dropping. The 3-door tiny off-roader seems to be covering only about 70% of the height of its opponent, rising at 2.25 meters. The Mercedes-AMG G63 4×42 comes with portal axles and an impressive ground clearance of 450 millimeters. 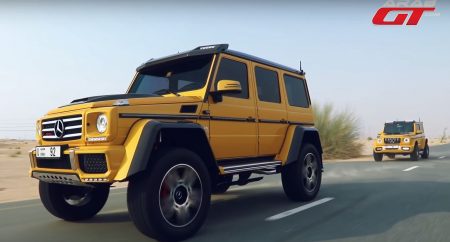 The Arabian experts have change most of the body panels of the Jimny. It now got a front end similar to the AMG variant of the G-wagon, featuring vertical slats and a three-pointed star in the center of the grille. A side exhaust, similar to that of the German off-roader, pops out on the side. Hood scoops, flared wheel arches and light bars on the roof are part of the package.

As for what is under the scooped hood, three Jimny naturally aspirated engines would probably fit in the engine compartment of the Mercedes-AMG G63 4×42. There are only 100 horsepower for the Japanese, but the 4.0-liter V8 lays 425 horsepower and 610 Nm of torque on the ground. The test shows that it takes the German 6.06 seconds to run from a standstill to 100 km/h (62 mph), while the Jimny needs about ten seconds more for that: 16.86.