Fairy-tale life in a blue Pagoda

50-years old today and still acting like a teenager. It is the Mercedes-Benz 230 SL, a blue convertible manufactured back in 1967, owned by Jan Sentyrz from Poland. He travels, in south-west Poland in his Pagoda, to show his guests the land of fairy-tale castles.

“I first saw the car decades ago in an auto magazine and long dreamed of one day being the owner of such a sports car,” Jan Sentyrz tells. And he finally found one that would match his dreams, in the United States. A fully restored roadster that is the perfect means of transportation on the road to historic mansions and luxury residences of the Hirschberg valley. 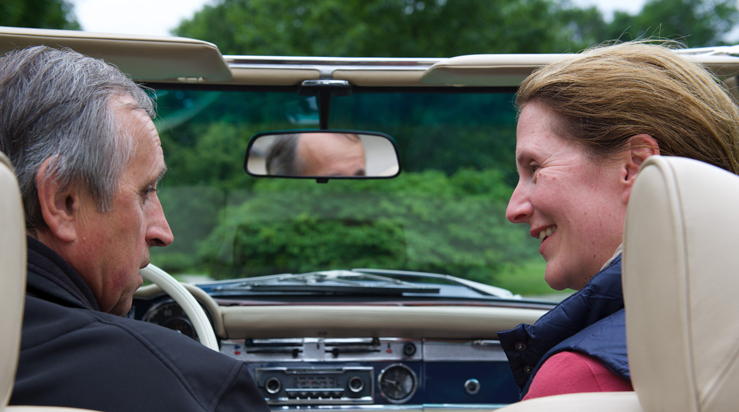 The route takes him by fields dotted with red poppies and along densely overgrown avenues. On Jan Sentyrz’s front passenger seat, there is Elisabeth von Küster, a former Berlin resident, moving to the area a quarter of a century ago. She is fighting to conserve the region: “Anyone wishing to bring all these magical castles back to life must be something of a romantic. And rather crazy.”

So Piotr Napierala must be one of the crazy ones. He bought a building that looked like it would soon collapse, in the small village of Wojanów. A castle given as a wedding gift by the Prussian King Frederick William III to his daughter Luise, in 1825. He restored it and converted it into a conference hotel, keeping the fairy-tale look, with all its turrets, fountains and fire-red roof. 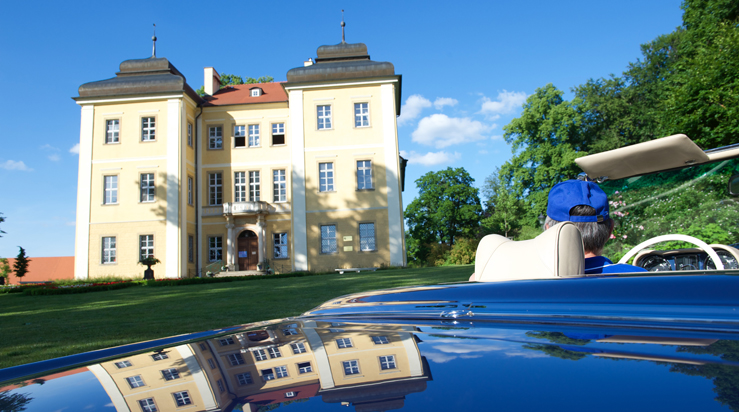 Blasts of wind as cold as the nights in the centuries-old castles don’t interfere with the pleasure of the road trip. Elisabeth von Küster has lived through cooler nights in the rooms of the castle she restored. No heating system for her rooms, only for those of the guests. From the castle, a 360 degrees panorama of the snow-covered Sniezka, known as Schneekoppe in German, a 1603-meter-high mountain, is worth the trouble.

Their destination is Wroclaw, the town of 600,000 people living in Poland’s 4th largest city. 140,000 are students. The old town is a stage for artists and strollers, in the shade of the 13th-century town hall.

The 12-room hotel Castle Lomnitz is located in an idyllic nature park on the Bober river. Some kilometers away, there is the Wroclaw Topacz Castle, also transformed into a 4-star hotel, surrounded by grounds that host a collection of classic cars, many vintage Polish automobiles included.