The new SLK – which will bear the SLC name starting with this facelift – has reached that moment where it spends all its days running (big) circles on the famous Nurburgring. Our spy photographers were on site and captured a new batch of images.

It may be called a “facelift”, but in reality it involves the back as much as the front end of the car. With these new spy shots it’s plain to see where the changes for the new SLC will be, even though you can’t really tell exactly what it will look like.

So, the black covers hide the front radiator grille, the front bumper and the headlights (the overall shape is clearly visible, but the graphics inside is what will define the new SLC’s visual character. Pretty much the same story goes for the rear: the bumper and air diffuser are rather well covered while the taillights are basically hiding in plain sight just like their front counterparts. 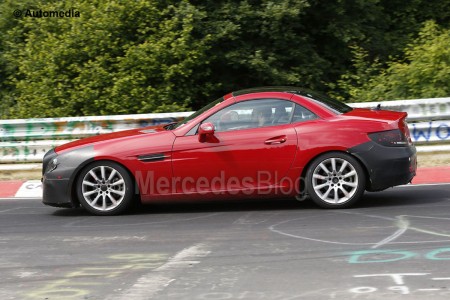 The more important part of the SLC refresh, though, comes from under the bonnet where the new car will get more powerful four cylinder engines and an optional 9-speed automatic transmission which should be able to give the new car a very well balanced performance/efficiency ratio.

Rumours are saying that Mercedes-Benz plan to launch the new SLC roadster no sooner than next year’s Geneva motor show in March. With the current model on the market since 2011, this would make it a very late facelift indeed, signaling the fact that Mercedes-Benz is trying to boost its sales for the later part of the car’s career. The convertibles market isn’t in any way at its peak with sales on a constant downfall and Mercedes-Benz is severely affected by that having two exclusively convertible models in the form of the SLC and the SLE (the current SL). 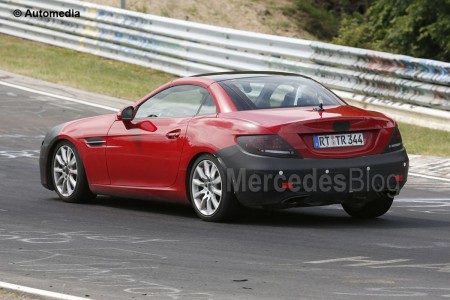 The new letter in the name will also bring more than just an alphabetical reference to the C-Class – the SLC will also borrow most of its exterior and interior features which can only be regarded as good news since the new medium sized sedan (and break) from Mercedes-Benz is quite a looker.

There’s no official talk of a high-performance AMG version for the SLC, but expect it to have a tuned down version of the superb 4.0 liter V8 engine found in the C 63 AMG as well.