The new F1 W06 Hybrid is the proud successor of the successful W05, that was launched ahead of the 2014 testing.

Nico Rosberg will be at the wheel on the first day and on the third day, while the Formula 1 World Champion Lewis Hamilton will drive on the second and fourth day of testing at the Spanish circuit. This driver allocation is the reverse of that which was used at the opening test of 2014.

The new Silver Arrows racing cars will make its appearance in front of the assembled media on the opening day of the test. The public will enjoy live coverage through the team’s social media channels.

According to Toto Wolff, head of Mercedes-Benz Mortorsport, the F1 team is forced to face the big challenge of making the next development step and to focus on every detail in order to build an advantage. “We know that we went into the winter with a target on our backs for the other teams – and we are certain that our rivals will be competitive from the opening race in Melbourne.”

“This is an exciting time of year as our collective efforts all come together in the new car. Everybody in Brackley, Brixworth and Stuttgart has put a great amount of effort into creating the latest Silver Arrow and I thank them for their efforts so far. We are excited to see how the car performs when it begins running,” he added.

Furthermore, McLaren-Honda announced that they will launch the MP4-30 on Thursday January 29 and Ferrari a day later, on 30 January. 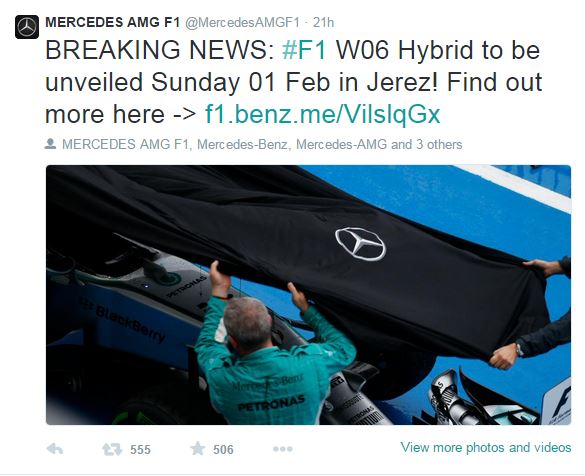