F1 US GP: Hamilton takes a step forward to the title

The 17th round of the World Formula One Championship marked a historical moment: Lewis Hamilton becomes the most prolific British driver in history, after winning the 32nd race, one more compared to the legendary Nigel Mansell. A truly fantastic day for the British, who managed to increase his advantage in drivers’ ranking after an intense fight with his teammate Nico Rosberg.

The Austin F1 round was marked by a shortened starting grid since Caterham and Marussia have been forced to miss start, thus becoming a new episode of the fight between the Mercedes drivers. Furthermore, the real, exciting duels took place in the field, where there is nothing more to lose. As it was the antepenultimate round from the season, the inevitable occurred: the related penalties for exceeding the maximum allowed number of power units and transmission components made no less than three casualties. Due to the fact that he changed the engine, Sebastian Vettel saw himself forced to set off the pit lane, while Jenson Button and Daniil Kvyat have been demoted five positions compared to those achieved in the qualifications, because of the replacement of the gearbox. These penalties and the unavailability of the four drivers of Caterham and Marusia have boosted on the first 10 positions of the grid drivers like Adrian Sutil and Pastor Maldonado. 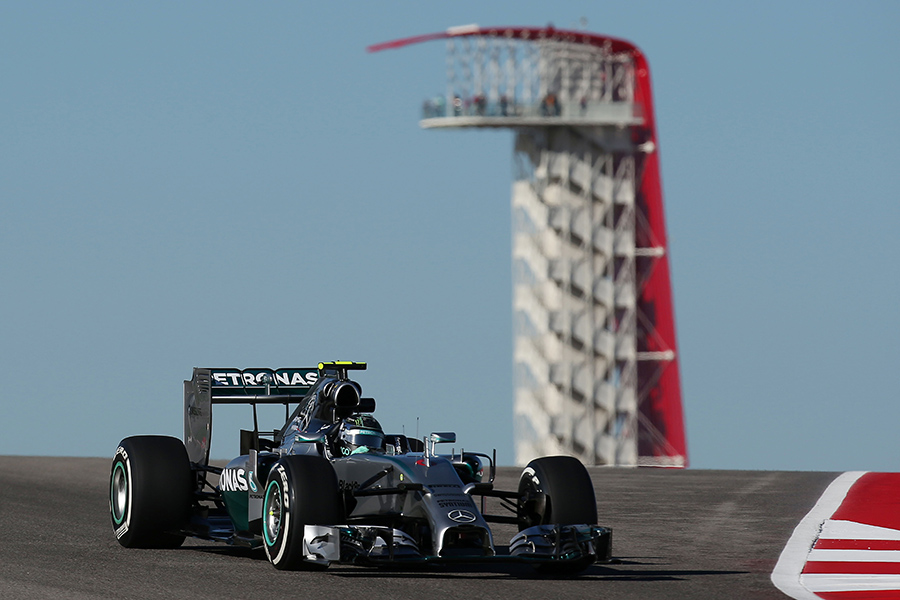 The first line of the grid was taken by the Mercedes drivers, with Rosberg in pole-position, while Williams confirms once again the outstanding season, as Bottas and Massa qualified on the third and fourth. Daniel Ricciardo has taken the fifth spot of the grid, being the highest ranked driver with a different engine apart from Mercedes. He was followed by Fernando Alonso and Kevin Magnussen, while Kimi Raikkonen qualified on the eighth place.

A fratricidal fight. The Austin episode.

The pressure within the Mercedes team has been transferred directly to its drivers, just after winning the constructors’ title two rounds ago. Niki Lauda and Toto Wolff were finally able to declare the fight open between their drivers, not before assuring a fair race, so that neither of the drivers is favoured. The rules are simple: the cars are similar, the pit stop strategy will be the same and the race settings will be dictated by the drivers and their engineers. 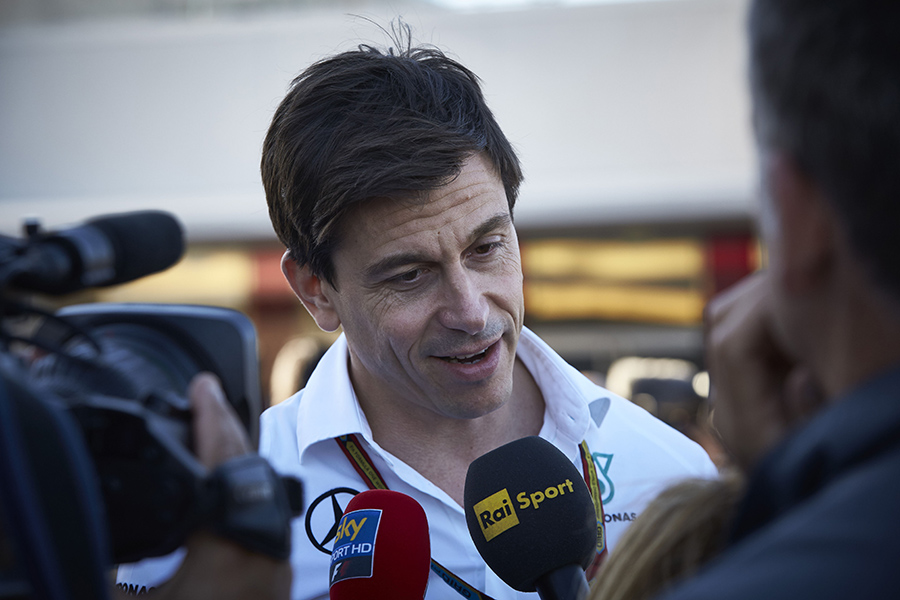 But things are not that simple. Behind the smoke curtain of corporate declarations from the team bosses, it is more than obvious that the fight between the two drivers has reached a level that we can only compare to past happenings from the Formula 1 history. A tough war takes place between Hamilton and Rosberg, behind all the smiles and friendly discussions. This is what defines the motorsport at its highest level, a desire to become the very best, without compromises and scruples.

Even though they aim for the victory with every round, the two drivers are aware that the main stake will be the Abu Dhabi race. While trying to entertain the Formula 1 show, Bernie Ecclestone has decided that the Yas Marina round, the true final of the season will double the points of those involved in the first ten places. Even though it’s rather an exaggerated decision, it is exactly what you wish for to see in the last race of the season: the best driver in the most performant single-seater, fighting to demonstrate that he deserves to become the world champion. 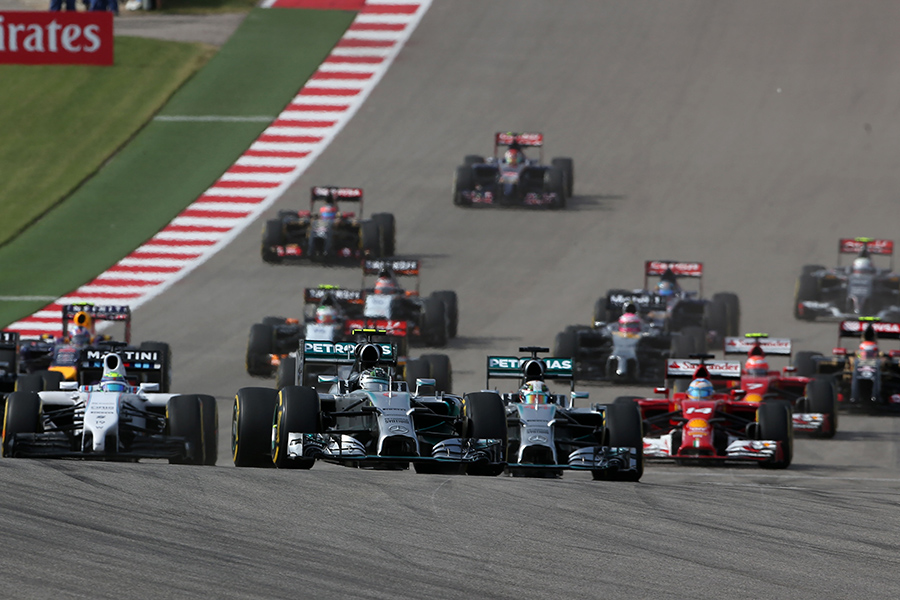 The main subject of discussion before the start was entering the first corner of the race track. As it was preceded by an abrupt climbing, the left hairpin shows a rare situation for the race: the possibility of three alternative lines with a late apex and enough width for fitting three cars. The odd positions on the grid are favoured, as they provide a cleaner line, while the occupants of the even positions have the disadvantage of a dirty track, and also, the need of a 4-5 meters movement to the right side in order to enter one of the ideal lines. The driver that will be able to find the apex with enough resources to enter the following three esses, will gain an obvious advantage.

Even though he has a tremendous pressure on his shoulders, Rosberg manages a perfect start. Hamilton follows him, while the rest of the squad tries overtaking manoeuvres from the first corner. Fernando Alonso tries a ballsy move on the exterior of Valtteri Bottas, but the Finn closes every possible angle and overtakes in the second corner. The field lines up and all the eyes are on the Mercedes leaders that are already building the lead in front of those from Williams.

But things are not that simple in the field. Through the -everything or nothing- kind of evolution, Sergio Perez tries to overtake Adrian Sutil. During his attempt in the 15th corner, he plunges to the interior, hitting Kimi Raikkonen’s rear-left wheel, after which he violently hits Sutil’s car, thus compromising his good positioning and, also, the German’s hopes of bringing the first points for Sauber in this season. Because of his irrational move, Perez has been sanctioned by the FIA officials with seven places penalty for the Brazilian round.

The incident required the intervention of the safety car, as some drivers decided to change their strategy and they entered the pits.

After resuming the race, Rosberg gains an advantage that exceeds the one second limit, in order to impair Hamilton from using his DRS. While the race’s rhythm settles, the Australian Daniel Ricciardo proves that he still has enough to prove and overtakes Alonso after a double attack in the 1-2 corners. This move throws the Spaniard from Ferrari a place  back, thus he sees himself forced to reduce his pace due to an understeer behaviour of his car. Kimi Raikkonen also faces the understeering issue, making it even harder to resist the attacks of Pastor Maldonado. Ricciardo doesn’t waste any time and sneaks on Bottas’s exterior in the first corner, as he climbes on the fourth spot.

Following the default strategy, Hamilton and Rosberg change the tires in consecutives laps. Both take the same decision, medium tires. The Brit feels that this won’t be enough and asks the mechanics to change the attack angle of the front wing, which will reduce the negative impact on the tires’ degradation and the understeering behaviour of the racing car. After these changes, he manages to get into attacking range of Rosberg and, after full laps when he studied his opponent, he decides to attack at the end of the straight, right before the 12th corner. The German tries to react to the high speed of the Brit, but instead of pushing the button to increase power, he decides to activate a potentiometer, thus changing the power map of the whole system. This is brought into effect with one and a half second delay, Hamilton has no mercy, sneaks on the interior, few millimetres from his teammate, and overtakes him.

But things are not silent in the field either. Romain Grosjean and Jean Eric Vergne overtake Sebastian Vettel, the en-titre champion, who decides to enter the pits for the third time in order to change the tires to mediums. It becomes even more obvious the option to enter the pit stops near the end, thus trying to get in points, even though he started from the pit lane.

While Hamilton tails away, the field scatters while trying to protect the tires, especially the front-left side that sees high degradation on the American race track. The race becomes even more intense when Ricciardo approaches Felipe Massa. The Brazilian from Williams enters the pits, and Ricciardo sets a number of fast laps before changing the tires. Thanks to his constant pace he was able to overtake the Brazilian to the third position on the podium.

The end of the race brings no vital changes in the top positions, but the fight for the last points seems to be a rather intense one. Seven laps before the finish, Vettel enters the pits, fits the soft tires, trying to finish the race in the points after starting from the pit lane. After this, he proves an excellent pace, managing to climb from the 14 position back to the 7th place. Meanwhile, five drivers are fighting for the 8-10 places, Magnussen managing to win this duel, closely followed by Vergne and Maldonado, who secures his first point of the season. 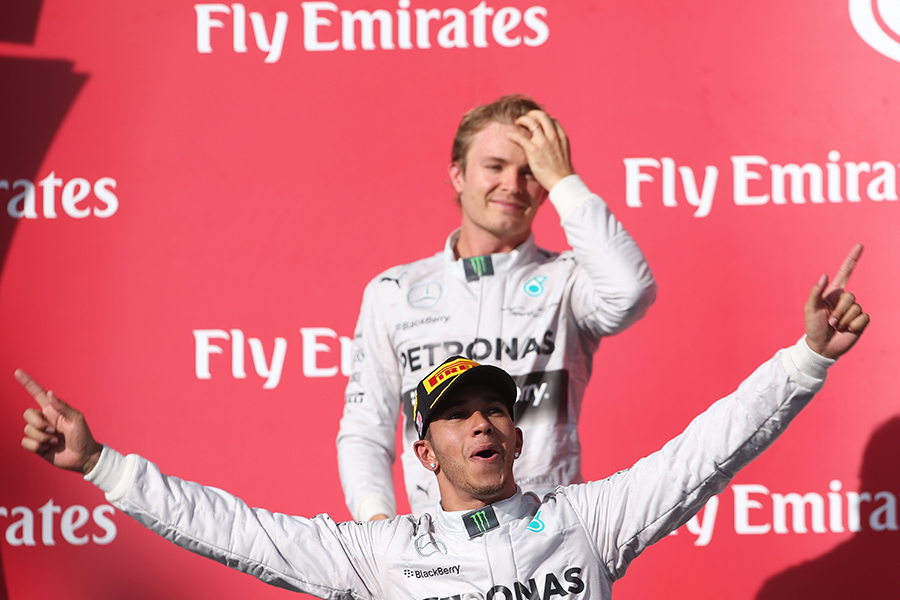 Thus, Lewis Hamilton takes his fifth consecutive victory and increases his lead to 24 points, in front of team-mate Nico Rosberg. Even though he has an important advantage, the fate of the championship is yet to be decided. The two scheduled rounds offer 75 points to the winners, more than enough for a dramatic change in drivers’ ranking. The next round is scheduled for next week on the Autodromo Jose Carlos Pace from Sao Paolo and it promises a real show, because of the race track and the weather forecasts announcing heavy rain.