A Dutchman had the extreme idea of mounting the V12 engine from the Mercedes-Benz 600 SEL into a Mercedes-Benz 190. What came out is shown below.

A Dutchman who also modified  in the past a VW Kafer and installed a 350 HP 2-liter turbo engine in it has thought of building the most powerful Mercedes-Benz 190.

To this end, he modified his own car, a Mercedes-Benz 190 with 2-liter aspirated engine and carburetor providing 90 hp. He replaced the aspirated 2-liter carburetor engine with a 6.0-liter V12 engine from the Mercedes-Benz 600 SEL (W140). 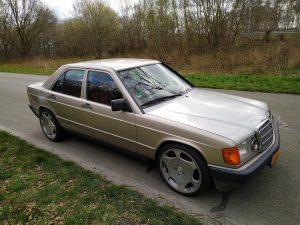 The transformation operation was laborious because the V12 engine needs a lot of space and the Dutchman needed 6 months to install it. And because the engine was very long, it had to move the radiator a lot in front and in order to ensure the necessary cooling it practiced two air intakes in the headlights! 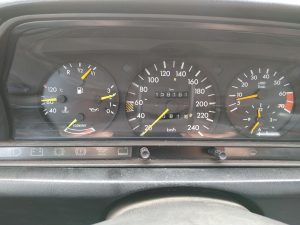 The steering system is taken from an E-Class W210 while the suspension from a BMW 3 Series E36. He also took the 18-inch wheels from a Mercedes-Benz 600 SEL.

With a kerbweight of 1,440 kg with driver, this Mercedes-Benz mutant has some incredible accelerations. With the transmission in S and manual mode, 80-120 km/h takes only 2 seconds and 100 to 200 km/h in just 11 seconds.

The owner says that if he had shift faster, before the red zone , he could have achieved the 100-200 km/h mark in 10.5 or even 10 seconds. And with a shorter gearbox it could go down in under 10 seconds.