Launched in 2013, the Mercedes-Benz S-Class, the best selling luxury saloon in the world will be facelifted in 2017. Here are the exclusive spy pictures including the new dashboard.

This car comes around the corner as a big surprise: Our exclusive shots show the first sign of a slightly facelifted Mercedes S-class, due for presentation in 2017. Exterior modifications are limited to new headlamps on these shots, but we expect a slight makeover at front and rear bumpers as well as the grille, too. 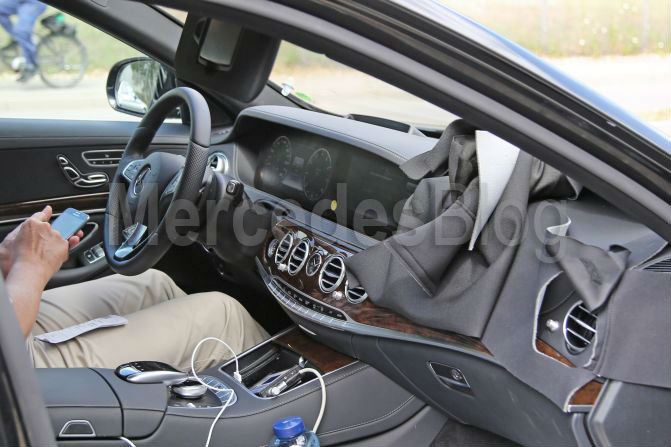 However, there’s also a sneak preview of an altered dashboard, featuring a bigger digital cockpit and multimedia screen without that silver frame and without the mechanical switches separating the tacho- and speedo-indicators from the touchscreen multimedia screen. This layout will be adopted first by the new Mercedes-Benz E-Class which will be launched in the spring of 2016.

New assistance systems with semiautonomous driving facilities will be available.
We also expect the introduction of the new six-inline generation of engines which will debut also on the new E-Class in the next spring.