BMW 5 Series versus Mercedes E-Class: a traditional confrontation, but which, in this case, is taking place on a whole new territory, that of the Plug-In Hybrid propulsion. Comparative test drive BMW 530e vs Mercedes E 350 e.

Both BMW and Mercedes are bragging about their electric/Plug-In Hybrid offensive, competing in statements about who will launch more models with unconventional propulsion. BMW has announced 25 electric and Plug-In Hybrid models by 2025, with 12 off them full electric, while Mercedes has been talking about 50 models for the next 4 years, 10 of them being full electric and counting also simple hybrid models. Anyhow, there are so many in a quite near timeframe. For the moment, each of the carmakers has a full electric model in its portfolio (BMW i3/Mercedes B-Class ED), and in the Plug-In Hybrid segment, BMW has seven models, Mercedes has six. 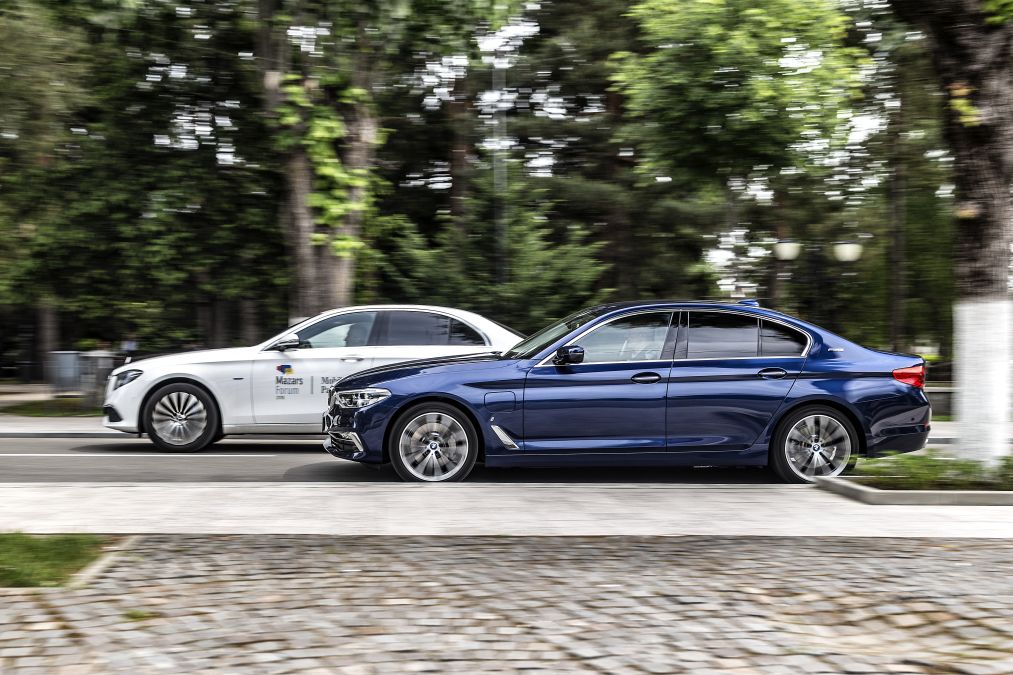 In this comparative test, we focus in the big (business) class, where Mercedes E 350 e duels the BMW 530e. They are both set in motion by a 4-cylinder 2.0-liter 184 horsepower in the BMW and 211 horsepower in the Mercedes, combined with an electric motor of 113 HP/250 Nm for the BMW 530e and 88 HP/340 Nm for the Mercedes E 350 e, inlaid between the combustion engine and the 8-speed automatic gearbox of the BMW and the 9-speed automatic gearbox of the Mercedes.

First of all, the presence of the battery comes with, from the structural perspective, with at least two disadvantages: the weight rises and the boot volume drops. These are the two things that you cannot avoid in a Plug-In Hybrid. On paper, the BMW 530e is 80 kilograms lighter even it has a bigger and heavier battery. Compared to the variants with conventional propulsion, the BMW has a boot smaller by 120 liters, that goes to 410 liters, while the Mercedes features a 450-liter boot, 90 liters less than that of the classic propulsion models. The Mercedes loses less capacity in the boot from the simple reason that the battery of the 350 e is smaller, featuring just 6 kW from that of 9.2 kW of the 530 e. Due to the battery mounted under the floor of the boot, at its back, up to the rear seats, the floor is higher for both models. But the compartment beneath the floor is more practical in the BMW, as it has a more regular shape. Additionally, BMW offers a standard rear bench with a 40/20/40%  split, while it comes for extra 518 euros at the Mercedes.

The interior space is not impacted by the presence of the battery, as the rear passengers sit as low as in the model with conventional propulsion. And the ergonomics of the dashboard is identical, but additionally, there are two buttons located approximately in the same position, behind the drive train selector (Mercedes) or behind the controls (BMW) for the drivetrain adjustment.
In the Mercedes, you can select the Hybrid, E-Mode, E-Save and Charge modes, with thec ar going straight into the Hybrid mode upon ignition. In the Hybrid mode, both engines operate, in the E-Mode only the electric motor works, in the E-Save mode the energy is preserved for a later use and the Charge mode enables the battery charging while driving, with the help of the heat engine.

There are three modes for the BMW: MAX eDrive, Auto eDrive and Battery Control.  MAX eDrive favors pure electric driving, in the Auto eDrive mode, the car runs hybrid, while the Battery Control mode shows the status of the battery and allows the programing of a certain charging level of the battery. In this mode, the battery is not though charged, charging only being possible by switching in the Sport mode of the drivetrain.

Both models feature a battery charging socket, located in the left side of the rear bumper for the Mercedes and in the front left wing for the BMW while the charging cable for the 220V network is standard. And both feature plug locking when plugged, when the car locks for the BMW 530e, while it must be locked/unlocked separately via the ignition key, regardless if the car is locked or unlocked for the Mercedes E 350 e.

Not much has changed from what we traditionally know about the 5 Series and the E-Class. The BMW is sharper and more dynamic, while the Mercedes features a softer suspension, but we can by no means say that the Mercedes is more comfortable than the Bavarian sedan. BMW holds its ground in terms of agility, even though the 530e, due to the battery, there is no option for ordering the integral steering and the active stabilizing bars.

There are though particular aspects of the mix propulsion. In theory, an electric motor develops a higher torque at low revs, which helps on fast getaways. The BMW comes with an electric motor that is 25 horsepower stronger and with a heat engine that is 27 horsepower weaker. In practice though, the feeling is that the BMW gets away in a more vigorous manner, but from 0 to 60 km/h, the accelerations are the same for both cars. It is certain that the heat engine-electric motor-automatic gearbox assembly is more refined and responds with more spontaneity in the BMW. The more intuitive automatic gearbox in the 530e plays a major part in making this impression grow. But when it comes to figures on dynamics, there is an almost perfect draw in all matters, even though the total output of the 530e is 34 horsepower less than that of the E 350 e. In this case, the lower weight compensates the output difference, but also contributes to a better efficiency for the Bavarian model. 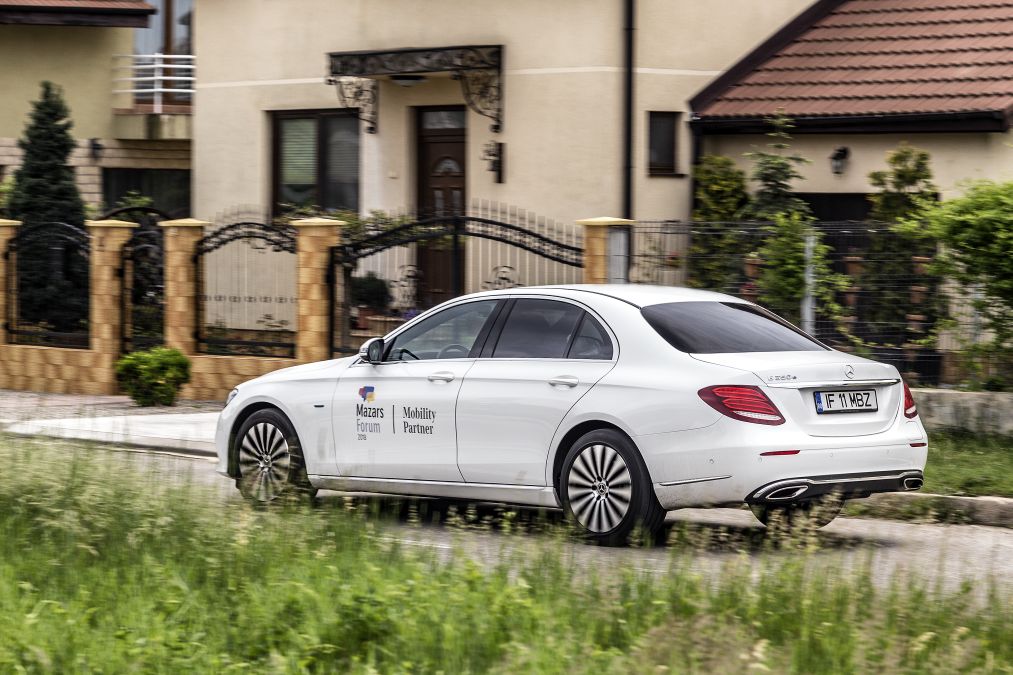 With the battery charged, the BMW covers regardless whether it’s a city drive or a national road, an almost double distance. At least in city drive, the 15 kilometers only provided by the 6 kW battery of the Mercedes are not enough to drive with zero emissions for a whole day. Instead, the 9.2 kW of the BMW features an almost double range in the city, of 30 km.

The situation changes when the battery is discharged, because the fuel consumption significantly grows, but the BMW continues to keep its lead, being more economic with an average of 0.7 l/100 km in the city and with over 1 l/100 km on the national roads. 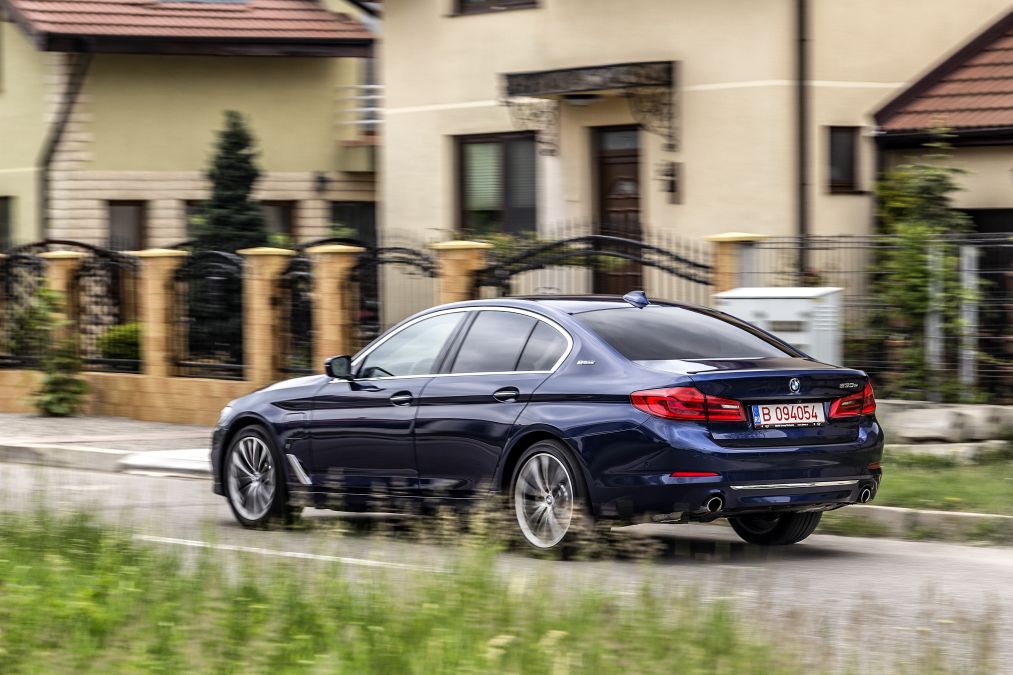 The price difference for the two models is relatively high, of 3,500 Euros, considering that Mercedes has been having a quite aggresive price policy recently. The fact that the BMW is more affordable is connected to the strategy of the Bavarians that offer the Plug-In Hybrid variant with a price close to that of the gasoline model with equivalent output, the 530i, while for Mercedes, the Plug-In Hybrid variant is more expensive than the new E 350. At the compared price, the difference is even greater, as BMW offers the top-of-the-line navigation system for a lower price.

The Plug-In Hybrid variants stand as an interesting alternative, as they combine , in the very same car, the advantages of an electric propulsion with those of a conventional one. In theory, you can drive in the city with zero emissions and, for the weekend, on long drives, you can count on the heat engine. In our case, the electric range of the E 350 e is just too little and does not justify the high additional cost required. With a bigger battery and consequently, with a better electric range, the  530e proves to be more useful for in-city driving with zero emissions.

Even though it comes with the bigger battery, the 530e is lighter, sharper and more economic than its rival. The electric range is decent and the engine-gearbox assembly is more refined. Besides, the Bavarian is obviously more affordable.

The high-class comfort follows the Mercedes coat of arms and the dynamic performance are identical to those of the BMW. Still the electric range is just too short, especially in the city, and does not provide a reason for the price, which is way too high.