The C-Class received the full compliment of five stars during evaluation, achieving an impressive score of 92 percent for adult occupation protection and 84 percent for child protection. It has been tested under the new Euro NCAP rules which instead of valuating cars on frontal crash, side crash and pedestrian protection tests alone, awards the ubiquitous stars for distinct categories like adult occupant protection, child occupant protection, pedestrian protection and safety assist. Since last year, more emphasis has been put on active safety technologies, such as the autonomous emergency braking (AEB).

Frontal Impact takes place at 64 Km/h, 40% of the width of the car striking a deformable barrier. In the side impact, a mobile deformable barrier impacts the driver’s door at 50 km/h. In the pole test, the car tested is propelled sideways at 29km/h into a rigid pole. 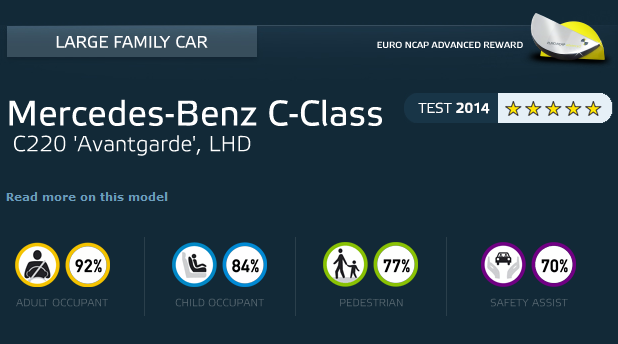 Mercedes did not disappoint. The C-Class’ safety assistance systems scored 77 points with ESP, seat belt reminders and Collision Prevention Assist PLUS® fitted as standard. The autonomous braking system works both at low and higher speeds, avoiding collisions in city environments or lowering the severity of the impact out on the highway. Lane Departure Warning, available as an option, helps keep the car in its lane (‘Lane Departure Protection’).

Overall, Mercedes- Benz C-Class scored maximum points for its occupant protection. The passenger compartment remained stable in the frontal impact and in the side barrier test, good protection being provided for vital body regions according to dummy readings. In the side impact, rib compression can become a marginal issue, while whiplash injury in a rear-impact is unlikely due to the optimal protection offered by the front seats.

The passenger airbag is automatically disabled when a rearward-facing child restraint is placed on the passenger seat. The system is different from previous Mercedes-Benz systems which only worked with specific seats. Clear information is provided to the driver regarding the status of the airbag and the system was awarded maximum points. All of the child restraints for which the car is designed could be properly fitted and accommondated by the car.

Pedestrians have not been forgotten by Mercedes-Benz. The C-Class has been awarded a five-star rating and 77% score, special credit going to the ‘active’ bonnet. When an impact with a pedestrian is detected, actuators lift the bonnet, creating more space between it and the hard structures in the engine bay for improved head protection. Bumper tests also revealed a good level of protection being offered to pedestrians’ legs with only the front edge of the bonnet rated as poor.