The concept behind the BMW 745e and Mercedes-Benz S 560 e is similar: a six-cylinder gasoline turbo coupled to an electric motor and a rechargeable battery with a minimum zero emissions range of 40 km. Auto motor und sport magazine decides which of the two plug-in hybrid luxury sedans is the best.
Both the 7 Series and the S-Class have recently undergone life cycle revisions. Auto motor und sport prefers the design of the Mercedes, because in contrast to the elegant, majestic looking S-Class, BMW chose a more revolutionary approach. The new giant kidneys give the refreshed 7 Series a somewhat intrusive attitude that may be less pleasing to tradition-conscious BMW customers. The plug-in hybrid version of the Mercedes S-Class is only available in long wheelbase guise, so it is 13.5 inches longer than the BMW and 266 kg heavier. The 745e is offered in both short and long wheelbase formats – the car tested here is the SWB, the long version would be 14 inches longer and 5,400 euros more expensive. 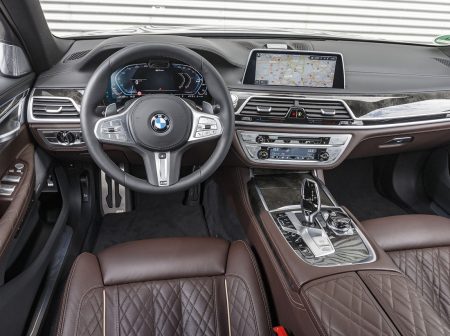 As far as multimedia and ergonomics are concerned, the BMW surprises the Auto motor und sport testers with its remarkably cluttered digital instruments, the rev counter rotating counterclockwise and the limited options in terms of customization. In the Mercedes, the two displays in the wide digital instrument panel can be adapted more precisely to the driver’s wishes, but the operation is not much easier than in the 745e. Thankfully, both the S-Class and 7 Series still have the rotary-push-buttons on the center console, with which many functions can be commanded quickly and safely. The BMW  also offers gesture control. 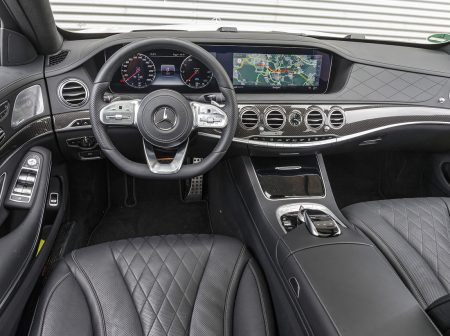 But let’s see what Auto motor und sport has to say about the plug-in hybrid systems of the two luxury liners. After the facelift, the BMW 745e received a new engine. Instead of the four-cylinder turbo used in the predecessor, a 286 hp six-cylinder unit is now the combustion part in the hybrid powertrain which also relies on an electric motor with 83 kW. BMW quotes a total output of 394 hp, 68 hp more than the old 740e. The Mercedes S 560 is also powered by a six-cylinder turbo, a three-liter V6, but comes with a larger capacity battery and a more powerful electric motor after the facelift. The 367 hp gasoline engine plus the 90 kW electric motor yield a total of 476 hp system output.

The driver can choose to specifically set the hybrid system operation or simply let it decide for itself which running mode is ideal thanks to the different settings both the Mercedes and the BMW offer, such as charging the batteries with increased use of the combustion engine or a purely electric ride. With their batteries full, the BMW and the Mercedes promise a range of approximately 50 km. In real traffic, the electric range is closer to 40 km. Charging is faster for the Mercedes which can refill its batteries in 1 hour and 30 minutes from a 11 kW station. The BMW needs 3 hours and 30 minutes. 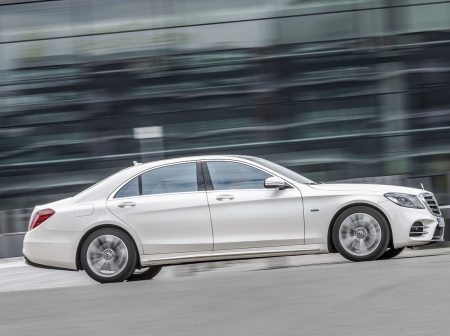 Auto motor und sport chose to test the Mercedes-Benz S 560 e and the BMW 745e mainly in hybrid mode, the most common setting future owners will mostly use. The 745e came ahead when it comes to purely electrical acceleration, sprinting in 4.7 seconds to 50 km / h and in 5.2 seconds to 100 km/h. The S 560 e is almost one second slower to the 50 km/h mark. Nevertheless, the overall stronger Mercedes drives a bit more relaxed and cannot outrun significantly the 745e, also because both sedans run out of steam very precisely at 250 km / h. There are no obvious switching maneuvers, the automatic transmissions act largely smooth and creamy. Much more than the performance, most customers are probably interested in the refinement of the two driving trains and they do not have to worry about compromises, as both models reveal significantly better performance and, more importantly, increased sovereignty compared to similarly powered combustion engine variants lower down the range. And all this in absolute silence, as only at high loads gasoline engines work for most of the time. 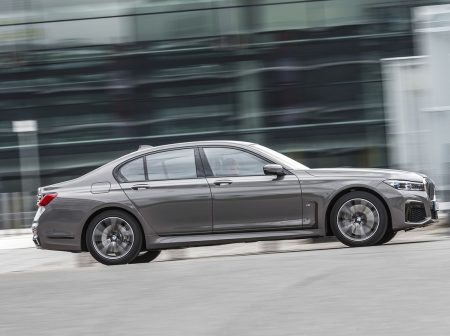 Running costs are also nothing to worry about. On the test round dedicated to plug-ins, BMW and Mercedes are close to each other in terms of fuel and energy consumption: around two liters of gasoline and 22.2 kWh (Mercedes: 19.5 kWh) of electrical energy are needed for 100 km. The Mercedes can charge a little faster and then drive slightly further with his battery before the six-cylinder has to intervene (55 km vs. 50 km).

After test round and refueling the testers advise: Which one would you take? The cheaper BMW or the S-Class in long version? The answer: t

CONCLUSION
Auto motor und sport’s conclusion is clear. If you like to drive, the more dynamic and agile BMW 745e is the one to go. If you enjoy luxury, choose the Mercedes, with its more harmonious drive system and lush comfort. The high price prevents however the S 560 e from snagging the victory. 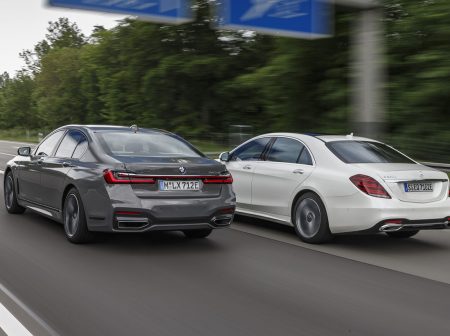