Professional free-skier Jon Olsson has plenty of imagination and a whole garage to apply it on. The turn has come for a Mercedes-Benz G500 4×42 to be converted into a… convertible. This move comes after the Swedish customized a Rolls-Royce Wraith and a Lamborghini Huracan.

Jon Olsson paid almost $300,000 for a Mercedes-Benz G500 4×42 and cut its roof off. The 35-year old wasn’t planning for it, after having granted it with almost 800 horsepower. But he soon discovered that the car with a ground clearance of 450 millimeters, was way too tall for the Monaco garages. And besides, with all the G wagons in Monte Carlo, he was a bit afraid he might not turn as many heads as he wanted. The car was way too much for his own garage in Marbella, Spain. So this is how he ended up deciding to cut the roof off, shorten the height of the windshield and turn the car into a genuine beach cruiser. 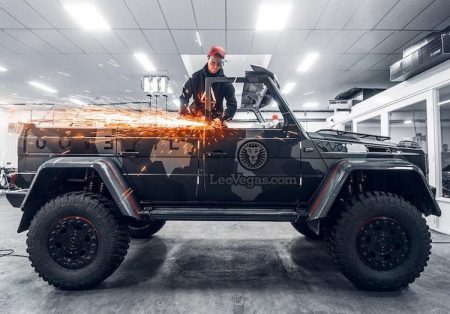 As absurd as it may sound, the move has got its practical purpose in a state where it’s impossible to park giants like that.

Jon Olsson filmed every stage of the procedure. The shooting shows how he and his team turned the Mercedes-Benz G500 4×42 into the most extravagant convertible at all. He also wrapped it in a camouflage with two different patterns for the right and for the left side. 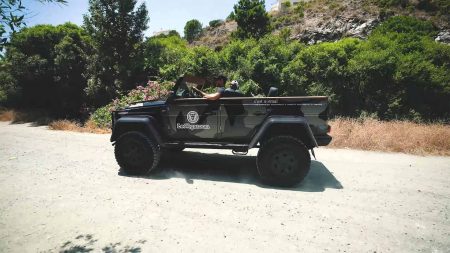 From the standard 422 horsepower, the monstrous 4.0-liter V8 hit 780 horsepower. The high-ride was also fitted with an Akrapovic exhaust for a much louder soundtrack that will surely turn heads on the French Riviera and in sunny Marbella. He must though check the weather forecast before taking his new creation out of the garage. There is no way he can fit a roof onto it.