A driver returning from a holiday found his Mercedes-AMG GT dismantled. He specifically left the car in what he thought would be a safe parking lot.

Jay Tranter from Halesowen had left his Mercedes-AMG GT in a guarded car park, not far from the Birmingham airport and left on holiday with his girlfriend, Agne Kinduryte. The 36-year old man and 32-year old woman were shocked on his return. His £65,000 supercar had been dismantled.

During his 5-day trip, car cannibals had stolen everything they could. The bonnet, the headlights and the rear lights, the hood and even major engine parts. The number plates were also missing. Considering that he had left his car keys to the meet-and-greet car park company, he is not sure now that the insurance company will cover for the damages. 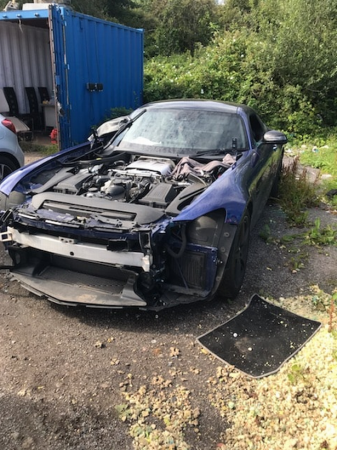 Tranter had paid £52.94 for the parking service where he had left his car on the 8th of July. He was to return on the 12th. Car Parking Birmingham Airport boasts high quality service and safety, with reference to a fenced compound and a 24-hour guarded area.

Jay Tranter says the tracking system showed that his Mercedes-AMG GT was taken to a gravel track in Tile Cross, a few miles further from the airport, soon after he had handed over the car keys.

The new manager of the car park, Amji Khan, apologized for the inconvenience, but he was named in that position after the incident. Khan provided the police with the surveillance camera recordings.

“I feel cursed. This is the third vehicle I’ve had an issue with”, Jay Tranter told Birmingham Live. He is obviously upset that his Mercedes-AMG GT is a far cry from the supercar it used to be. “I’m not sure I want the car back as it’s tainted and the electrics could be damaged.