First review Mercedes CLA: A Class of Its Own

The new Mercedes CLA was extended on the MFA front wheel drive platform, also used by the A-Class, but the vehicles are completely different. First impressions on CLA 220 CDI, CLA 200 and CLA 250 4Matic.

In 2004, Mercedes launched a brandnew fashion line. The CLS Class was copied by all premium manufacturers. Nine years later, Mercedes is once more a path breaker and is creating a new class of its own – the compact 4-door coupes class, where they will not have a rival a few years from now, if we accept the idea that the Audi A3 saloon is a limousine, not a coupe.

The CLA is the third member of the compact front wheel drive Mercedes family, after A and B-Class (followed by the GLA SUV and the CLA Shooting Brake). Although they are using the same platform as the A-Class, the CLA is completely different. And this is why.

For the A-Class, the frame on which the rear axle is set is rigidly tied up to the body shell. We criticized the rigidity of the suspension and the drive train noise. Meanwhile, in December 2013, Mercedes changed the settings of the A-Class suspension. The boss of the compact range, Hansjorg Schinke, explains: „We wanted the A-Class to be particularly a purely sports model, that changes the image of the brand”.

But the CLA is completely different. The frame where the rear axle is set, is flexibly tied up to the body shell. This is how we explain our first impression behind the CLA wheel: the 4-door coupe is obviously more comfortable than the A-Class, even wearing a sports rigid suspension, that goes down by 15 mm at the front and by 10 mm at the rear. Secondly, the general noise level is pretty much reduced for the CLA, more reduced than it is in the A-Class. And this impression is backed up by technology: the CLA windows are thicker, the flock spraying of the engine compartment is better and the suspension is quieter thanks to the flexible tie up we mentioned above. And the wind noise is also reduced thanks to the remarkable aerodynamics. 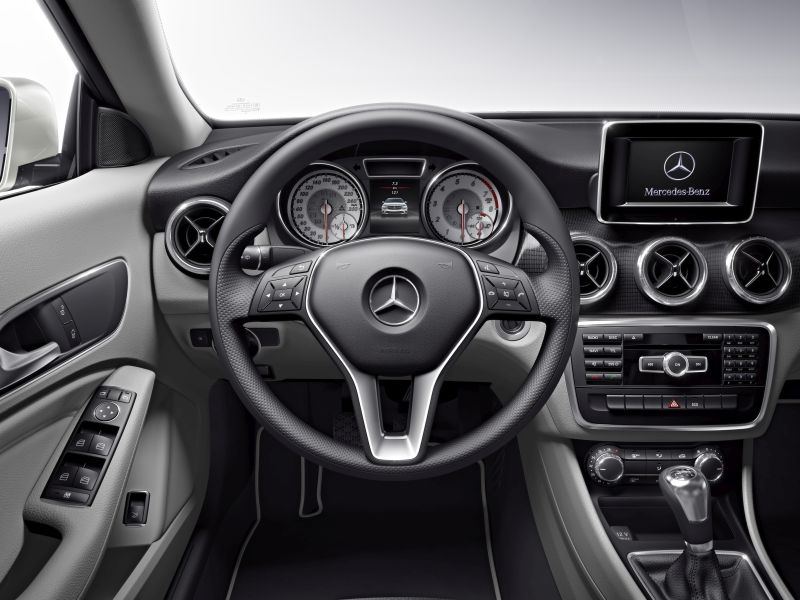 Then would the aftermath be that the CLA has older persons as a target, as it is more „peaceful” than the A-Class? No way! As in the A-Class, the CLA also targets clients who have never owned a Mercedes before.

After the first drive test along the French Riviera, between Saint Tropez and Marseille, we can honestly say that the CLA provides a better compromise for the driving train than the A-Class, but preserves the same sporty genes of the little brother.

The CLA provides a better compromise for the suspension than the A-Class, targetting other client divisions

Apart from the A-Class, the electromechanical power steering Direct Steer comes standard for all versions. It has some important facilities: it countersteers in case of oversteering or corrects the steering during braking on different friction ratio surfaces (miu-split situation).

The CLA 220 CDI seems to be the perfect solution for this compact coupe. The bi-turbo 2,2 litre engine, with front transverse engine is as quiet and refined as the one used for the rear wheel drive models, in which it is longitudinally mounted and the automatic 7G-DGT gearbox fits perfectly within the diesel.

Mercedes claims that the new automatic double-clutch gearbox for the MFA platform (standard for the C 220 CDI and CLA 250 and optional for the CLA 180, CLA 200 and CLA 200 CDI) is very compact and light, as it only has 367 mm in length and 86 kg weight. It lays out three modes: Eco, Sport and Manual, and in the Manual Mode, changing gears, by the help of the shift paddles placed behind the steering wheel, is really fast.

It is great that you can also change gears manually, when the Sport mode is activated, and it comes back to automatic mode if the driver does not manually change gears for 12 seconds. The 2,2 litre diesel is not only powerful and refined, but also very economical. For a particular session on the Sport Mode, it consumed 7,5 l/100 km, and for an economical cruising on the Eco Mode, the fuel consumption could go down to a pretty reduced amount of 5,1 l/100 km.

The petrol version of the CLA 200 is agile, but the 6-speed manual gearbox does not help the 1,6 litre and 156 HP turbocharged engine. The gear ratio is very long, as it can reach 140 km/h at 6000 rpm in the third gear. The drive of the gear lever is long and the changes are pretty slow. In alert driving (there is no Sport mode for the manual gearbox), the fuel consumption goes over 9 l/100 km, but peaceful driving can get the fuel consumption down to 5,8 l/100 km. The economical fuel consumption is thanks to the great aerodynamics (world record of 0,23, even 0,22 for the CLA 180 BE), but also to the long ranging of the 3rd, 4th, 5th and 6th gear of the banjo, to the start&stop system that comes standard for all engines, and also to the relatively reduced weight (1395 kg up against the 1525 kg of the automatic transmission CLA 220 CDI). 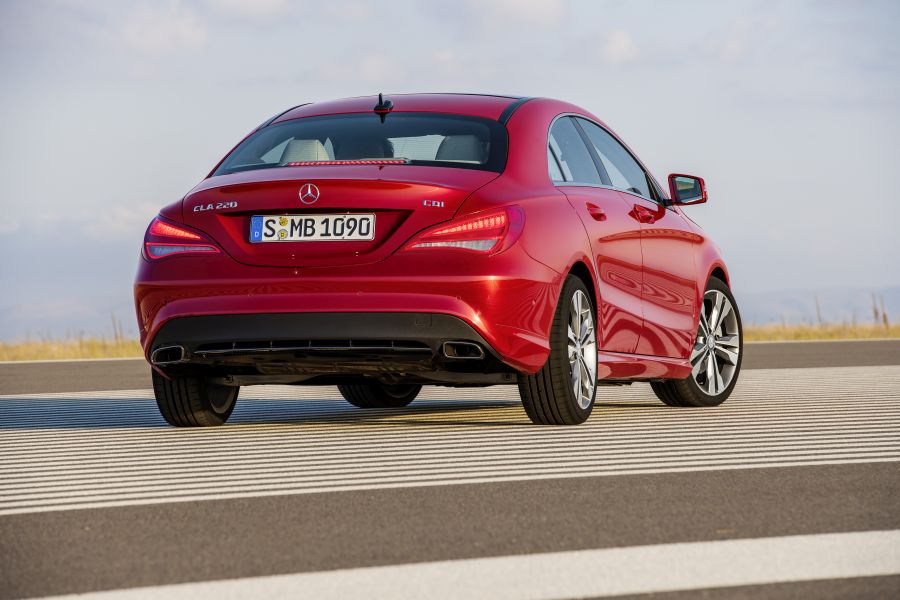 Mercedes offers the new 4Matic system (the name is identical with the bigger-sized models, but the technology is different) only for the CLA 250. The 4Matic system alternatively delivers the power to the front and to the rear between 0/100% and 50/50%, as the allocation of the torque also depends on the chosen mode (Eco, Sport or Manual, with a bigger torque to the rear in the Sport or Manual Mode).

By the help of the 4Matic, traction reserves obviously goes up. No matter the case, even to the limit, the CLA clenches to the asphalt with all wheels and does not skid at all, as the system is as effective as the one used for the bigger-sized models.

Up to its limits, it pushes the front wheels to the exterior and it is a little understeering, an identical reaction with that of the front wheel drive version. The aftermath is that the 4Matic gives a more effective limit haulage, but it is predictable and normal that it does not dilute the small understeering. The 2 litre 211 HP turbocharged engine is vigurous, but the big weight of the car can be felt in the 4-wheel drive with the automatic gearbox.

The new 4Matic raises the traction reserves and weighs less

The CLA is identical with the A-Class down to the A-pillar, which is just as much tilted for both models. From that point on, everything is different, including doors. The CLA is not quite practical: it is relatively narrow at the rear, the opening of the boot is relatively tight because of the 4-door coupe shape, when folding the backseats there is a loading threshold and the width of the boot becomes more narrow at the rear multilink axle. 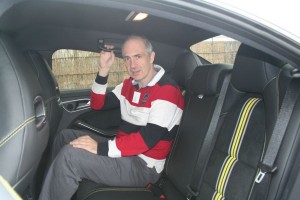 The rear seats are similar to the A-Class one, having the sitting area relatively short. We recommend one of the two options equipment lines: Urban or AMG Line, as both of them come with better configurated sport seats and it’s more pleasant to sit in them during a long distance drive then in the standard ones. The dashboard is identical with the one in the A-Class and the trim is trancendent, but we wished for better fabric for the inferior part of the dashboard and for the central console. This is where we can tell the difference from the new C-Class.

The CLA sets the design above any practical argument, the space at the rear is pretty narrow

Apart from the A-Class, the CLA is better equipped. There is practically no more Style package from the A-Class, as the options in it are incorporated in the basic version. Then there are two options – Urban and AMG Line – but also three design packages – the Exlusive, the AMG Exclusive and the Night package. 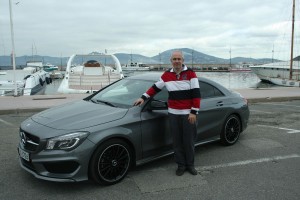 One can opt for an intelligent lighting system (ILS), a Light and Sight package, dual-zone climate control, a panorama sunroof and a Comand unit, that allows complete connection with an iPhone. The assistance systems from the big sized classs are also present and Attention Assist, together with the Collision Prevention System, starting now from 7 km/h (it used to work above 30 km/h) come standard.

The CLA will be exclusively manufactured in the factory in Kecsemet, Hungary, together with the B-Class.

The CLA is in a happy circumstance right now, as it has no direct rival. Being sold for half of the price of the CLS, having an extraordinary design and aerodynamics and a balanced and economical engine range, the success is guaranteed. Therefore, we can skip the little imperfections, which are immanent when a brandnew platform is blossoming.