Drive test E Class: The most comprehensive facelift in history

The new E Class is a key model for Mercedes-Benz in the upper middle class premium segment. After 4 years, E-Class receive a comprehensive update which include the whole range of safety systems available for S-Class in the luxury segment.

The fight for supremacy of the big three luxury car manufacturers is no secret for anyone. On one hand, they have to fight themselves in order to overcome their own records, just like it happened in 2012, when BMW, Audi and Mercedes – Benz (the global sales order) recorded the best year in history. On the other hand, the ranking position was influenced by the different growing rate, over 11% at BMW and Audi compared to approximately 5% at Mercedes-Benz.

Aware of the fact that they are starting to lose in favor of the fresh air brought by BMW and Audi, Mercedes Benz has initiated a spectacular rejuvenation strategy of the range, which led to a new image and, by default, to the increase of market share in the premium segments. The first step was the SUV line-up and we must recall that the M model was, during its time, the first premium european SUV. After that, Mercedes –Benz lost track compared to the multitude of BMW and Audi models from this category. Shortly after, the new A Class was launched and it managed a brilliant start after it left its own niche and joined the direct competition with similar models from the rivals. Concerning the brand image, an important role is played by the four door coupe models, the best example being the CLS, which grows in 2012 three times more than brand itself. As a consequence, the CLA appearance at Geneva wasn’t a surprise. At the same time, while chasing the M line-up from BMW and RS from Audi, Mercedes–Benz has extended the AMG touch in all segments, managing a more attractive feature especially for the young public.

Coming back to the E Class, we can say that it was brand’s weakness in 2012, with a drop of almost 10% compared to the previous year. It’s difficult to find an explanation for this, but one thing was clear – the public target of the segment wanted for something else from brand’s traditional models. Obviously, the reaction came soon enough, and 2013 brought a new E Class in Mercedes-Benz star constellation. It sure is one of the most substantial facelifts from the automotive industry, mostly because Mercedes has invested more than 1 billion Euros in the adjustments made to the E Class line-up. 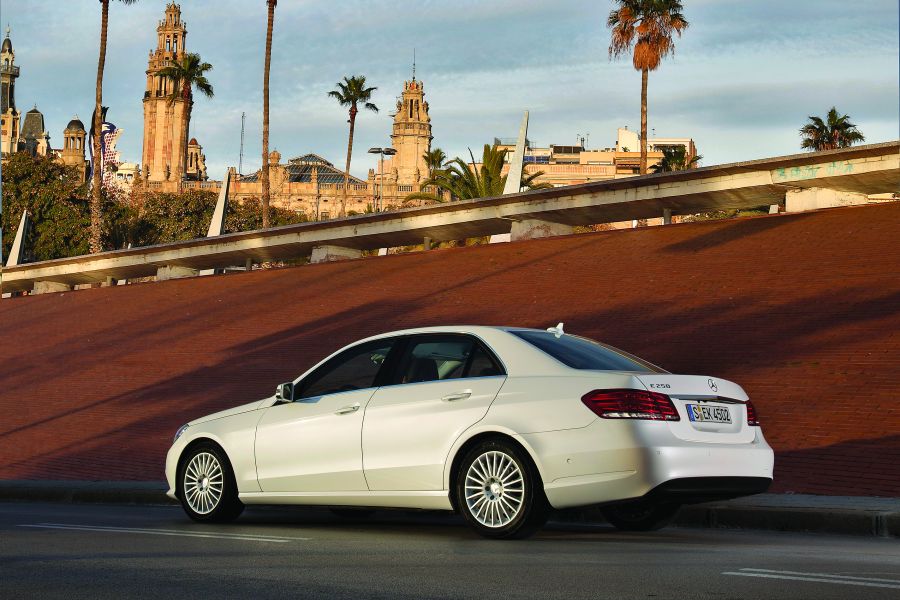 It is not a completely new generation, but it brings some important elements in model’s evolution. In the first place, two pairs of headlamps were discarded, because they were different compared to the rest of the Mercedes-Benz family. Then, the new E Class is different if we compare it to the customs of the automotive industry, where, usually, the last generation systems appear on the most expensive models and they are gradually introduced at the base level of the range. This time, because the company demanded success in the segment where it competes, Mercedes-Benz decided to use all the heavy artillery available. And this is how the new E Class became a genuine technological lab of the family, offering a long list of equipments which are available now also for top model S Class. At the same time, E Class foreshadowed the last S Class.

I must confess that I never liked the image of an E Class with four headlamps. All the models from the last 17 years had something unnatural, that didn’t fit the size, the shape and its specifics. Not by chance, the most spectacular design adjustment was made on the front side. An extreme transformation was possible through combining of the headlamps and other few lines, in a more sport model, despite its gauge. Furthermore, those who want to amplify the performance feel, can select the grille with the oversized star mounted in the middle, supported only by two horizontal louvres, similar to the AMG style. The other have as an option the classic version with four horizontal louvres and the star mounted on the bonnet. The sport image is enhanced by the four air intakes from the bumper, placed right under the registration plate and the headlamps.

From the side, the dynamic character is increased through the two longitudinal lines, plunged to the front side. The main change is giving up to the bulge from the rear wheel arches. This traditional element inspired by old Mercedes Ponton simply does not fit with the modern lines. Concerning the overall shape, the rear was not radically changed, only the bumper acquired some sporty cues. Instead, the new headlamps rejuvenate the whole assembly image.

At the interior, the changes are difficult to notice. The most visible is the new dashboard, with a smaller number of dials, from five to three. Otherwise, the rounded corners for the air vents and the analogue clock from the middle of the center console enhance the general idea of elegance. Also, the finishes suit everyone, from the classic veneer layout to the most modern aluminum.

The Mercedes-Benz officials are very proud of what seems to be a return from the future, more exactly, the introduction on the new E Class of various systems which are also available on the S Class. The basis for the new modern assistance systems is the new sensor generations and the all the afferent algorithms. An important role is played by the multi-role, double camera, placed close to the rearview mirror on the windscreen. This scans two sectors at 45 degrees and it provides a three-dimensional image of everything that happens within a 50 meters range area in front of the vehicle. At the same time, all E class models come standard with Attention Assist (it detects driver’s lack of attention and it advises on the fatigue level) and with Collision Prevention Assist. 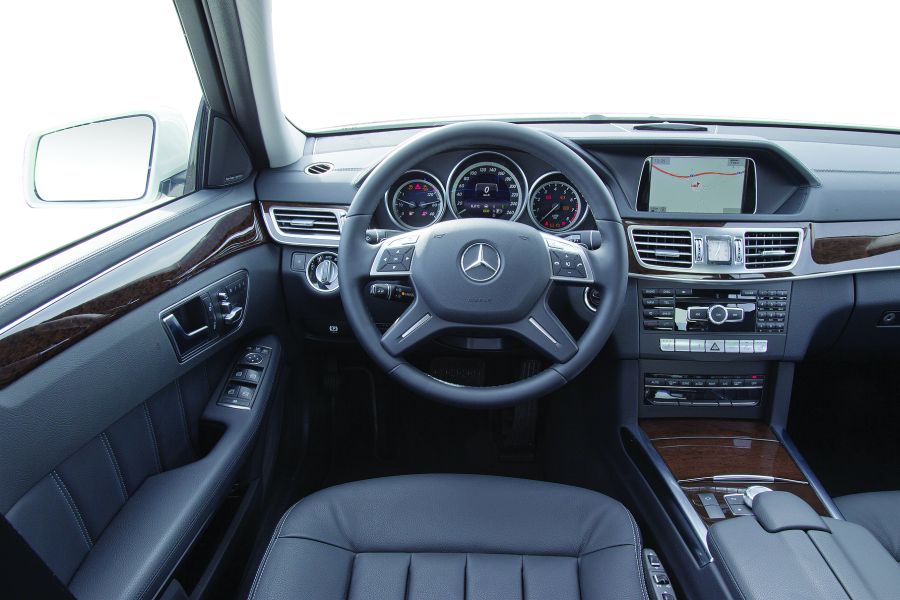 Distronic Plus helps avoiding a collision with a vehicle in front, Brake Assist Plus together with Junction Assist detects any obstacle that may be encountered at the crossroad and increases braking efficiency, Pre-Safe Brake automatically brakes if necessary at speeds up to 50 km/h. Interesting is that, at the same time the Active Lane Keeping Assist system detects if the contiguous lane, the one towards the car heads to, is occupied or not (including the lane for the cars coming from the opposite direction). If there is any risk of collision, the system maintains the vehicle on the lane, breaking the wheels only on one side. The sensation is odd and it makes you wonder who actually drives the car.

With this very comprehensive and expensive facelift, Mercedes succeed to upgrade E Class at the level of competition especially regarding safety level and engine range. And with the new face with only two headlamps and by giving up to the bulge from the rear wheel arches, E Class is not only more dynamic but looks more dynamic.