Drink and drive – Not a good idea, even if you drive a Mercedes!

Mercedes-Benz accident in Belarus
Elena Luchian, February 25, 2015
3.41K 0
Home Lifestyle Drink and drive – Not a good idea, even if you drive a Mercedes!

Once again, the safety of the Mercedes-Benz cars is proven. And in a harsh way! A drunk driver from Belarus smashed his Benz into a street pole, full speed ahead. He completely trashed the Mercedes, that caught fire right after the impact. But – as surprising as it may seem – he came out of it alive.

It is definitely illegal, immoral and sometimes irrecoverable to drink and drive, even if your ride is a Mercedes-Benz. A driver in Belarus did not think of that for a second!

The accident happened this past Friday in Minsk, at 5 in the morning. According to the traffic police, a 22-year old driver lost control while switching direction in the intersection. His car slid on the frosty pavement and hit against an electricity pole on the side of the road.

Scared and allegedly drunk, the driver fled from the accident scene. But he was found after industrious investigation and has been detained by the police. The police found out the driver was not alone in the car at the moment of the crash. A 1991 born passenger who was seating on the side of the impact, also survived the accident. He was admitted to hospital for a hip fracture, the Minsk Police informed.

It is not the first spectacular accident this year, with a Benz involved. By the beginning of 2015, in China, a drunk driver of a Mercedes-Benz G-Class did not miss a single car he came across. 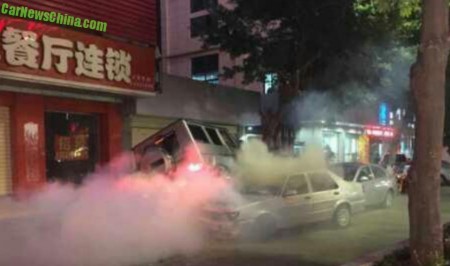 Read here all about the accident in China!

And the end of 2014 was bitter for a Mercedes driver who was completely innocent. While waiting for the traffic light to turn green, a Lamborghini Aventador gave him a little push. It may look a bit hilarious, but who know the damage the Mercedes might have suffered underneath? 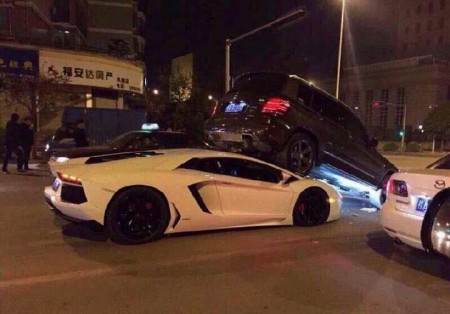