Drink and drive and lucky to be alive. Teenager crashes daddy’s Mercedes

Drunk, young, with his license already suspended and with a powerful car at hand. That is the worst combination on the road. An Australian teenager smashed dad’s Mercedes-Benz on the highway.

Daddy’s going to go bananas when he sees this. His drunk son, who had already got his license suspended after another drink-and-drive incident, crashed into a power pole, hit a Toyota SUV, slammed into a water pipe, bounced into a construction site and then came to a stop at the base of a cliff. It all happened at 3:30 in the morning, when the naughty son was trying to get back home from a bar.

A taxi driver going home after the night shift was barely missed by the foolish driver. 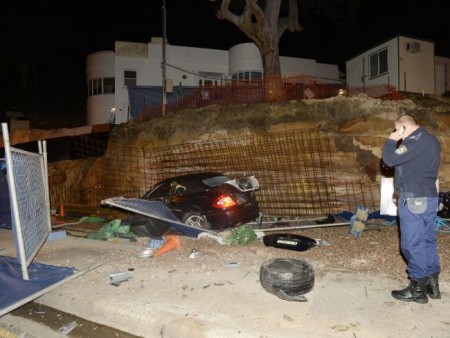 “He is lucky to be alive”, said the authorities, who charged him for driving on a suspended license and drink-driving.

The noise woke up everyone living in the area and made them ask how in the world the kid got out of the car unharmed. Well, the car is – used to be, actually – a Mercedes-Benz. His parents rushed to the crash scene in their pyjamas and watched what was left of their car in horror.

“He lost control. Then he just kept coming with his car. He came in front of us, we were coming from the other way and he was going so fast. We were very close, we were lucky we were concentrating on the road and hit the brake to avoid him”, said the taxi driver. 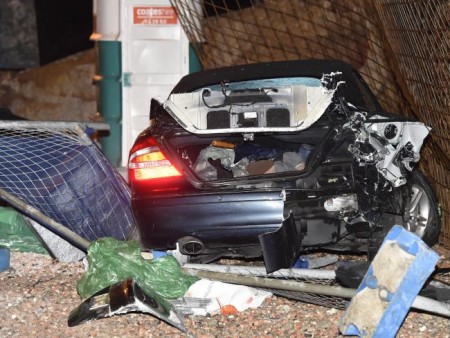 The driver of the Toyota SUV had no idea what clipped her: „I could not see what it was, I just saw one black thing coming from the other side of the road and I hit the brake quickly”, she told.

The authorities needed to close down two lanes of the highway for two hours to clean the tires, parts of the wheel axle, fragments of the boot and a front panel of the black Mercedes, spread across the road. The power pole he had hit was also knocked down in the big bang. 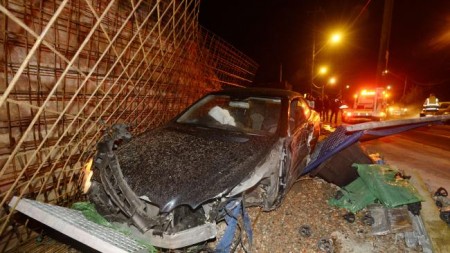 One hour after the crash, another incident happened in the very same place, as a car was read ended as it slowed without warning to check out the accident scene.

It sounds like a busy September for the teenager prick. He is due to appear in the Local Court on September 17.